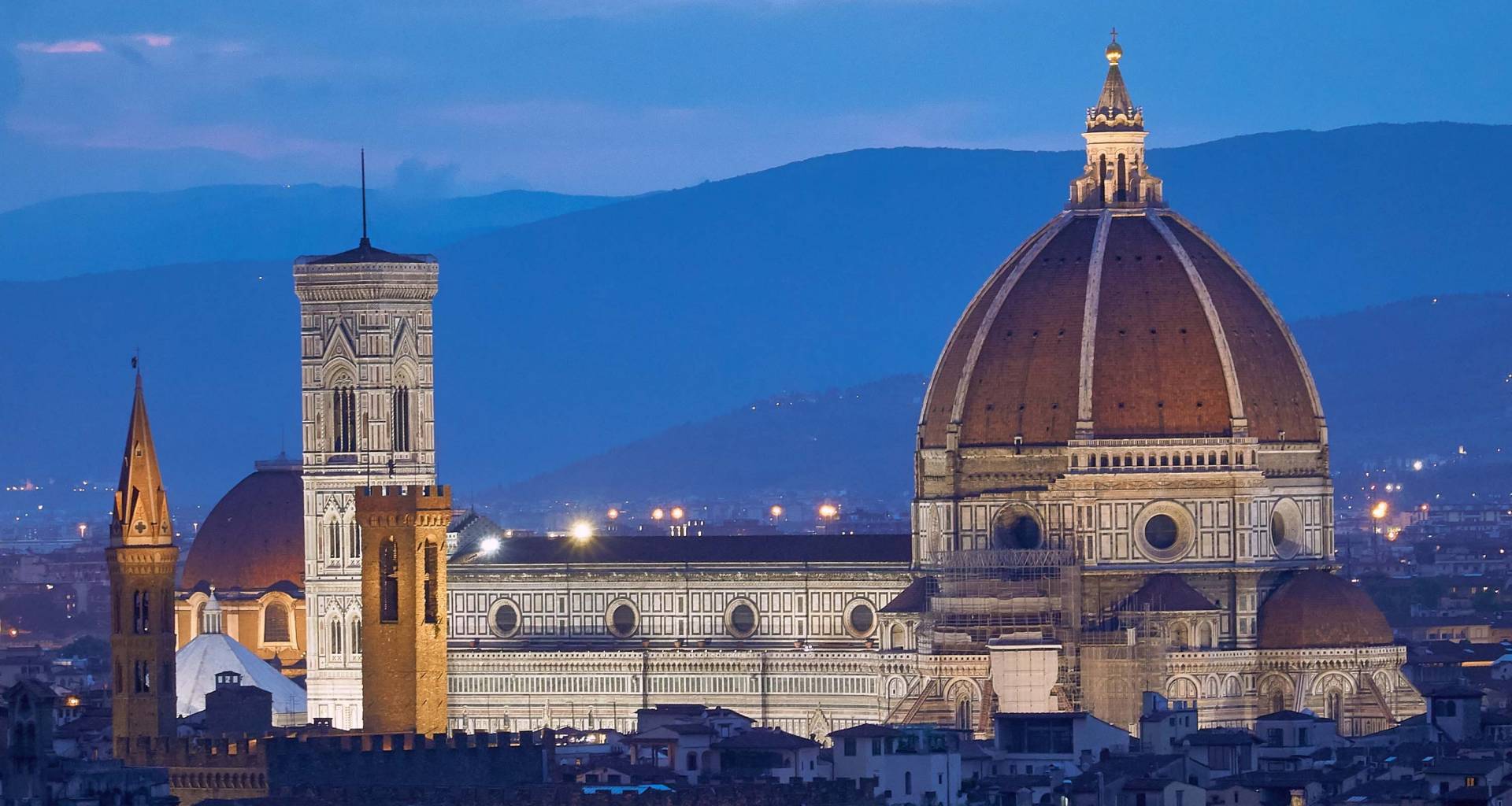 Through computational methods, researchers from Princeton and the University of Bergamo have mathematically proven the structural physics at work in domes such as Santa Maria del Fiore in Florence, Italy. Santa Maria del Fiore, a World Heritage site, is the largest masonry dome standing today.

Photo by Mark Boss on Unsplash

What can modern engineering learn from an erstwhile jeweler who built the largest masonry dome in existence? The construction of the Florentine duomo by Filippo Brunelleschi has been an engineering marvel for more than 500 years, showcasing ancient techniques that still hold valuable insights for modern engineering. Until now, it has remained a mystery how the master goldsmith and sculptor managed to build the masterpiece that pushes the limits of what is possible to construct even with modern building technologies, and how the masters who followed Brunelleschi carried on the tradition. 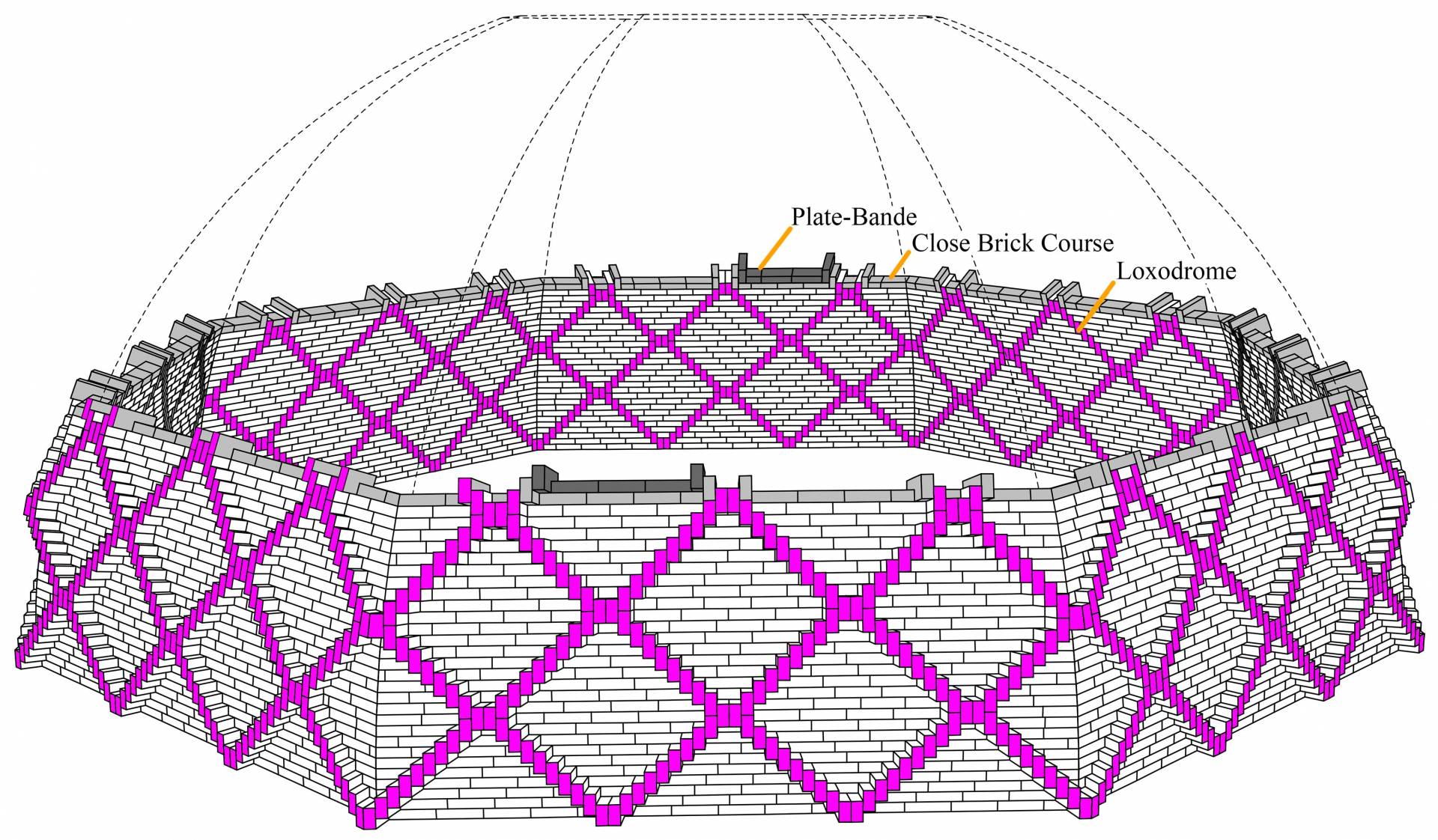 The double loxodrome is made up of rows of vertical bricks that crisscross around the dome and are filled in by horizontal bricks. Effectively, each course of bricks creates a structural element known as a plate-bande that wedges interior bricks between the vertical end caps.

In a collaborative study in the July 2020 issue of Engineering Structures, researchers at Princeton University and the University of Bergamo revealed the engineering techniques behind self-supporting masonry domes inherent to the Italian Renaissance. Researchers analyzed how cupolas like the famous duomo, part of the Cathedral of Santa Maria del Fiore in Florence, were built as self-supporting, without the use of shoring or forms typically required.

“Nothing is more moving,” said Attilio Pizzigoni, co-author of the study, “than reading the lightness of the heavens in stone, in an absolute and simple form such as that of the Florentine cupola.”

Sigrid Adriaenssens, a professor of civil and environmental engineering at Princeton, collaborated on the analysis with graduate student Vittorio Paris and Pizzigoni, a professor of engineering and applied sciences, both of the University of Bergamo. Their study is the first to quantitatively prove the physics at work in Italian Renaissance domes and to explain the forces that allow such structures to have been built without formwork typically required, even for modern construction. Previously, there were only hypotheses in the field about how forces flowed through such edifices, and it was unknown how they were built without the use of temporary structures to hold them up during construction.

For Adriaenssens, the project advances two significant questions. “How can mankind construct such a large and beautiful structure without any formwork — mechanically, what’s the innovation?” she asked. Secondly, “What can we learn?” Is there some “forgotten technology that we can use today?” 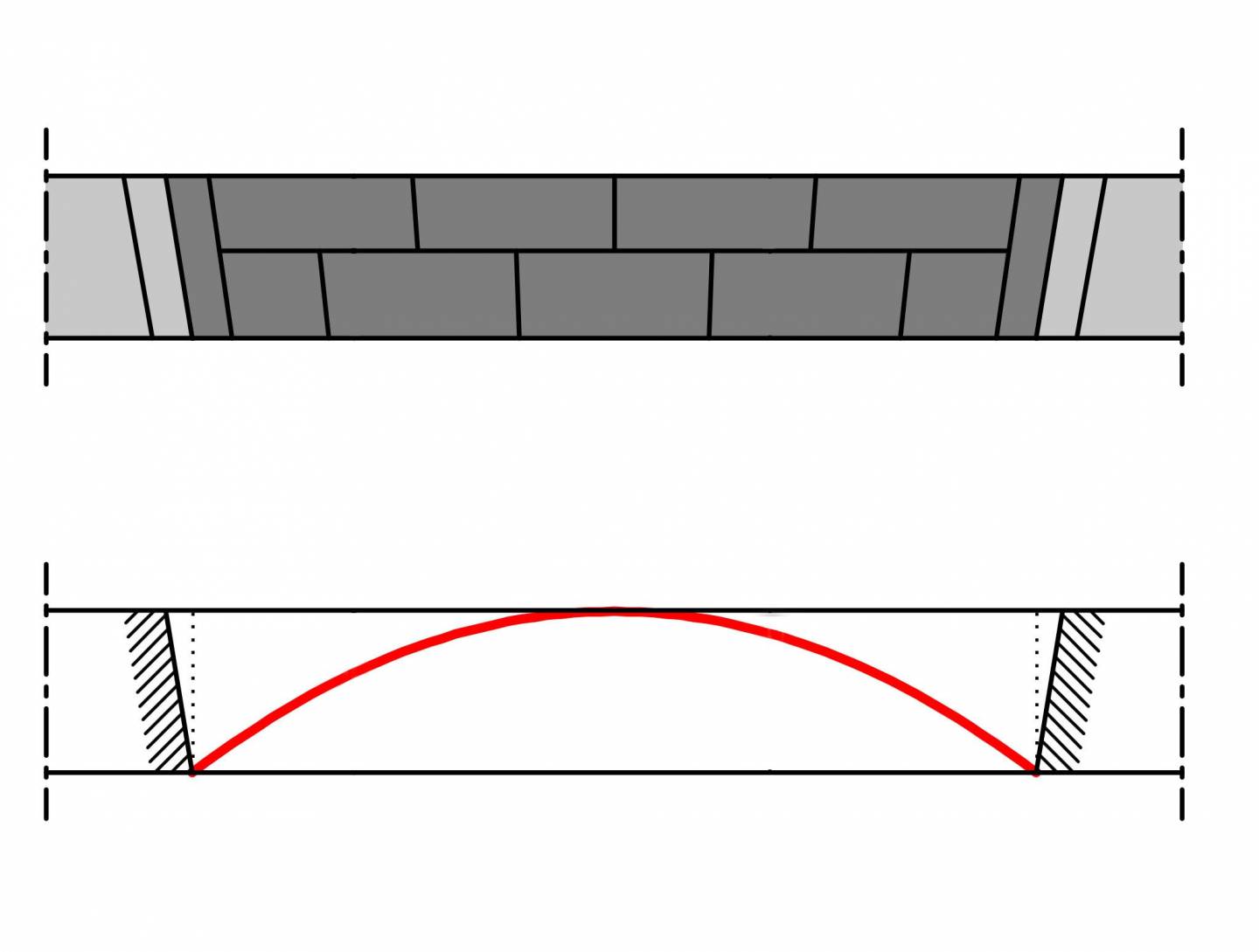 The plate-bande is the integral element that distributes force throughout the dome, maintaining the shape and stability of the structure

The detailed computer analysis accounts for the forces at work down to the individual brick, explaining how equilibrium is leveraged. The technique called discrete element modeling (DEM) was used to analyze the structure at several layers and stages of construction. A limit state analysis determined the overall equilibrium state, or stability, of the completed structure. Not only do these tests verify the mechanics of the structures, but they also make it possible to recreate the techniques for modern construction.

The researchers said the results could be especially useful in cases where remote construction, by drone for example, could be done with minimal temporary supports. “With these studies,” said Pizzigoni, “we aim to approach moments in history when the sole form of technology available to man was the abstract rationality of geometry. […] What we as designers, architects and builders can learn from the past is the knowledge of a structural equilibrium of form based on the geometry of materials and of their reciprocal measurements in three-dimensional space.” 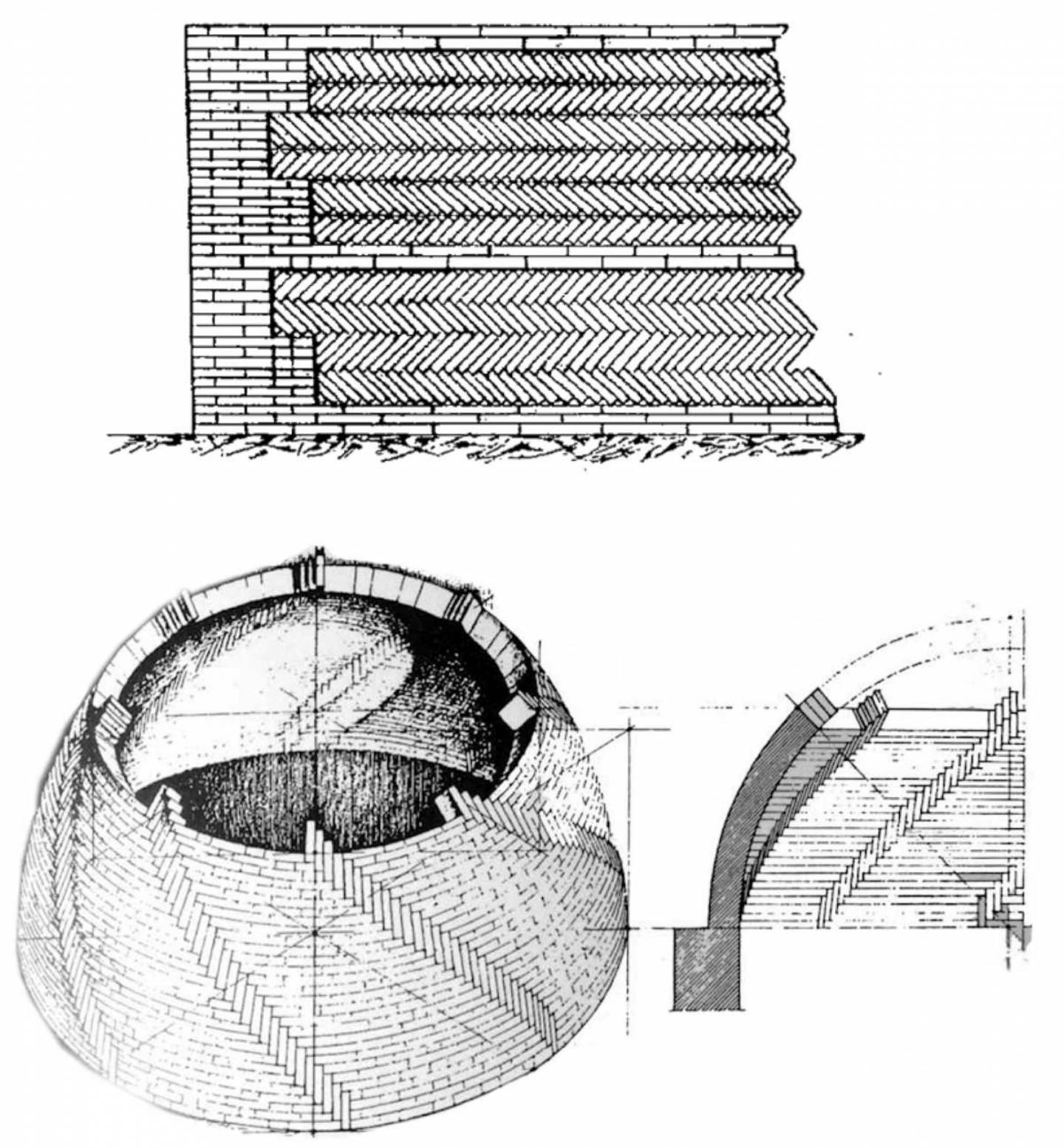 An ancient Roman technique used in walls and hearths called opus spicatum resembles the single loxodrome used by Brunelleschi in the Florentine duomo.

Verifying the physics of the dome

The specific structure that the team studied was Santa Maria, in Ciel d’Oro, of Montefiascone, Italy. The crux of their analysis rests on the geometrical pattern of bricks used throughout the interior dome, which appears to be the lynchpin vital in making the structure self-supporting. The bricks form a herringbone, a V-shaped pattern, between the horizontal field bricks and vertical bricks at the beginning and end of the horizontal rows. The arrangement creates lines of staggered vertical bricks that extend diagonally across the curvature of the dome.

The arrangement produced is a complex cross-herringbone spiraling pattern. One herringbone from both the left and right angles repeatedly cross each other, providing stability for the interior bricks and maintaining the dome’s curvature. The researchers’ analysis showed essentially that this is a double-helix of support that distributes and equalizes weight and thrust within the structure. This system of cross-herringbone veins is known as a double loxodrome.

Each course of horizontal bricks pushes outwards on the vertical herringbone bricks, forming rows of plate-bandes, or straight arches inside the double loxodrome. The physical thrust of the horizontal bricks toward the vertical bricks keeps the horizontal bricks in place during construction and provides stability to the entire structure once completed. This is the key to the dome’s stability. One of the researchers’ primary findings is that for domes with radial geometry, the herringbone brick pattern enables the bricks to be wedged as plate-bandes and not slide inwards, which would make the dome collapse.

The simple yet ingenious physics exhibited by the structure “is an elementary act that transforms the amorphous and inert material into a sign of life that [motivates] the tensions between opposing forces and composes them in their equilibrium,” said Pizzigoni. Italian Renaissance domes are an architectural form that “recognizes the disciplinary complexity” of blending the ideals of “stability, beauty and utility, that runs between engineering, construction and architecture,” he said.

From ancient to modern construction

While the physics of the structure are no longer grounds for considerable debate after this computational verification, the historical origins of the herringbone technique remain unexplained. Since Brunelleschi did not leave behind drawings or construction notes, some researchers attribute the technique to an influence from Arab and Byzantine domes. For example, the Friday Mosque (Masijid-i Jami’) of Ardestan in Isfahan, Iran, was built with the technique circa 1088 C.E., a century before the construction of the Santa Maria del Fiore’s dome in Florence.

Others regard the origins as a derivation of the Roman technique called opus spicatum, wherein bricks are tightly laid in a herringbone pattern without requiring much mortar. Such brick patterns were commonly used in ancient Roman and medieval firebacks in stone hearths to prevent corrosion of lime mortar that occurs with exposure to heat and flame or as field bricks in walls to increase stability.

In the Florentine duomo, Brunelleschi only used a single helix, so the lines of vertical bricks do not cross one another. Instead, they simply remain parallel, as they do in opus spicatum. This does not affect the stability of the structure, and the physics of the plate-bande are still the integral element that allows for the height, size, and stability of the Florentine duomo, as well as enabling construction without formwork.

The team hopes to resurrect these forgotten techniques in the present. "Perhaps the most intriguing aspect of such studies," said Pizzigoni, "is a rethinking of a future determined by building techniques abandoned by mechanical science." The researchers anticipate that this study could have practical applications for developing construction techniques deploying aerial drones and robots. Using these unmanned machines for construction would increase worker safety, as well as enhance construction speed and reduce building costs.

Another advantage of unearthing new building techniques from ancient sources is that it can yield environmental benefits. "The construction industry is one of the most wasteful ones, so that means if we don't change anything, there will be a lot more construction waste," said Adriaenssens, who is interested in using drone techniques for building very large span roofs that are self-supporting and require no shoring or formwork.

"Overall, this project speaks to an ancient narrative that tells of stones finding their equilibrium in the wonder of reason," said Pizzigoni, "from Brunelleschi’s dome to the mechanical arms of modern-day robotics where technology is performative of spaces and its social use." 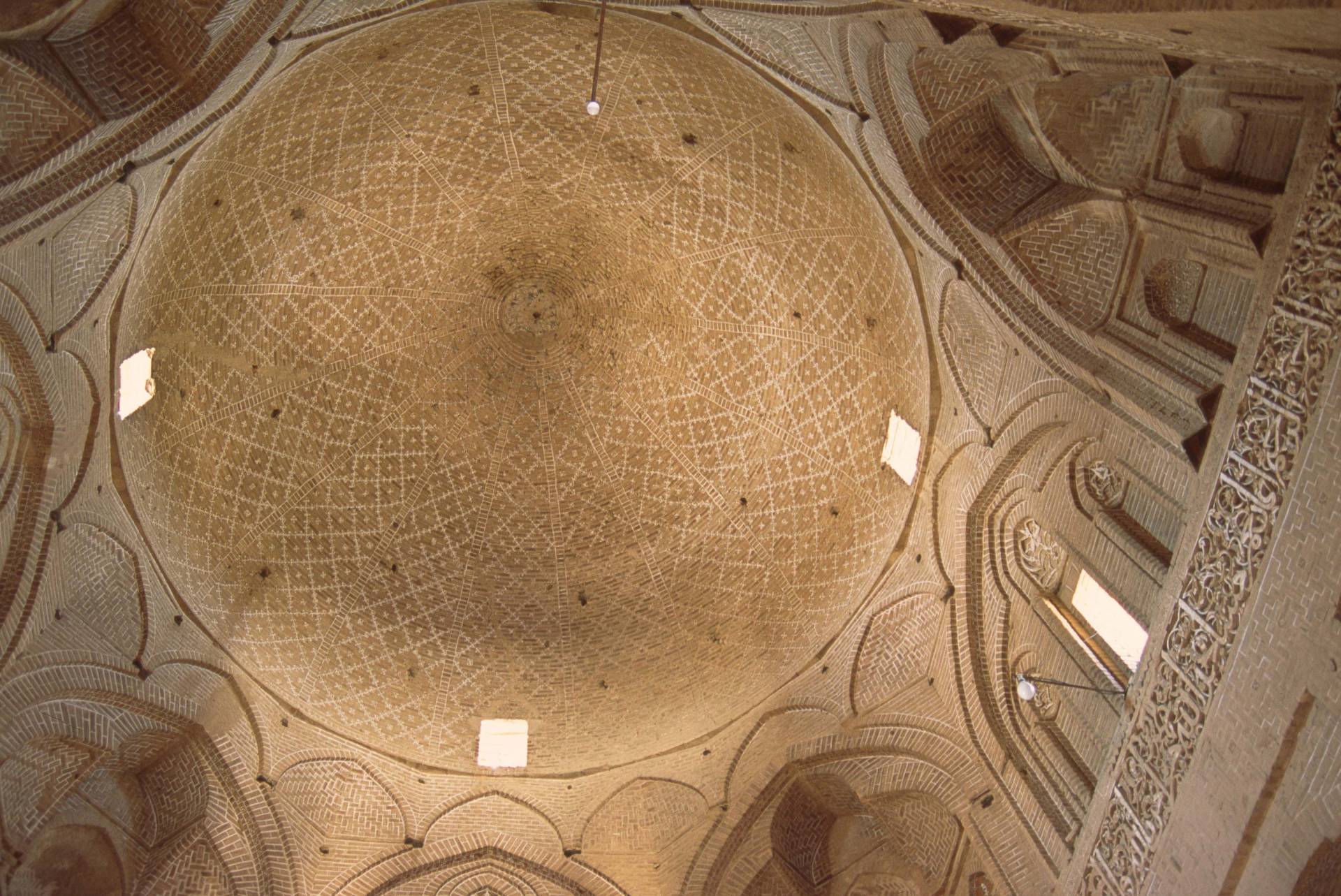