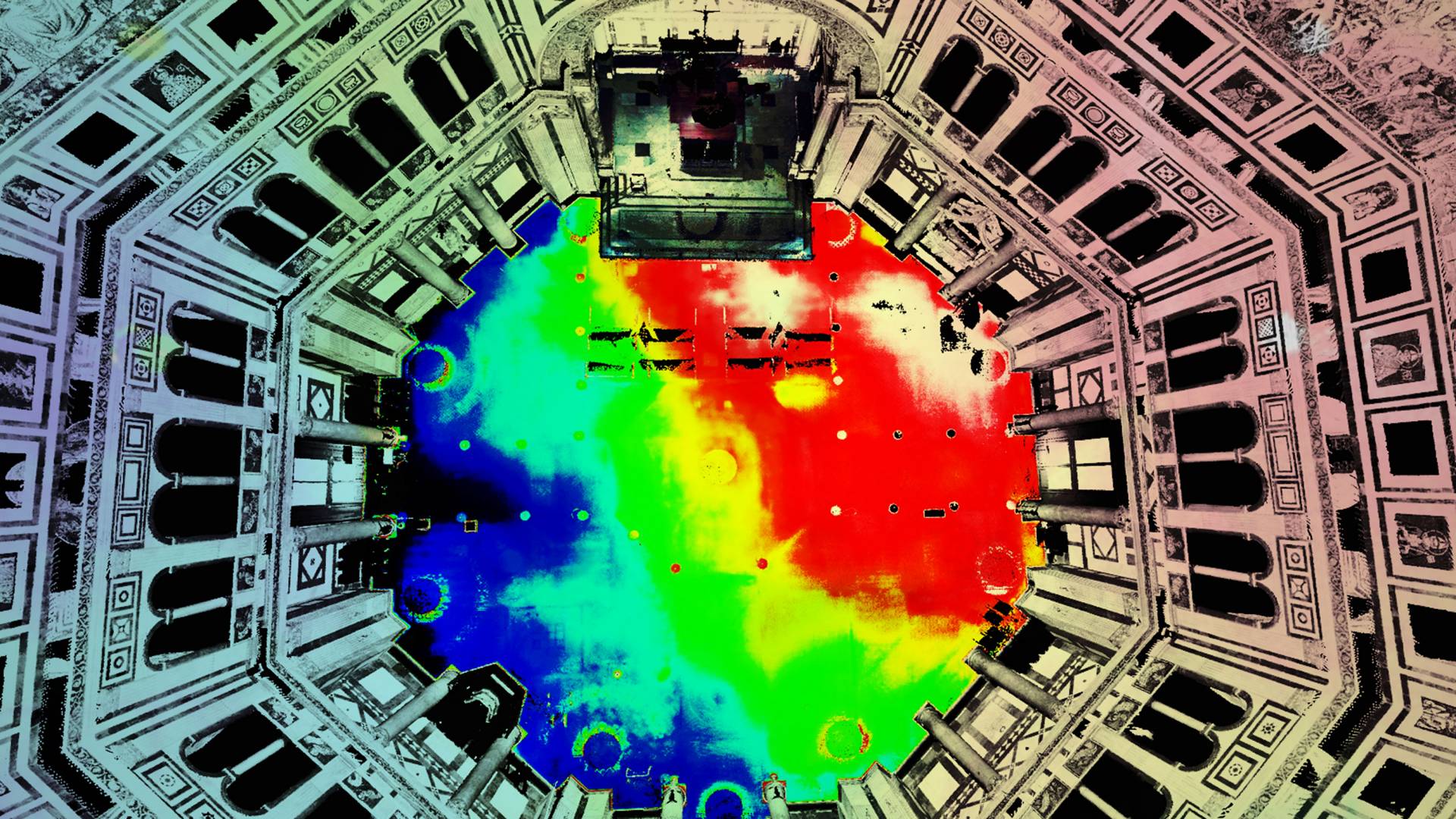 A team of structural engineers from Princeton University and the University of California-San Diego use thermal imaging in combination with other assessment methods to create models of historic structures such as the Baptistery di San Giovanni in Florence (shown). These models help to non-invasively detect the cause of structural damage to buildings, which focuses preservation efforts and makes the best use of precious preservation resources for World Heritage sites around the globe.

Italian Renaissance frescos of the gods and goddesses of air, water, fire and earth enliven the ceiling and four walls of the Room of the Elements in Florence’s famed Palazzo Vecchio, but without structural engineers’ work to preserve such historic buildings, the world could eventually lose these masterpieces.

Art such as frescos and mosaics are often inherent parts of the buildings that house them, making them vulnerable to the damage inevitably faced by aging structures. To save the works, researchers from Princeton University and the University of California-San Diego are using non-invasive technology to protect them, while preserving the buildings in which they stand.

The work is part of a broader effort to analyze and protect two Italian UNESCO World Heritage sites in Florence, the Palazzo Vecchio and the Baptistery di San Giovanni. In a January 2019 article published in the journal Heritage, the researchers describe the method for the Palazzo Vecchio, which integrates non-destructive evaluation with physics-based modeling techniques for damage assessment of historic structures. They describe experimental testing in a subsequent paper, and describe applying their techniques to the Baptistery in their March 2019 article.

Previous approaches to structural assessment used combined techniques to model damage, but only in cases where the probable cause of the deterioration was known. For the first time, the Princeton team used combined techniques to estimate the probable cause of cracking and provide a quantitative structural assessment of historic architecture. Dominique Rissolo, assistant research scientist at UC San Diego, who was not involved in the project, said “the application of engineering tools to the study of heritage structures is uncommon, making this work truly groundbreaking.” 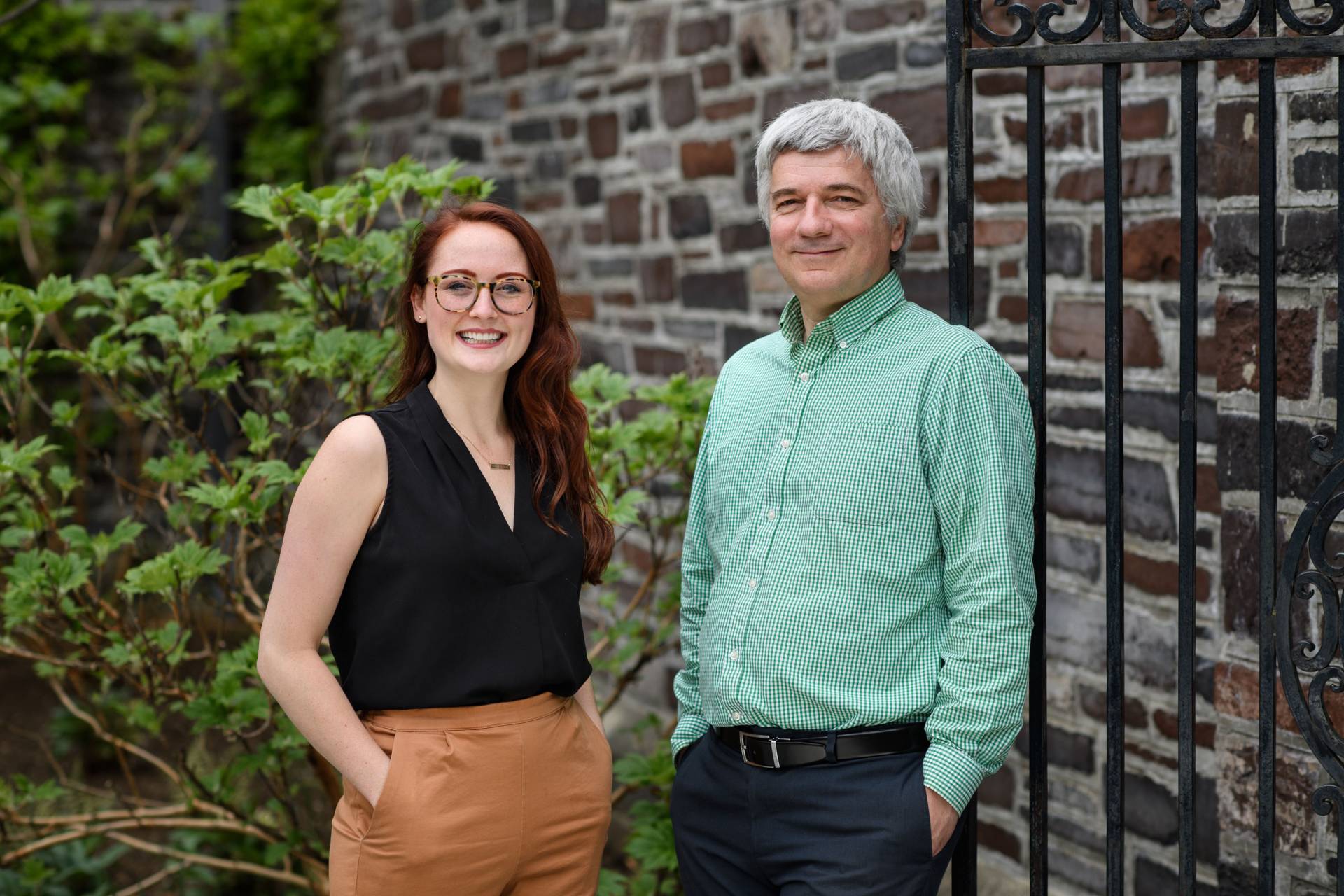 The research team consists of Rebecca Napolitano, a graduate student in civil and environmental engineering, as well as her adviser, Branko Glišić, associate professor of civil and environmental engineering, both of Princeton. Michael Hess, senior engineer and 3-D imaging specialist at Altiiq, LLC and a former graduate student at UC San Diego, was a collaborator on the two case studies.

The Room of the Elements in the Palazzo Vecchio is part of the private quarters of Cosimo I de Medici, Grand Duke of Tuscany. At this site, the researchers applied quantitative forensic methods using a modeling approach that combined information from four types of data — laser scanning, photo assessment, mapping existing cracks, and thermal sensing to create the 3-D reality-based models of possible causes for the damage.

Laser scanning of the walls allowed for precise measuring of small fissures. Photo assessment of the walls created maps that showed visible fractures and revealed damage patterns. Thermal sensing made it possible to visualize harm that was not apparent on the surface, which was crucial in this case, considering the walls were swathed with priceless 16th-century frescos painted by Giovanni Battista del Tasso, Giorgio Vasari, Cristofano Gherardi and Marco Marchetti da Faenza.

After integrating this data, the researchers created the computer models that depicted possible causes for the damage. In this case, the researchers compared five computer simulations to see which scenario offered the best explanation for the existing crack patterns.

These structural forensic techniques are similar to a game of engineering, Clue, in which the computer models offer different possible scenarios for the damage that are then tested against reality to find the closest match. For the Room of the Elements, the researchers tested settlement from three directions, as well as the dead load, or weight of the structure itself, as possible causes for the crack patterns.

When comparing the multiple computer models with reality, the researchers could modify variables to create more precise conditions. For example, within the Palazzo Vecchio, it became clear that the crack patterns were formed by structural settlement from the middle of the wall. With this information, they then refined the model by increasing the magnitude of settlement that was occurring from that direction.

The researchers believe that these techniques can be used to preserve other historic structures such as the Forbidden City in China. Rissolo said the research “will impact the field far beyond the study Renaissance structures in Italy, transforming our approach to diagnostics and subsequent intervention by conservation specialists.”

In this project, the team sharpened their quantitative assessment techniques. They digitally compared the computer models with the real damage patterns and dimensions to create contour plots. These plots enabled the engineers to be more rigorous and quantitative in their evaluations, which can make preservation efforts more specific and cost effective.

“Just from being able to diagnose the cause more specifically, you can direct the funds much more efficiently,” Napolitano said, noting that preservation projects are often underfunded. She strives to “bring more rigor and quantitative analysis to preservation,” with the goal of supporting “a more optimized and actionable plan" for such work.

The quantitative assessment methods employed in both case studies were experimentally tested, since making the process more exact and predictive is a central goal for the research. To empirically test the assessment methods, Napolitano built several physical walls for experiments.

All three studies were conducted through Glišić’s Heritage Structures Lab, which aims to protect World Heritage sites through structural engineering analysis. Previous projects have analyzed Trajan’s bridge and the Taj Mahal. Looking into the future, Glišić believes that their structural forensics techniques can be combined with machine learning tools to help preserve both historic and modern architecture.

“What I find very interesting in this Heritage Structures Lab,” said Glišić, “is that the work involves solving some engineering challenges in archaeology, and as a consequence of solving those problems, actually opens new questions in engineering.”

This work was supported in part by the Council on Science and Technology and Princeton University’s Dean’s Fund for Innovation. Additional support was provided by the Kinsella Fund, the Qualcomm Institute at UC San Diego, the friends of CISA3, and the World Cultural Heritage Society. These projects are also based on material sponsored by the National Science Foundation Graduate Research Fellowship.