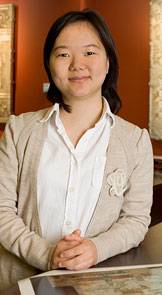 For her senior thesis, computer science major Hijung (Valentina) Shin has developed a technique to simulate how ancient art was destroyed. Shin hopes that her thesis project will benefit archaeologists who are working to reconstruct frescoes painted thousands of years ago.

For her senior thesis, computer science major Hijung (Valentina) Shin has developed a technique to simulate how ancient art was destroyed. Shin hopes that her thesis project will benefit archaeologists who are working to reconstruct frescoes painted thousands of years ago.

Destroying ancient Greek art has become something of a specialty for Hijung (Valentina) Shin.

For her senior thesis at Princeton, Shin, a computer science major from Yongin, South Korea, is working to perfect her method for shattering stone frescoes painted thousands of years ago -- a technique designed to return the art to its former glory.

"I'm actually breaking things inside a computer," she said. "If we can simulate how the art was destroyed, it will help us piece the shards back together again." 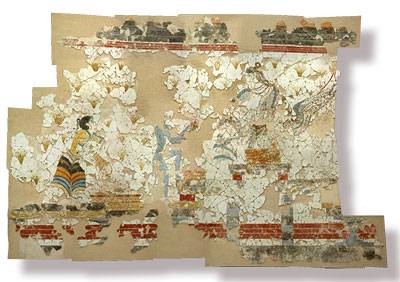 The artworks in question were frescoes found on Thera, an Aegean island also known as Santorini that was devastated by a volcano around 1650 B.C. The eruption destroyed the island's Hellenic civilization, including the frescoes painted on town walls, burying the remnants for millennia.

In recent decades, archaeologists have begun excavating the ancient ruins, but face the daunting task of sorting through the debris and reconstructing the frescoes one shard at a time. Shin's project developed as part of an effort by Princeton computer scientists to aid these archaeologists in their work. 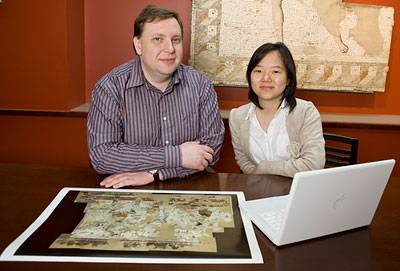 Shin's thesis builds upon her previous contributions to a Princeton-led project that involved creating a laser-based scanning system to record measurements of the shape, size and color patterns of ancient fresco fragments. The project was led by Szymon Rusinkiewicz (left), an associate professor of computer science. (Photo by Brian Wilson)

In 2007 a group from Princeton traveled to Akrotiri -- a site on Thera that had flourished in the Late Bronze Age, around 1630 B.C. -- to begin studying the methods used by archaeologists to piece together the fresco fragments unearthed at the site. The group led by Szymon Rusinkiewicz, an associate professor of computer science, invented a laser-based scanning system to record measurements of the shape, size and color patterns of the shards.

Since then, the archaeologists have used the system to scan newly recovered fragments, and the Princeton team has continued developing ways to use the data to help the conservators find matches among the plethora of pieces.

Shin began contributing to the project for her junior independent work, under the guidance of Rusinkiewicz and Thomas Funkhouser, a Princeton professor of computer science. Her research expanded into her senior thesis project, which Funkhouser is advising.

Last summer, Shin traveled to Greece to meet with the archaeologists and learn the process of scanning and reconstructing the ancient art. She quickly discovered that computer scientists and archaeologists think differently.

"With computers you focus on speed, because you want programs as efficient as possible to improve processing time," she said. "But archaeologists work on a single fresco for decades, and they say the reconstruction of Santorini will take centuries. One of them told me the work is like a long beaded necklace, and their contribution is a single bead. That really surprised me."

At first, Shin focused on studying a reconstructed Theran fresco known as the "Crocus Gatherer and Potnia," which depicts a supplicant offering crocuses to a goddess. She analyzed the crack patterns for clues to how the wall originally crumbled. This allowed her to make generalizations, based on statistical relationships among the fragments, about how any fresco would have deteriorated. 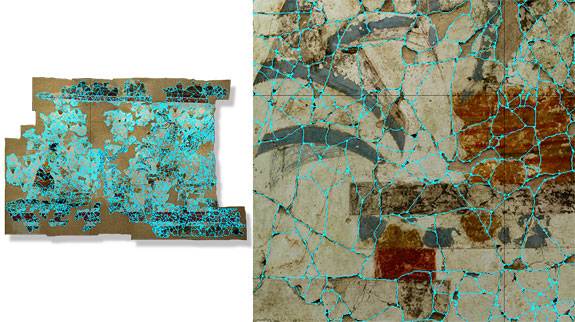 For her thesis, Shin is using data collected during her junior independent work to develop a mathematical model that describes how ancient frescoes broke apart after a volcanic eruption. Using a computer program that traced the crack patterns in the reconstructed artwork (shown in blue), Shin has been able to obtain clues as to how the wall originally crumbled. (Image by George Papandreou)

"Imagine you have puzzle pieces strewn across a table and you want to figure out a way to put them back together," Funkhouser said. "Valentina took pictures of an already assembled puzzle and got statistics about how the pieces fit together."

Now, for her thesis, Shin is using the data she gathered as a junior to develop a mathematical model that describes how the Theran frescoes broke apart after the volcanic eruption, depending on their size, the materials of which they were composed and the forces that shattered them.

She is testing her model using modified graphics software originally developed for simulating cracks in digital images and movies. Using the simulator and the rules she's developed, she repeatedly breaks a virtual version of the "Crocus Gatherer and Potnia," then compares the result with the actual crack patterns in the reconstructed fresco.

Her goal is to refine the simulation so that it more closely matches reality, then to use her algorithm to guide how archaeologists on Thera make matches and to speed the process of recreating the frescoes.

"I really liked working on a project where I could actually see the outcome," she said. "I'm planning on going to graduate school and this influenced the direction I'd like to go. I want to study how people perceive things -- like matching two shards together -- and how to apply that to computers to help identify objects."

More generally, the independent nature of the research taught Shin about the creativity it takes to tackle a novel problem.

"In classes, I was used to working on problems that had a clear answer," she said. "But more and more, as I worked on this, I realized that we didn't know the answer, or even if we were asking the right question. That was exciting."