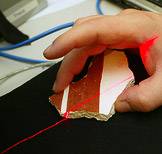 A team of Princeton computer scientists has developed an automated system for reconstructing an excavated fresco, mosaic or similar archaeological object. Collaborating closely with archaeologists in Greece, the team has created a system that employs a combination of powerful computer algorithms and a processing system mirroring the procedures traditionally followed at excavation sites. Here, a fragment is placed on a turntable and a laser rangefinder measures its visible surface from various viewpoints. (Photo: Frank Wojciechowski)

Click to play a video on the "virtual archaeologist" project.

For several decades, archaeologists in Greece have been painstakingly attempting to reconstruct wall paintings that hold valuable clues to the ancient culture of Thera, an island civilization that was buried under volcanic ash more than 3,500 years ago.

This Herculean task -- more than a century of further work at the current rate -- soon may get much easier, thanks to an automated system developed by a team of Princeton University computer scientists working in collaboration with archaeologists in Greece.

The new technology "has the potential to change the way people do archaeology," according to David Dobkin, the Phillip Y. Goldman '86 Professor in Computer Science and dean of the faculty at Princeton.

Dobkin and fellow researchers will report on their work in a paper they present Friday, Aug. 15, in Los Angeles at the Association of Computing Machinery's annual SIGGRAPH conference, widely considered the premier meeting in the field of computer graphics.

"This approach really brings in the computer as a research partner to archaeologists," said Dobkin, who got the inspiration for the project after a 2006 visit to the archaeological site of Akrotiri on the island of Thera, which in present-day Greece is known as Santorini.

To design their system, the Princeton team collaborated closely with the archaeologists and conservators working at Akrotiri, which flourished in the Late Bronze Age, around 1630 B.C.E. 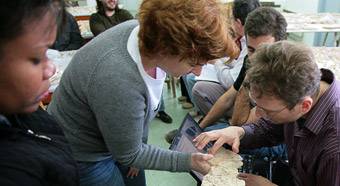 Reconstructing an excavated fresco, mosaic or similar archaeological object is like solving a giant jigsaw puzzle, only far more difficult. The original object often has broken into thousands of tiny pieces -- many of which lack any distinctive color, pattern or texture and possess edges that have eroded over the centuries.

As a result, the task of reassembling artifacts often requires a lot of human effort, as archaeologists sift through fragments and use trial and error to hunt for matches.

While other researchers have endeavored to create computer systems to automate parts of this undertaking, their attempts relied on expensive, unwieldy equipment that had to be operated by trained computer experts.

The Princeton system, by contrast, uses inexpensive, off-the-shelf hardware and is designed to be operated by archaeologists and conservators rather than computer scientists. The system employs a combination of powerful computer algorithms and a processing system that mirrors the procedures traditionally followed by archaeologists.

"We mimic the archaeologists' methods as much as possible, so that they can really use our system as a tool," said Szymon Rusinkiewicz, an associate professor of computer science whose research team led the Princeton effort. "When fully developed, this system could reduce the time needed to reconstruct a wall from years to months. It could free up archaeologists for other valuable tasks such as restoration and ethnographic study."

In 2007, a large team of Princeton researchers made a series of trips to Akrotiri, initially to observe and learn from the highly skilled conservators at the site, and later to test their system. During a three-day visit to the island in September 2007, they successfully measured 150 fragments using their automated system.

Although the system is still being perfected, it already has yielded promising results on real-world examples. For instance, when tested on a subset of fragments from a large Akrotiri wall painting, it found 10 out of 12 known matches. Further, it found two additional matches that were previously unknown.

"This showed that the system could work in a real-life situation," said Tim Weyrich, a postdoctoral teaching fellow in computer science at Princeton who is the technical lead researcher on the project and who designed many of its components. The team is planning another trip to the site this fall to permanently install the system for the archaeologists' use, said Weyrich, who in September will become an assistant professor of computer science at University College London.

The setup used by the Princeton researchers consists of a flatbed scanner (of the type commonly used to scan documents and which scans the surface of the fragment), a laser rangefinder (essentially a laser beam that scans the width and depth of the fragment) and a motorized turntable (which allows for precise rotation of the fragment as it is being measured). These devices are connected to a laptop computer.

By following a precisely defined and intuitive sequence of actions, a conservator working under the direction of an archaeologist can use the system to measure, or "acquire," up to 10 fragments an hour. The flatbed scanner first is used to record several high-resolution color images of the fragment. Next, the fragment is placed on the turntable, and the laser rangefinder measures its visible surface from various viewpoints. The fragment is then turned upside down and the process is repeated.

Finally, computer software, or algorithms, undertake the challenging work of making sense of this information. The Princeton researchers have dubbed the software that they have developed "Griphos," which is Greek for puzzle or riddle.

One algorithm aligns the various partial surface measurements to create a complete and accurate three-dimensional image of the piece. Another analyzes the scanned images to detect cracks or other minute surface markings that the rangefinder might have missed.

The system then integrates all of the information gathered -- shape, image and surface detail -- into a rich and meticulous record of each fragment.

"This in itself is extremely useful information for archaeologists," said Weyrich. 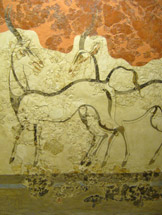 This is one of the reassembled wall mosaics from the ancient Greek civilization Thera, which was buried under volcanic ash more than 3,500 years ago. (Photo: Princeton Graphics Group)

Once it has acquired an object's fragments, the system begins to reassemble them, examining a pair of fragments at a time. Using only the information from edge surfaces, it acts as a virtual archaeologist, sorting through the fragments to see which ones fit snugly together.

"Having this ability to really exhaustively try everything very quickly could potentially be quite helpful," said Benedict Brown, whose doctoral thesis, completed recently under the direction of Rusinkiewicz, is devoted in large part to the fresco project.

Analyzing a typical pair of fragments to see whether they match is very fast, taking only a second or two. However, the time needed to reassemble a large fresco may be significant, as the system must examine all possible pairs of fragments. To make the system run faster, the researchers are planning to incorporate a number of additional cues that archaeologists typically use to simplify their searching for matching fragments. These data include information such as where fragments were found, their pigment texture and their state of preservation.

However, Weyrich noted, Princeton's system will never replace the experience, contextual knowledge and "soft skills" that conservators and archaeologists bring to the table. "Reconstructing these frescoes is incredibly complex, given the condition of the fragments and the sheer number of fragments," said Weyrich. "The computer takes over the laborious parts of the process while leaving the important, intuitive decisions to the humans."