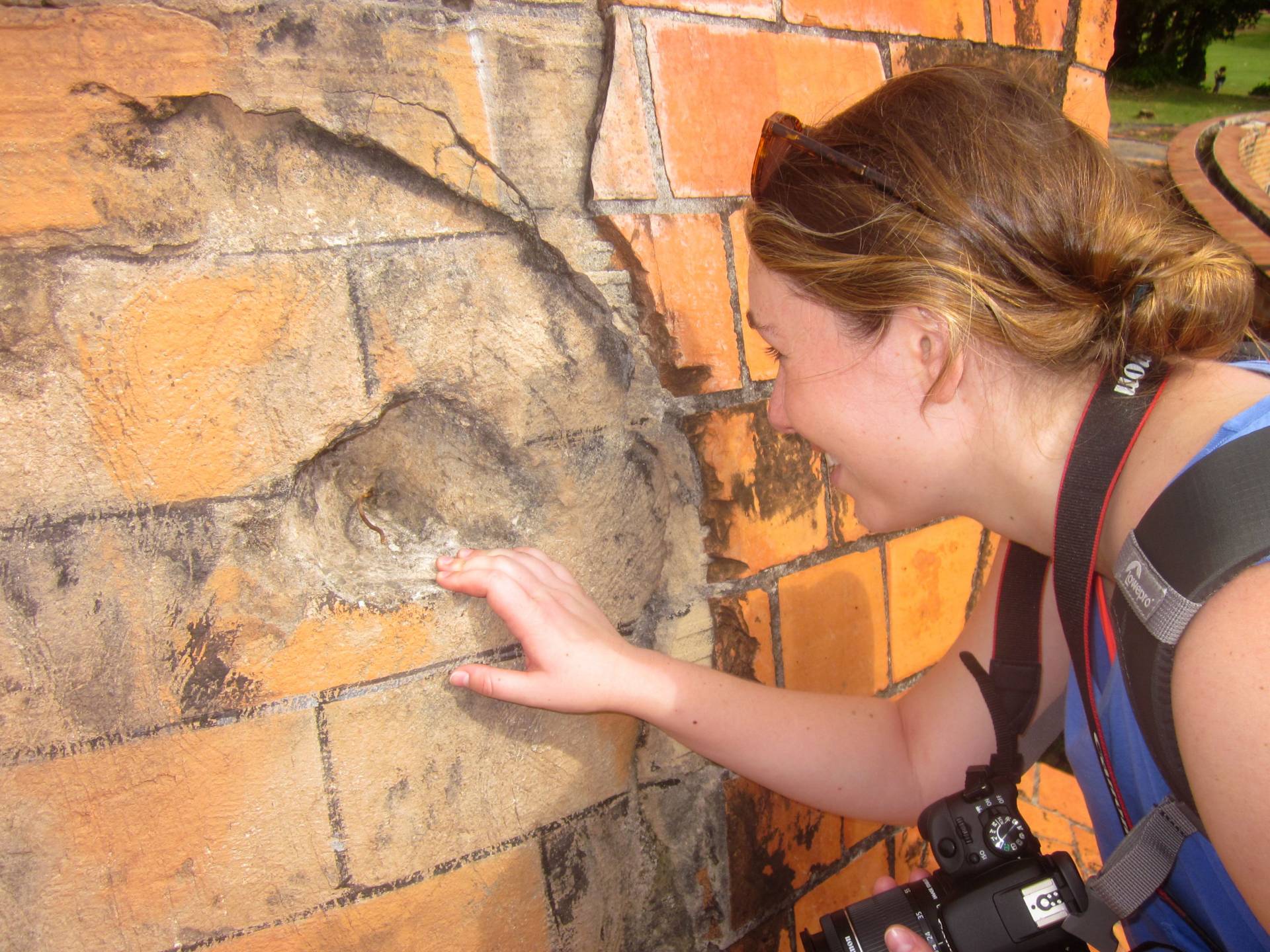 Princeton senior Isabella Douglas, a civil and environmental engineering major, examines reinforced concrete at the main dome of the National School of Ballet outside Havana, Cuba. The class trip last fall became the foundation for Douglas' senior thesis, which provides new insights into the methods used to build the structure.

Photo by Branko Glišić, Department of Civil and Environmental Engineering

Builder José Mosquera's masterwork languishes in a wooded area outside Havana, Cuba, going slowly to ruin and being colonized by trees and vines. But when Princeton University senior Isabella Douglas and a team of students met him on the grounds of Cuba's National School of Ballet last November, Mosquera gave them a rare gift.

An album of 50-year-old photographs — up to 20 pages of images taken at various stages — shows the school being built, including pictures of the very construction technique Douglas had hoped to examine when she visited Cuba. The photographs exist nowhere else in the world. They provide not only a record of how the famed ballet school went up, but help usher in a significant shift in understanding of the use of thin-tile vaulting, the subject of Douglas' senior thesis, "Cuba's National School of Ballet: Redefining a Structural Icon."

"When we finished, he was really emotional," said Douglas, a civil and environmental engineering major who made a digital archive of the photos. "It was this phenomenal project that he had been a part of but that for 50 years no one really wanted to talk about. He said seeing students [young engineers] come in and fall in love with the structure as he loved it was really the best gift he could have gotten."

Douglas, who hails from an academic family in Bloomington, Indiana — both parents are professors — considers herself "very analytical." But she also loves structures and old buildings, dating from childhood construction and carpentry projects and reinforced by a visit to a warehouse in Galveston, Texas, damaged by the great hurricane of 1900. These interests blended seamlessly at Princeton, where Douglas also is pursuing a certificate in architecture and engineering. 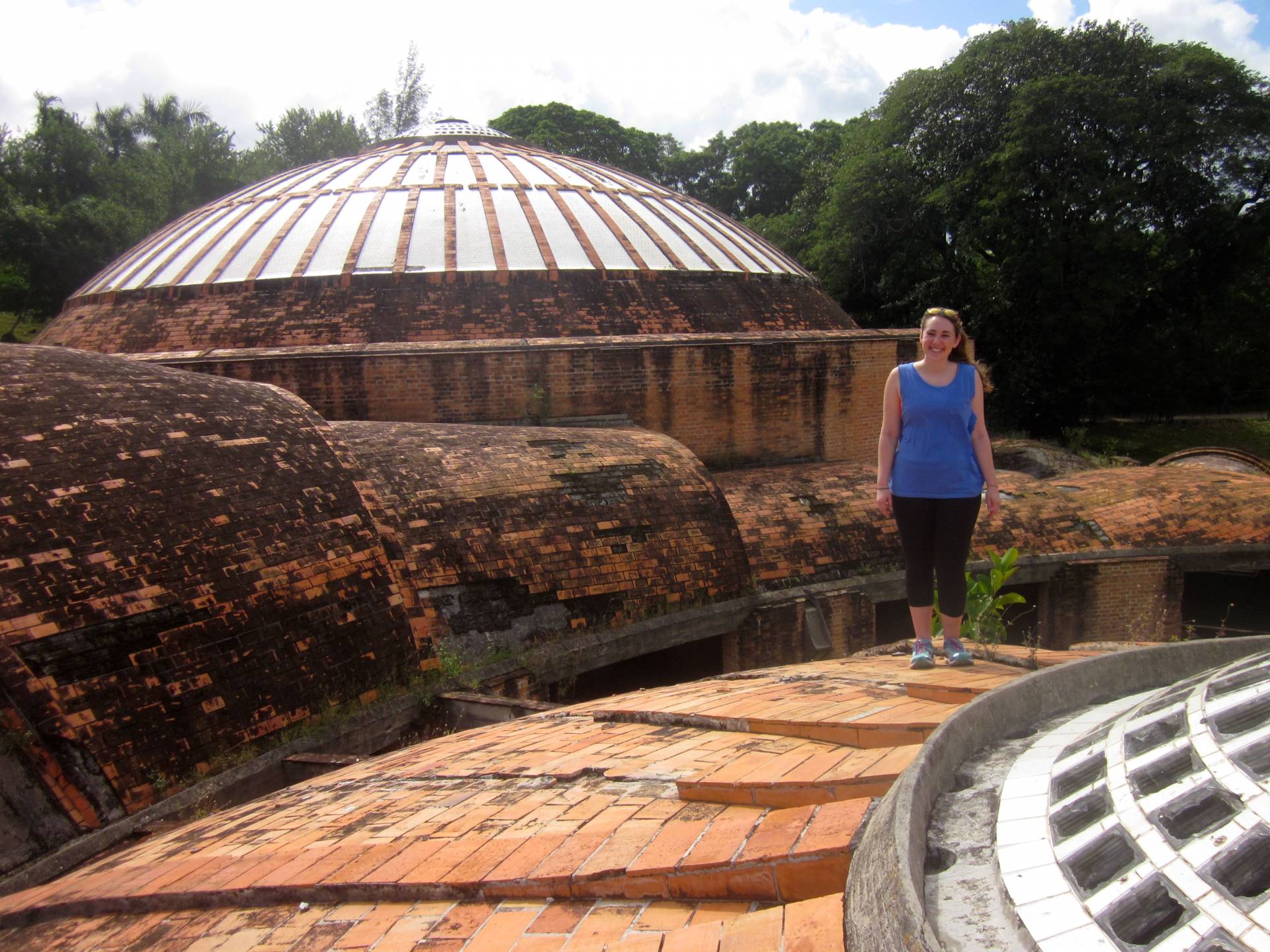 Douglas traveled to Cuba with classmates to examine interesting structures, including the ballet school, led by associate professors of civil and environmental engineering Branko Glišić and Maria Garlock.

Photo by Branko Glišić, Department of Civil and Environmental Engineering

As part of her studies, Douglas traveled to Cuba last fall with civil and environmental engineering classmates to examine interesting structures in Cuba. Branko Glišić, an associate professor of civil and environmental engineering who co-organized the trip with his colleague Maria Garlock, said the ballet school, known for its graceful tiled dome, is one of the country's most beautiful structures. The building also poses several intriguing engineering questions, particularly about the dome's construction.

Douglas, who had already completed "outstanding" independent research on the construction of London's Crystal Palace, seemed the ideal person to answer some of them, Glišić said. So he and Garlock asked Douglas to conduct a structural analysis of the building during the trip.

"Knowing Belle, her graduate-level talents, and her enthusiasm for historic structures, we invited her to work on the project," said Garlock, an associate professor of civil and environmental engineering and director of the Program in Architecture and Engineering. "She did not disappoint."

The school's dome has long been considered an example of thin-tile vaulting, also called "Catalan" vaulting, a centuries-old construction technique dating back to Roman times. Catalan vaults are constructed entirely of small tiles and quick-setting mortar. The builders add structural strength by layering the tiles on top of each other as they gradually fill in the dome — spots that need more strength have thicker layers. If done right, the technique allows builders to create graceful arches and domes without building wooden frames to brace the structures during construction. But the method is incredibly demanding and requires carefully estimating the thickness of different areas.

Garlock and Glišić wanted to know how this was done at the ballet school, and Douglas, intrigued, set about finding out. 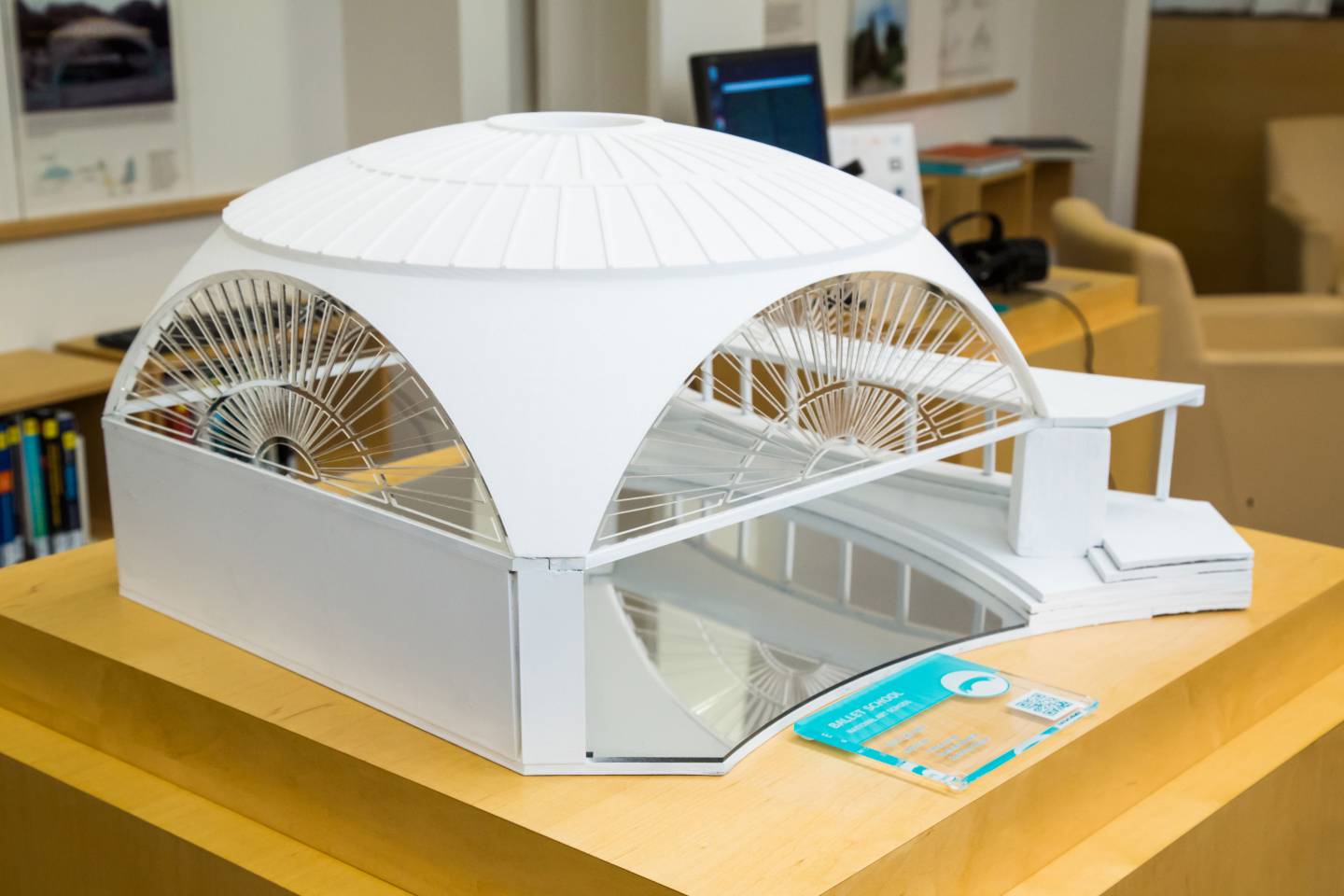 Students in the course "A Social and Multidimensional Exploration of Structures" created a model of a classroom at the ballet school. It was produced by senior Danielle Sawtelle and juniors Felicia Jiang and Katherine Wojton.

After receiving permission to inspect the school last November, Douglas and the Princeton team took numerous photographs of the building's main dome — including details such as the numbers of tiles in its edge pieces. They also took precise measurements of the span of the central dome with a laser distance meter, and smaller dimensions with a tape measure.

But it was actually while she was walking on the school's roof that Douglas and the team found cracks through which they could see the reinforcing steel bars, known as "rebar," the mesh of steel wires used in reinforced concrete. The discovery showed that the building was not wholly built with thin-tile vaulting construction, but was fortified at critical, high-stress junctures with concrete.

"None of us from Princeton believed we had found rebar at first," Douglas said. "It took about an hour of walking around and coming back to that spot on the roof. That's when we realized that the builders had been using reinforced concrete in certain sections."

In her thesis, Douglas' explains that the ballet school's dome is actually supported by ribs of reinforced concrete, which are covered with tile. The superstructure sits upon curved, stacked adobe brick walls.

"It is actually not a Catalan vault after all," Glišić said.

The ballet school, designed by architect Vittorio Garatti, is part of a complex of five schools constructed in the early 1960s at a former golf course in Havana. Two schools, one of plastic arts and one of dance, are in operation. Three schools, including the ballet school, were never finished, although its design is well known. From a design standpoint, Glišić said, the schools make up "one of the most striking complexes built in the 20th century."  In addition to the central domes, the complex features vaulted corridors and smaller, domed rooms. Glišić said that Douglas mapped supporting concrete structures throughout the complex.

"They used concrete at the spots where they needed support," he said. "From the engineering point of view, it was the correct solution, and Belle's analysis fully confirmed it."

Glišić and Garlock said Douglas' thesis is a significant contribution to the understanding of the structure, and they plan to submit it for publication in a scholarly journal. Douglas, who is scheduled to attend graduate school at Stanford University, hopes her findings will aid in work to preserve the ballet school. She said with the original design documents at risk of being lost, it is a critical time to document the structure from historical, engineering and architectural perspectives.

The fact that the building can no longer be considered an example of Catalan vaulting does not diminish its significance, Douglas said. The builders worked with materials and skills available at the time and used them exactly as they should.

"We didn't ever want to lessen the structure by what we found," she said. "We wanted to give it a more complete story." 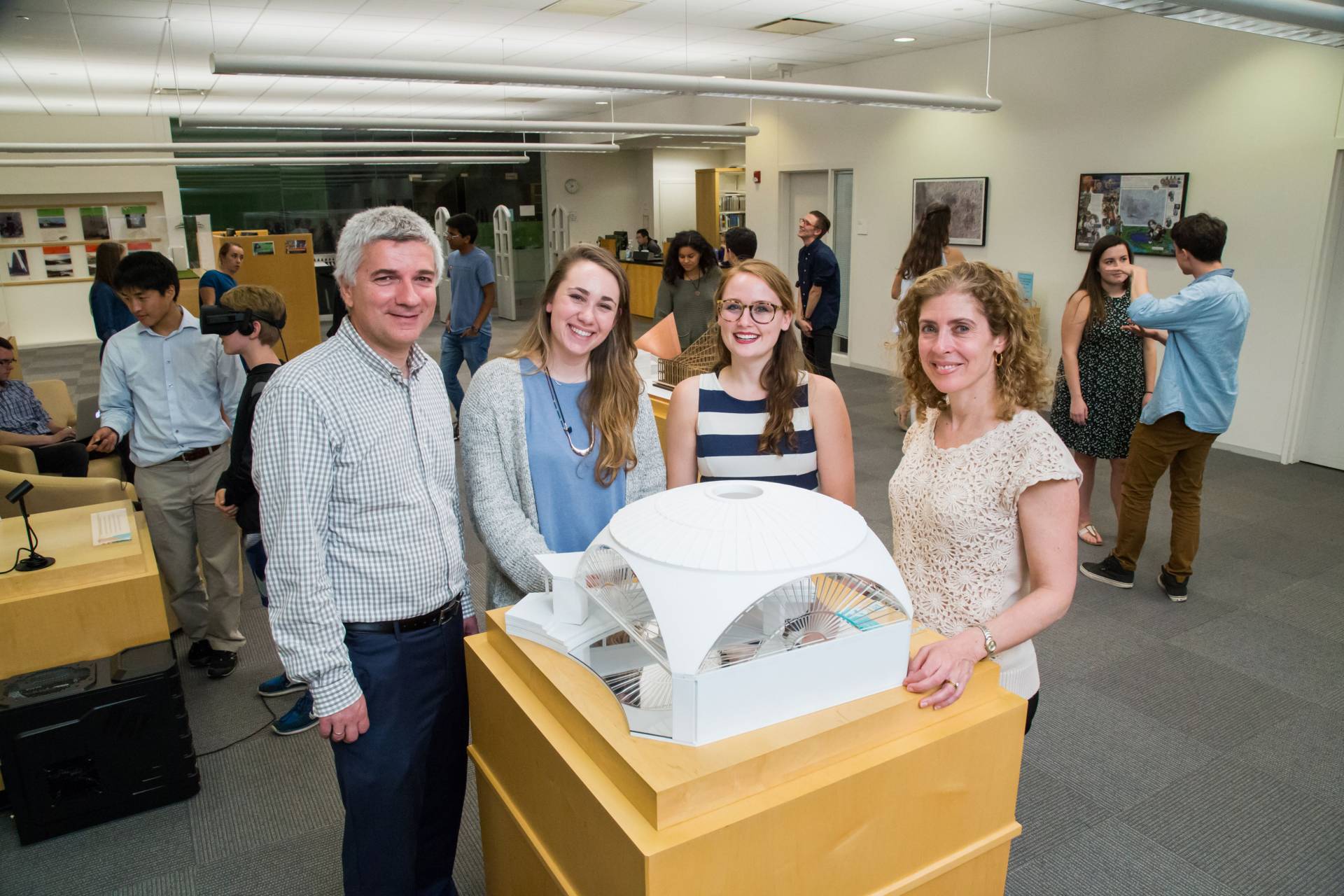 Students and faculty from the civil and environmental engineering department gather at the model. From left: Branko Glišić, associate professor; Douglas; Rebecca Napolitano, graduate student and a teaching assistant for the course; and Maria Garlock, associate professor.