When Princeton senior Maryanne Wachter visited Chicago on a recent class trip, she returned to a childhood fascination.

"I grew up in Louisiana but used to visit my grandmother in Chicago," said Wachter, a civil and environmental engineering major. "That's where I first saw tall buildings and where I decided to be a civil engineer."

Chicago was one of three American cities known for their iconic towers that Wachter and her classmates toured as part of a new Princeton engineering class devoted to the study of the relations of buildings, space, time and societal dynamics. Called "A Social and Multi-dimensional Exploration of Structure," the course was taught for the first time this past fall with a theme of tall buildings. It was developed with funding from Princeton's 250th Anniversary Fund, which supports innovation in undergraduate education, and will be offered at least every other year with a new theme each time. 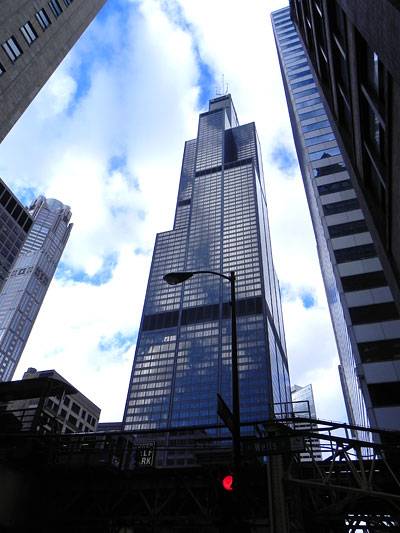 Willis Tower, formerly known as Sears Tower, was one of the Chicago skyscrapers Princeton students visited as part of a class on tall building engineering. (Photo by Maria Garlock)

Taught by Maria Garlock and Sigrid Adriaenssens, both assistant professors of civil and environmental engineering, last fall's class took a holistic approach to the design and construction of soaring towers. In addition to learning about the technical aspects of designing and constructing tall buildings, the students explored how buildings fit into the political, social and economic conditions of their time.

The students learned, for instance, that construction of many of Chicago's skyscrapers was driven by a desire to bring people back into the city in the 1950s and 1960s, while Houston's towers resulted from the city's booming business environment in the 1960s and 1970s.

"A tall building doesn't just come out of nowhere," Adriaenssens said. "There are political and economic forces at work and trends that influence design and construction."

The class focused on the buildings of Fazlur Khan, a Bangladeshi-American engineer who designed some of America's most famous skyscrapers, including the John Hancock Center and Willis Tower (formerly known as the Sears Tower), both in Chicago.

The 11 students in the class -- all civil and environmental engineering majors -- visited buildings built by Khan and others in Chicago, New York and Houston to see the towers firsthand and learn about the circumstances in which they were built and how they've fared over time.

The class also toured engineering firms and interviewed influential tall building designers, including Bill Baker, who designed Burj Khalifa in Dubai, the tallest building in the world, and Leslie Robertson, one of the chief engineers who designed New York's World Trade Center, which was destroyed in the Sept 11, 2001, terrorist attacks. 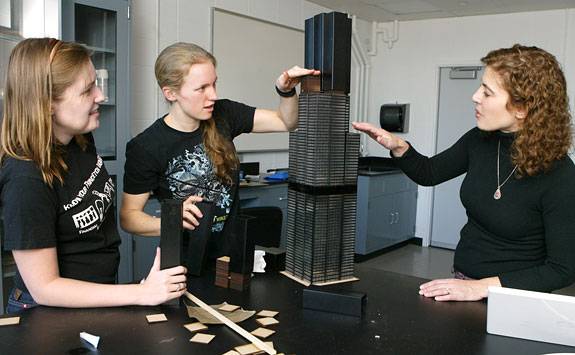 "The students got to see what they would be doing after graduation," Garlock said. "They also got some good career advice. Everyone kept telling them that they needed to go to graduate school if they want to design tall buildings."

Based on their research, the students wrote essays that Adriaenssens and Garlock plan to use as chapters in a book about Fazlur Khan as a structural artist. Professor Emeritus David Billington will co-write the book with them. The students also built scaled models of iconic buildings as a final project for the course, and Adriaenssens and Garlock are organizing these models into an exhibit to be displayed in the Friend Center Library and to be used in precepts of another course, "Structures in the Urban Environment." 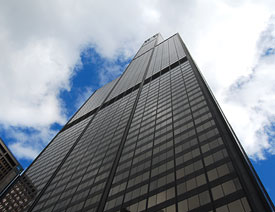 In addition to learning about the technical aspects of designing and constructing tall buildings such as the Willis Tower, students explored how buildings fit into the political, social and economic conditions of their time. Photo by Maryanne Wachter)

"The idea of the models is to begin to learn the process of how we build things," Garlock said. "You should never design something when you have no idea how to build it."

For her model, Wachter worked with another senior, Michaela Glaeser, to build a small version of the Willis Tower. However, Wachter said the class visit to Chicago confirmed that the John Hancock Center, with its crisscrossed outer beams, is still her favorite.

"You can see how the structure works from the outside," she said. "I love that it's so visually distinctive in the Chicago skyline."