On a spring day, the class walked into a cavernous construction site that is becoming the Andlinger Center for Energy and the Environment at Princeton University. Light, filtering from the open floors above, lined the gray concrete floors and the steel beams that cross the high ceiling. Construction crews had knocked off a few minutes earlier. Sound in the space, far below street level, was muted.

Sam Rozycki, leading the small group of students, pointed to open spaces cut from the middle of a nearby beam.

"A lot of that beam is missing," said Rozycki, senior project manager at the University's Office of Design and Construction. "Can anyone tell me why it still works?" 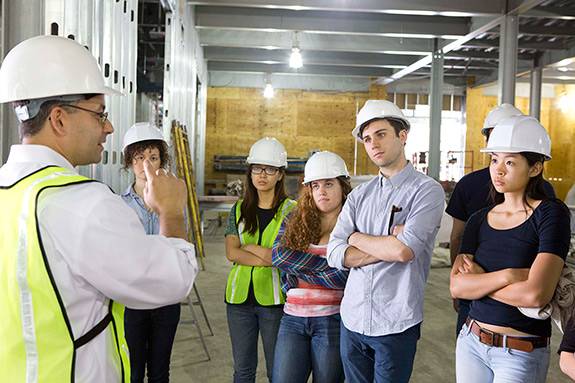 Sam Rozycki (left), senior project manager at Princeton's Office of Design and Construction, leads a tour of the construction site of the Andlinger Center for Energy and the Environment for students in the class "Materials in Civil Engineering." (Photos by Denise Applewhite, Office of Communications)

Dennis Smith, a sophomore majoring in civil and environmental engineering, spoke up, "Most of the strength for resisting bending is in the flanges."

"The engineer is more concerned about bending in the center of the beam, which is addressed by the flanges," he said. "Shear strength is more of a concern at the end of the beam."

Leading student groups through construction sites is not typically part of a construction manager's job, but the Andlinger project on Olden Street offers student engineers an opportunity for first-hand observation of the fundamentals they are learning in class. On one recent tour, Claire White, an assistant professor of civil and environmental engineering and the Andlinger Center for Energy and the Environment, used the site to demonstrate to the students in her class "Materials in Civil Engineering" how concrete and steel were used in various ways to shape the emerging structure. 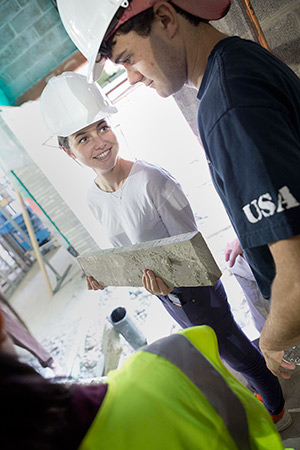 Undergraduates Victoria Sassoon and Shaun Stojak examine some of the materials at the Andlinger site.

"The week before, we were in a cement plant," said White. "It is very important to give the students real-world experience."

The new building, scheduled to open in summer 2015, will hold lecture and laboratory classrooms, office space, a lecture hall, conference rooms, and research labs, including "clean rooms" that have ultra-low dust levels and labs that house some of the world's most sophisticated imaging and analytical equipment.

Emily Carter, the Gerhard R. Andlinger Professor in Energy and the Environment and founding director of the center, stressed the importance of "the Andlinger Center as a living laboratory, both as it is being built and upon occupancy."

Added Carter, "Students will have the opportunity to not only witness and learn about the creation and operation of this building dedicated to sustainability but also to participate in cutting-edge research aimed at preserving the planet for future generations."

Rozycki, who estimates that he has given about 18 class tours of the site, said he is continually impressed by the questions he receives from students.

Richard Garlock, a visiting lecturer in civil and environmental engineering, has brought several of his classes to the site. In fact, the window of his classroom, in the Engineering Quadrangle, overlooks the project, and he tries to end every class with a look through the window at progress on the construction site.

Garlock, an associate partner with the New York-based firm Leslie E. Robertson Associates and the project manager for the new 4 World Trade Center Tower project, said it is important for engineering students to get into the field during their studies. 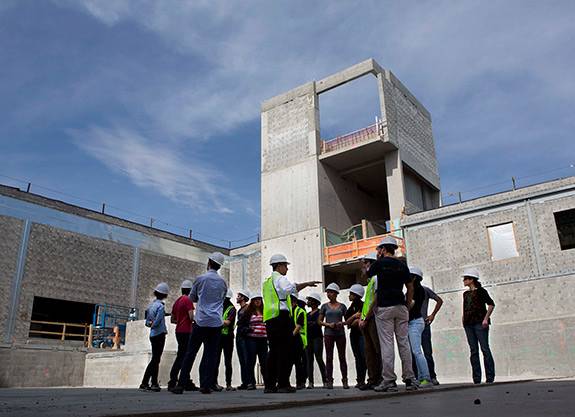 The Andlinger construction site gives students the opportunity to take a close look at how materials and engineering help shape the emerging structure.

"You have to set their sense of scale and you can't do it in the classroom alone," he said. "They have to see and smell the materials and the space — you have to get their eyes used to seeing what is going on."

Garlock usually takes his students on tours of several sites during a term. He said one of the benefits of touring Princeton projects is that Rozycki and his colleagues at the Office of Design and Construction go out of their way to be helpful. 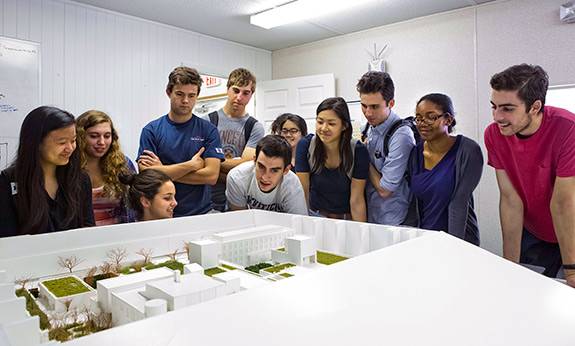 Students study a model of the Andlinger Center, scheduled to open in summer 2015. Emily Carter, the Gerhard R. Andlinger Professor in Energy and the Environment and founding director of the center, described it as a "living laboratory, both as it is being built and upon occupancy."