Architects for Princeton's Andlinger Center for Energy and the Environment have completed initial plans for laboratory, classroom and garden spaces that support the center's mission while creating an inviting new presence at the eastern edge of campus.

The design provides for specialized facilities for research related to sustainable energy use and production. With a network of gardens and connections to existing buildings, the new spaces are designed to enhance the engineering neighborhood while meeting high standards for sustainable construction.

The plans, developed by the architectural firm of Tod Williams Billie Tsien Architects of New York, call for 127,000 square feet of new construction, as well as a number of smaller renovation projects. The University has submitted the project plans to the regional planning board and expects to begin construction in 2012 after site plan approval and detailed design. The project is expected to be finished in 2015. 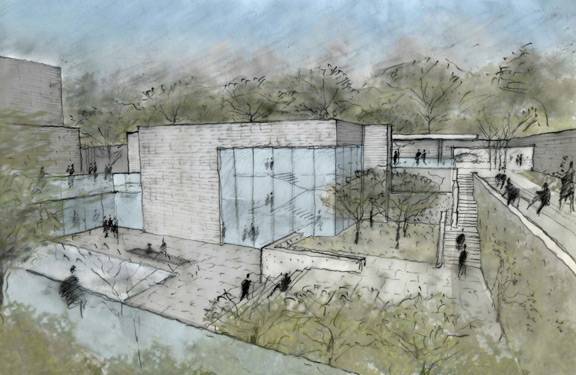 The view from the end of the Engineering Quadrangle, looking south toward Prospect Avenue, shows the large lecture hall that will replace the former Osborn Clubhouse at 86 Olden St. To the right is the inside of the existing brick wall that delineates the corner of Olden and Prospect Avenue. Visitors to the space are welcomed by gardens. Images for news media

Completion of the overall plan marks an important juncture for the Andlinger Center, which was created in 2008 thanks to a $100 million gift from international business leader Gerhard Andlinger, a member of Princeton's class of 1952.

"The research that will be enabled by these new spaces is critically important, yet what is striking about the plan is how gracefully such a sophisticated program is integrated into the natural environment," said Mark Burstein, Princeton's executive vice president. "Williams/Tsien have taken a strength of Princeton’s historic campus -- that open spaces are as important as buildings -- and incorporated this theme into the engineering neighborhood."

The gardens give the site a "porosity" or openness that invites people to enter, meet and collaborate, said Ron McCoy, University architect. "Within the building you'll always be moving from garden to garden, from light to light," McCoy said. 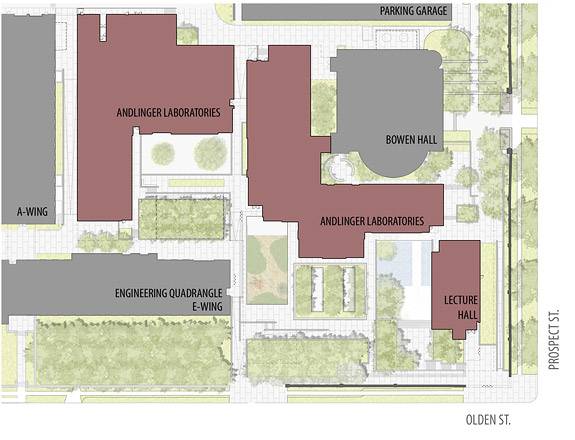 This site map shows the three buildings and four garden areas that make up the Andlinger Center. The buildings connect to the Engineering Quadrangle and Bowen Hall, while the gardens introduce the park-like feeling that characterizes the Princeton campus. The Ferris Thompson Gateway on Prospect and the brick wall along the corner of Olden and Prospect will be preserved.

Going beyond technical considerations is part of the University's vision for the Andlinger Center, said H. Vincent Poor, dean of the School of Engineering and Applied Science.

"Engineering in general and energy research in particular stand at the intersection of many disciplines," Poor said. "They address problems that have technological components, but also elements of pure science, the complexities of human nature, public policy and economic opportunity. This design is exciting because it will promote progress at all levels."

The plan builds on the findings of a steering committee of faculty members who worked with the New York-based architecture firm of Davis Brody Bond Aedas to develop a program study detailing the needs and space requirements for the project. The overall location of the Andlinger Center and the role of campus neighborhoods, such as arts, sciences and engineering, are described in the University's Campus Plan, which was completed in 2008.

The Andlinger design calls for a set of three interconnected buildings -- the exteriors of which will be mostly masonry brick and glass -- that meet a range of needs, from highly specialized labs to classroom and meeting spaces. The lab with the most demanding technical requirements will be located next to the Engineering Quadrangle's A Wing. That building will include laboratories where the amount of airborne dust is reduced 1,000-fold, a requirement for much nanotechnology research.

It also will contain imaging labs for examining materials at the atomic level. Microscopes operating at that scale require an ultra-low vibration environment, because even the smallest rumble from the street would shake objects so much they could not be properly observed. To achieve such low vibration, those labs must be built directly on top of bedrock, which means placing those facilities below the natural grade level.

This aspect of the design presented a challenge in making these lower level spaces appealing, said Pablo Debenedetti, vice dean of engineering and chair of the Andlinger steering committee. 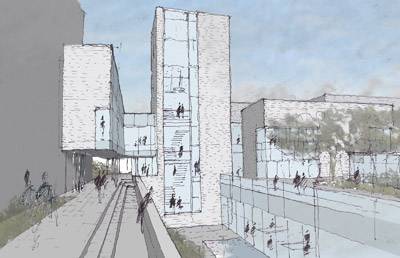 This view of the Andlinger Center looks east from Olden Street, from a point across the street from Mudd Library. At the far left of the drawing is the edge of the Engineering Quadrangle. At the center and right of the image is one of four garden areas that define the complex.

"Tod and Billie have come up with a really beautiful solution," Debenedetti said. Instead of being fully underground, the lower level spaces will open to gardens. "They are bringing natural light and a contemplative, peaceful feeling to the place."

Creating a connection between the built and natural environments was a key motivation throughout the project, said Tod Williams, the principal architect, who earned his bachelor's and master's degrees at Princeton in 1965 and 1967.

"I knew the engineering area well and didn't feel like it was part of the fabric of the University," Williams said. "I was thrilled to realize we might contribute to the research and make it a loved portion of campus."

Paying particular attention to the ground itself results in a design for buildings that are not imposing in height, Williams said. The buildings will have only three floors, so visitors will either stay on the "campus level," go down to the "garden level" or go up one flight to the second level, which will be even with the main floor of the EQuad. "We wanted to emphasize the plane of the ground, to be as close as possible to that primary surface," Williams said.

Siting the buildings on bedrock also improves the energy efficiency of the lab, because the ground will be used to moderate the building temperature during hot and cold weather. This feature is among many aspects intended to make the project meet the equivalent of the U.S. Green Building Council's Leadership in Energy and Environmental Design (LEED) Silver standards.

Particular attention is being paid to the buildings' major utilities, including the heating, cooling and electrical systems. Air handling systems will rely as much as possible on the natural flow of air, and heat recovery systems will harvest heat from exhaust air to reduce heating bills. The building also will have "green roofs" on which plantings filter and retain storm water, while further insulating the building.

"Much of the progress in sustainability will come in further detailing, but the initial concept provides a very good foundation for meeting the University's goals," Burstein said.

Next to the laboratory building, a second main building will provide office and other research space. It will connect to the EQuad's E Wing, as well as to Bowen Hall, the current focus of materials science research.

The third structure will be a lecture hall at the intersection of Olden Street and Prospect Avenue. Construction of that portion of the project will require demolition of the former Osborn Clubhouse at 86 Olden St., former home of the Fields Center, which moved to 58 Prospect Ave. in September. The Ferris Thompson Gateway on Prospect and the brick wall along the corner of Olden and Prospect will be preserved.

Located on the corner and facing the center of campus, the planned lecture hall presents an important outward-looking face for the Andlinger Center, Debenedetti said. Classes, talks and conferences will help connect the technical work of the center with other disciplines, while the space itself will draw people into a part of campus that has not been used as effectively as other areas.

"The location for the Andlinger Center is in an essential pivot point for the overall campus," Burstein said. "Tod and Billie's design takes full advantage of this location by dramatically improving the EQuad and opening connections southward to the science neighborhood."

Pending municipal approval, initial work on the site, including placement of utilities and demolition, would begin in 2011. The University also continues to seek additional donors to support the construction of the lecture hall and other key components of the project.