Taking an intimate view of religion in Mozambique

Seeking more than a scholarly understanding of a Pentecostal form of Christianity called the Mazione church for her senior thesis, religion major Lily Cowles spent last summer in Mozambique conducting interviews with churchgoers about their beliefs and traditions. Here, she holds the flag of Mozambique out of her dorm room window.

During the summer after her sophomore year, Cowles was volunteering in the southern African nation of Mozambique. En route to and from the orphanage where she was working, she noticed a sign announcing Mazione church services, and her curiosity was piqued.

Cowles investigated a bit while she was there, but found it difficult given that the congregations don't meet in actual church buildings and she didn't speak Portuguese, the nation's official language. She set about learning everything she could about the religion upon her return to Princeton.

As she discovered, the Mazione church is a Pentecostal form of Christianity, which emphasizes spiritual renewal through the Holy Spirit, often in purification rituals held on beaches. But Cowles wasn't satisfied with just a scholarly understanding of the church.

Reading theological and social analyses of the church, Cowles said, "I kept thinking, 'I don't think this is how the people would think of their religion if they were given an opportunity to talk about it.' That's how I came up with wanting to make a film, to let them speak for themselves."

With an intention to create a documentary based on first-person interviews, Cowles had her work cut out for her -- in just one academic year, she needed to learn Portuguese and filmmaking. Those weren't the only challenges she faced: Upon arrival in Mozambique the summer before her senior year, her living arrangements fell through and she found herself with nowhere to stay. Undeterred, Cowles contacted her visa agent at the U.S. embassy in New York City online via Skype, and he told her to call his mother in Mozambique. His family "adopted" Cowles, who lived with them for the summer and now calls them multiple times a week to check in (which they expect of their children). 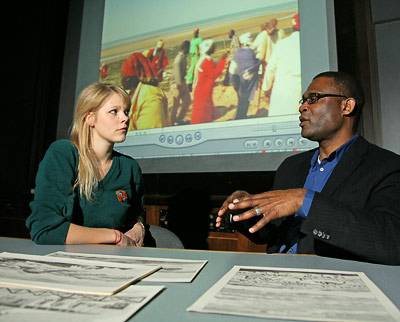 Cowles discusses her senior thesis project -- a documentary on the Mazione church in Mozambique -- with adviser Wallace Best, a professor of religion and African American studies. The film is intended to let the churchgoers speak for themselves about their religion, according to Cowles.

"What I discovered and try to show in the film is that the Maziones seem to have felt a distinction between the Christian religion and their familial, ancestral tradition," Cowles said. "The church aligns the Christian doctrines in the Bible and the cultural traditions of southern Mozambique.

"For them, the Mazione church is a preservation of the traditional within what they think of as an acceptable modern context," Cowles added, noting that many people she spoke with expressed a degree of defensiveness about being perceived as primitive or tribal.

With the emphasis on healing, both spiritually and physically, the church competes with the traditional healers in the culture known as "curandeiros," who charge large sums of money for their services and are often too expensive for people of little economic means. Since the majority of Mazione adherents in Mozambique are poor, with little to no access to education or health care, the church also helps provide for their basic needs.

"Lily's film on Pentecostalism in Mozambique attempts to capture a sense of the construction of this religious practice in an urban area characterized by migration and social dislocation," said her adviser Wallace Best, a professor of religion and African American studies. "Hers will be the first significant examination of Pentecostalism -- the fastest growing religion in the world -- in this African nation. I have seen parts of the film and can report that it is a brilliant and brilliantly sensitive portrayal of church worship and belief. The fieldwork is impeccable and thorough, and the filming is of the highest quality."

Somewhat fitting for a religion major, Cowles grew up in a little town called Bethlehem, Conn. The daughter of two actors, she planned to pursue theater and dance at Princeton and was in the University's world premiere production of "Boris Godunov" in her sophomore year. ("This was the second most amazing thing I've done at Princeton, after my thesis," she said.)

Increasingly fascinated by religion, and the mystery it contains, she ultimately chose to major in religion and combine her studies with her interest in the arts.

"With my thesis, I wanted to challenge myself and creatively approach academia," she said. "That's what the thesis is all about -- having an idea, taking risks and seeing how far you can push yourself."

Center for the Study of Religion names fellows