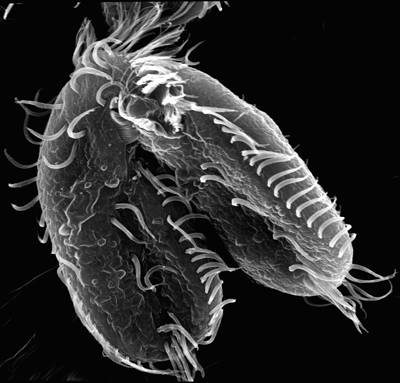 Princeton scientists are probing the genetics of the pond organism Oxytricha, shown here in the process of reproducing. (Photo: Robert Hammersmith)

Scientists have called it "junk DNA." They have long been perplexed by these extensive strands of genetic material that dominate the genome but seem to lack specific functions. Why would nature force the genome to carry so much excess baggage?

Now researchers from Princeton University and Indiana University who have been studying the genome of a pond organism have found that junk DNA may not be so junky after all. They have discovered that DNA sequences from regions of what had been viewed as the "dispensable genome" are actually performing functions that are central for the organism. They have concluded that the genes spur an almost acrobatic rearrangement of the entire genome that is necessary for the organism to grow.

It all happens very quickly. Genes called transposons in the single-celled pond-dwelling organism Oxytricha produce cell proteins known as transposases. During development, the transposons appear to first influence hundreds of thousands of DNA pieces to regroup. Then, when no longer needed, the organism cleverly erases the transposases from its genetic material, paring its genome to a slim 5 percent of its original load.

"The transposons actually perform a central role for the cell," said Laura Landweber, a professor of ecology and evolutionary biology at Princeton and an author of the study. "They stitch together the genes in working form." The work appeared in the May 15 edition of Science.

In order to prove that the transposons have this reassembly function, the scientists disabled several thousand of these genes in some Oxytricha. The organisms with the altered DNA, they found, failed to develop properly.

Landweber and other members of her team are researching the origin and evolution of genes and genome rearrangement, with particular focus on Oxytricha because it undergoes massive genome reorganization during development.

"Last year, we found the instruction book for how to put this genome back together again -- the instruction set comes in the form of RNA that is passed briefly from parent to offspring and these maternal RNAs provide templates for the rearrangement process," Landweber said. "Now we've been studying the actual machinery involved in the process of cutting and splicing tremendous amounts of DNA. Transposons are very good at that."

The term "junk DNA" was originally coined to refer to a region of DNA that contained no genetic information. Scientists are beginning to find, however, that much of this so-called junk plays important roles in the regulation of gene activity. No one yet knows how extensive that role may be.

Instead, scientists sometimes refer to these regions as "selfish DNA" if they make no specific contribution to the reproductive success of the host organism. Like a computer virus that copies itself ad nauseum, selfish DNA replicates and passes from parent to offspring for the sole benefit of the DNA itself. The present study suggests that some selfish DNA transposons can instead confer an important role to their hosts, thereby establishing themselves as long-term residents of the genome.