The U.S. Department of Defense has selected Princeton engineers to lead two new multi-institutional research initiatives, one aimed at transforming wireless telecommunications networks and the other at inventing materials that adapt themselves to changing loads and environments.

The grants were among 69 recently announced by the Pentagon as part of its Multidisciplinary University Research Initiative (MURI) program.

In addition to the two Princeton-led initiatives, University researchers are involved in two other newly announced MURI grants. Robert Cava, professor of chemistry, is a member of a team based at Stanford University investigating high-temperature superconductors. Yiguang Ju and Richard Miles, professors of mechanical and aerospace engineering, are participating in an initiative based at Ohio State University to develop "plasma-assisted combustion" technology for jet and rocket propulsion. 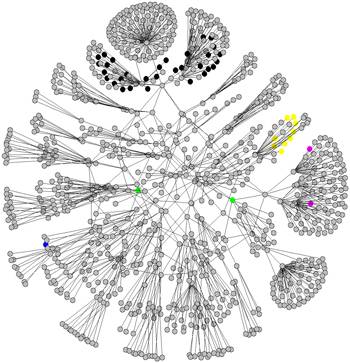 A major grant from the Air Force is funding research on a new type of telecommunications network that does not have a backbone of cell phone towers or other fixed structures. The work is enabled by an understanding of underlying mathematical structure of networks, such as the simulation of the Internet depicted here. In the illustration, failures at the green nodes cause changes in communication between the black and yellow nodes and between the pink and blue nodes. The researchers are conducting such tests with the help of an experimental network called PlanetLab. (Illustration: Courtesy of Aarti Singh)

The wireless telecommunications project will develop the fundamental science needed to design and manage a new type of wireless network that will not have a backbone of fixed infrastructure such as cell phone towers. Instead, these "ad hoc" networks would consist of mobile devices that find and use each other on the fly to enable timely and reliable communication.

The absence of backbone infrastructure makes these ad hoc networks extremely challenging to manage, particularly in environments characterized by high interference and intermittent connectivity, according to the researchers.

"Our project is organized around the idea that transformational change in network management will require extraordinary interdisciplinary breadth," said Calderbank, "in particular the infusion of fundamentally new mathematical ideas from algebraic topology and compressive sensing."

Reflecting the mix of engineering and mathematics, Calderbank and his co-investigators at Princeton -- Mung Chiang and H. Vincent Poor of electrical engineering and Jennifer Rexford of computer science -- are all associated with the Program in Applied and Computational Mathematics. 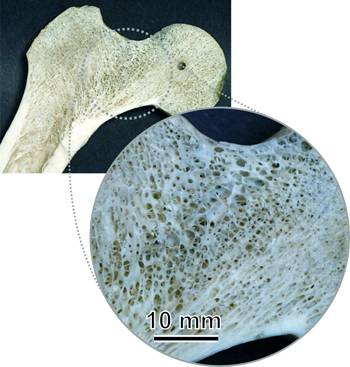 Engineers at Princeton and Harvard are developing new types of materials that have networks of pores, as in bone. The channels would carry new material, in liquid form, that repairs and strengthens the structure where needed. The Army-funded research aims to produce highly adaptable structural materials inspired by the multifunctional abilities of biological materials. (Illustration: Courtesy of Jean-Hervé Prévost, Daniel Dabbs, Ilhan Aksay and Erin Long)

The goal of the materials science project, sponsored by the Army Research Office, is to develop adaptive materials that are able to repair and strengthen themselves when needed. The researchers took their inspiration from biology, Aksay said. "With man-made materials, once you make it, it stays put just as you made it, until the material fails. In biological systems, the material adapts to its environment and uses."

Bone, for example, heals itself when broken and becomes weaker, absorbing back into the body, when not used, Aksay said. Bone also is multi-functional, not just providing structure, but housing bone marrow, protecting blood vessels, storing minerals.

A key to replicating such functions will be to develop porous materials, similar to the structure of bone, through which new material can flow to repair weak spots. The researchers plan to develop an embedded sensing system for knowing what areas need strengthening. They also will investigate methods for directing and moving fluid within the material to where it is needed.

The project builds on previous work by Aksay, George Whitesides at Harvard University and colleagues, who established a Biologically Inspired Materials (BiMat) research institute, first funded by the National Aeronautics and Space Administration.

Helping to lead the new work at Princeton will be Howard Stone, professor of mechanical and aerospace engineering, and Jean-Hervé Prévost, professor of civil and environmental engineering. The team also includes George Whitesides, Zhigang Suo and Joanna Aizenberg at Harvard.

NASA turns to universities for research in space-age materials