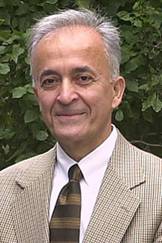 Supersonic aircraft may get a boost in speed from the tiniest of manmade particles.

An interdisciplinary team of scientists led by Princeton engineers has been awarded a $3 million grant to study how fuel additives made of tiny particles known as nanocatalysts can help supersonic jets fly faster and make diesel engines cleaner and more efficient.

Composed of snippets of sheets of carbon that are only a single atom thick, the particles have been shown to help fuels ignite and burn faster, a quality that could usher in the next generation of combustion engines. The Princeton team hopes to better understand why the nanocatalyst helps fuel ignite and what kinds of particles would work best for building the engines of the future.

"Right now we don't know what actual reactions enhance the combustion rates when the particles are added to fuels," said Ilhan Aksay, a professor of chemical engineering at Princeton and the lead investigator on the project. "If we understand it further, we can make it more effective."

The funding, which comes from the Air Force as part of the 2009 American Recovery and Reinvestment Act Research Program, will be used to tackle a fundamental barrier to designing faster supersonic aircraft. For aircraft already flying quicker than the speed of sound to travel even faster, their engines must operate at faster speeds and fuel must move through them more rapidly, but the ignition time and burn rate of current jet fuels limits the speed of the engines.

"To fly at highly supersonic speeds one needs to run the propulsion system at supersonic speed to maximize its efficiency, but there is little time to mix, ignite and extract energy from the fuel," said Richard Yetter, a professor of mechanical engineering at Pennsylvania State University who is a principal investigator on the project. "To make the planes go faster, we need to burn fuel faster."

The Princeton-led team has proposed a solution based on the use of graphene -- molecular sheets of carbon atoms. In 2003, Aksay and his chemical engineering colleague, Professor Robert Prud'homme, developed the first commercially viable technique for making graphene by using a chemical process to split graphite into its ultrathin individual sheets. The resulting flakes are 200- to 500-nanometers wide, making the largest of them about one-hundredth the width of an average human hair. 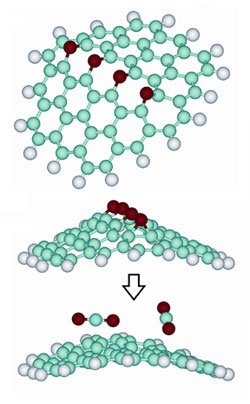 To create the graphene particles, the researchers remove carbon dioxide molecules from graphite oxide (top two molecules), which leaves an irregular bond pattern that creates a buckle in the otherwise flat graphene molecule (bottom molecule). This ridge prevents the graphene molecule from folding back to a stack of graphite. (Image: Courtesy of Aksay Laboratory)

Graphene exhibits unusual physical and electrical properties and has been lauded for its potential in ultrafast and light electronic technologies such as computers and digital displays. Aksay and his colleagues are hoping to leverage another characteristic of the graphene particles: When small amounts are added to liquid fuels, they lower the temperature at which the fuel ignites.

"The concentration of the nanocatalyst in the fuel would be very small," Aksay said. "The idea of being able to put in a very small quantity and have such a dramatic effect is important."

The catalyst might also be used to reduce the amount of nitric oxide produced by diesel engines or accelerate soot oxidation rates, which could reduce the pollution and fuel use. The graphene particles might also be used in liquid propellants for thrusters that help satellites position themselves in space.

"This is a truly interdisciplinary project," Aksay said. "Nowadays the research is so collaborative, if you sit in your office and work all by yourself, you will miss out on a lot."