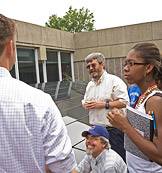 As she surveyed two arrays of solar panels on an upper deck of Princeton's Engineering Quadrangle one recent morning, 12-year-old Olivia honed her skills of skeptical inquiry by peppering her tour guide with questions.

"Which panels worked best, the black or the blue?" she asked. "If everyone had solar panels, would that be good or bad? Are scientists and engineers making solar panels that everyone can afford?"

Olivia, a seventh-grader at Grice Middle School in Hamilton, was among 11 students from Princeton-area middle schools who toured the solar facility as part of a pilot outreach program of the Princeton University Materials Academy.

This pilot program, which runs from July 20-31 and is sponsored by the Princeton Center for Complex Materials and Community House, intends to stimulate interest in science among underrepresented students through hands-on experiments and exposure to scientists and engineers. Participants learn some of the skills required of scientists -- including the importance of asking tough scientific questions.

The Center for Complex Materials, which is funded by the National Science Foundation, offered the materials science academy to high school students in past summers and expanded this year to include middle schoolers.

"If you really want to close the achievement gap in science, you have to interest students before they get to high school," said Daniel Steinberg, education outreach director for the center "We're trying to open their eyes to science. Not all of them will become scientists, but some of them will and hopefully they all will have a better appreciation of science and engineering. This is a first step." 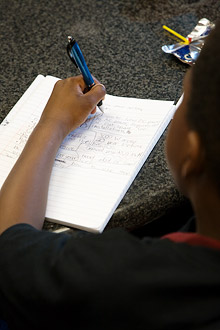 Students who participated in the summer program learned to listen closely to guest speakers and ask questions based on their notes.

Each morning the students conduct experiments, talk with Princeton scientists and tour research facilities. In the afternoons, they attend a writing workshop taught by Chris Collins of Princeton High School and sponsored by Community House, a University program focused on closing the achievement gap among children in the Princeton area.

"People think of Princeton as a rich community, but we have a lot of the same problems of poverty and inequality as more urban areas like Trenton," said Yemi Olorunnipa, a rising junior at Princeton majoring in sociology who works with the students as part of a summer internship with Community House.

Olorunnipa said the students had the most fun during the experiments. Earlier in the week they studied how kinetic energy could be turned into electric energy by putting together a machine that used a hand crank to power a light bulb. In another experiment, lead teacher Steve Carson of John Witherspoon Middle School in Princeton placed a heated platinum rod and alcohol in a beaker. The rod repeatedly ignited the alcohol fumes converting chemical energy into heat.

"It sounded like a little explosion and gave off a flash of light," Olorunnipa recalled. "There were a lot of oohs and aahs."

The tour of the solar panels was given by Darren Hammell, the executive vice president of Princeton Power Systems, an energy company he co-founded with two other Princeton engineering graduates in 2001, the same year he graduated.

The company produces a device called a "grid-tied inverter," which allows raw electricity generated by solar panels to flow smoothly into the main power grid. As the students gathered near the panels, Hammell explained that the company installed the arrays on the EQuad so they could research how to make them more efficient.

Participants in the academy, which opened to middle schoolers for the first time this year, tour an array of solar panels on an outdoor deck of the Princeton Engineering Quadrangle.

Chris, a sixth-grader from Melvin H. Kreps Middle School in East Windsor, touched the warm surface of one of the panels. "I think I can feel the energy going through me," he joked.

In response to Olivia's questions, Hammell said that more research was needed if solar power is to provide a significant percentage of the world's energy demands, but that he thought that day would come. Yes, he told her, the price of solar panels should drop as scientists figure out better ways to make them. And as for the different solar arrays, the blue panels generated more power for their size, but they were more expensive than the black panels.

"So if you don't have a lot of space, the blue panels are better," he said. "If you have lots of space, like in a desert, you'll probably go with the cheaper panels."

The students were scheduled for a visit later in the week to an ultra-clean laboratory where Princeton scientists fabricate tiny structures used in nanotechnology. They would have to wear special suits to prevent contaminating the delicate instruments with dirt. 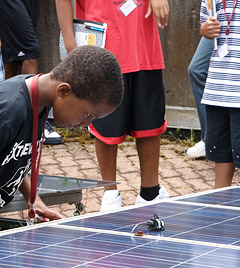 Khalil, a sixth-grader from Kreps Middle School in East Windsor, inspects a device that measures the sunlight striking an array of solar panels used for research.

Khalil, also a sixth-grader at Kreps Middle School, initially seemed less impressed with the solar panel tour. "You could say that Khalil's parents forced him to come to science camp," Khalil said.

But he perked up when Steinberg told him the students were slated to build their own low-cost solar panels with Craig Arnold, an associate professor of mechanical and aerospace engineering, using just conductive glass, toothpaste and berry juice.

"Can it make electricity?" Khalil asked.

"If you can get it to do that," Steinberg said, "you'll be rich and famous."

"And then," Khalil said. "I'll get it to run my PlayStation."