Perspective on: Latino studies and the immigration debate 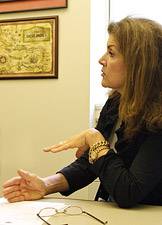 As the first director of Princeton's Program in Latino Studies, Marta Tienda hopes to attract top scholars in Latino history and politics as well as music and literature to explain the social and cultural impact of Latinos in the United States. She also plans to expand the program "and let it contribute to the intellectual vitality of this university."

As the first director of Princeton's Program in Latino Studies, Marta Tienda hopes to attract top scholars in Latino history and politics as well as music and literature to explain the social and cultural impact of Latinos in the United States. She also plans to expand the program "and let it contribute to the intellectual vitality of this university."

Title: Maurice P. During Professor in Demographic Studies, professor of sociology and public affairs, and director of the Program in Latino Studies

Scholarly focus: Racial and ethnic differences in various facets of social inequality -- from poverty and welfare to education and employment

You are the director of the Program in Latino Studies, which is in its first year. How and why did you get involved?

There was a push on campus; our students and alumni wanted it. Latinos are the fastest-growing segment of our society, and they're not completely understood. Having a program that focuses on the intellectual foundations of this emergent, growing, profound social phenomenon seemed like an essential addition at Princeton. And given what my research has been about for the past few years, I thought that I should do it (with a ton of help from colleagues).

What are your plans for building and enhancing the program?

The priorities that I hope could be worked on with other departments are finding top scholars in Latino history and politics, and making sure that we strengthen our humanities offerings to represent music and literature as well as the dance and performance studies that [Assistant Professor of English and African American Studies] Alex Vazquez does. She has been a terrific addition to this campus, and we want to make sure that the humanities and the social sciences have good balance to explain the cultural impact, as well as the social impact, of Latinos in the United States.

I want to grow the program and let it contribute to the intellectual vitality of this university. Students have to find out about it, and it takes a while for the word of mouth to spread. For me, it will be a success if we get students who are not of Hispanic background in the certificate program. Then it can have the spillover effects with other programs that explore the meaning of race in this country; how we construct identity; how immigration plays into that and re-divides groups; and how new settlement patterns are transforming the ethnic landscape.

You’ve just begun two new projects on immigration and migration. Can you tell us more?

The real opportunity for improving life chances of immigrant children must focus on the young ages, especially before age 9 or 10. Child migration is increasing all over the world. Our research on the children of immigrants is a cross-national comparison of Canada, the U.K., Australia and the U.S., as well as Spain and probably France and Germany. The list includes the largest immigrant-receiving countries, four of them English-speaking. We want to compare how child migrants fare in these countries.

Another phenomenon that interests me and that nobody is paying attention to is elderly migration. Our policies allow citizens to bring their parents to this country, but the support demands that we require are very low. After five years elderly migrants are eligible for all of our social programs. Nobody is going to argue against bringing in grandparents, but they come with a very high price tag. I want to get a sense of the dimensions of the phenomenon, why it isn't being addressed and what the opportunity costs are when we look at what we call dependents -- the young and the old. The young at least can contribute to longer-term productivity. Does that change how we think about who we let in, when and under what circumstances?

President Obama has talked about passing immigration reform in 2010. How do you think that the debate will be different from the debates during the Bush administration?

Tienda has been engaged with research in Latino issues as well as outreach and education efforts with students, such as "Voz Latina: A Symposium on Latinos in America," held at Princeton in 2008.

What do you enjoy most about teaching and working closely with students?

When you push students within what you know they're capable of doing, insist on the highest standards, and they continue to grow -- to me that's indescribable. What I've learned in all these years -- and I've been teaching 33 years now -- is that you find out many years afterward that you changed somebody's life when you weren't even aware you were doing it. And especially when they're students who didn't believe in themselves, who faced many of the same insecurities I did as a first-generation student with a very poor background and parents with almost no education, that to me is particularly important in opening the pathways to leadership.