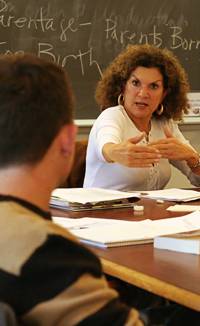 At the start of the fall semester, sociologist Marta Tienda asked students in her freshman seminar on “Hispanics and the American Future” to identify their own racial backgrounds. Among the dozen students in the course, responses included:

These varying degrees of self-identification illustrate the difficulty of trying to fit people of diverse heritage into neat categories, Tienda said in revealing the results to the class several weeks later. Building on that challenge, Tienda and her students are investigating the multifaceted nature of the U.S. Hispanic population and its changing role in American society.

In 2003, news reports trumpeted the U.S. Census Bureau’s announcement that Hispanics surpassed African Americans as the country’s largest minority group. Current demographic trends indicate that nearly one in five U.S. residents will be Hispanic by 2025. Reflecting this shift, the seminar examines anticipated changes in the country’s economic, social, cultural and political landscape as the white population ages and the growing Hispanic population becomes more geographically dispersed.

During a recent session, students tackled the subject of “Hispanicity,” with Tienda leading an active discussion on topics such as the development of racial and ethnic categories for Hispanics and other immigrant groups in America and the changing self-perceptions of Hispanic Americans of different generations.

“Ultimately,” Tienda said, “ethnicity is a social construct. ‘Hispanics’ don’t exist in Latin America. … Hispanicity was made in the USA.”

She and the students noted that people whose families come from various countries in Central and South America can find a common ground in language. But while that may unify the U.S. Hispanic population in one dimension, it also may hinder its socioeconomic and political development, at least temporarily.

“Language is the purveyor of culture. Even though there are different dialects, we can understand each other,” Tienda said. “Use of language unifies Hispanics, but does it retard assimilation? If so, is this a permanent or transitory setback?”

The students are exploring whether future generations of Hispanics will realize new opportunities for social inclusion and political participation, or whether racial and ethnic divisions will widen. The seminar includes class discussions and reading assignments on issues such as undocumented immigration, diversity on the Princeton campus and in the local communities and the “core values of fairness, inclusion and the fabric of our democracy,” Tienda said.

“I deliberately mixed reading materials from political interest groups, academic publications and various types of journalism to make the point about the need to require standards of evidence to support claims,” said Tienda, who is the Maurice During ’22 Professor in Demographic Studies and a professor of sociology and public affairs.

“Students will not be provided syllabi after they leave Princeton, and they will be bombarded with all sorts of ‘information.’ Learning to be discriminating and discerning is very important,” she said.

The seminar, which is designated as the Peter Joseph Freshman Seminar in Human Values, attracted freshman Jake Miller because his hometown of Asheboro, N.C., has experienced significant growth in its Hispanic population.

“I was interested in hearing about other students’ experiences with immigration in their hometowns, as well as sharing my own, as our influx has greatly changed the town dynamic,” he said.

Vanessa Rodriguez, a freshman from San Antonio, Texas, said the seminar has addressed “things I’ve never learned in history books. I have been able to see how America was settled from the Hispanic point of view, which has been amazing.”

With a group of students representing many backgrounds, the seminar has been eye-opening, Rodriguez said. She said Tienda “has guided us as a group through a lot of intellectual growth.”

“I think I come from a very sheltered area, where I look around and see a lot of Hispanics,” Rodriguez said. “Now I’m coming to where I realize that there are other cultures and nationalities that care about the Hispanic situation, too, because the effects are going to be universal. To hear different perspectives is so refreshing.”

Perspective on: Latino studies and the immigration debate