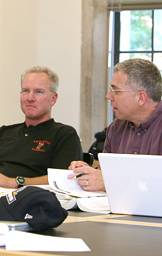 "The Making of Modern Baseball," a new course taught by (from left) Scott Bradley, Princeton's varsity baseball coach, and William Gleason, an associate professor of English, examines issues such as race, economics and globalization that have had a major impact on the sport. Bradley brings experience as a major league player and college coach to the course, while Gleason offers his perspectives as a scholar and lifelong fan.

For Princeton students interested in the evolution of the game of baseball, a new course this semester not only offers academic views on America's pastime but the perspective of a career on the field.

"The Making of Modern Baseball," a seminar in the Program in American Studies, is led by William Gleason, an associate professor of English and lifelong Los Angeles Dodgers fan, and Scott Bradley, a former major league catcher now in his 12th year as Princeton's varsity baseball coach. The course focuses on major themes in the sport's history -- including race, economics and globalization -- and traces their historical roots and their impact on the game today.

The course is Bradley's first as a formal instructor at Princeton, but not his initial foray into the classroom. In 2001, Gleason led a student-initiated seminar on baseball and American culture. Many of those students were members of Princeton's varsity team -- including Chris Young, now an All-Star pitcher for the San Diego Padres -- and Gleason invited Bradley to sit in on a few classes to offer his insights.

"His love of the game and knowledge of the history of the game was so clear," Gleason said. "We talked a lot after that class about how much fun it was and how someday we should do it again together."

Their friendship has grown over the years, with Bradley inviting Gleason to serve as a faculty fellow for the baseball team, and their schedules finally enabled them to offer the seminar this fall. While they agreed that baseball's history is an integral facet of fans' relationship with the sport, they wanted the course to examine how its changes both on the field and as a business have shaped the game as it is played and viewed today.

"We didn't want to do the typical course on baseball history from start to finish," Bradley said. "We thought what would interest everybody was if we picked out some of the really important topics in baseball today and then tracked them backward."

The seminar is divided into four topics: "Race and Ethnicity," ranging from Jackie Robinson breaking the color line for African Americans in 1947 to the increasing presence of Latino players to the more recent influx of Asian major leaguers; "Labor and Economics," including free agency, skyrocketing player salaries, labor disputes and competition between small- and large-market teams; "Geography and Place," focusing on franchise relocation and expansion as well as stadium design and funding; and "Community and Culture," examining sports journalism, fantasy sports and fans' fascination with more complex statistics.

"We have used this metaphor of taking the lid off the modern game," Gleason said. "If we could look inside, what makes the game the way it is as we experience it today and as the students are experiencing it today?"

The students discuss baseball's changing demographics during a recent session of the class.

The students are exploring these topics by reading works by historians, journalists and economists and viewing documentaries. While Gleason offers the perspectives of a scholar and fan, Bradley weaves in his own experiences as a player (he played for four major league teams from 1984 to 1992) and coach (he has led Princeton to five Ivy League titles and has had several players selected in the major league draft). Bradley also is leveraging his connections in the sport to bring in well-known baseball writers from ESPN and Sports Illustrated to speak with the class later this semester.

Gleason and Bradley chose 16 students for the seminar from some 50 applicants. Most of the students are certificate candidates in American studies and represent a range of concentrations, including classics, chemical engineering, economics, psychology and politics. "We tried to mix it by who is rooting for what team, what part of the country they're from and what their backgrounds are," Bradley said. "We have a neat mix of people."

Eben Novy-Williams, a junior politics major, met Bradley through his duties as a sportswriter with The Daily Princetonian student newspaper and thought the course would be beneficial as he pursues his career goals in sports journalism.

"This course will undoubtedly help me grasp a better understanding of how the game arrived at its current state, but I am also here as a fan, trying to back up the stats I've memorized with intelligent understanding of the roots of America's pastime," he said.

"I have been a diehard Mets fan since my first game at Shea Stadium in 1993, but over time, as is natural in the transition from adolescent to adult, the relationship changed," Novy-Williams said. "It went from baseball being a fun weekend diversion to a much more complex, interwoven net of issues like race, economics and globalization. ... I have thought about all of these issues on my own, but never with the fine-toothed comb that Coach Bradley and Professor Gleason are using."

Gleason noted that there is much more high-level scholarship on baseball available since 2001, when he taught the student-initiated seminar that ultimately led to the current course. As an example he cited the 2007 book "Playing America’s Game: Baseball, Latinos and the Color Line" by Adrian Burgos Jr., a historian at the University of Illinois-Urbana/Champaign, which reveals details about Latino players' presence in organized baseball well before Robinson broke baseball's color line. 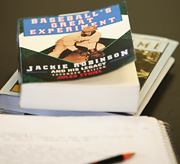 The class is reviewing scholarly works on key issues that have shaped baseball, such as Jackie Robinson’s breaking of the color barrier.

In one recent session of the seminar, Gleason and Bradley used Burgos' book and Jules Tygiel's book "Baseball's Great Experiment: Jackie Robinson and His Legacy" as a springboard to a discussion on baseball's changing demographics. They showed a report on the racial and gender makeup of major league players, coaches and executives by the University of Central Florida's Institute for Diversity and Ethics in Sport, which illustrated -- among other statistics -- the declining number of African American players and the rise in Latino players in the last generation. From 1990 to 2007, for example, the percentage of African American players in the majors dropped from 17 percent to 8.2 percent, while the percentage of Latino players jumped from 13 percent to 29.1 percent.

Bradley pointed out that in his recruiting visits around the country he sees far fewer African Americans involved in baseball than white or Latino players. He noted that former National League president Leonard Coleman, a 1971 Princeton graduate, founded Major League Baseball's Reviving Baseball in Inner Cities (RBI) program to help address that issue.

The instructors fielded more than a dozen possible explanations from students regarding the demographic shift, including the perception of greater opportunities in professional basketball or football for African Americans and better marketing efforts aimed at black youths by the National Basketball Association and National Football League.

Gleason mentioned research by sociologists on how the NBA, beginning with the emergence of Michael Jordan in the 1980s, has marketed its individual stars more effectively than baseball, which has tended to emphasize its historical roots -- a connection that may turn off African Americans who are reminded of the sport's segregated past.

Bradley noted that, in similar fashion to NBA stars in the United States, baseball's top Latino players are treated as mega-celebrities at home. "In those countries now, it's all about baseball -- they market their heroes, like Michael Jordan or football stars here, to their young kids," he said. "I think that's a direct reason why the Hispanic players are involved in baseball the way they are."

Senior Erin Miller, a politics major and varsity softball player, said she was drawn to the class by the opportunity to dig deeper into trends affecting the game and that she has enjoyed the dual perspectives of the instructors.

"You can tell that Professor Gleason is a big baseball fan, that he is passionate about it," Miller said. "Coach Bradley gives you a different experience to talk about, and I think he offers such a great resource that we wouldn't have otherwise. The two of them together is a really good dynamic."

Miller said she shares her father's lifelong affection for the Dodgers, and now this seminar lets her bring back newfound insights about the game to her dad.

"We used to talk about how baseball is so different now from when he watched it as a kid," she said. "Since I've been in this class, he calls me afterward and says, 'Tell me all about it.'"

Bradley and Gleason chose 16 students for the seminar representing a range of concentrations, including classics, chemical engineering, economics, psychology and politics.