Angel Harris, an assistant professor of sociology and African American studies, focuses his research on a rigorous exploration of the educational achievement gap across racial and ethnic groups in the United States. "In order to have more fruitful discourse and policy ideas, we have to focus on explanations that have widespread empirical support," said Harris, shown here in front of Stanhope Hall, the home of Princeton's Center for African American Studies. (Photo: Brian Wilson)

Below: Harris teaches a class on "Race, Social Inequality and Education." "Professor Harris has definitely changed the way I think about the achievement gap, but in some ways, the effect has been disheartening," said one of his students, Alex Barnard, noting that he had hoped there might be a single solution to closing the gap. "Perhaps the most important thing I've learned in the class is that no single remedy will prove to be a panacea."  (Photos: Denise Applewhite)

Angel Harris wants to change the way people think about the academic achievement gap across racial and ethnic groups in the United States -- an issue that he understands intimately, having struggled to make it through high school himself.

Now an assistant professor of sociology and African American studies at Princeton, Harris is seeking to debunk current theories about the achievement gap that he has found to be implausible.

"It's a huge national issue," Harris said, noting that the gap in academic skills and success between black and white students has a significant impact on their earning potential as adults. The disparity remains large, pervasive and persistent, with many black 12th-graders typically performing on a level equivalent to many white eighth-graders, according to Harris. Even using the most optimistic predictions, the gap in reading abilities is expected to remain for at least six decades and in terms of mathematics achievement is likely to last even longer, perhaps a century, he said.

For Harris, the issue of why many black youths tend to lag in school is personal as well. Once an underperforming high school student, he had to be pushed into college by a friend's family, which ultimately awakened his passion for education.

"Angel Harris has a high-quality and energetic research agenda in the area of sociology of education, with a specific interest in the urgent question of the achievement gap in primary and secondary education," said Valerie Smith, director of the Center for African American Studies. "He is deeply committed to mentoring graduate and undergraduate students alike, and he is dedicated to working on one of the most pressing social policy issues we face as a nation."

In the past, explanations for the genesis of the gap have included genetic differences in intelligence among racial groups, differences in socioeconomic resources, biases in standardized testing and the idea of "bad" culture. But the genetic hypothesis -- the subject of the controversial 1994 bestseller "The Bell Curve" -- has been largely dismissed as without merit, Harris noted. Resource differentials account for only one-third of the gap and the difference in academic achievement exists on many measures beyond standardized tests, he added.

This leaves the idea of "bad" culture, or "oppositional culture theory," which was first proposed by anthropologist John Uzo Ogbu in 1978. The theory, which is widely accepted in many academic circles, purports that the markedly lower academic success of blacks, in comparison to whites, is a result of black students' resistance to schooling and intentionally sabotaging their educations in fear of "acting white."

Using rigorous quantitative analyses of national data sets, Harris is poking and prodding the theory from all sides, painstakingly teasing apart a multitude of variables. Despite the pervasiveness of oppositional culture theory in academic and mainstream discourse, he has found no evidence for many of its predictions. For example, he has sought to disprove the theory's suggestions that whites have better preschool attitudes (he asserts the opposite is actually true) or that misbehavior in school is the primary cause of black students' lower academic achievement. Harris has published a number of articles on the subject, including forthcoming papers in the journals Social Science Quarterly and Sociology of Education. 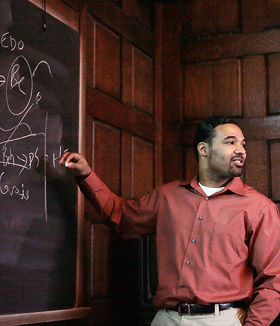 "I am surprised by how overwhelming the evidence is against this framework," he said. "The dominant factor used to explain the achievement gap is oppositional culture. It is time to look at other explanations and not just focus on one thesis. In order to have more fruitful discourse and policy ideas, we have to focus on explanations that have widespread empirical support."

Raised by his grandparents, Harris grew up in the projects of Brooklyn, N.Y. He attended a local Catholic school from kindergarten through eighth grade and entered the public system for his high school years at the Manhattan Center for Science and Mathematics in Harlem. At the time, he was ranked in the bottom 20 percent of his class, and college was nowhere on his radar screen.

"I was actually going to be a mortician," he said. "I figured it was a way to be financially secure -- you'd never run out of business."

But his friend's twin aunts convinced him to apply to college during his senior year of high school, and he half-heartedly filled out a few applications. Much to his surprise, he was accepted by Grambling State University, a historically black institution in Grambling, La. He had no idea where Louisiana was, and he had no intention of enrolling at Grambling after graduating high school in 1993.

But the aunts were persistent in encouraging Harris to attend college -- so much so that they even drove him for 24 hours straight to Grambling in their 1993 Crown Victoria. (It was Harris' first time on an interstate.) When they arrived in Louisiana, the women dropped Harris off with $30, a duffel bag of his belongings and all their best wishes.

"It was the first time I ever left New York," Harris said. "Once I got there, I realized what an opportunity I had. At Grambling, I experienced firsthand how education can really change people's lives, particularly if they're coming from a lower socioeconomic background. I wanted to know why some people are able to succeed while others are not."

After one year as an assistant professor at the University of Texas-Austin, in 2007 Harris joined the Princeton faculty.

At a recent meeting of Harris' course, "Race, Social Inequality and Education," a student asked Harris about his research agenda.

"I want to change the discourse," Harris responded. "It's important to change how problems are conceived -- that is just as important as policy itself and will lead to different policy decisions in the future."

Alex Barnard, a junior sociology major, was drawn to the course because he sought new perspectives on the achievement gap.

"Professor Harris has definitely changed the way I think about the achievement gap, but in some ways, the effect has been disheartening," Barnard said, noting that he had hoped there might be a single solution to closing the gap. "Perhaps the most important thing I've learned in the class is that no single remedy will prove to be a panacea."

Harris is currently developing alternate explanations to oppositional culture theory to explain the achievement gap. For example, he has demonstrated that differences in skills acquired at an early age, rather than misbehavior in the classroom, may be a major factor causing the lower academic success of some blacks. These differences in prior academic skills, which are largely related to race, account for 70 percent of the achievement gap observed in high schools across America, while differences in schooling behaviors contribute to only 13 percent of the difference in achievement between blacks and whites, he said.

Next, Harris intends to probe the reasons for the skills disparity -- exploring whether people who value education for different reasons have particular parenting styles that may influence the academic success of their children. 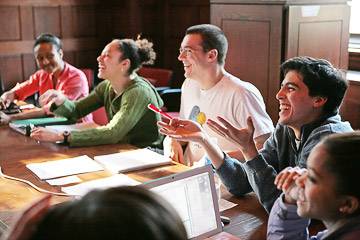 Though his hypothesis is "still largely in the realm of speculation," Harris suspects that the children of parents who value education intrinsically will develop far greater academic skills.

"If this difference in skills develops at the first- or second-grade level, the achievement gap is just going to snowball as time goes on," he said.

This methodical approach to sociological problems is a hallmark of Harris' research, according to his colleague Marta Tienda, the Maurice P. During Professor in Demographic Studies and professor of sociology and public affairs.

Tienda and Harris are currently collaborating on work to explore the top 10 percent law in Texas, which guarantees admission to state universities to students who graduated in the top 10 percent of their high school class. Tienda and Harris seek to determine why the law has been less effective than affirmative action with regard to the number of Hispanics enrolling in college.

"I've been impressed by the clarity of Angel's approach and thinking about problems," Tienda said. "He devises unique ways of adding value to questions that others have addressed. By the time Angel is finished with a problem, you know the case is closed."