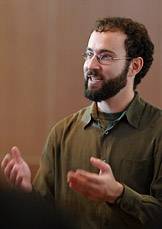 Danny Oppenheimer, an associate professor of psychology and public affairs, loves teaching "Introduction to Psychology." "Every time I teach the class, it reminds me why I went into psychology, because the class covers the most interesting and fun stuff in the field," he said. "This is most students' first exposure to psychology, and it's great to see them get excited and passionate about it." (Photo: Denise Applewhite)

In unearthing discoveries about how the human mind works, Princeton psychologist Danny Oppenheimer has mined insights into how people react to catchy stock-market symbols, overwritten essays and charitable donation choices.

These are part of an inventive mix of subjects that Oppenheimer tackles with creative experiments to generate significant findings about human decision-making. He carries out his studies with a level of energy and devotion that is equally on display in the laboratory, in the classroom and in informal interactions with students that extend to the volleyball court and the theater.

"Danny is contagiously enthusiastic about research, an exuberant teacher and a devoted contributor to his students' lives, both academic and extracurricular," said Eldar Shafir, acting chair of the psychology department and the William Stewart Tod Professor of Psychology and Public Affairs. "His studies are clever and insightful, and they reveal important facts about our everyday perceptions."

His research focuses on understanding how human beings make decisions in various settings. For example, a study he conducted on the ease of processing information yielded revealing findings about how people determine in which stocks to invest.

In the study, Oppenheimer examined the three- or four-letter stock-ticker symbols that identify companies on the New York Stock Exchange and the American Stock Exchange to test how people's judgments of value are affected by how easily they can process information. He found that, soon after an initial public offering, stock prices were higher for companies that had pronounceable ticker symbols (such as Rite Aid Corp.'s RAD versus Reader's Digest Association Inc.'s RDA). Oppenheimer and one of his graduate students, Adam Alter, published their results in the Proceedings of the National Academy of Sciences in 2006. The findings since have been replicated by researchers on stock markets in several other countries.

"Danny's research shows, powerfully and persuasively, that choices and decisions depend not just on what people think about, but also on how they feel while they are thinking, and on how they interpret those feelings," said Deborah Prentice, the Alexander Stewart 1886 Professor of Psychology. 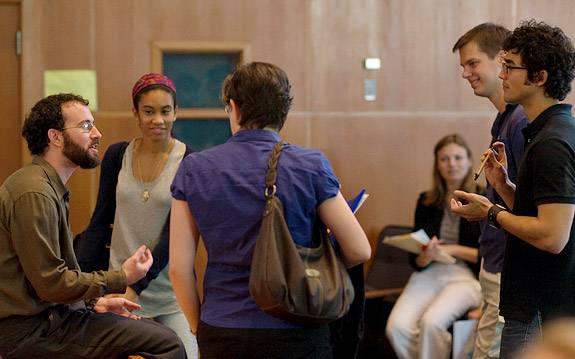 Oppenheimer captures students' attention by showing optical illusions and tossing bags of M&Ms to those who volunteer to be part of classroom demonstrations. (Photo: Denise Applewhite)

Oppenheimer injects fun into his studies of human behavior. His paper on the use of long words is titled "Consequences of Erudite Vernacular Utilized Irrespective of Necessity: Problems With Using Long Words Needlessly." The study found that using long words unnecessarily detracts from a reader's evaluation of a piece of writing.

"People can rate something as very intelligent if it has long words in it, but if you use simpler language, they rank it as even more intelligent," he said.

The paper, published in 2005 in the journal Applied Cognitive Psychology, received international media attention and garnered a 2006 Ig Nobel Prize. The Ig Nobels, which honor "research that makes people laugh and then think," are bestowed by the scientific humor journal Annals of Improbable Research and presented annually at Harvard University.

Oppenheimer is the co-editor of an upcoming book that reports some surprising results of studies of charitable giving. "The Science of Giving: Experimental Approaches to the Study of Charity" is a collection of research reports that discern what factors affect people when they are deciding to make donations.

In one study conducted by Oppenheimer, subjects were told about several charities' efficiency rates — the percentage of each dollar donated that goes directly to the cause, rather than to overhead for the organization. When given a choice between several charities — one with a lower efficiency rate, one with a higher rate and one that did not publish its rate — the subjects in the study chose to donate the most money to charities that did not release any efficiency information.

"A lot of websites for charities proudly proclaim how efficient they are, but we've shown that that's going to hurt their ultimate donation rates," Oppenheimer said. "I hope that having empirical data in the public domain will allow charities to be more effective in their fundraising."

Oppenheimer's involvement with students goes beyond the classroom. He is a faculty fellow — and devoted fan — of the men's and women's volleyball teams. (Photo: Courtesy of Danny Oppenheimer)

Engaging in class and on the court

Oppenheimer's enthusiasm for his research is reflected in engagement with students in the classroom, where he is "one of the most popular and effective teachers we have" in the psychology department, Prentice said.

His lectures are "fast-paced and unpredictable," according to senior Connor Diemand-Yauman. "You can sense an almost palpable level of enthusiasm for the subject matter."

When teaching "Introduction to Psychology," Oppenheimer grabs the class's attention by showing optical illusions and tossing bags of M&Ms to students who volunteer to be part of classroom demonstrations. He even brings a 5-year-old into class to demonstrate how children's mental abilities differ from those of adults.

"Every time I teach the class, it reminds me why I went into psychology, because the class covers the most interesting and fun stuff in the field," Oppenheimer said. "This is most students' first exposure to psychology, and it's great to see them get excited and passionate about it."

He is "by far one of the best and the most captivating professors I've ever had," said senior Jenni Newbury. "He is the reason I became a psychology major. He makes the material fun, engaging and meaningful."

Oppenheimer also teaches in the Woodrow Wilson School of Public and International Affairs, where he currently is leading a task force for undergraduates on higher education testing issues. Applying his expertise in psychometric testing, Oppenheimer is guiding the students through an exploration of the various approaches to evaluating higher education quality. The class will prepare a report that makes recommendations about which testing strategies schools and governments should be using.

In his lab, Oppenheimer does much of his work in conjunction with graduate students, whom he regards very highly.

"Students here are like peers, not like students," he said. "I really collaborate almost exclusively with my students."

Graduate student Anuj Shah, who selected Oppenheimer as his adviser, said he values how available he is for conversations and advice.

"I chat with him almost every day," Shah said. "I can go knock on his door and he'll invite me in for a chat, and I don't consider the week complete unless I've had a couple of solid talks with him about research or things beyond the department."

Shah also credits Oppenheimer with encouraging him to pursue a wide-ranging approach to his research.

"He has always pushed me to go after big questions," said Shah. "It's a hard approach for me, and it doesn't always bear fruit. But I like to think that this approach and his advising have gradually made me a stronger thinker. "

Oppenheimer's involvement with students goes beyond the classroom. He is faculty fellow — and devoted fan — of the men's and women's volleyball teams, and likes to attend student dance and theater performances.

Taylor Carroll, a senior who is captain of the women's team, said Oppenheimer "will go above and beyond to help us out in any way that he can. He has been an extremely valuable resource, teacher and friend to our team." In addition to advising players on academic issues, Oppenheimer, who played intramural volleyball at Stanford, attends most games and some practices to offer encouragement to the teams.

Oppenheimer also enjoys being in the audience for concerts and theatrical performances in which his students participate.

"One of the biggest perks of Princeton is that the students are so multidimensional and multitalented," he said. "It's much more fun to see a show or a sporting event if I have a student to root for."

Oppenheimer's dedication to his students' academic and extracurricular lives makes him a valuable mentor, students said.

"He can put on his 'professor hat' and pick out every weak point in my independent work while challenging me to think more critically and creatively, and then play me in volleyball in the Mathey courtyard," said Diemand-Yauman. "That's a rare combination in a professor."

Font focus: Making ideas harder to read may make them easier to retain