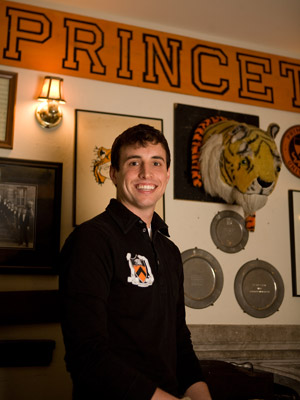 Princeton senior Connor Diemand-Yauman has been named the winner of the University's 2010 Moses Taylor Pyne Honor Prize, the highest general distinction conferred on an undergraduate.

He will be recognized at a luncheon during Alumni Day on campus Saturday, Feb. 20.

Diemand-Yauman, who is from Chesterland, Ohio, is majoring in psychology. He is writing a senior thesis that his adviser expects will be published in a top-tier journal. He served as president of his class during his freshman, sophomore and junior years, and was elected president of the undergraduate student body in 2009. He has championed various initiatives, including creating with President Shirley M. Tilghman a task force on the relationship between the University and the eating clubs, instituting a gender-neutral housing pilot project, implementing measures to help foster understanding about Princeton's grading policy, revising the pass-D-fail policy and reallocating Undergraduate Student Government (USG) funds for student-initiated service projects.

"I never considered that I would actually be in the running for this distinction so I was floored when I first heard the news," Diemand-Yauman said the day after he was informed. "It's wonderful to be recognized for academic and extracurricular work that was intrinsically rewarding from the start."

His senior thesis tests a theory on learning and retention. He conducted a field study with 250 students in 15 classrooms at a high school and is analyzing the data for papers that will be submitted not only as his thesis, but also for presentation at international conferences and for publication in prestigious journals. One already has been accepted for presentation at the fourth annual International Conference on Psychology to be held in May in Athens, Greece.

"Connor's independent work is among the upper echelon of theses that Princeton students produce," said Danny Oppenheimer, associate professor of psychology and public affairs, who is his adviser. "It is a legitimate piece of scholarship in its own right that has the potential to be very influential in both psychology and education, and has both theoretical and real-world importance."

Faculty members have described Diemand-Yauman's contributions to their classes as "insightful, sensitive and probing." In a letter of support, Ronald Comer, lecturer on continuing appointment in psychology, wrote that he is "friendly, engaging, remarkably energetic, caring of others and truly committed to helping others" and that he "listens carefully and sensitively and, at the same time, presents his own points in a very articulate and caring manner."

Those characteristics have been vital to his efforts outside of the classroom.

In 2007, he and classmate Jenni Newbury co-founded Princeton Disability Awareness, a group that organizes annual large-scale events to bring disabled children and their families to campus. They have trained hundreds of student volunteers to work one-on-one with the children while their parents engage with Down syndrome-related exhibitors. The following year, he organized the Own What You Think Campaign against online gossip and anonymous character assassination. The campaign spread to 10 other campuses and was featured in national media, including ABC-TV's "20/20," PBS's "Frontline" and Glamour magazine.

As the leader of Princeton's 5,000 undergraduates, Diemand-Yauman began his USG presidential term by working to improve the group's relations with the student body and with administrators. He organized the USG into working groups that collaborated successfully with faculty and administrators to bring about change.

"He is not what I would term a 'radical' political force, demanding instant change or insisting that the University act immediately on a particular issue," said Michael Litchman, lecturer in psychology, in supporting his candidacy for the award. "Rather, he successfully works within the system, and what he accomplishes is radical in that the entire undergraduate student body benefits."

With the grading policy, his work resulted in the creation of an online vehicle on the Career Services website through which a student can request that an explanatory booklet and cover letter on the policy from Dean of the College Nancy Malkiel be sent to an employer, internship program or graduate or professional program. The USG also sent a clarifying letter to the faculty about the policy in the fall.

In an interview with The Daily Princetonian about Diemand-Yauman's record as USG president, Malkiel said, "[Connor] has identified a need (or a situation to be improved, or a problem to be solved); he has proposed responses/proposals/solutions; he has been a real collaborator, willing to listen and incorporate in his efforts substantive or strategic advice about how best to accomplish his objectives. In the process, he has in fact accomplished important things that redound to the clear benefit of the undergraduate student body.

"To my mind, that's real leadership: responsive to student needs; clearheaded in identifying problems susceptible to constructive action; imaginative and creative in fashioning proposals for change; willing to partner with administrators to realize his goals," she added.

Diemand-Yauman also has led initiatives addressing the University's alcohol policy and New Jersey's alcohol legislation. He founded the compact fluorescent light bulb exchange program in 2007, which is now an annual event sponsored by Greening Princeton and has distributed some 3,500 energy-efficient light bulbs to the campus community. He has served on the University's Honor Committee and the Council of the Princeton University Community. And he has been president and performance director of the Nassoons a cappella group and an actor with the Princeton University Players.

As the Princeton mentor-manager of Batiq, Diemand-Yauman has tutored by webcam students from South Korea who were interested in attending universities in the United States. He also spent a summer in Seoul acting in and writing skits for Korean PBS. Last summer, he volunteered with the Global Literacy Project as a teacher at a farm school in Randfontein, South Africa.

Next year, he hopes to volunteer with the Global Literacy Project in St. Vincent and the Grenadines. After that, he intends to accept an offer to write and act on his own children's English educational show on Korean PBS.

"I feel humbled and extremely honored to be receiving this distinction and am indebted to everyone who has so selflessly helped and guided me along the way," Diemand-Yauman said. "This is as much their award as it is mine."

Font focus: Making ideas harder to read may make them easier to retain

University policies support individuals with disabilities, in compliance with ADA