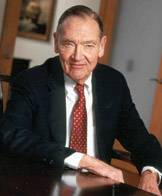 With the gift of a new dormitory in Princeton's Butler College, John (Jack) C. Bogle, a 1951 graduate of the University and the founder of the Vanguard Mutual Fund Group, has added his name to the campus vocabulary. Students now eat, sleep, study and socialize in Bogle Hall, and some even monitor sustainability experiments on its green roof.

For Bogle, who came to Princeton in the fall of 1947 as a scholarship student, the gift is a tribute to the University that launched him on his career. It is also, he believes, a way to give other students the same chance he had, and perhaps inspire them to do the same for others.

Bogle Hall is located centrally in the redeveloped college and was completed with four other dormitories in fall 2009. It houses 20 undergraduate and four graduate students and has a roof planted with succulent sedum to decrease stormwater runoff and improve heating and cooling efficiency. The lower floor is Butler Commons, the college's social space.

"We are very grateful to Jack Bogle for both his many years of steadfast support of Princeton and for this gift of Bogle Hall, which is enhancing the residential life experience for students today, and will continue to do so for generations to come," said President Shirley M. Tilghman.

Bogle has a long history of generosity to Princeton, from funding the Class of 1951 Directorship of the Pace Center to creating the Bogle Brothers Scholarship Fund, which has supported more than 125 undergraduates at Princeton. He served as class president from 1971 to 1976 and won the Alumni Council Award for Service to Princeton in 1976. In 1999 he received the Woodrow Wilson Award, which is bestowed annually upon an undergraduate alumnus or alumna whose career embodies the call to duty in Wilson's famous speech, "Princeton in the Nation's Service."

He hopes having his name on Bogle Hall will inspire students to follow the example of a Princetonian who found ways to build a better financial world. "Princeton's role in my life has been central to whatever I may have accomplished," he said.

The gift is part of Aspire: A Plan for Princeton, a comprehensive fundraising campaign launched by the University in November 2007 to raise $1.75 billion over five years.