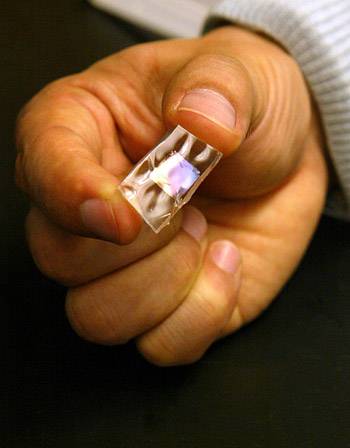 Yi Qi, a postdoctoral researcher at Princeton University, holds a piece of silicone rubber imprinted with super-thin material that generates electricity when flexed. The technology could provide a source of power for mobile and medical devices. (Photos: Frank Wojciechowski)

The material, composed of ceramic nanoribbons embedded onto silicone rubber sheets, generates electricity when flexed and is highly efficient at converting mechanical energy to electrical energy. Shoes made of the material may one day harvest the pounding of walking and running to power mobile electrical devices. Placed against the lungs, sheets of the material could use breathing motions to power pacemakers, obviating the current need for surgical replacement of the batteries that power the devices.

A paper on the new material, titled "Piezoelectric Ribbons Printed Onto Rubber for Flexible Energy Conversion," was published online Jan. 26 in Nano Letters, a journal of the American Chemical Society. The research was funded by the U.S. Intelligence Community, a cooperative of federal intelligence and national security agencies.

The Princeton team is the first to successfully combine silicone and nanoribbons of lead zirconate titanate (PZT), a ceramic material that is piezoelectric, meaning it generates an electrical voltage when pressure is applied to it. Of all piezoelectric materials, PZT is the most efficient, able to convert 80 percent of the mechanical energy applied to it into electrical energy. 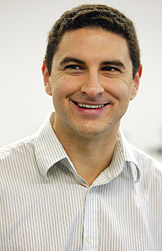 "PZT is 100 times more efficient than quartz, another piezoelectric material," said Michael McAlpine, an assistant professor of mechanical and aerospace engineering at Princeton, who led the project. "You don't generate that much power from walking or breathing, so you want to harness it as efficiently as possible."

Fabrication starts with the researchers producing PZT nanoribbons -- strips so narrow that 100 fit side-by-side in a space of a millimeter. In a separate process, they embedded these ribbons into clear sheets of silicone rubber, creating what they call "piezo-rubber chips." Silicone, which is used for cosmetic implants and medical devices, already is biocompatible. "The new electricity-harvesting devices could be implanted in the body to perpetually power medical devices, and the body wouldn't reject them," McAlpine said.

In addition to generating electricity when it is flexed, the opposite is true: The material flexes when electrical current is applied to it. This opens the door to other kinds of applications, such as use for microsurgical devices, McAlpine said. 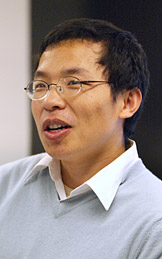 "The beauty of this is that it's scalable," said Yi Qi, a postdoctoral researcher who works with McAlpine. "As we get better at making these chips, we'll be able to make larger and larger sheets of them that will harvest more energy."

Qi and McAlpine collaborated with Habib Ahmad of the California Institute of Technology along with Noah Jafferis, a Princeton graduate student in electrical engineering; Kenneth Lyons Jr., an undergraduate at Morehouse College who worked in McAlpine's lab; and Christine Lee, an undergraduate at Princeton.

McAlpine joined the Princeton faculty in 2008 after completing a postdoctoral fellowship at Caltech, where he focused on nanotechnology-enabled hybrid sensors for medical applications. He received his doctorate in chemistry from Harvard University in 2006.