Firsthand sources and empirical data drive Jacob Shapiro's work on terrorist groups and counterterrorism. Shapiro, an assistant professor of politics and international affairs, is leading an effort to archive data on conflicts as a resource for other researchers and heading a major research project on political violence, governance and development.

As a graduate student a few years ago, Jacob Shapiro worked with a colleague to get internal documents from al-Qaida released from a U.S. government database. The files didn't reveal national security secrets -- but they did portray the terrorist organization as a bureaucracy with plenty of red tape.

"This stuff was very useful in terms of demystifying these groups, because you see them arguing about the formatting of expense reports and other mundane issues," said Shapiro, an assistant professor of politics and international affairs in the Woodrow Wilson School of Public and International Affairs.

This data- and document-driven approach exemplifies Shapiro's work on the organization of terrorist groups and counterterrorism. Shapiro, who joined the Princeton faculty in 2008, has co-founded the Empirical Studies of Conflict Project to make more data about conflict available for research. He is collaborating with individuals in academia, government and the military on the project, through which he also hopes to inform public policy decision-making.

The group's primary research project examines the relationship between terrorism, governance and development. Funded by an $8.6 million grant from the Defense Department, it involves data analysis, surveys and field experiments in conflict-affected areas from Northern Ireland to Pakistan.

Shapiro is breaking new ground, according to Jennifer Widner, a Princeton professor of politics and international affairs and director of the Bobst Center for Peace and Justice.

"The study of why people turn to violence, why they turn away from violence, is something that political scientists often haven't looked at [by] looking at survey research and field experiments, and he does both," Widner said. "There are a lot of surveys and experiments being done around the world, but very few are in areas of hard conflict. It's hard to do and hard to do it well."

Shapiro and a friend, U.S. Army Col. Joseph Felter, had been thinking about creating the Empirical Studies of Conflict Project for about five years before it became a reality in 2009. In graduate school, Shapiro was discouraged from studying terrorism because of the difficulty of getting good data.

"Lots of the intellectual brainpower that we have in the country isn't applied to studying conflict, because to work on it seriously requires a one- to two-year investment just in building data before you even get into doing the analysis," he said.

Shapiro received his Ph.D. in political science from Stanford University in 2007. He had been a research fellow at the Combating Terrorism Center at the U.S. Military Academy, was awarded fellowships by Stanford's Center for International Security and Cooperation and the Stanford Center on International Conflict and Negotiation, and had served in the U.S. Navy and Naval Reserve.

As the group members collect data for their individual projects, they will make it available for other researchers through their data archive. They also are working with their contacts throughout government to release additional data. Currently, government contractors hold data and conduct analysis, or the government holds it and doesn't have the resources or staff expertise to analyze it. In either case, Shapiro said, there's no peer review challenging or improving the analysis.

"What you want is lots of people independently looking at the data," he said. "What they're going to study with it, who knows? But some portion of it is going to be relevant for policy."

Nils Weidmann, one of two Princeton postdoctoral research associates working on the Empirical Studies of Conflict Project, is studying election fraud and violence in Afghanistan's recent presidential election and the role of cell phone communications on information and violence in Iraq.

"Jake (Shapiro) has detailed case knowledge, and at the same time is extremely skilled in the methods to study violence statistically," said Weidmann, adding that having so many people with practical experience involved in the project "not only links our thinking to the reality on the ground, but also helps communicate our findings to the key decision-makers."

Zeynep Bulutgil, the other Princeton postdoctoral research associate working on the project, said that as more detail becomes available, more avenues for study are open to researchers.

"What this project provides is fine-grained data about small locales within different countries. It lets us study violence in a more detailed way and allows us to observe patterns that we might not see at the level of countries," said Bulutgil, who is studying sectarian violence in Iraq and seeking data on ethnicity. 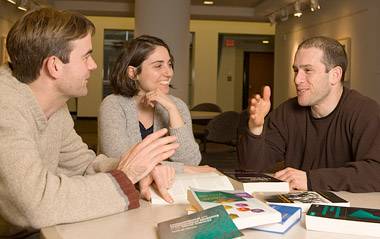 While studying reconstruction spending in Iraq -- how violent groups were responding to the spending and what that revealed about their organization -- Shapiro and his collaborators from the Empirical Studies of Conflict Project realized that larger questions needed to be asked about development.

Though the United States allocated billions of aid dollars to rebuild the economies of Iraq and Afghanistan, little research existed on the effectiveness of development programs, and less so in areas wracked with violence. They sought and secured a grant in the new Minerva Initiative, which is intended to develop the Defense Department's social science intellectual capital in order to enhance its ability to address future challenges. While the Defense Department is funding the research, it has placed no restrictions on the direction of the work and will not review it prior to publication, Shapiro said.

The work in such areas is challenging, but Shapiro saw important reasons to press forward.

"There's a general public good interest in understanding how you can use this [aid] effectively," Shapiro said. "We also thought that in the course of studying what kind of aid reduced violence and where, we actually got a lot of leverage on basic social scientific theories about political contestation and the production of violence. We also get knowledge about basic development questions like, 'If you want to improve the economy in a place where there's a lot of violence, how can you do it?'"

The project has three simultaneous tracks. First, the group is generating data and performing econometric analysis of data on development and insurgent violence in Iraq, Afghanistan, the Philippines and Vietnam.

Second, field research is being conducted in the form of surveys and interviews to test and enhance the data, which is incomplete in many cases. For instance, the group has very detailed data on acts of violence in Iraq, but inconsistent data on employment -- in some areas people said they were unemployed unless they were working for the government. The project includes fieldwork in Pakistan, Northern Ireland and the Philippines.

Third, the group is planning field experiments in partnership with the U.S. Agency for International Development and other aid agencies. These experiments are intended to precisely measure the impact of aid, complementing work on the other tracks.

Some of Shapiro, Berman and Felter's early work on employment and violence uncovers conclusions contrary to conventional wisdom. In a recent working paper on unemployment and insurgency in Iraq and the Philippines, they examined the theory that employed young men are less likely to participate in insurgent violence. Their analysis of the data showed that unemployment correlated to less violence.

"The implication for policy is that maybe we should rethink these make-work projects predicated on the idea that if you give people menial jobs they won't pick up a weapon and fight," Shapiro said.

Laitin, one of Shapiro's other collaborators, said he hopes their work will "contribute to a more realistic knowledge base" for public policy decisions.

"Many conventional beliefs about insurgency, terrorism and the policies to counter them are false at worst and untested at best," Laitin said.

Shapiro's original research interest on the organization of terrorist groups provides a historical basis for his understanding of terrorism and counterterrorism, and he spends his spare time reading biographies of terrorists to fuel a manuscript. He is writing a book based on his doctoral dissertation titled "The Terrorist's Challenge: Security, Efficiency, Control," which describes patterns in how terrorists have organized from 1878 to the present and how to deal with these organizations. The groups' hierarchy, financing, communication and recruitment tools follow similar patterns over the last century, he said.