The Global Leaders Fellowship provides support to early-career scholars from developing countries who spend one year each at the University of Oxford and Princeton pursuing research on international governance issues. Pooja Sharma, a scholar from India who is among the current cohort of fellows at Princeton, is studying the governance of international trade agreements. Other program fellows are exploring subjects such as climate change, poverty, energy security and pandemics, with the goal of bringing their knowledge back to universities, governments and organizations in their home countries.

A network of promising scholars from developing countries is taking shape through a program at Princeton and the University of Oxford inspired by two leading political scientists' desire to give developing nations a stronger voice in world affairs.

A few years ago, Robert Keohane of Princeton and Ngaire Woods of Oxford were discussing their belief that global governance seemed dominated by the United States and Europe with little input from developing countries. "With that in mind, we started to think about how we could do that, how we could rebalance and enrich the debate and bring rich perspectives and voice to it," Woods said.

Their solution was the Global Leaders Fellowship (GLF) program, which provides up to six fellowships annually to early-career scholars from developing countries. The fellows spend one year at Oxford and then one year at Princeton pursuing postdoctoral research on international governance issues with leading figures in the field. The program, launched in September 2008 and co-directed by Keohane and Woods, supports the fellows as they study issues such as climate change, poverty, energy security and pandemics, and then bring their knowledge back to universities, governments and organizations in their home countries.

"If you're a brilliant scholar from a developing country, what's going to help you sharpen your ideas is access to top universities and a network of other brilliant scholars from the developing world," said Woods, a professor of international political economy who is well known for her work on the International Monetary Fund and on negotiations between developing and wealthy countries.

Keohane, a professor of public and international affairs in the Wilson School and an eminent scholar of world politics and international institutions, said the fellows "have demonstrated that there is a pool of first-rate promising younger scholars from developing countries." 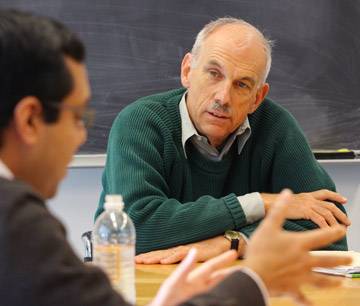 Program co-director Robert Keohane, a professor of public and international affairs in Princeton's Woodrow Wilson School of Public and International Affairs, said the fellows "have demonstrated that there is a pool of first-rate promising younger scholars from developing countries."

"If the GLF can play even a small role in improving governance, it will have a positive impact that justifies both the expense and the time spent engaging in it," he said.

Keohane said the Princeton-Oxford program has worked "like a dream." An executive committee of Princeton and Oxford faculty members selects the fellows from a pool of some 100 candidates. All of the fellows and the executive committee members gather each May for a colloquium that alternates between Princeton and Oxford. An advisory council composed of established scholar-practitioners from developing countries offers advice and support to fellows returning to their own countries to contribute to policymaking and scholarship.

Oxford and Princeton alumni provided much of the funding for the program, and it was the alumni who suggested one of its more unique features: After scholars leave, they are expected to return to the colloquium, with all expenses paid, for the next five years. The hope is that the group of scholars now working in the field around the world will form a "Global Leaders Network."

The 2009-10 cohort of fellows, now based at Princeton, includes Arunabha Ghosh, a native of India who earned his Ph.D. at Oxford and has worked as a policy specialist at the United Nations Development Program in New York and at the World Trade Organization in Geneva. He currently is working on issues of governance related to climate change, particularly in transferring cleaner technology from industrialized countries to developing countries. The GLF program "takes us beyond the boundaries of our projects to really add a much deeper engagement with the literature and hopefully create a common language," Ghosh said.

Ana Arroio, of Brazil who holds a Ph.D. from the University of Sussex, said she believes the program has given scholars "the international dimension of the linkage between industry, academia and government." Arroio's research explores how developing countries can make the best of new technology and new media.

George Gray Molina has a Ph.D. from Oxford and worked as the chief economist for the president of Bolivia during two administrations from 2002 to 2004. During that time, he discovered that "a lot of public policy challenges have to do with global challenges" and that his education had not prepared him for that reality.

Now Gray is focusing his research on how trade and labor policies can affect economic growth and inequality in Bolivia. While his research focuses on his home country, the GLF program has made him think globally, he said. For example, much of the grain grown in Bolivia is bought by Whole Foods, the U.S. grocery chain. "I think we're getting much closer to thinking of a multilevel governance, thinking of where global public policy fits into the equation, even in very small countries like Bolivia," he said.

Gray and other scholars are planning a spring seminar series titled "Global Governance Upturned," which begins Friday, Feb. 26, and will address consequences of global shifts in economic and political power. They are also thinking about writing and editing a publication on their research. Gray envisions bringing this research approach back with him to create a Bolivian institute of public policy, or "a tiny Woodrow Wilson School."

Pooja Sharma, who is from India, received her Ph.D. from the University of Cincinnati and previously worked with the Research and Information System for Developing Countries (RIS), which provides research and policy advice to the Indian government. She now researches the governance of international trade agreements, with the aim of finding ways to make global institutions more aligned with the needs of people in poorer countries. She is weighing whether to return to work with a think tank such as RIS or to go into government work.

A huge advantage of the GLF program, according to Sharma, is that it creates a network of scholars from regions of the world far from their home countries. "You get access to thinking in Latin America, Africa, Asia," she said.

Bo Qu, a native of China with a Ph.D. from Peking University, is researching how China interacts with the international monetary system, particularly the International Monetary Fund, and "the imbalances between China and the United States." His focus is on how to make international institutions more accountable. 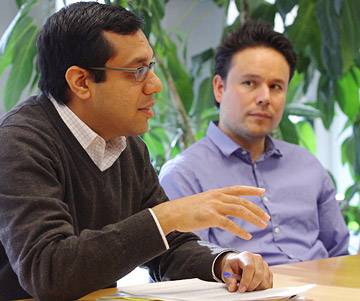 The GLF program fellows bring a range of experience to the program. Arunabha Ghosh (left), a native of India, has worked as a policy specialist at the United Nations Development Program in New York and at the World Trade Organization in Geneva. George Gray Molina worked as the chief economist for the president of Bolivia, his home country, during two administrations.

The 2010-11 cohort, now studying at Oxford, includes Le Thanh Forsberg, a Vietnamese scholar with a Ph.D. from Lund University in Sweden. The author of numerous publications on the politics of aid to developing countries in Asia, she currently is pursuing research on the effect of aid on public policy and the role of international donors in public health care governance.

Dima Noggo Sarbo, a native of Ethiopia with a Ph.D. from the University of Tennessee, worked in three ministries of the Ethiopian government and the United Nations Institute for Economic Development and Planning in Dakar, Senegal. He assisted refugees in Ethiopia, Sudan and Somalia in the 1980s, and was a cabinet minister in the Ethiopian government from 1991 to 1992. He plans to research ways to help the developing world, particularly Africa, to "participate effectively in the global political economy."

Rahmane Idrissa, who is from Niger and holds a Ph.D. from the University of Florida, has researched democratization in Africa. Ren Hongsheng, a native of China with a Ph.D. from Nankai University, is focusing his work on the relationship between developing countries and multinational corporations. Leany Barreiro Lemos, who holds a Ph.D. from the University of Brasilia and has been a staff member of the Brazilian Federal Senate since 1993, said the program offers her the opportunity to study "frailties in new democracies."

Woods, the GLF co-director, said these scholars and their projects have the potential to ultimately "shift the orthodoxy" and have an impact on the study of global governance.

"A lot of the existing literature is quite fatalistic," she said, noting that for small countries the message has been "you're always going to be a rule taker, you're never going to be a rule maker." But through the work of the GLF scholars, she said, "We can learn how smaller players or weaker players can really make use of opportunities."