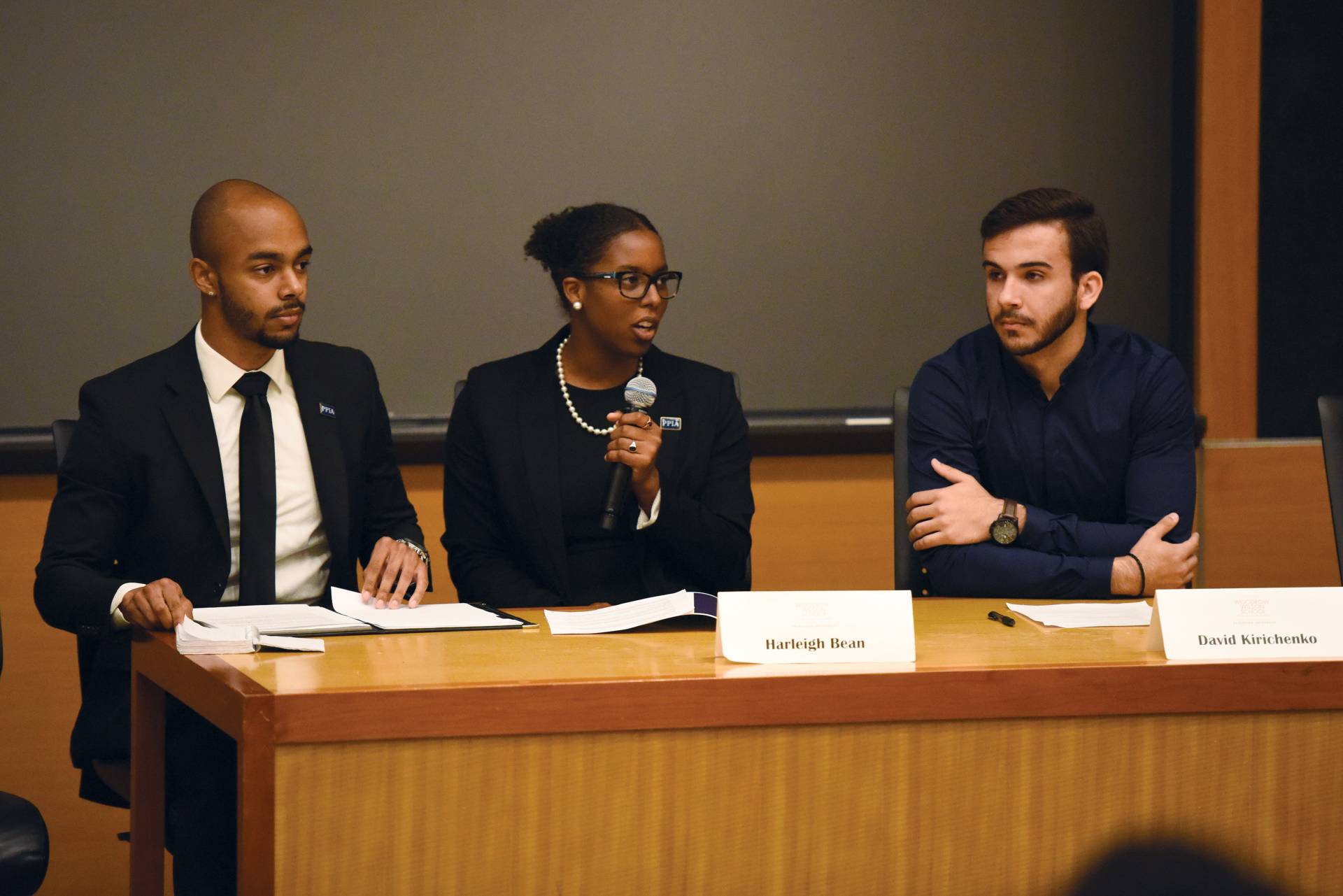 With this inspirational message, James Gadsden, a former U.S. ambassador to Iceland (2002-05) and former lecturer and diplomat-in-residence at Princeton University, concluded the international policy workshop he taught this summer to rising college seniors from around the country.

Aiming to prepare undergraduate students for graduate study and careers in public policy and international affairs, JSI comprises a rigorous curriculum focused on writing, critical thinking, public speaking and quantitative reasoning skills. It requires coursework in economics and statistics, as well as policy workshops in international and domestic policy issues.

This year’s diverse JSI cohort consists of 34 students, representing 31 colleges and universities in the United States and 26 majors. The students hail from 13 states as well as China, Nigeria and Singapore. Each student arrived at Princeton with a unique academic background and a desire to cultivate and refine their skills and interests in public policy.

Esteem Brumfield, a junior majoring in rhetoric and political science at the University of California-Berkeley, said he initially felt intimidated by the idea of coming to JSI at Princeton, especially because of what he describes as a “minimal background in math.” Brumfield’s parents did not enroll him in high school, so he obtained his GED at the age of 23. He credits JSI Director Laura de Olden with encouraging him to focus on the process of learning, rather than successes or failures.

“My whole life, math felt like a hurdle, but in seven weeks at JSI, I’ve come to see math as an on-ramp to someplace exciting,” he said. “I never imagined statistics would be relevant to my field of interest, but the instructors revealed the importance of data analysis in relation to our criminal justice system.”

“I’m interested in better understanding how certain health conditions increase an individual’s likelihood of arrest — particularly focusing on how mental health conditions may contribute towards incarceration,” he said.

The skills Brumfield and his peers obtained throughout JSI took center stage during the program’s policy workshops, taught by Gadsden, a former midcareer fellow at the Wilson School who led the international workshop, “Facing Global Security Threats: A Framework for U.S.-EU Strategy,” and Daniel Meuse, who led the domestic policy workshop, “The Social Determinants of Health: Improving Health Outcomes in Rhode Island.” Meuse also serves as deputy director of the State Health Reform Assistance Network housed within the Wilson School’s Center for Health and Wellbeing. 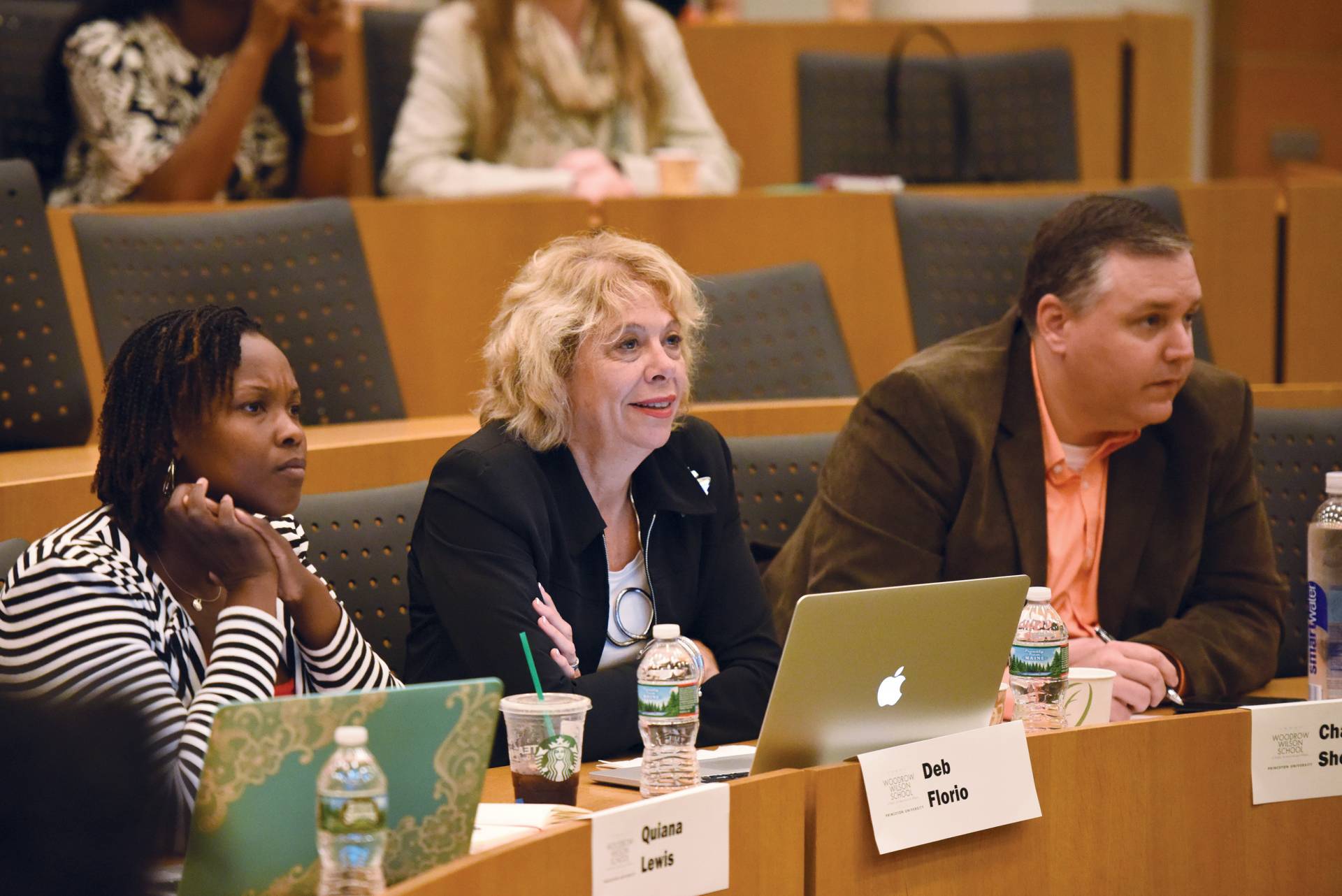 Student groups investigating issues in Latin America, Asia, Africa and the Middle East presented to a panel including Ambassador Lino Gutierrez, who served as U.S. ambassador to Argentina from September 2003 through July 2006; Cynthia Watson, professor of security at the National War College; and Joel Danies, foreign service officer at the U.S. Department of State.

Student groups in the domestic workshop each focused on one component (e.g., economic and educational factors) of a complex issue: how to improve health outcomes among Rhode Island’s Medicaid recipients. They presented to a panel including Chad Shearer, vice president for policy and director of the Medicaid Institute, United Hospital Fund of New York; Quiana Lewis, program associate, Robert Wood Johnson Foundation; and Deb Florio, deputy Medicaid director and CHIP director for the state of Rhode Island.

A 15-minute Q&A session after each presentation served as a real-world learning exercise where challenging questions and critiques were posed to the students, who had to answer on the spot. For example, on the issue of decreasing Colombia’s production and trafficking of cocaine, Danies asked the Latin American working group: “Why would we not just tighten the U.S. borders to decrease drug trafficking, and move on to addressing other issues? Is partnering with Colombia worth our time?”

Jennifer Beltrán, a junior at Swarthmore College majoring in economics and Spanish, responded: “We believe that it is more effective to address the root causes than to tighten the U.S. borders. Say we do tighten our borders; there will still be drugs being trafficked to Mexico. If you’re sick with a bug, taking medicine is the surface cure, but if you really want to get at the root cause and truly prevent illness, you’re going to make sure your hands are clean, and you stay away from sick people. The root causes of Colombia’s existing violence are the drug trade and the rebel group activity. If you’re a rural Colombian farmer, you’re probably going to grow cocaine rather than earn a very meager wage to support your family.”

The panelists acknowledged the students’ in-depth research and provided valuable advice for them to carry into their careers.

As a member of the domestic policy workshop, Olivia Lucas, a junior from Mount Holyoke College majoring in international relations, said she learned how to understand and analyze how social factors such as race, economic status, education level, incarceration and housing instability affect health and access to services.

“My internship experiences in congressional offices combined with my coursework in the JSI domestic policy workshop have inspired me to pursue positions on Capitol Hill and in political advocacy groups,” she said. “As I begin my career, I plan to leverage the skills I gained this summer to influence the creation and implementation of policies that promote social and economic justice.”

On a personal level, Lucas values the new friendships and relationships that JSI allowed her to forge with other young people and professionals in the public policy field.

As the new JSI director at the Wilson School, de Olden concluded the final workshop presentations by commending the students and panelists for their efforts.

“It is not easy to put together a report like the one you put together, especially under the time constraints and the very intense summer of economics and statistics,” she said. “We are grateful to our panelists for sharing their knowledge and encouraging you to frame your proposals in ways that are politically feasible, which is key to the policymaking process.”