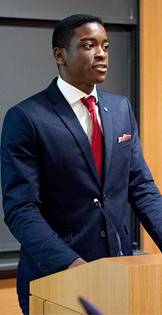 During the Junior Summer Institute, a seven-week program hosted by the Woodrow Wilson School of Public and International Affairs at Princeton University, 35 rising college seniors from across the country and around the world immersed themselves in the world of policymaking with a curriculum designed to prepare participants for advanced degrees and careers in public and international affairs. Shama Ams (above) of St. John's University gives the opening remarks for a group presentation on the Mali conflict.

On a recent summer morning, the atmosphere in the auditorium at Princeton University held all the gravity, anticipation and formality of a United Nations session or global summit: Briefcases sat upright on the carpeted floor. Pairs of bound reports and water bottles, like table settings, ran the length of the polished wood tables in front of the tiered seating. Microphones stood at attention across the dais below. One could easily imagine a camera from C-SPAN swinging into view. 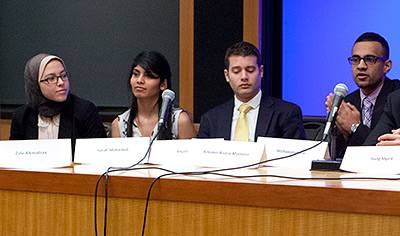 Promptly at 10 a.m., a former ambassador, an expert in European Union law and a member of the State Department took their seats in the front row. The 35 young men and women who then filed in, many in tailored dark business suits, were not dignitaries or diplomats — not yet, anyway — but rising college seniors from across the United States and around the world.

They were about to deliver their final assignment in the Junior Summer Institute (JSI), a seven-week program hosted by the Woodrow Wilson School of Public and International Affairs designed to prepare participants for advanced degrees and careers in public and international affairs. The students' job that morning was to present a 56-page report, "Capacity Building: The Role of the US-EU Partnership in Supporting Good Governance," which they had written collaboratively about the Mali conflict, post-NATO Afghanistan and the Latin American drug trade.

Shama Ams of St. John's University opened with an eloquent, concise summary of the political, military and economic situation in the fractured Mali state, where the United States works with the European Union to address myriad issues following the 2012 coup d'etat and subsequent French intervention.

The group had just 15 minutes to present their recommendations, which included strengthening the Trans-Sahara Counterterrorism Partnership, collaborating with the EU to establish the Northern Reconciliation Council, and establishing a $140 million aid package to promote stability, undermine the influence of Islamic extremists in the region, and ensure access to humanitarian aid.

During the question-and-answer session that followed, panelist Lisa Bucher, a political analyst in the Office of Analysis for Russia and Eurasia, Bureau of Intelligence and Research, in the U.S. Department of State, complimented the group's "very professional" presentation. "And now I'm going to give you a hard time — because I know you can take it," she said before asking incisive questions about France's stakes in the region.

Another panelist was Lino Gutierrez, director of the Una Chapman Cox Foundation and a member of the Senior Foreign Service who has served as ambassador to both Argentina and Nicaragua. He also expressed high praise for the group, then pointed out they should "look at the big picture — U.S. policy toward Africa, the Congressional climate in Washington, and the art of the possible in this budget plan."

A panel of three policy professionals — Lino Gutierrez (left), a member of the Senior Foreign Service and a former ambassador to both Argentina and Nicaragua; Lisa Bucher, a political analyst in the Office of Analysis for Russia and Eurasia in the U.S. Department of State; and George Bustin, a 1970 Princeton graduate, visiting lecturer at the Wilson School and an expert in European Union law — challenge the students during the Q&A session.

Ams said that he was amazed by how positive the panelists' feedback was and how challenging their questions were. "Their insights encouraged us to think through problems from beginning to end when addressing a policy question," he said.

Touches of levity maneuvered their way into the serious proceedings. Bucher lauded the Afghanistan study group on "how well you grasp this kind of work we do in government and in diplomacy — I can imagine reading this report in my office at work, something prepared by my colleagues. The problem is, my colleagues haven't done that well over the past few years in Afghanistan." The audience erupted in laughter.

When Bucher asked whether the group could demonstrate how their recommendations differed from what her own colleagues had already tried, Mohammad Usman Zia of the University of Maryland got his own round of laughter — and applause — when he answered with a firm, unequivocal "Yes."

The panelists' advice ranged from practical to thought-provoking. 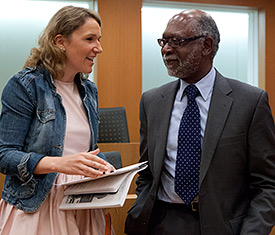 Marina Henke (left), a Wilson School postdoctoral research associate, and James Gadsden, a former diplomat-in-residence at the Wilson School and a former ambassador to Iceland, led the international policy workshop and were among several Princeton faculty members and experts who taught classes during the program.

George Bustin, a 1970 Princeton graduate, visiting lecturer at the Wilson School and senior counsel with Cleary Gottlieb, Steen & Hamilton, reminded the students to cite their sources when making assertions. Referring to the report, Bustin, who has published widely on European Union law said, "Some of the statements are not self-explanatory, and it distracts the reader."

Bucher pulled no punches. "It seemed to me that in mixed panels of men and women, the men tended to be first to answer the questions. It startled me." She challenged the women in the room to ask themselves: "Are you hanging back for some reason because you don't want to seem too aggressive or assertive? I think we as women are concerned about how we'll come across but knowing the women in this room, you'll only come across as smart."

Sarah Mohamed of the University of California-Berkeley, one of four female students on the Afghanistan panel (with four male students), said while Bucher made an excellent point, her own experience has been more positive.

"Young women of my generation are not afraid to speak their minds or fight for their beliefs," Mohamed said. "I think that the female JSI participants with whom I worked all summer are powerhouses. Not once did I feel like one of us hesitated to speak her mind. But [Bucher's comment] is definitely an important red flag."

Melissa Lyles, director of JSI and the graduate program office director at the Wilson School, commended the students "for producing quality reports and their ability to maintain their composure when responding to tough questions from a panel of well-experienced professionals. The students knew very little about the topics prior to the start of the program. What's more, the completion of the final presentations and reports were in addition to taking very rigorous courses." 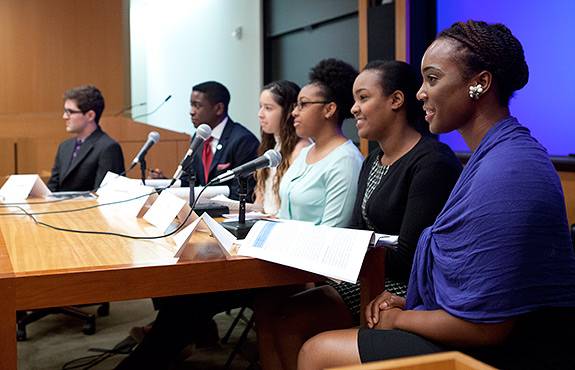 Students address questions from the panelists following their presentation. Students are selected for the institute based on their demonstrated commitment to public service and commitment to cross-cultural and social issues.

The curriculum included classes in statistics, microeconomics, international and domestic policy, and policy writing and analysis. The group also traveled to Washington, D.C., and attended a talk on graduate school admissions and resume-building.

Ams said access to Princeton's faculty was the most important factor in his choice of JSI. "We met ambassadors, leaders of industry and other very down-to-earth men and women of influence." He called the international policy workshop, led by James Gadsden, a former diplomat-in-residence at the Wilson School and a former ambassador to Iceland, and Marina Henke, a Wilson School postdoctoral research associate, "an outstanding experience."

The program included a weekly lunch series with faculty members of the Wilson School, practitioners and Princeton alumni. Ams, whose policy interests include the delivery of medical supplies in West Africa, said he learned from Adel Mahmoud, a lecturer with the rank of professor in molecular biology and public policy, "how misinformation can drastically affect public health outcomes."

At a lunch with Jennifer Widner, a professor of politics and international affairs, Ams learned "how simple solutions can mitigate resource spoilage and corruption." Widner used the example of how one port in Liberia used a security camera to prevent hijacking of cargo, a solution with minimal expenditure, labor or maintenance cost. "These key insights not only shed light on how precarious policymaking can often be, but also how promising common-sense solutions are when they are applied," Ams said.

Students listen to their peers in a setting designed to replicate a formal policy meeting or diplomatic summit.

Zia, who is interested in entrepreneurship and economic development in the Greater Middle East and sub-Saharan Africa, said he particularly enjoyed the lunch with Barbara Bodine. A lecturer in public and international affairs, she spoke about her experiences as a former U.S. ambassador to Yemen.

"As a first-generation American of Pakistani and Afghani descent, I often find it challenging to explain the context of political and economic issues in the Islamic world," Zia said. "The perspectives of the local populations in the greater Middle East are often difficult to contextualize for Western audiences but Ambassador Bodine was able to concisely draw attention to the roots of policy problems."

Mohamed had a different takeaway. "Sitting with Ambassador Bodine made me feel more empowered than I have in a very long time. She addressed the issue of women working in diplomacy in such a way that I came out feeling that I could do anything I set my mind to," Mohamed said.

The Princeton summer institute is part of the Public Policy and International Affairs Fellowship Program, a national consortium of top public policy and international affairs (PPIA) graduate schools that prepare college juniors for advanced degrees and careers in public service. In addition to Princeton, the University of California-Berkeley, Carnegie Mellon University and the University of Michigan host PPIA summer institutes.

All 35 students are chosen for the Princeton institute based on a demonstrated commitment to public service, and an interest in and commitment to cross-cultural and social issues. Each student enrolled in the program is fully funded and receives financial support for all program expenses. The Princeton and Carnegie Mellon programs are the only institutes open to international students, which participants say helps broaden their perspectives.

At the close of the presentations, Gutierrez remarked that the students exceeded his expectations. He then paused a moment before saying with a smile: "You're young, you can't help it." Quickly realizing that not everyone in the room — namely, the students — had gotten the reference, he explained it came from a line in an old song, "Father and Son," by Cat Stevens: "You're still young, that's not your fault."

"You're idealistic, which is great," Gutierrez said. "You haven't been beaten down and become a cynical bureaucrat — I hope you don't but many do. It's good that you're thinking outside the box, and you're trying new things. I commend you for that. I can see a lot of you as diplomats or working in foreign policy."