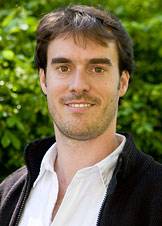 Research by Thomas Gregor, an assistant professor of physics at Princeton, and others is shedding light on the molecular basis of collective behavior, seen throughout nature from geese to fish to amoebae. The researchers have found strong evidence pointing to the fact that collective behavior can arise in cells that initially may not be moving at all, but are prodded into action by an external agent such as a chemical. (Photo: Brian Wilson)

Scientists have long wondered what is happening at the cellular and molecular level to bring about this amazing coordination of so many individual animals, insects and organisms into groups. It's a choreography seen throughout nature from the large-scale to the miniscule, with synchronized movements as precise as the dance lineup of a Broadway musical.

Is there a secret drum major, a leader among the group setting the pace and instigating participation? Or is it that organisms and cells already are moving rhythmically but independently and then find themselves provoked into harmony by an external beat?

A group of scientists seeking the answer to the mystery of collective motion has found strong evidence pointing to a third possibility -- collective behavior can arise in cells that initially may not be moving at all, but are prodded into action by an external agent such as a chemical. Research led by Thomas Gregor, an assistant professor of physics at Princeton, and Satoshi Sawai, a former postdoctoral fellow in the laboratory of Princeton biologist Edward Cox and now at the University of Tokyo, has shown that food-deprived amoebae are prodded into their coordinated clumping by the chemical cyclic adenosine monophosphate (cAMP), effectively changing the parameters of the cell environment.

The chemical is ubiquitous in nature, aiding signaling within living cells and regulating activities like protein production. John Bonner, Princeton's George M. Moffett Professor Emeritus of Biology, put the substance on the map for amoebae in 1967. He showed with his collaborators that certain cells are drawn to cAMP, and provided through a series of experiments one of the clearest demonstrations of chemotaxis -- the movement by a cell or organism toward a chemical stimulus -- ever shown.

Gregor said his team's recent findings could have implications for collective behavior beyond amoebae, such as processes in humans ranging from white blood cells that swarm in the lymph nodes to the step-by-step development of cells into organs.

Writing in a paper to appear in the May 21 issue of Science, the researchers were able to measure concentrations of the chemical and mark its effects for the first time as it arose in single living cells and clusters of cells in Dictyostelium, a slime mold. When the amount of the chemical surrounding an individual cell reaches a certain critical level, the scientists found, the cell starts to pulse rhythmically, firing off more chemicals into the surrounding area that prompt other cells to pulse, an effect that cascades through the population. Ultimately, the cells grow in sync with each other and eventually move together as a massive group. 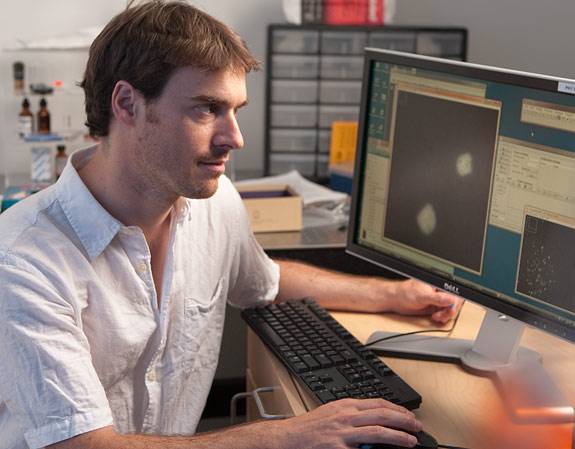 The work led by Gregor and Satoshi Sawai, a former postdoctoral fellow in the laboratory of Princeton biologist Edward Cox and now at the University of Tokyo, has revealed that food-deprived amoebae -- shown on the computer screen -- are prodded into their coordinated clumping by the chemical cyclic adenosine monophosphate (cAMP), effectively changing the parameters of the cell environment. (Photo: Brian Wilson)

"This is the first time in biology that such a mechanism could be shown both at the single cell and at the cell population level simultaneously," said Gregor, the first author on the paper. Gregor, who also is a member of Princeton's Lewis-Sigler Institute for Integrative Genomics, joined the University faculty in February 2009 after working with Sawai at the University of Tokyo.

Cox, the Edwin Grant Conklin Professor of Biology at Princeton and a pioneer in the study of cell signaling, said, "To my way of thinking, this is one of the major advances in the field in the past many years."

Learning whether a signal exists to provoke collective motion, he said, is similar to knowing what signals are conveyed to cells so that they become specialized units such as hearts and kidneys. The current work by Gregor, Sawai and others on the paper can lead to better understanding of what drives groups of cells to perform specific behaviors, Cox said.

While instances of collective motion can be seen throughout nature, Gregor favors studying the social amoebae Dictyostelium. The group behavior exhibited by these creatures has long fascinated scientists. As individual cells of Dictyostelium divide in two, their population doubles in a few hours. Once they have consumed all of their favorite food -- all the bacteria in the vicinity -- they will begin to gather at a central collection point. So many come together that the clumped cells become visible to the naked eye. This accumulation serves as an alternative survival strategy for the starving cells: Many of the cells end up turning into spore cells that will endure the starvation period. 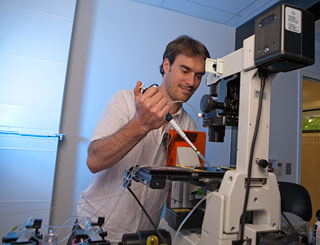 A biophysicist, Gregor wants to discover the basic physical principles that govern the existence of multicellular life. In attempting to explore these issues, he has built state-of-the-art microscopes and microfluidics devices, which detect and measure microscopic levels of chemicals within cells. (Photo: Brian Wilson)

In the experiments, the team used an optical sensor to detect the levels of cAMP in individual amoeba cells. The sensor is able to change color between bright blue and yellow for high and low cAMP concentrations, respectively. Using this sensor in combination with high-powered microscopes, populations of cells can be individually tracked and their internal cAMP concentrations can be monitored simultaneously. This system allowed the researchers to see for the first time in real time the onset of the collective behaviors that lead the cell population to aggregate, and to link these behaviors directly to the molecular level of the cell's signaling mechanisms.

A biophysicist, Gregor wants to discover the basic physical principles that govern the existence of multicellular life. This can include anything, he said, from the collective behavior of soil-dwelling amoebae to the development of the human embryo after the moment of conception. He believes that experiments that can directly study these complex life processes should become an integral part of any modern physics curriculum.

In attempting to explore these issues, he has built state-of-the-art microscopes and microfluidics devices, which detect and measure microscopic levels of chemicals within cells, both in cellular colonies and in embryos. His work is also steeped in the theoretical, allowing him to design analytical and numerical models to test and guide his experiments.

Many studies, he said, focus on either the behavior of single cells or on the global properties of   populations, rather than focusing on interactions. "It is increasingly clear that cells within organisms behave collectively," Gregor said. "It is therefore no longer enough to understand how single cells behave. Instead, we must identify their collective interactions and their signaling mechanisms at a systems level."

On the one hand, scientists need to understand how cooperative properties exhibited by groups differ from single-cell characteristics, he explained. On the other hand, researchers also need to know how actions within single cells generate communal behavior.

"To address this problem, there is a critical need to simultaneously observe the behaviors of individual cells, the behavior of the population as a whole, and to measure the relevant signaling interactions," Gregor said.

Gregor's research addresses longstanding questions about what is happening at the cellular and molecular level to bring about the coordination of animals, insects and organisms into groups.

Researchers use electric fields to herd cells like flocks of sheep