John Bonner retired from teaching in 1990 but still conducts experiments daily from his lab on the top floor of Guyot Hall. At age 89, the George M. Moffett Professor Emeritus of Biology is one of the world's leading experts on cellular slime molds. After almost 70 years of studying these organisms, he said, "You could never be bored by them."

Where others see jumbled clumps, he sees highly sophisticated organization.

At age 89, Bonner, the George M. Moffett Professor Emeritus of Biology, is one of the world's leading experts on cellular slime molds, found in soils the world over. He has led the way in making "Dictyostelium discoideum" a model organism central to examining some of the major questions in experimental biology. Science magazine describes him as "the current patriarch of the slime mold community."

He has made them the subject of his latest book -- his 18th -- called "The Social Amoebae: The Biology of Cellular Slime Molds." Published by Princeton University Press, it gives a detailed history of his "beloved slime molds," showing where they fit into biology and how they may illuminate that vast subject. He intends it as "an essay on the big things we have learned."

What is it about this slimy, ground-dwelling critter that has captivated Bonner for nearly 70 years?

Slime molds are "no more than a bag of amoebae encased in a thin slime sheath," Bonner said. "Yet they manage to have various behaviors that are equal to those of animals who possess muscles and nerves with ganglia -- that is, simple brains."

But they are not animals, or fungi, bacteria or plants. They belong to the fifth kingdom of life, the one least understood by scientists, known as Protists.

Bonner likes to point out that slime molds possess a fascinating repertoire of behaviors. They can be chopped in two and reconstitute two versions of themselves. They exhibit a form of intelligence: When separated, they will put themselves back together and start to move. They avoid dead ends and are oriented by gases, such as oxygen.

Their life cycle intrigues researchers for the questions it raises about altruism. As the individual cells of Dictyostelium divide in two, their population doubles in a few hours. Once they have consumed all of their favorite food -- all the bacteria in the vicinity -- they will begin to gather at a central collection point. So many come together that the clumped cells become visible to the naked eye.

From there, the cells dance a ballet. A 1984 BBC documentary, "Professor Bonner and the Slime Molds," took advantage of this natural choreography. The cells' motions are sped up on film and set to classical music. As they gather, they lengthen and attach to another, like a great conga line. A nipple forms on the clump, causing the mass to stretch out into a slug which then slowly inches along the Petri dish. A half day later, the slug, made up of hundreds of thousands of cells, will form what Bonner describes as a "fruiting body," a dead stalk with a ball of live spores on the top. Out of the lab and in the natural world, the spores will poke thorough soil and be carried away to new pastures by crawling insects and worms.

The main value of the self-sacrifice by the stalk cells, scientists believe, is to maximize the spread of the organism. Sticking up into the air, it turns out, makes spore dispersal more effective. How is it that some cells are willing to be part of the stalk and die, so that some others may live on as spores? As Bonner has pointed out, this occurs because all of the cells are closely related genetically, and the lost genes of the stalk cells are carried on to the next generation by the spores. Experiments have shown that mixtures of species will separate and sort themselves out. It is as if they know their own kind.

Between their seeming altruism and their other complex behavior, the slime molds raise compelling questions for scientists to ponder. After all this time, Bonner believes he has yet to get to the bottom of it all.

According to Bonner, slime molds possess a fascinating repertoire of behaviors: They can be chopped in two and reconstitute two versions of themselves. When separated, they will put themselves back together and start to move. They avoid dead ends and are oriented by gases, such as oxygen. And in their life cycle, some cells die so that others may live.

Among his peers, Bonner is admired for his deep focus.

"What I think is most responsible for his long success is that he is tenacious in ferreting out something that he has yet to understand," said Professor of Ecology and Evolutionary Biology Henry Horn, a longtime colleague. "It also helps that he is obsessed with the question of how any given feature of an organism might be adaptive to its habitat and lifestyle. This kind of question cannot be answered simply by describing what you see, but rather requires a functional interpretation, which in turn can engender a novel experiment."

Bonner is well known for his discovery in 1947 (as part of his doctoral thesis) that cells can be drawn to a chemical substance that acts like a magnet for certain organisms. He and his collaborators found that slime molds are inexorably attracted to a chemical called cyclic adenosine monophosphate. The substance, ubiquitous in nature, aids communications between hormones and cells. The discovery remains one of the clearest demonstrations of chemotaxis -- which is the movement by a cell or organism toward a chemical stimulus -- ever shown. 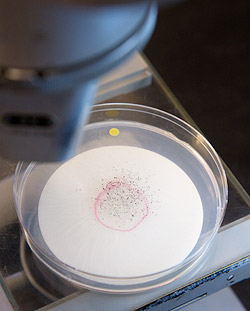 Bonner said, "My idea of happiness in the laboratory is to do experiments that somehow combine the utmost simplicity of design with the maximum significance of result."

"John has been a pioneer and an instigator for using cellular slime molds as 'model' organisms for development, particularly of differentiation, and even for the evolution of altruistic behavior, since the presumptive stalk cells sacrifice themselves for the reproductive benefit of their clonal brethren, the presumptive spore cells," according to Horn, who describes his colleague as patient with everything "except intellectual sloppiness."

Bonner grew up on Long Island, spending time in the woods, the ponds and the marshes. "It was there that I first became fascinated with the out-of-doors, a fascination that later led me to biology," he wrote in his 2002 autobiography, "Lives of a Biologist."

When he became consumed with birds, his father, worried that ornithology might be too narrow an occupation, gave him "The Science of Life" by H.G. Wells to broaden his interests. It worked.

Bonner earned his undergraduate degree in biology from Harvard University and continued there, earning his master's degree in 1942. He went on to serve in the U.S. Air Corps during World War II and returned to Harvard where he earned his Ph.D. in 1947. He came to Princeton in 1947 as an assistant professor and has remained on the faculty since. He served as the chair of the Department of Biology from 1965 to 1977, from 1983 to 1984 and from 1987 to 1988.

He began working on slime molds in 1940 as an undergraduate. Through his studies, Bonner developed two great interests. He was intrigued by fungi and other lower plant forms due to a charismatic professor, William Weston. At the same time, he took a course in animal embryology, which whetted his appetite for that discipline. 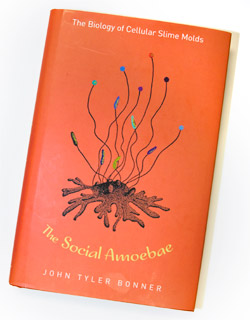 Bonner's latest book gives a detailed history of his "beloved slime molds," showing where they fit into biology and how they may illuminate that vast subject.

"I wanted to become two people," he writes in his latest book. "Then one day it dawned on me: Why not work on the embryology (or developmental biology as it became to be known later) of lower plants!"

He came across what is now generally known as "Dictyostelium" or "the social amoebae" while researching the Ph.D. thesis of Kenneth Raper, a student of Weston's. Bonner settled upon the organism as ideal for experiments in that it offered up a non-animal embryo for study. Over time, he has fleshed out its evolution, ecology, behavior and development.

There is a minimalism to his method. "My idea of happiness in the laboratory is to do experiments that somehow combine the utmost simplicity of design with the maximum significance of result," he said.

He retired from teaching in 1990 but still conducts experiments daily from his lab on the top floor of Guyot Hall. "This is what I do," he said recently to a visitor, while spying a Petri dish through a microscope. "I stare at slime molds -- and they're beautiful." He also writes daily in the Guyot office he has occupied for decades, resplendent with warm wooden accents, including floor-to-ceiling bookcases he built and sturdy oak tables.

This book is Bonner's third work on slime molds but not his last. He is hard at work on another. "You could never be bored by them," he said.