John Bonner, the George M. Moffett Professor of Biology, Emeritus, whose influential work with cellular slime molds shed light on the mechanisms of microbial life and illuminated the behavior of cells in all life forms, died in Portland, Oregon, on Thursday, Feb. 7. He was 98.

A three-time chair of the Department of Biology, Bonner served on the Princeton faculty for 42 years and remained active teaching and researching for more than two decades after transferring to emeritus status in 1990. 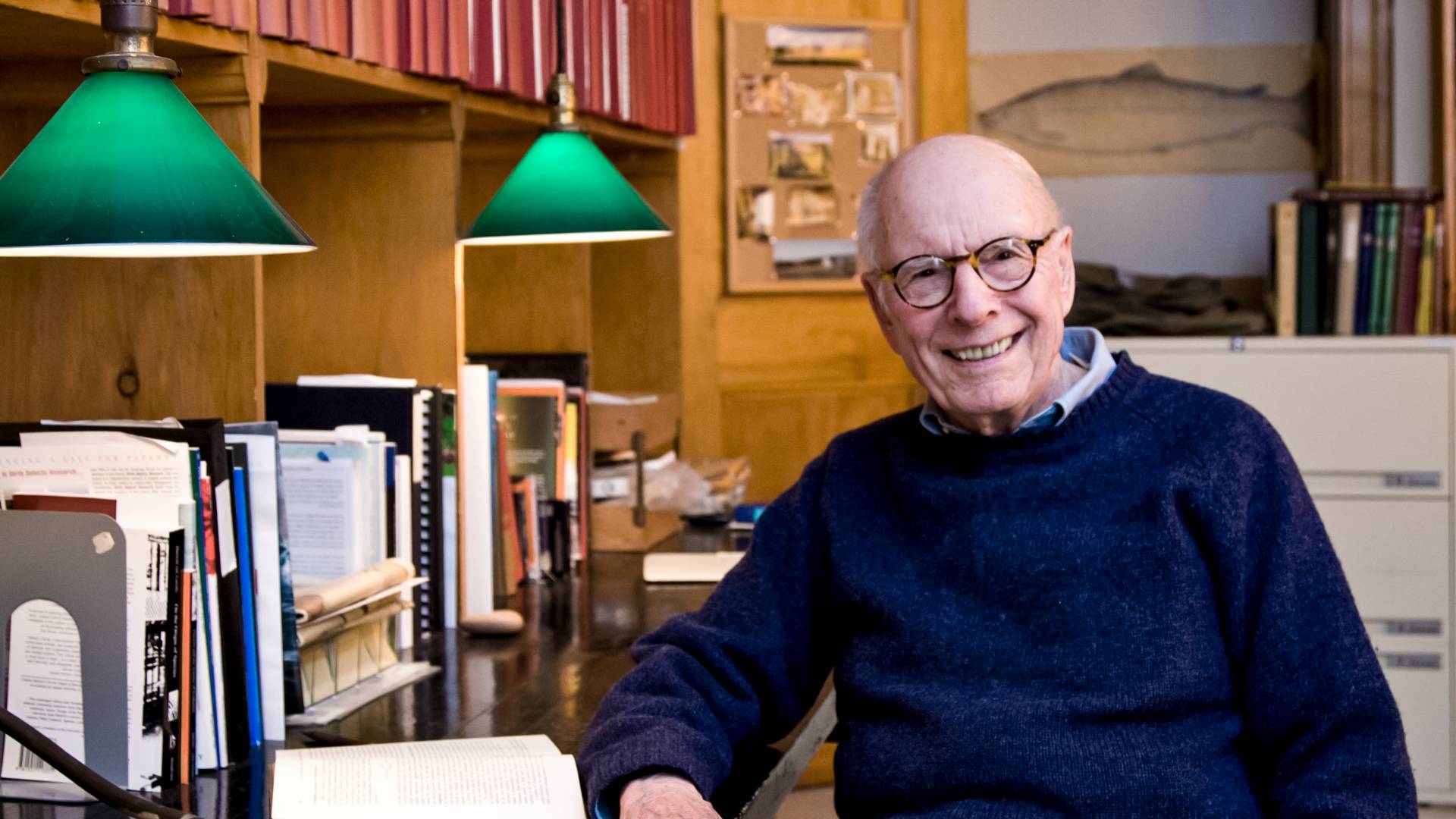 Primary among Bonner’s accomplishments were his discoveries about the behavior of slime molds, which are found in soils throughout the world. He led the way in making Dictyostelium discoideuma a model organism central to examining some of the major questions in experimental biology.

“John was a world-leading scientist in the field of organismal evolution and development,” said Lars Hedin, the George M. Moffett Professor of Biology at Princeton, professor of ecology and evolutionary biology and the Princeton Environmental Institute, and chair of the Department of Ecology and Evolutionary Biology. “His studies of the curious cellular organization and ecology of slime molds are classic contributions to science, and led the way forward in the field of organismal cooperation and evolution.”

After more than seven decades of study, Bonner was endlessly fascinated by the behavior of slime molds, saying in a 2010 interview, “You could never be bored by them.” See a video of slime mold from Bonner’s research.

Colleagues said much of Bonner’s work was ahead of its time — exploring the evolution of culture in lower animals before it was fashionable — and that it continues to inform their own research and writing.

“When we last met, I shared some of my lab’s most recent work on slime molds and he incisively interrogated every data point, every trend, every inference,” said Corina Tarnita, associate professor of ecology and evolutionary biology. “In true John Bonner style, he then summarized our key results in two crisp sentences that suggested an interpretation we hadn’t considered. Towards the end of our chat he shared that what he’d love most would be to be a young postdoc again, return to Princeton, and continue tinkering with his beloved slime molds. He was 97 years old at the time.”

Iain Couzin, director of the Max Planck Institute for Orinthology and a former Princeton faculty member, recalled Bonner climbing the stairs to his office on the top floor of Guyot Hall almost daily to make new discoveries until he moved to Portland, Oregon, in 2012 to live with his children.

“He was in his lab still studying these animals and writing — he was writing all the time,” Couzin said. “And they were these big ideas. Even though he was working with these small organisms, his ideas were massive. He was interested in these things like size and scaling. It was absolutely wonderful to have known him in this time.”

Bonner delivered his last lecture, “Introductory Biology,” in 2009. According to his son, Andrew, Bonner recently had an article accepted to the Journal of Experimental Zoology — the same journal that published his first academic piece.

A native of New York City, Bonner was born on May 12, 1920. His father was the novelist Paul Hyde Bonner, whose papers are at Princeton.

John Bonner attended Phillips Exeter Academy and earned a B.A. in biology in 1941 and an M.A. in 1942 from Harvard University.

His studies were interrupted by four years of service with the Army Air Forces, though he still spent considerable time in the lab. Assigned to the Research Laboratory at Wright Field in Ohio, he worked on projects ranging from a study of flotation factors in the design of life vests to equipment deterioration in the tropics. Bonner also served as chief of the Biological Specialties Unit of the Aero Medical Laboratory at Wright Field.

In 1947, Bonner completed his Ph.D. at Harvard basing his doctoral thesis on his pioneering studies of the life cycles of amoebae.

Following a summer at the Marine Biological Laboratory in Woods Hole, Massachusetts, he joined the Princeton faculty in 1947 as an assistant professor and was named Moffett Professor in 1966.

According to his family, beginning in 1959 and almost to the end of his life, he spent summers at his home in Margaree Harbour, Nova Scotia, where he wrote many of his books and enjoyed fishing and nature walks. His book “Fifty Summers in Cape Breton” (2011) recalls his decades there and the changes he witnessed on the island.

In 2011, he donated his papers, videos and first stained slides of slime molds to the American Philosophical Society.

Henry Horn, professor of ecology and evolutionary biology, emeritus, whom Bonner hired as an assistant professor in 1966, said Bonner was an exceptional scholar and generous colleague.

“At that time the University was forbiddingly hierarchical, but John treated me as a full colleague from the start,” Horn said. “Even as the chair, with an international reputation for front-line research, he set an example for the rest of the biology faculty by teaching the same number of courses, and sponsoring the same number of undergraduates in their independent work, as he expected us to do. And his teaching and mentoring always balanced insight and rigor with charity and a loving sense of humor.”

Horn added: “Very early on he shifted from formal mentor Dr. Bonner to treasured friend John, and I discovered that that same transition happened for many of his students, postdocs and colleagues. His office door was open most of the time, and there was always a seat on the couch for anyone in need, and a filled teapot ready for the flame from an archaic gas burner.”

Peter Grant, the Class of 1877 Professor of Zoology, Emeritus, and professor of ecology and evolutionary biology, emeritus, called Bonner “a friendly, witty and courteous biologist, beloved by students who took his ‘Introductory Biology’ course.

“He was very popular because he was not only a clear communicator, but a great storyteller with a superb sense of timing and phrasing of the punch line,” Grant said. “For years we had regular sandwich lunches in my office. We discussed science, of course, but he also loved to tell us about his experiences with early faculty colleagues and many biologist friends in Britain. He had countless stories, and they were usually hilarious.”

Butch Brodie, the B.F.D. Runk Professor in Botany at the University of Virginia, director of Mountain Lake Biological Station and an undergraduate student of Bonner’s at Princeton, said he dreaded the idea of having to take biology from someone who seemed to be a reductionist, when he himself was interested in the behavior of “big charismatic beasts.”

“Bonner blew me away by introducing slime molds and a diversity of organisms doing things I had no inkling existed, and did so in a remarkably understated but enthusiastic way,” said Brodie, who still uses Bonner’s original videos of slime molds in his own lectures. “He always seemed to have time for naive questions from students and never let us know we were naive. What really stuck with me, though I didn’t realize it at the time, was his integrative approach to understanding a problem from its cellular mechanisms to its evolutionary significance. I can’t say that I modeled my own integrative approach to biology after his, but I didn’t know it was possible before his class.”

A prolific writer, with more than 160 journal articles to his name, Bonner also was an editorial board member for Growth, the American Naturalist, the Journal of General Physiology, Differentiation and Oxford Surveys in Evolutionary Biology. He was an editorial board member and trustee of Princeton University Press, a trustee and editor of Biological Abstracts and an associate editor for American Scientist.

Bonner served as Bernard Visiting Professor at Williams College, Raman Professor at the Indian Academy of Sciences and also was a visiting professor at Brooklyn College, the Jawaharlal Nehru Centre for Advanced Scientific Research and the Indian Institute of Science.

View or share comments on a blog intended to honor Bonner’s life and legacy.