Henry Horn, professor of ecology and evolutionary biology, emeritus, a scholar and fervent naturalist for whom Princeton’s campus and the surrounding areas provided a rich biosphere for study, died suddenly March 14 at Princeton. He was 77.

Horn joined the Princeton faculty in 1966 amid a wave of interest in evolution and ecology in the then-Department of Biology.

In 1991, he led the University into a new era of interdisciplinary environmental research as founding director of the Program in Environmental Studies. He transferred to emeritus status in 2011.

“Henry Horn was one of the stalwart pillars of the department,” said Daniel Rubenstein, the Class of 1877 Professor of Zoology, professor of ecology and evolutionary biology, and director of the Program in Environmental Studies.“He had an original mind and was so caring. He saw patterns in the natural world that others often overlooked, and he had a unique ability to identify why they came to be and how they worked. He was so generous and genuine in his encouragement of students and colleagues and provided personal and intellectual glues that helped hold the department together. He will be sorely missed.” 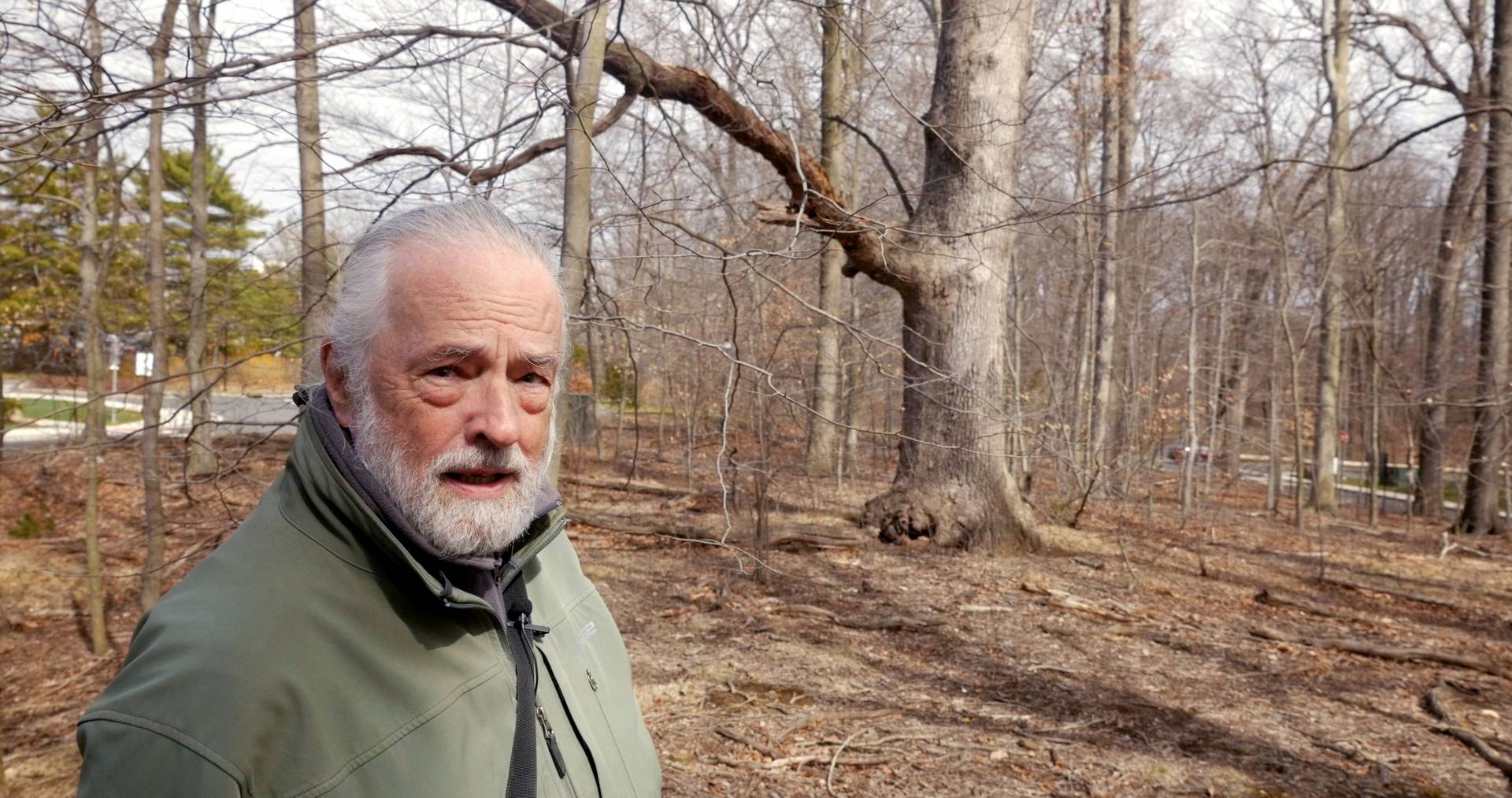 Photo by Jared Flesher for the Office of Sustainability

Simon Levin, the James S. McDonnell Distinguished University Professor in Ecology and Evolutionary Biology, said Horn was “a brilliant scientist who continued to add to the intellectual life of the department. He also was a wonderful human being. His principal impact was on the students, the culture, and the cultivation of the climate of good collegiality and good mentorship.”

A common theme in Horn’s work was a combination of geometry in conception, mechanical inventiveness in measurement, and “muddy boots” fieldwork in execution, noted an entry in the Princeton emeritus booklet upon Horn’s retirement.

Horn had a lasting interest in the growth of trees, in particular, how they got their shape and their branching patterns. Part of his tree work was published in “The Adaptive Geometry of Trees” in 1971.

Horn also studied the wind dispersal of seeds and forest succession, and he had a longtime fascination with butterfly behavior.

Two weeks before his death, he submitted a manuscript for his second book on the social behavior of butterflies, Levin said.

Horn was born in Philadelphia on Nov. 12, 1941, the son of Catherine Stainken and Henry E. Horn, a Lutheran pastor. His family moved to Virginia and Georgia, eventually settling in Cambridge, Massachusetts, where he attended Cambridge High and Latin School.

He completed his A.B. at Harvard University in 1962 and his Ph.D. at the University of Washington in 1966. His Ph.D. thesis was a pioneering study on the adaptive nature of the social behavior of blackbirds.

Over the years, Horn’s research took him across the continental United States and Canada, and to locations across the globe including Central and South America, Austria, Britain, France and Japan.

But it was the areas in and around Princeton that most-often served as a muse and a setting for his fieldwork and teaching.

Horn frequently could be found walking along the woods near Washington Road with binoculars dangling from his neck or at Stony Ford Research Station, a 99-acre farmland reserve located near Princeton’s campus, where students, faculty and staff conduct ecological and behavioral studies of plants, animals and the environment.

In weekly walking tours, which he offered informally throughout his career and retirement, Horn shared his knowledge and enthusiasm for local ecosystems with students and colleagues.

In recent years, Horn recorded videos of his frequent explorations as part of his Nature Walks series created by Princeton’s Office of Sustainability. The videos provided a primer on trees, skunk cabbages, black squirrels, peregrine falcons and mockingbirds.

“Henry was an amazing person, and I am not sure he even realized just how deeply respected he was by so, so many people,” said Bruce Lyon, a professor of ecology and evolutionary biology at the University of California-Santa Cruz who earned his Ph.D. at Princeton. “He was one of a kind.”

Horn was a mentor to generations of students.

"When I was a graduate student in what was then the population biology group (now the Department of Ecology and Evolutionary Biology), everyone had their official thesis adviser and everyone had a second, unofficial adviser who was Henry," said David Wilcove, professor of ecology and evolutionary biology and public affairs and the Princeton Environmental Institute. "His concern for the wellbeing of each and every graduate student was unwavering and unstinting, and his guidance made us all far better scientists and human beings than we would otherwise have been. That was true when I was a graduate student in the early 1980s, and it remained true until — and even after — his retirement a few years ago. His kindness, his keen intellect, and his puckish sense of humor were unrivaled. Princeton has lost a part of its soul."

Diane Wiernasz, an associate professor of biology and biochemistry at the University of Houston, and a graduate advisee of Horn’s said: “There are many things I could say about Henry — that he was the smartest person I have ever known, that he was a brilliant natural historian, that he was equally adept at ecological theory, that he could attend a biology seminar on any subject and ask something insightful. But what I will most remember about Henry is his generosity, especially with his time. I must have knocked on his door hundreds of times and asked ‘Henry, can I talk to you for a minute?’ He never said no, and he always said something that helped. He did this for everyone, whether or not they were his student. Henry shaped generations of graduate students, and every one of us is a better scientist for having known him.”

Horn was a singer, and he and his family regularly performed Medieval and Renaissance music in the community. He was a member of the Princeton University Chapel Choir, Musica Alta and the Princeton Madrigal Singers, for which he served as director from 1975 to 1989. He also was a guest artist for Engelchor Consort.

Penna Rose, director of chapel music in the Office of the Dean of Religious Life, said Horn was an active and generous member of the choir, sharing his musical gifts with fellow members of the bass section and assisting with cleanups and other unassigned tasks.

“One of our anthems is called ‘O Ye Badgers and Hedgehogs, Bless the Lord,’” Rose said. “Many animals, both familiar and obscure, are called upon to bless the Lord. Henry did an ecological analysis of the community, drawing a picture of each one, listing the citations and trophic status, analyzing the data and offering a conclusion. All this during one church service! It has become a cherished artifact of the choir.”

Horn exercised his creativity and sense of humor in numerous ways, maintaining several alter egos including “J. Chester Farnsworth,” “Elizabeth Seaport,” “Sherman Sindie” and “Belle Canto,” which he used for pursuits including poetry, sculpture and whittling. For years, he also dressed as Santa Claus for holiday gatherings at Prospect House.

An editorial consultant to Princeton University Press beginning in 1967, Horn was co-editor of Monographs in Population Biology, a continuing series of books intended to examine important aspects of the ecology of plants and animals. He served on the press’ editorial board from 1993 to 1998 and was editorial board chair in 1998.

Horn was a Bullard Fellow for Harvard Forest at Harvard University and a fellow of the American Association for the Advancement of Science. He served as a permanent principal investigator at the University of Arizona-Tuscon.

He led frequent workshops for K-12 school teachers and students, and in 2002 he was awarded a Certificate of Recognition for Commitment to Exemplary Science Education (K-12) from the Princeton Chapter of Sigma Xi.

In 2011, he received the Jack Gleeson Environmental Award from the Friends of Hopewell Valley Open Space, and in 2013, he was honored with the Environmental Leadership Award by the Stony Brook-Millstone Watershed Association.

A memorial service will be held at 1:30 p.m. on Sunday, May 5, in the University Chapel.

Donations may be sent to The Nature Conservancy.

View or share comments on a blog intended to honor Horn’s life and legacy.