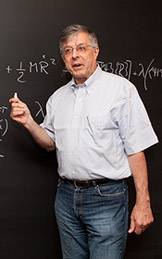 Roberto Car, Princeton's Ralph W. Dornte *31 Professor in Chemistry, co-developed "ab-initio molecular dynamics," a theory that has had a major influence on the creation of molecular simulations in all the basic sciences. A milestone in computational physics, the approach has dramatically influenced the methodology behind electronic structure calculations for solids, liquids and molecules. The blackboard behind him shows part of the Car-Parrinello equation that is at the heart of the theory.

Title: The Ralph W. Dornte *31 Professor in Chemistry and a faculty fellow of the Princeton Center for Theoretical Science

Scholarly focus: Car co-developed "ab-initio molecular dynamics," a theory that has had an enormous impact on the creation of molecular simulations with useful applications in all the basic sciences. This approach, which also goes under the name of the Car-Parrinello method, represented a milestone in computational physics and has dramatically influenced the methodology behind electronic structure calculations for solids, liquids and molecules. He has won several awards for his significant contributions to science, including the Dirac Medal, the Humboldt Award and the IEEE Computer Society's Sidney Fernbach Award.

Background: Car came to Princeton in 1999 after working at the University of Milan, the Swiss Federal Institute of Technology in Lausanne, the IBM T.J. Watson Research Center in New York, the International School for Advanced Studies in Trieste, Italy, and the University of Geneva.

You have a passion for your work, for science. What's the source of that drive?

It started early for me. I was born in Trieste (then briefly an independent city-state -- ceded back to Italy in 1954) after World War II, and grew up there until we moved to Milan.

After the war, Trieste was a special territory administered jointly by British and American forces. I remember military police in the street and a city landscape with rubble where buildings had stood. They had been destroyed by wartime bombardment. We moved to Milan when I was 8. My father worked in an office in the center of the city, and there were a few buildings next to his there, too, that had been leveled by bombs.

It did not make us feel downcast. Instead, there was this powerful sentiment among people that one could rebuild and forge a better society. It gave me a belief in progress, maybe a naive sense then because all of society's optimism didn't last, but I grew up thinking that we would be able to explain everything. It was what Einstein said, that the most astonishing thing about nature was not that it was complicated but that it was possible to understand it. My early life made me feel that eventually everything could be understood. To go about trying to gain that knowledge, I believed, all we would need to do would be to form the right questions.

My father died from cancer when I was 13. It was a big tragedy -- I was the only child. Perhaps it gave me some incentive to be good at school. I was very much attracted by science and technology, and I had some excellent teachers. They really inspired me to pursue my interests: basic physics and chemistry and electronics. I made some little experiments. I built a radio.

I was good in math at school, too, so I wanted to combine math with something concrete, with solving some problem in nature. I wasn't sure at the time about what was most interesting to me, either technology or science, when I started at university in Milan. Once I knew I was more interested in the basic principles of science, I studied physics as an undergraduate. Then I continued, and I received my Ph.D. from the Milan Institute of Technology. 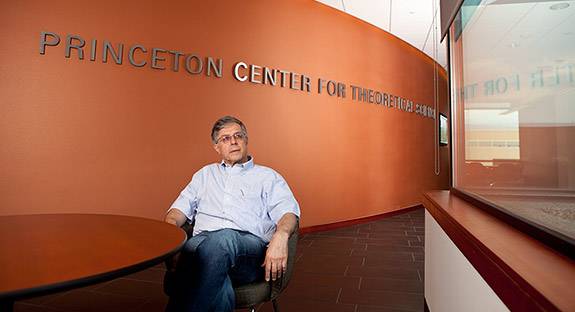 Car, who also is a faculty fellow of the Princeton Center for Theoretical Science, draws inspiration for his research from his experiences as a youth in Italy following World War II. "There was this powerful sentiment among people that one could rebuild and forge a better society," he said. "It gave me a belief in progress." Solving difficult problems is only possible, he adds, if researchers can set their imaginations free.

Molecular dynamics, the application of computer science to physical systems, has been described by some as a "virtual microscope" because, through simulations, it allows scientists to peer into the motion of individual atoms in a way that is not possible in laboratory experiments. For example, in the 1960s, a scientist successfully modeled the behavior of 864 argon atoms on a computer. What got you started on ab-initio molecular dynamics in the 1980s?

I learned a lot about electronic structure while I was a postdoctoral fellow at Watson. I started working with Michele Parrinello at the International School for Advanced Studies in 1984. Michele had more formal training in statistical mechanics and had spent some time in the U.S. at Argonne National Laboratory, where he had worked with the late Aneesur Rahman, one of the pioneers of molecular dynamics.

We started to think about how we could put together our complementary expertise and be bold at the same time and think some unconventional things. At that time, density functional theory was establishing itself as a very powerful technique to model the electronic structure of materials. [This quantum mechanical theory is concerned, in particular, with the placement of atoms and molecules.] Michele and I knew that if we could combine density functional theory with molecular dynamics then we might have something.

What were the limitations of density functional theory? And what were the difficulties you faced in combining it with molecular dynamics?

The limitation of density functional theory was that it could only be used to determine the most stable atomic arrangement. We knew how to do that for crystals, the atomic structure of which can be determined with diffraction experiments. There was no way, however, to prefigure which atomic arrangements were important in liquids or amorphous materials [because they don't have predictable shapes].

Moreover the limitation to static atoms precluded the possibility of studying thermal effects, which depend on atomic motion. [When heat is added to a substance the atoms move faster, leading to phenomena such as the transformation of a solid into a liquid.] Molecular dynamics could do all that -- model general atomic motion and simulate liquids and thermal phenomena -- but these empirical representations were too simple. The models lacked the predictive power of density functional theory. In establishing ab-initio molecular dynamics we succeeded in unifying molecular dynamics and density functional theory -- two very distinct worlds at the time.

Why did you call your method "ab-initio"?

We called our method the "unified approach for molecular dynamics and density functional theory" but very soon it was named "first-principles" or "ab-initio" molecular dynamics to stress that we did not rely on empirical models for simulating the interactions within atoms. These did not depend on parameters adjusted to reproduce experiments.

So what did you find?

When atoms move, they make a little displacement, but that doesn't mean that the electron structure has to be entirely recalculated. One should use the previous knowledge, and this led to novel differential equations. That could simplify the problem, we realized, without it being too simple. We were very excited. We worked a little bit on a piece of paper, and it looked as if it was right. Then we immediately wrote a simple (computer) code in a very simple system that was not realistic at all, but it showed that this idea could work. At the time, we didn't understand all the complexity. We were also lucky because we were working with a supercomputer center in Italy, and they were generous and gave us lots of time.

How did you attack the problem?

At the beginning, we were talking very fast and talking loosely about it, but it took several months to get it on paper. We worked on a first test case that was simple but nontrivial. We worked night and day. We would go home for dinner and then, immediately after dinner, we would meet again, sometimes staying in the office till 4 a.m.

Your paper, "Unified Approach for Molecular Dynamics and Density-Functional Theory," published in Physical Review Letters in 1985, became one of the journal's most highly cited articles of all time. How has your discovery impacted science over the long term?

Ab-initio molecular dynamics is now a standard technique and has been used in many areas, including materials science, chemistry and physics. It is quite important in studying materials or matter under extreme pressure and temperature conditions. For example, a few years back, we predicted that carbon under extreme conditions would behave in a certain way when it goes from being a crystal to a liquid. It was later confirmed in experiments.

Are there still questions that you are trying to answer?

The problems are difficult to solve if the description of the underlying electronic structure is not good enough. Also there are situations in which the basic assumption of molecular dynamics -- that atoms behave as classical particles -- is not adequate. There's a lot of work going on today to improve these basic approximations by improving representations of the physical effects. We are still working on ways to improve time scales so that we can truly represent what is happening without missing anything significant that can happen infrequently. This goes to the issue of rare events [such as matter state changes or chemical reactions] and developing techniques so these are not missed.

What advice do you have for researchers who are working on seemingly intractable problems?

You can solve things if you can let your imagination go and freely explore the problem. You can't be afraid that something is too difficult. There may be a way of circumventing that difficulty. One can explore unconventional ways. Sometimes that works and when it does, you will often find that the discovery is usually quite simple. The other thing that is typical is that new problems arise that you were not thinking about before. In a sense, when you find a way to go deeper into something, you find out that the complexity or mystery is not ended but that there are many more mysteries, and you are in a better position to tackle them. That is something that I appreciate a lot.

Are you still an optimist?

I think it is still possible to be an optimist. Mathematics gives us the power to condense our knowledge of phenomena into equations that can help predict behavior.