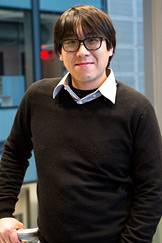 Nature performs remarkable feats of chemistry — enabling, for example, plants to take in sunlight, water and carbon dioxide to create their own food, and in the process, pump out oxygen for the rest of the planet.

Princeton University professor Garnet Chan's goal is to understand how these feats of chemistry take place, by going back to the quantum mechanical roots of the atoms and electrons involved. Such an understanding could lead to building new chemical tools — such as catalysts, which speed up reactions — and perhaps someday to harnessing processes such as photosynthesis for our own energy needs.

Chan, the A. Barton Hepburn Professor of Chemistry, joined the University in January 2012. He previously was an associate professor of chemistry and chemical biology at Cornell University, and received his Ph.D. from the University of Cambridge in 2000. He was born in London and grew up in Hong Kong.

Below, Chan explains his research on using quantum mechanical laws — the rules that describe atoms and other very small particles — to understand how photosynthesis works. The research was published earlier this year in Nature Chemistry. Chan's portion of the research for the paper was funded by the U.S. Department of Energy.

Why are the laws of quantum mechanics so important for chemistry?

The basis for all of chemistry is quantum mechanics, because these laws describe the basic properties of atoms and electrons, and of chemical bonds. 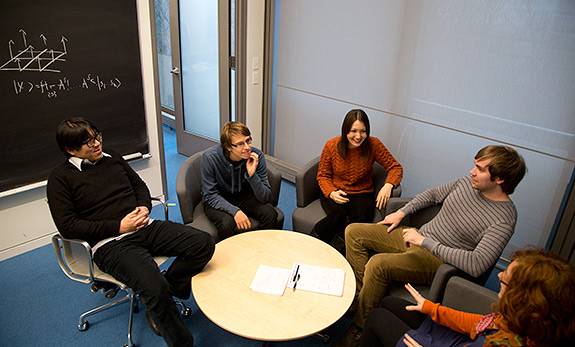 Chan and members of his lab group discuss avenues for research in Frick Chemistry Laboratory.

What big question would you like to solve given your talents and interests?

Ultimately, I am interested in the question of how to go from the basic equations of quantum mechanics to understanding phenomena in the world. There are many poorly understood phenomena, ranging from catalysis to high-temperature superconductivity, and I am interested in all of them.

As a child I was mainly interested in mathematics. But in high school, I had a great chemistry teacher, Caroline Crone. Eventually it became clear to me that theoretical chemistry was where I wanted to end up. In hindsight, this seems a natural direction, given my childhood interests in mathematics. Also, I was absolutely terrible in the lab. 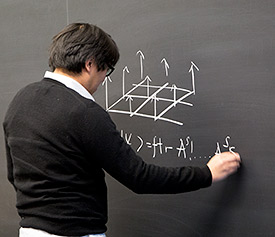 The mathematical formulation that Chan is writing out is an example of a tensor network state. These kinds of formulations help translate biological systems to quantum mechanics.

What have been the barriers to using quantum mechanics to understand chemical reactions?

As you can imagine, it is a hard problem even if you have very large computers. For many years, people thought that trying to do direct calculations of the properties of a large molecule from quantum mechanics was simply not possible.

What sort of progress have you made in this area?

One of the main things this paper shows is that, even for large systems of biological interest, such as one of the central molecules involved in photosynthesis, you can in fact predict its properties directly from quantum mechanics.

Why is it important to study photosynthesis?

It is still a mystery how biological systems can do a lot of amazing chemistry that humans require a lot of effort to do. In photosynthesis, the plant takes in water and sunlight and from it produces oxygen. Usually this process requires a lot of energy and very extreme conditions, but plants happily do it under everyday conditions. So there is some remarkable chemistry going on.

Which step in photosynthesis did you study for this paper?

We studied a structure called the oxygen-evolving complex, which is the main chemical system that produces oxygen. We looked in detail at what the electrons are doing during the release of oxygen from water molecules. The detailed computational work was conducted by my colleagues Yuki Kurashige and Takeshi Yanai at the National Institutes of Natural Sciences in Japan, using the theoretical methods developed earlier in my lab.

What did you discover?

We studied the electronic structure at discrete stages of its catalytic cycle and in our paper we presented depictions of what the electrons do at every stage.

When one gets into the details, this cluster of atoms is a bit like an engine — it goes in a cycle like a combustion engine. We also found that the current understanding of one of the stages of the cycle, called the S2 stage, clearly has to be wrong. We don't know what the right electronic model is, but now we can go back and find that out for this S2 state. 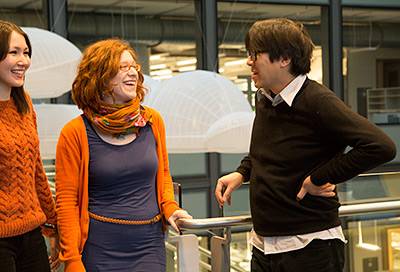 How exactly do you use quantum mechanical laws to study production of oxygen in the oxygen-evolving complex?

We solve the equations of quantum mechanics, and when we do, the solution we get is a very complex object called a wave function, which in principle contains all the information about the system, such as the positions of all the different atoms and electrons in the system.

What is a wave function?

Quantum mechanics gives you a probabilistic view of what is going on, so a wave function tells you the probability of different electrons doing different things at any given point and time. If you have many electrons, you need to think in terms of conditional probability — for example, if you have two electrons, you have to talk about the probability of the first electron doing something if the second electron is doing something else. This becomes very complex when you consider systems with many electrons.

How do you handle this complexity?

From a technical perspective, what makes this paper a sort of a landmark in this type of calculation is that we consider these conditional behaviors, but we make the calculations easier to handle by eliminating behaviors that are not practical in nature.

Over the last decade or so, researchers have realized that nature does not explore all the possibilities for the behavior of electrons. For example, the laws of quantum mechanics allow for an odd concept called entanglement, which means that even if I separate two particles by a giant distance, the behavior of one can still be correlated with the other. Although this is a valid quantum state, it has become understood that in real physical systems, these possibilities often cannot occur.

If you rule out these really weird behaviors, then the quantum mechanics becomes much simpler, much closer to classical mechanics, which we do know how to model efficiently.

In this video, Chan collaborates with his research group over a 48-hour hack-a-thon to create an open-source software tool for their work in quantum mechanics. (Video courtesy of the Department of Chemistry)

Will we ever fully understand how such a complex process as photosynthesis works?

It depends on what you mean by "understand." When you grow a plant, you have to understand something about photosynthesis because if you do not give it light it won't grow very well. But another way to understand something is to try to model it and perhaps create an analogue of the process. If you can model what is going on, then you can also design something to make it better.

So is this study about mimicking nature?

Perhaps. If we assume nature is quite optimal, then that is the way to go. As it is, though, humans do not always find the same solution that nature does, and alternative solutions can be very good. For example, look at the wheel. There is no biological organism with an axis and a rotating disk. Similarly, our use of silicon-based solar panels has proved to be already quite efficient at harnessing solar energy and turning it into electricity.

What is next in this line of research?

The methodology we established in this paper can be applied to many other biological processes. The next step would be to apply the same techniques to other complex systems and other molecules, and turn prediction into design.