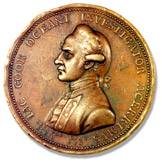 "Straight Through: Magellan to Cook and the Pacific," an exhibition focusing on 250 years of Pacific Ocean exploration, runs through Jan. 2 in Firestone Library's main gallery. The exhibition is devoted to 13 renowned explorers, including British mapmaker Capt. James Cook. In addition to maps and books, the display includes this bronze medal featuring a portrait of Cook, issued by the Royal Society in 1784.

An exhibition of historic maps and rare books, focusing on 250 years of Pacific Ocean exploration throughout the 16th, 17th and 18th centuries, will run through Sunday, Jan. 2, in Firestone Library's main gallery.

Presented by the library's Department of Rare Books and Special Collections, "Strait Through: Magellan to Cook and the Pacific" covers a dynamic period of global exploration that took place between the 1520s and 1770s. Chronological maps of the Magellan Strait, Pacific Ocean and Spice Islands form the backdrop to exhibition cases devoted to 13 of the most renowned explorers and explorer pairs, including Portuguese sea captain Ferdinand Magellan, who led the Spanish expedition that was the first to navigate around the world; Spanish navigator Alvaro de Mendaña de Neira, the first to reach the Solomon Islands in the Pacific; English sea captain Sir Francis Drake, the second to circle the globe; England's William Dampier, who was the first to circumnavigate the world three times; and British mapmaker Capt. James Cook. 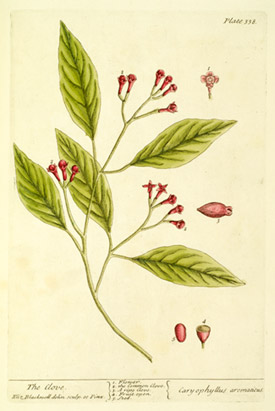 The exhibition covers exploration of the Indonesian archipelago of the Moluccas, or Maluku Islands, commonly referred to as the Spice Islands. The islands figured prominently in the history of the European spice trade. The exhibition includes a clove image (above and above right) taken from Elizabeth Blackwell's 1739 book documenting the medicinal uses of herbs.

"These are fundamental historic maps and narratives, some of which were the first to represent these explorers' discoveries," said John Delaney, curator of the library's Historic Maps Collection. "As such, they were among the first to focus the eyes of Europe on the Pacific."

Also on view will be a rare first-state copy of Cook's 12-sheet chart of the St. Lawrence River, the navigator's first major published map, which launched his career. Manuscript parts of the chart were instrumental in the British defeat of the French at Quebec City in 1759. A large-scale model replica of Endeavour, Cook's flagship of his first circumnavigation, also will be shown.

The exhibition will be open from 9 a.m. to 5 p.m. Monday through Friday, and noon to 5 p.m. Saturday and Sunday. 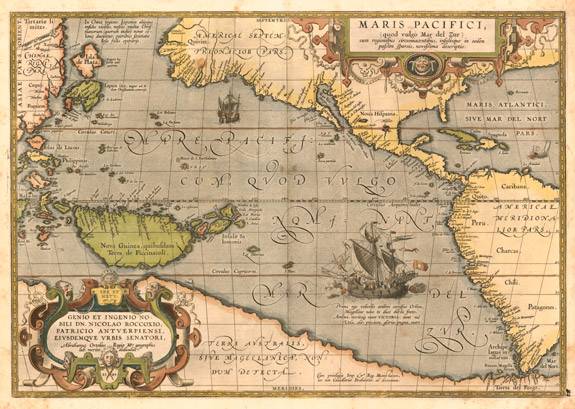 One of the items on display is the first printed map devoted to the Pacific Ocean. Engraved in 1589, this map initially appeared in the 1590 addition to explorer Abraham Ortelius's famous atlas, which was the first collection of uniformly sized maps. The exhibited copy comes from the 1595 Latin edition of the atlas.