Below left: The exhibition includes this version of a 1541 woodcut map by German geographer Martin Waldseemüller taken from Ptolemy's "Geographia." It shows the southern tip of Africa, along with several drawings, including one of the king of Portugal in the lower right riding a bridled sea monster. It was during Manuel I's reign from 1495 to 1521 that Vasco da Gama discovered the route to India — toward which the figure on the map heads.

The evolution of the map of Africa will be presented in an exhibition of historic maps and European explorers' narratives from the University Library's Department of Rare Books and Special Collections. The show, "To the Mountains of the Moon: Mapping African Exploration, 1541-1880," will open at 5 p.m. Sunday, April 15, in the main exhibition gallery of Firestone Library.

A public lecture by geophysicist and expedition leader Pasquale Scaturro will precede the opening at 4 p.m. in 101 Friend Center. The talk, "The Exploration of the Great Rivers of Africa," will be simulcast in 104 Computer Science. Scaturro organized and led the historic Nile First Descent Expedition, which traversed 3,260 miles from the mountains of Ethiopia to the Mediterranean Sea from December 2003 to April 2004.

The library exhibition will feature some of the most historically significant maps of Africa by major cartographers such as Sebastian Müenster, Abraham Ortelius, Willem Janszoon Blaeu and Vincenzo Coronelli. The show will have a particular focus on the journeys of missionary David Livingstone, adventurer Sir Richard Francis Burton and journalist Henry Morton Stanley. Exhibition cases also will cover the expeditions of two dozen of the other most noted European explorers in Africa, including Sir Samuel White Baker, Heinrich Barth, James Bruce, René Caillié, Mungo Park and John Hanning Speke. 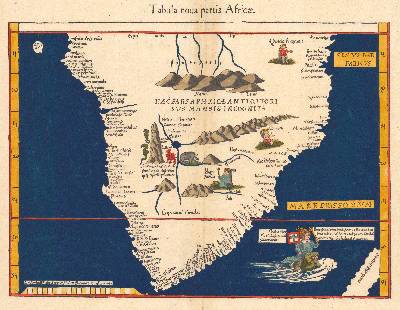 "Behind each map is a great story. The exhibition documents what the men encountered  on their incredible travels," said John Delaney, curator of the library's Historic Maps Collection. "On display are these explorers' published narratives, open to their own maps, illustrated with their own drawings and captioned in their own words."

According to Delaney, European mapping of Africa took place over a period of 400 years, but cartographic advancements primarily benefited from the 19th-century expeditions of British, French and German explorers.

"The exhibition demonstrates how improving or correcting maps of Africa was not possible without the efforts of adventurers who were willing to risk their lives in the field to prove each geographic fact," he said. "They brought with them their own biases and expectations. And, unwittingly, perhaps, the men and their maps enabled the 'scramble for Africa' by the colonial powers at the end of the 19th century."

Delaney said European explorers sought several "geographic prizes" during their missions in Africa. Those included: reaching the fabled city of Timbuktu; navigating the entire length of the Niger River; and beholding the Mountains of the Moon, which were believed to be the source of the Nile River and were first depicted on ancient maps by the Greek geographer Ptolemy.

English journalist Stanley came closest to achieving the quest for the so-called "Mone Lune" with his discovery in the late 1880s of the Ruwenzori mountain range, between Uganda and the Democratic Republic of the Congo, whose snow-capped peaks are a distant source of some of the Nile's waters.

"One of the reasons for the exhibition is that Africa is never out of the news yet remains for most of us a perpetual enigma," Delaney said. "The collection of visually-appealing maps, coupled with illustrations and writings by the men who journeyed the continent, will expand one's appreciation for the richness, diversity and history of Africa."

Several of the maps featured in the exhibition were purchased through a donation from Bruce Willsie, a 1986 alumnus. An illustrated catalog of exhibition works has been produced through contributions from Willsie and the Friends of the Princeton University Library, the Davis Center for Historical Studies, the Council of the Humanities and the Program in African Studies.

The exhibition will run until Sunday, Oct. 21, and is free and open to the public. The gallery is open from 9 a.m. to 5 p.m. Monday through Friday, and from noon to 5 p.m. Saturday and Sunday. The illustrated exhibition catalog featuring a foldout timeline of European exploration in Africa may be purchased for $20. For more information on the library exhibition, contact Delaney at (609) 258-6156.

The opening exhibition lecture by Scaturro is sponsored jointly by the Department of Rare Books and Special Collections and the University Committee on Public Lectures. For information, visit the Public Lectures website.