The Princeton University Library has completed a multiyear project of digitizing a collection of 19th- and 20th-century maps that illustrate the history and development of communities around New Jersey.

The Department of Rare Books and Special Collections has cataloged and scanned some 16,000 lithograph sheets of 21-by-25-inch Sanborn Co. fire insurance maps that have been in the library's Historic Maps Collection since the 1970s.

Fire insurance maps, pioneered in the United States by the Sanborn Co. in the mid-19th century, enable insurance companies to determine the risk and liability of a property based on data such as the size, shape and function of buildings or the materials used to build particular structures. The University's collection of New Jersey Sanborn maps range from 1884 to 1950 and remain of interest today as historical resources about properties and towns across the state. 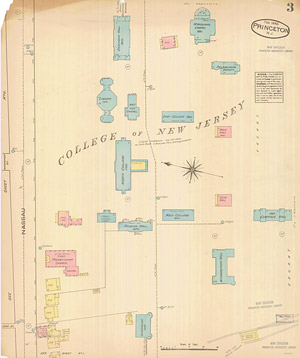 This Sanborn Co. fire insurance map offers a view of the Princeton campus from 1885, when the University was known as the College of New Jersey and the landmark Nassau Hall on the front campus -- located in the center of the map -- was referred to by the nickname "North College." View a high-resolution version (.jpg). Image: Courtesy of the Princeton University Historic Maps Collection

"If you look at Nassau Street [in downtown Princeton], for example, it's amazing to see the change it has undergone," said John Delaney, curator of the Historic Maps Collection. "In the 19th century, Princeton was more of a college town. You had rooming houses and pool halls, cobblers and tailors, laundries, confectionaries, stables and even ice houses. What were the retail operations of a town in the 1880s or '90s? You get a sense of that from looking at all the shops and stores in the town."

Sanborn maps are widely used by architects, urban specialists, historians, geographers, genealogists, planners, environmentalists and others seeking to learn about the development of neighborhoods, towns and cities. Delaney noted that, when building roads, government agencies have reached out to the University to find out what kind of business operated on a currently vacant piece of land 100 years ago.

Some maps even denote whether or not there was a night watchman on a property, which helped insurers to assess risk. "There's a lot more to Sanborn maps than visual appeal," Delaney said.

The Library of Congress gave the University a duplicate set of the New Jersey Sanborn maps in the 1970s and, similarly, gave duplicates to other research institutions, such as collections of Massachusetts and New Hampshire maps to Harvard University and Dartmouth College.

The cataloging and scanning project, which involved library staff as well as student workers, began in 2003. The work was accelerated in 2008 by a grant from the New Jersey Historical Commission, Delaney said.

An online catalog of the Sanborn records is available on the library's website. Viewers can access the online maps, organized by county and town, from an Excel spreadsheet available on that site. The original maps can be viewed in person in the reading room of the Department of Rare Books and Special Collections. Only maps published up to 1922 are available for viewing on the website, and they are not downloadable. Those interested may contact the department to obtain digital images for printing at (609) 258-3184 or rbsc@princeton.edu. Sanborn maps published after 1922 are owned by Environmental Data Resources Inc. and require permission for duplication.

The library also has online access to black-and-white microfilm copies of all of the Sanborn maps in the United States, but as Delaney noted, color is important because it indicates the construction material of the property. The images from the color digital copies are also clearer, cleaner and of higher resolution.