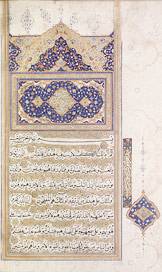 While the digital library emphasizes rare or unique texts of academic research interest, it also includes a selection of Persian illuminated manuscripts. This Quran, part of the Robert Garrett Collection, is most likely of Persian origin from between the 16th and 17th centuries. It is written in Nasta'līq script, one of the main genres of Islamic calligraphy. Images: Courtesy of Princeton University Library Department of Rare Books and Special Collections

Princeton University has placed a new digital library of 200 Islamic manuscripts online for scholars to consult and study.

These manuscripts were selected from some 9,500 volumes of Islamic manuscripts in Arabic, Persian, Ottoman Turkish and other languages of the Muslim world in the University Library's Department of Rare Books and Special Collections. Princeton's extraordinary holdings constitute the premier collection in the Western Hemisphere and among the finest in the world, according to Don Skemer, curator of manuscripts.

The digital library is a major component of the Islamic Manuscripts Cataloging and Digitization Project, begun in 2005 with the generous support of the David A. Gardner '69 Magic Project. Eventually, all of the manuscripts will be cataloged online, which involves creating bibliographic records containing basic descriptive information that helps researchers decide whether to order microform copies or to visit the library in person.

"The Islamic Manuscripts Cataloging and Digitization Project was conceived specifically as a way for the library to improve access to these rich collections and share them worldwide through digital technology," Skemer said. "It is hoped that the project will make a contribution to international understanding and serve as a gesture of good will to a critical part of the world."

Michael Cook, the Class of 1943 University Professor of Near Eastern Studies and one of the leading Islamicists in America, said, "Princeton has 9,500 Islamic manuscripts in Arabic and other languages in a location that is very convenient for scholars based in North America, but far less so for those based in the Islamic world or Europe. Most of the collection is described in printed catalogs, and scholars can always obtain microfilms of the manuscripts. But the printed catalogs are old and not available everywhere, while microfilms often provide images of poor quality. The online digital library thus marks a major advance in providing up-to-date descriptions of the manuscripts to anyone who can log onto the Web, and in making at least some of the manuscripts available online in fine-quality digital images." 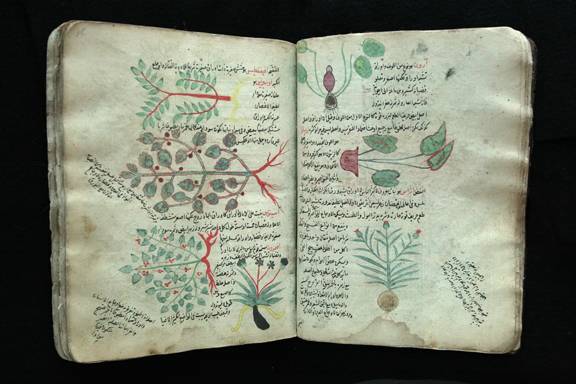 The digital library includes this Arabic botanical manuscript from the 15th century that is from the Robert Garrett Collection donated to the University in 1942.

Approximately two-thirds of the manuscripts were donated to the University in 1942 by Robert Garrett, a member of Princeton's class of 1897. But the library has continued to build this collection since then.

The digitized manuscripts date from the early centuries of Islam until the fall of the Ottoman Empire. They originated in all parts of the Islamic world, from Moorish Spain and northern Africa in the West, through the Middle East, and to India and Indonesia in the East. Subject coverage is fairly encyclopedic, including history, biography, philosophy and logic, theology (based both on the Quran and tradition), law and jurisprudence, language, literature, book arts and illustration, magic and occult sciences, astrology, astronomy, mathematics, medicine, and other aspects of the spiritual and intellectual life of the Islamic world.

While the digital library emphasizes rare or unique texts of academic research interest, it also includes a selection of Persian illuminated manuscripts and Mughal miniatures, such as a magnificent 18th-century Indian album of miniatures and calligraphy.

Princeton expects to add more manuscripts to the digital library in the future, besides producing the online bibliographic descriptions.

Click here for access to the digitized manuscripts. From this webpage, click on "View the Digital Library" and select any of the 200 manuscripts, which are listed both alphabetically and by subject and genre.

For more information about the project, contact Skemer at dcskemer@princeton.edu.