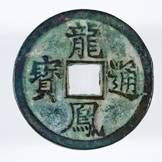 This coin from the Wu Collection dates from between 1279 and 1368. The actual diameter is about one and a half inches.

A gift of more than 2,000 coins to the Princeton University Library's Department of Rare Books and Special Collections will make relics from ancient and medieval China available to researchers on campus and around the world.

Lawren Wu, a 1992 alumnus, arranged for the donation from his mother, Tung Ching Wu, in memory of his father, the late collector and DuPont chemist Souheng Wu.

"The Wu Collection is notable for the care with which it was assembled, with many examples that are extremely rare or notable for their subtle variations in calligraphy," said Alan Stahl, curator of the University Numismatic Collection.

Part of the extensive assemblage can be viewed on the department's new online database for numismatics. Stahl said he believes Princeton may be one of the only institutions to catalog its collection of Chinese coins on the Internet.

Susan Naquin, professor of history and East Asian studies, said the coins are a good resource for studying important aspects of Chinese history, especially mining and metallurgy, and can be used to trace the waxing and waning of government power.

"The coins are not just for collecting; they are repositories of historical information," Naquin said, explaining that a coin's composition can reveal much about the economic and political conditions at the time it was minted.

"In later eras China had a mainly bi-metallic monetary system of silver ingots and copper coins," she said. "In the 19th century, China suffered a widespread price deflation because it was spending its silver buying opium and had depleted its copper mines."

Chinese coins are unusual, Naquin also noted, in being inscribed with the reign name of the current ruler but never his picture.

Stahl said the Wu gift greatly augments the University's collection of Chinese coins, with a comprehensive representation of the coinage from the Tang, Sung, Yuan, Ming and Qing dynasties. There are also pieces from the non-Chinese dynasties of the 12th century and the period of the Mongol Yuan Dynasty.

"The Wu Collection is rich in round copper coins with square holes from the ninth through 19th centuries, which nicely complements our earlier holdings of ancient issues of China in the shape of knives and spades," Stahl said.

Rarities in the collection include a four-character Qi knife coin, two examples of the Wang Mang gold inlaid knife coins and a piece from the Tang Dynasty Kaiyuan coinage in silver.

Stahl said he hopes to organize a student project this semester to display noteworthy pieces in an exhibit at Firestone Library.

Students already are helping Stahl photograph and catalog the Wu Collection for the online database, which features about 1,500 of the University's total collection of 60,000 coins. The University started the database in 2005 to provide Web-based access to the collection through a searchable catalog with photographs and descriptions of the objects.

The Princeton Numismatic Collection was started in 1849 when friends of the University bought and donated a collection of plaster casts of Greek and Roman coins. Today, the collection has vast holdings of Greek and Roman coins, and also includes coins from the Byzantine, Western Medieval and United States Colonial eras. In addition, it includes more than 2,000 U.S. and world medals.

"The University is known for its holdings of Greek and Roman coins, but the Wu family donation will make Chinese coins another important part of our collection," Stahl said.

The collection is available for research to the University community and the public. To view the online numismatic database go to www.princeton.edu/~rbsc/department/numismatics. For more information and appointments to view specific items, e-mail Stahl.