Aidan Gray, a Princeton senior majoring in classics, came well-prepared to his class on “The Vikings: History and Archaeology.”

He was eager to recreate an inscription from the ninth-century Kingmoor Ring — housed in the British Museum — with an image he’d found online. But as he inspected the thin aluminum strip, less than two inches long, onto which he’d planned to carve its protective spell, he became concerned.

“Carving 30 runes onto this is going to be a challenge,” he announced, referring to the letters of an ancient alphabet used by the Norse.

That was very much the point of the lesson. 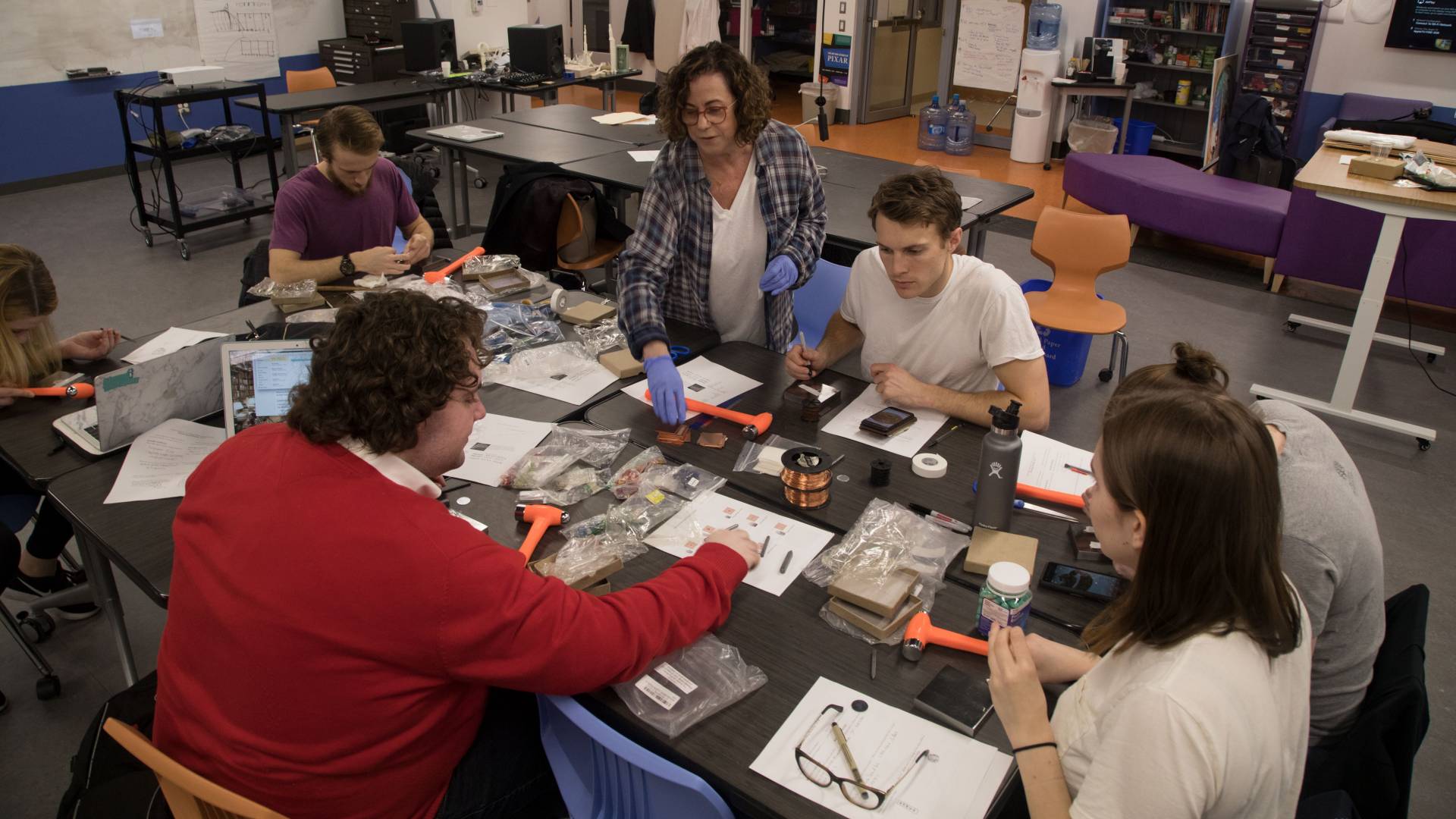 In the Princeton course "The Vikings: History and Archaeology,” guest Nancy Troske (standing), a Princeton-based jewelry artist, leads students in a lesson that allowed them to create personal items similar to those found in Viking culture. The course is being taught by Janet Kay, a lecturer in the Humanities Council and history.

Since few sources exist about the Viking Age (circa 800-1050 AD) written by the Norse themselves, one of the best ways to gain some understanding of their way of life is through archaeology and material culture, said the course's instructor, Janet Kay, a lecturer in the Humanities Council and history and a Cotsen Postdoctoral Fellow in Late Antiquity in the Society of Fellows in the Liberal Arts. The exercise of replicating items they would have used in daily life offers further insight into their society, she said.

The overall course examines Norse culture and society in Scandinavia and abroad and how Viking raids and settlement affected the British Isles and Northern Europe.

Kay assigned some contemporary reading, along with sagas and epic poetry that primarily were transmitted orally but have since been committed to the page.

Most of what we know, she said, is through what is left of Norse settlements and burials. By exploring everyday objects, in particular, students can “uncover what we can’t see in the texts,” Kay said. 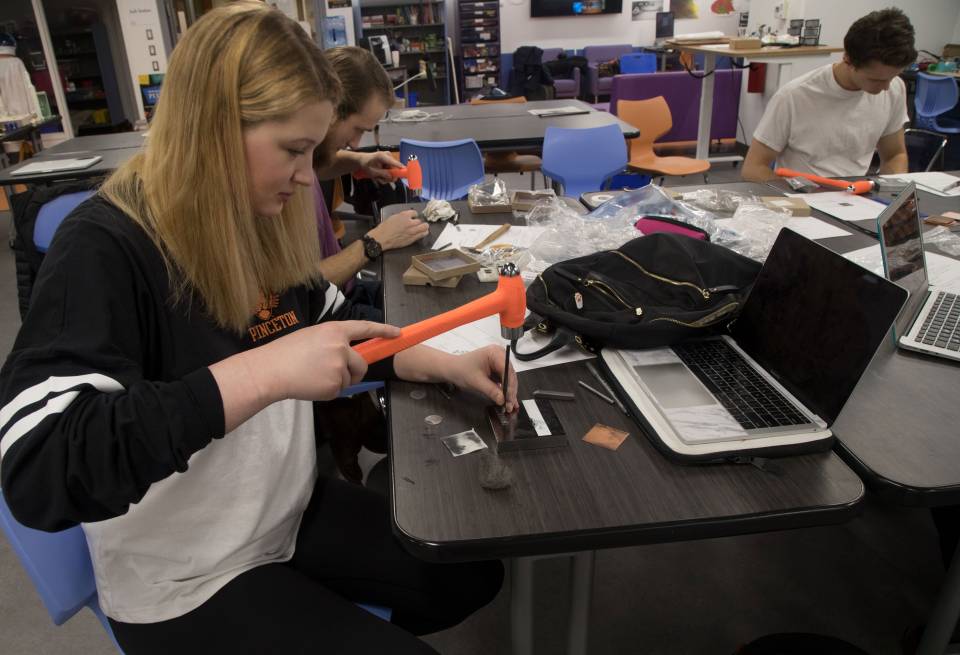 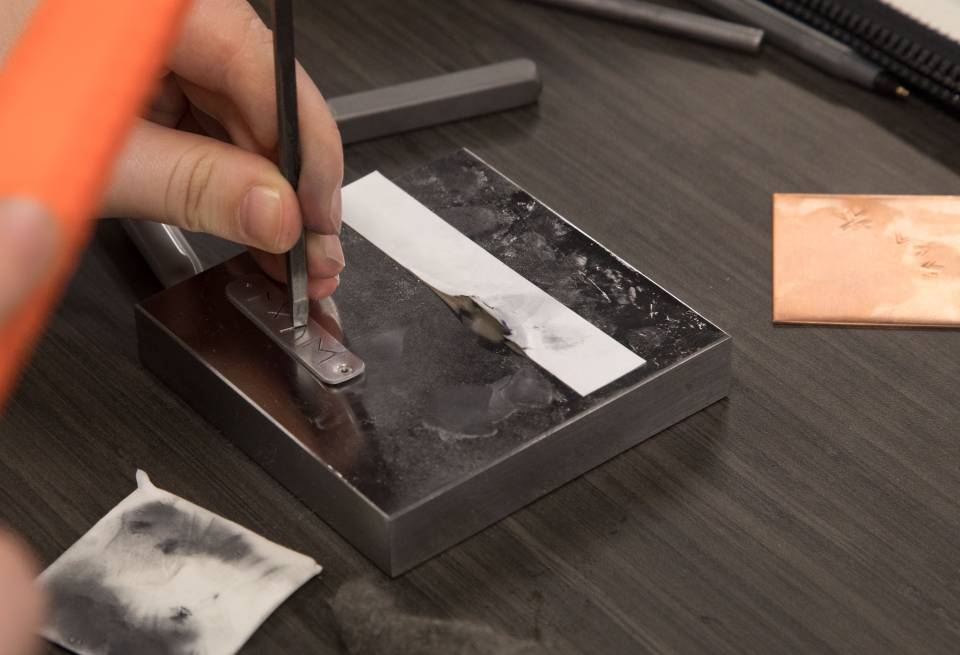 Carley Stamps, a junior, hammers a die to create a runic design.

Runes might be made up only of simple lines, but students in the course agreed that forging the marks by hand onto small pieces of metal was a challenge that gave them a new appreciation for Viking artifacts.

Before Gray and his 10 classmates recreated Viking-era metalwork and metal styles onto small aluminum and copper blanks, Kay wanted the students to gain an understanding of the entire manufacturing process. Silver mines were rare in Northern Europe, so Kay first needed to explain how the Norse obtained their precious metal.

“We want to think about these objects as the final product of a larger trade system,” she said.

The Vikings, she said, captured people and sold them for silver in the Mediterranean — areas controlled by caliphates — then brought the silver home. For one class, Kay took the students to visit the Princeton University Numismatic Collection in the Department of Rare Books and Special Collections at Firestone Library to view silver coins from the Islamic Empire. Similar coins would have been acquired by the Norse through the slave trade and raids. 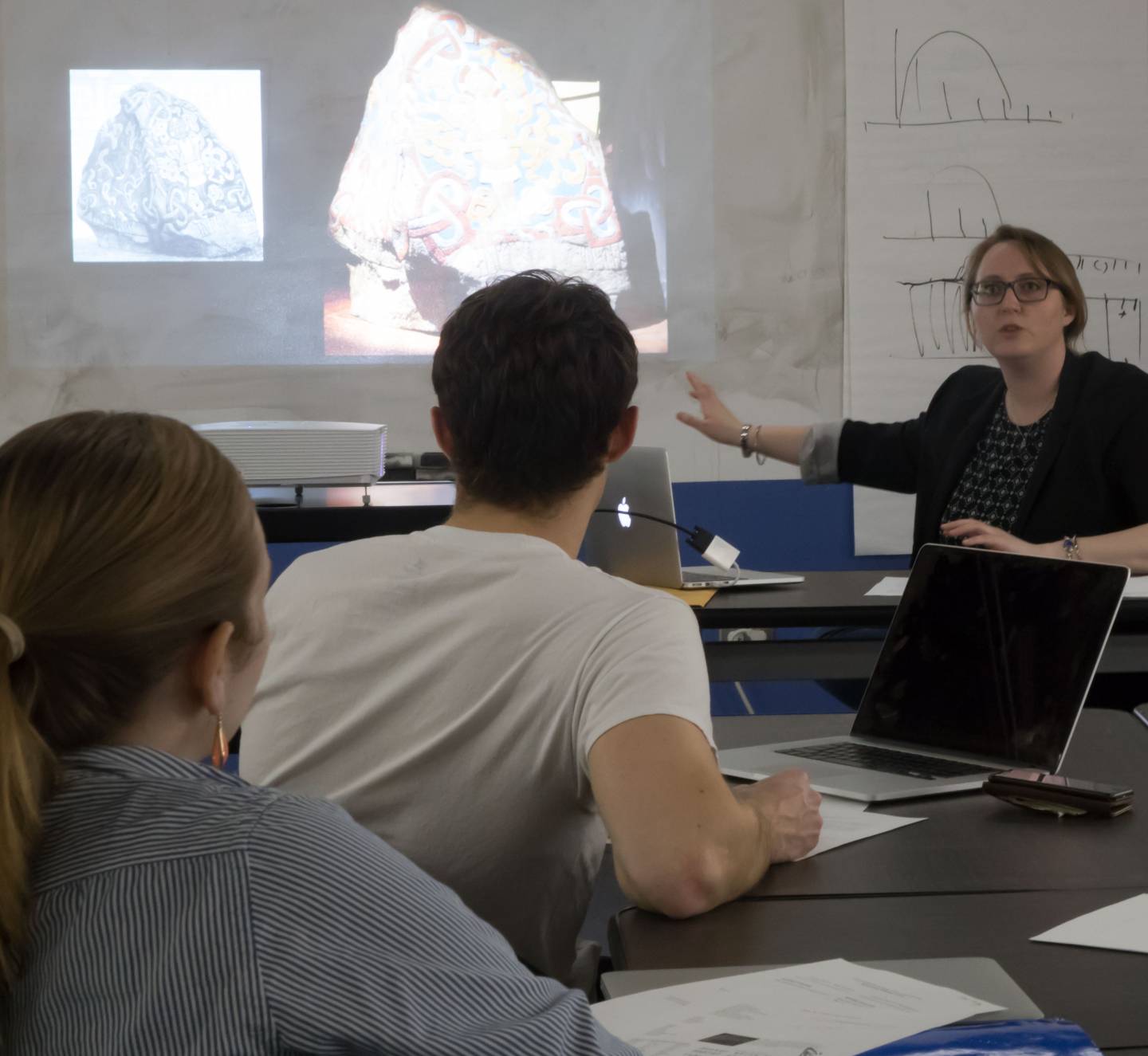 Kay gives a quick lesson about runic inscriptions on objects and how they were used as memorials, markers of ownership or short communications. Here she compares a reproduction of the Jelling Stone to the original, commissioned by Harald Bluetooth, the first Christian king of Denmark.

Kay then invited Matthew Delvaux, a doctoral candidate at Boston College and an expert in early medieval Norse culture and society, to explain the Viking-era slave trade. “The students know where the objects started from, and how they got to Scandinavia, so they can understand the whole production of these objects through the workshop,” Kay said.

The workshop, funded by the Department of History, allowed students to create their own Viking-inspired baubles and artifacts. The class met on a February afternoon in the CST StudioLab in the basement of Fine Hall. Students were supplied with hammers, stamping tools and small metal squares, circles and oblongs, onto which they could imprint lines or dots, replicating runes or circle-dot designs. They also used leather cord, copper wire and glass beads to create more decorative and wearable items.

Nancy Troske, a Princeton-based jewelry artist who specializes in ancient jewelry-making techniques, coached the students through the exercise, which was intentionally simple. “This is something Janet and I thought of,” she said. “[Viking] jewelry is very basic.”

The Norse, she explained, would have used hammers to flatten mined or cast ingots of silver, and iron punches to create designs. Their objects often were made of unwanted scraps of old and damaged silver objects (known as hacksilver), or coins. The Norse also used plaited and twisted wire.

Much medieval art was portable — rather like the small items the students created — because people during that era often were on the move, Troske said. “People took their wealth with them,” she said.

The tools for making the jewelry have changed dramatically. “Today we have rolling mills, refineries for obtaining pure metals, steel hammers, blocks and punches, metal steel blade saws, and torches with varying tips sizes and canisters of gas,” Troske said. “We used Sharpie pens [in the class] to blacken the recesses of the designs; back then they used ‘niello,’ a silver sulphide black paste.”

For polishing, the students rubbed pre-impregnated polishing pads and steel wool across their handiwork. It’s not known for sure how the Vikings polished their pieces, but it is believed they might have used iron oxide in wax (most likely beeswax) and ear wax for the final polish, Troske said. 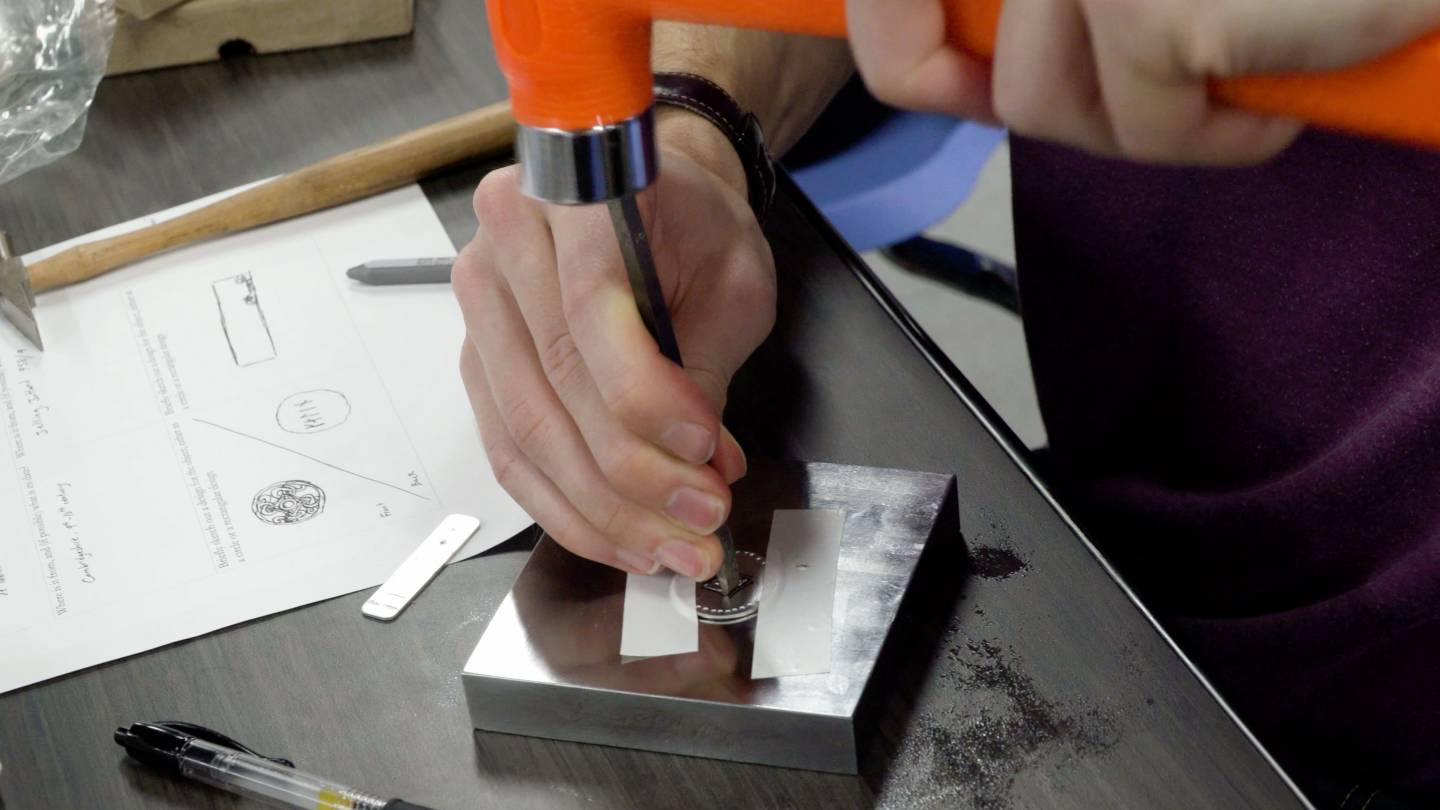 Precision is required as senior Galen Mayhew uses a straight-tipped tool to pound Viking-inspired knotwork onto an aluminum round the size of a quarter.

Sophia Feist, a senior majoring in art and archaeology, took a hammer in hand and made an immediate assessment of her own skill. “I’m definitely going to injure myself,” she joked.

Troske reassured her. “That’s OK,” she said. “You can see the ones the Vikings made were not even.”

Feist chose a pattern from an armband on display at the British Museum, as well as a brooch design. After several taps of the hammer — her fingers still intact — she settled into her work.

“This hands-on, experiential learning gives you more respect and understanding of the processes behind it,” Feist said later. “It was a really valuable experience. When I look at this kind of metalwork, I will look at it with different eyes.”

The clinks and thuds of hammers landing on a die stamping a metal object set atop a steel block became louder and louder as the class progressed. Some students were more successful than others in working with their miniscule media.

Helena Van Brande, a junior concentrating in comparative literature, first attempted a runic inscription from the Karlevi Runestone, dated to about the 10th century. She then tried to replicate an artifact in the early-Norse, Borre style (often interlacing geometric patterns) with a trefoil (three-leaf detail) at the center. She recreated the trefoil but had to forego the rest of the design due to the limits of the tools and small size of the metal.

“I can barely imagine how artists more than a thousand years ago created things so intricate and beautiful that still last to this day,” she said. “We didn’t work with stone at all, and I can imagine that even carving straight lines for runes on a stone would have been exhausting.

“It definitely makes us wonder about the complexity of Viking culture,” she added. “We often assume they are an illiterate culture, but as the rune stones demonstrate, there was definitely some sort of written language, and we can only imagine how rich their oral traditions might have been.”

Gray, too, said he appreciated the complexity of the simple inscriptions and designs. “I think I learned if I were a Viking, I would not be a skilled craftsman,” he said. “That would not be my role in society. I would just learn oral poetry and recite the Eddas.”

Shown in the slideshow below are items of jewelry created by students in the course.