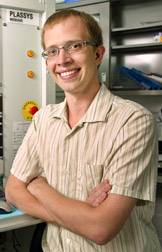 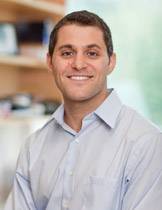 U.S. President Barack Obama has named Princeton's Andrew Houck and Joshua Shaevitz as recipients of the Presidential Early Career Awards for Scientists and Engineers, the highest honor bestowed by the federal government on young professionals in the early stages of their independent research careers.

"Science and technology have long been at the core of America's economic strength and global leadership," Obama said in a statement announcing the awards. "I am confident that these individuals, who have shown such tremendous promise so early in their careers, will go on to make breakthroughs and discoveries that will continue to move our nation forward in the years ahead."

Houck was nominated by the Department of Defense for the award. The National Science Foundation recommended Shaevitz.

Houck, who wants to build the world's first quantum computer, studies electronics on a microscopic level. He is focused on developing fully quantum mechanical circuits. He joined the Princeton faculty in 2008.

Houck earned his bachelor's degree in electrical engineering from Princeton, graduating as the valedictorian of the class of 2000. After earning his Ph.D. in experimental physics from Harvard University in 2005, he conducted postdoctoral research at Yale University.

He was named a Sloan Research Fellow to fund work on applying quantum mechanics to the fields of computing and optics. He also was named to Technology Review magazine's list of the top 35 young innovators for 2009.

A faculty member since 2007, Shaevitz is interested in the role that mechanical forces play in biology, especially how microscopic proteins can exert these powerful forces in larger cells. He is studying how tiny filaments can help define how cells organize themselves, and he is developing new experimental techniques to explore these topics.

After earning his Ph.D. in physics from Stanford University, Shaevitz conducted postdoctoral work as a Miller Research Fellow at the University of California-Berkeley. He has published numerous scientific articles on biophysics in leading scientific journals and has received a number of awards for his research and teaching activities, including being named a Pew Scholar in the Biomedical Sciences and a Sloan Research Fellow. He also has won a National Science Foundation CAREER Award and a Human Frontier in Science Young Investigator Award.

The early career awards, established by President Bill Clinton in 1996, are coordinated by the Office of Science and Technology Policy within the Executive Office of the President. Awardees are selected on the basis of two criteria: pursuit of innovative research at the frontiers of science and technology; and a commitment to community service as demonstrated through scientific leadership, public education or community outreach. Winning scientists and engineers receive up to a five-year research grant to further their study in support of critical government missions.

The awards, government officials said, also embody the high priority the president's administration places on producing outstanding scientists and engineers to advance the nation's goals and contribute to all sectors of the economy. Ten federal departments and agencies join together annually to nominate the most meritorious young scientists and engineers -- researchers whose early accomplishments show the greatest promise for strengthening America's leadership in science and technology and contributing to the awarding agencies' missions.