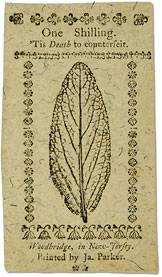 An exhibition showcasing paper money as works of art is on view at Princeton's Firestone Library through Sunday, Jan. 2. The exhibition features currency from the University's Numismatic Collection, including examples from the American Colonies, which were the home of the earliest regular issues of paper money. This image shows the back of a one-shilling note from New Jersey from 1763.

An effort to thwart currency counterfeiters in America's Colonial period spawned an outlet for creative expression that remains vibrant to this day: money as art.

Because British Colonial policies resulted in a dearth of circulating coins, the American Colonies were the home of the earliest regular issues of paper money. Illustration was applied to Colonial currency as an anti-counterfeiting device, as well as for aesthetic purposes. The trend has continued for more than two centuries around the world. 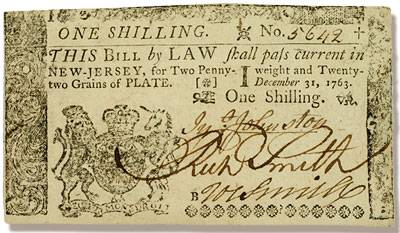 The 1763 shilling note, shown here from the front, is an example of how illustration was applied to Colonial currency both for anti-counterfeiting and aesthetic purposes.

"Paper money as a form of art might seem the makings of a rather small exhibit, to judge from the modern bills of the United States and Europe. Bank notes, however, have constituted one of the dominant forms of visual communication for the past two centuries, and in many cases can be seen as works of art in their own right," said Alan Stahl, Princeton's curator of numismatics.

One of the highlights of the exhibition is the first public display of the recently discovered bank note engraving of a grouse by John James Audubon, the famed wildlife illustrator's first published work.

In the American Colonies, the most inventive printer of paper money was Benjamin Franklin, who devised a system of transferring the vein patterns of tree leaves to printing plates to foil counterfeiters. The Princeton exhibition includes a large selection of Franklin's nature-print notes, as well as issues of Paul Revere and the South Carolina engraver Thomas Coram.

American painter Asher B. Durand became a major figure in bank note art in 19th-century America. This note from 1829, with images of George Washington and the mythological figure Hebe, is one of a set of six printed by the National Bank Note Company in New York and later smuggled into the Confederacy in 1861.

The American painter Asher B. Durand also was a major figure in the development of bank note art in America. Along with his brother Cyrus, who invented a highly decorative series of anti-counterfeiting devices, Durand developed a classical, patriotic approach to bank note design that dominated the medium for the first half of the 19th century.

A section of the Princeton exhibition explores the divergence of imagery on the bank notes of Northern and Southern issuers before and during the Civil War. The display includes a set of six notes printed by the National Bank Note Company in New York and smuggled into the Confederacy in 1861 for distribution as notes of Montgomery, Ala., and Richmond, Va. The American section of the exhibition also features the Educational Series of 1896, designed and engraved by some of the most important illustrators of the day.

The exhibition highlights imagery on the bank notes of Northern and Southern issuers before and during the Civil War. This Confederate note from 1861 bears the images of former U.S. President Andrew Jackson (right) and his vice president, John C. Calhoun (left), two revered Southerners.

The stagnation of American paper money design in the 20th and 21st centuries is put into relief by comparison with some creative examples of European notes, on loan for the exhibition from the collection of Onyshkevych, a 1983 Princeton graduate. Alfons Mucha, the popular creator of poster art, designed paper money for Czechoslovakia in the 1920s that epitomizes the glory of art nouveau design. Other important artists of the period, such as Emile Vloors in Belgium and Eliel Saarinen in Finland, put their stamp on the currency of the period.

In the second half of the 20th century, R.D.E. Oxenaar and J.T.G. Drupsteen created a distinctive look for the bank notes of the Netherlands. In the era since the euro was adopted as currency throughout many European countries, Switzerland has kept the innovative look of its paper money with the computer-enhanced colorful notes designed by Jörg Zintzmeyer, while the Faroe Islands, a Danish territory, have issued a series of simple, evocative notes based on the watercolors of Zacharias Heinesen. 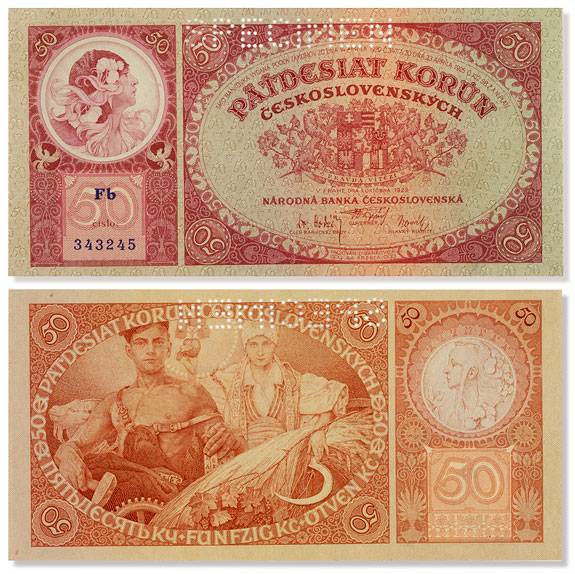 Examples of European notes in the exhibition include paper money designed for Czechoslovakia in the 1920s by Alfons Mucha, the popular creator of poster art. The note from 1929 is shown from the front (above) and the back (below).