Research based at Princeton University has revealed that newly fertilized cells only narrowly avoid degenerating into fatal chaos. At the same time, scientists have discovered that embryos have acquired a mechanism to contain this dangerous instability, a finding that could help biologists unravel other mysteries about the first hours of life.

A team led by Princeton Professor of Molecular Biology Ned Wingreen reported recently in the journal PLoS Computational Biology that contrary to the idea that embryonic cells develop in natural synchrony, they are prone to descend into disarray. Without stabilization, cells develop on different schedules, and many stop developing altogether, which threatens the embryo's survival.

This lurking state of disorder was revealed through computational models the researchers constructed of the embryo cell cycle. The cell cycle is the repeated division and duplication of cells that transforms a single fertilized egg into a full-grown organism. Scientists already knew that embryonic cell cycles are initiated by a swift wave of calcium that emanates from the fertilization site and prompts the embryo's cells to divide and duplicate -- or oscillate, in biological terms.

Researchers led by Princeton molecular biologist Ned Wingreen have discovered that newly fertilized cells narrowly avoid falling into chaos. In simulating the division and duplication of embryonic cells, known as oscillation, the team found that this process is regulated by a wave of calcium that emanates from the fertilization site. In this simulation, a fast calcium wave sweeps across an embryo at a speed of 1 millimeter per four minutes. With cell-cycle oscillation synchronized by this speedy calcium wave, the embryo divides evenly and roughly every 40 minutes. (Image by K.C. Huang)

A natural assumption among scientists had been that once initiated, the impulse to oscillate would ripple across the embryo -- which begins as one big cell that then divides repeatedly -- and set the stage for multiple rounds of cell division to occur in sync. Wingreen and his colleagues found, however, that the natural spread of oscillation is unstable and would result in an erratic patchwork of missed and incomplete cell divisions. They predicted that cell activity instead has to be triggered throughout the embryo at almost exactly the same time.

The researchers' simulation produced the first indication that the fast-moving calcium wave known to spark cell division doubles as a synchronizer that sets cells to the same developmental timetable. The finding revealed a crucial role for the somewhat puzzling existence of the calcium wave, as well as a new level of sophistication in how embryos function.

"We didn't have to go searching for chaos, it just came right out at us," Wingreen said. "When the dust settled, it became clear that cell-cycle oscillation, while remarkably uniform in the end, does not come by that harmony on its own, especially not in anything as big as an embryo, which is much larger than a typical cell. But then the question became, if there's this potential for chaos, how does the system avoid it? It turns out that the system needs the calcium wave to avoid chaos and that wave is activated surprisingly fast."

The embryo's need for stabilization and the dual role of the calcium wave illuminates the intricacy of developing embryos, as well as the impressive ability of embryos to prevent their own destruction, said James Ferrell, a Stanford University professor of chemical and systems biology. The Princeton researchers based their work on formulas that Ferrell developed from experiments on African clawed frog embryos that describe how embryos divide and replicate in timed cycles during early development.

"One of this group's conclusions is that chaos lurks not far from where the system normally functions, like a monster in the corner, and that it matters to have synchronicity established quickly to prevent it. That's not something we had initially thought about," said Ferrell, who had no involvement in the Princeton-led research, but is interested in testing the results experimentally.

"They present a nice story of how evolution has come up with a way to do things as fast as is needed to avoid chaos, but not too much faster. It's deepened our appreciation of what is happening in the biological system, and is a good example of how theory and careful modeling can reveal functions that might not appear in experiments." 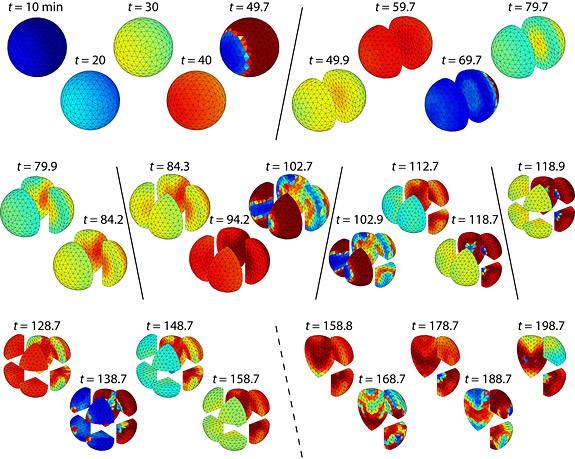 When slowed to travel one millimeter in 10 minutes, the calcium wave does not synchronize cell activity fast enough to prevent chaos. Cell division becomes uneven around 100 minutes and, approaching 200 minutes since fertilization, stops altogether in some cells. (Image by K.C. Huang)

Wingreen, a theoretical biologist and associate director of Princeton's Lewis-Sigler Institute for Integrative Genomics, initiated the project when he noticed that existing cell-cycle formulas and models such as Ferrell's did not explain how embryos keep cell activity synchronized across their considerable girth. Embryos are huge, about 10 to 100 times larger than a normal cell, he said, and at that size oscillation would not necessarily fan out from the point of fertilization, as was assumed. Instead, the process would be vulnerable to any bump in the cellular road and would splinter into patches of disarray, he said.

In theory, chaos could be avoided if oscillation spread quickly enough, Wingreen said. But the cell cycle is driven by an intricate exchange of proteins with its own schedule. Wingreen doubted that this activity could spread itself across an expansive embryo fast enough, especially as the embryo grows. He wanted to take the embryo's size into account as a factor in the spread of cell activity, which no published cell-cycle models had considered.

Wingreen and the paper's lead author, Scott McIsaac, a doctoral student in Princeton's Lewis-Sigler Institute, altered Ferrell's cell-cycle equations so that oscillation would spread across the expanse of an embryo. They worked with co-author K.C. Huang, a Stanford assistant professor of bioengineering, to solve the revised formulas in a three-dimensional model. Co-author Anirvan Sengupta, a professor of physics and astronomy at Rutgers University, characterized and analyzed the various instabilities that might occur as the simulated embryonic cells divided.

"We had no clear idea of what adding a spatial element would produce," Wingreen said. "I was interested if there was an inhomogeneous element to cell-cycle oscillation, if the cells in fact did not all act in unison. My training is in physics, and I know that whenever you add a new dimension, interesting things can happen. I had a feeling something would happen if we ran these formulas in a spatially extended system."

The initial simulation tested how cell activity would spread through the embryo solely by diffusion. Oscillation indeed found its way across the cell, but disorder took root almost instantly. Cells divided at different speeds, with many left undeveloped by the end of the cycle. As the simulation went on for 200 minutes, the mayhem grew worse. A real embryo would not survive this breakdown, or would at least be left with severe developmental problems, Wingreen said.

Wingreen and McIsaac began to suspect that the calcium wave had a role in keeping the cellular peace. Although known to spark cell cycles, the full purpose of the calcium wave had previously had some shadow of mystery, Wingreen said. But once the team ruled out that cell activity could self-regulate, they knew something else brought order to the developing embryo. The calcium wave -- which spreads across the embryo rapidly following fertilization -- seemed a likely candidate.

If the calcium wave doubles as a regulator, then it could have other functions. Moreover, other mechanisms that seemingly serve one purpose may also have others. These possible extra duties could be behind other happenings in embryo cells that are not well understood, said Eric Wieschaus, the Squibb Professor of Molecular Biology at Princeton and a 1995 Nobel Prize winner.

"The fact that the system generally doesn’t devolve into chaos might mean that embryos have developed additional mechanisms that we don't know about. It would be interesting to know what those mechanisms are," Wieschaus said.

"From my own standpoint, the paper makes me want to check back through mutant lines that disrupt development and have never been fully described or understood, but might be affected in this process. This model gives a sense of what to look for, and that is always valuable."

Just as the experiment-based models developed by Stanford's Ferrell fueled Wingreen's work, Wingreen hopes his models can guide further study of embryo development in the laboratory. He said the next steps are to reproduce the simulations in actual embryos, and to test the limits of calcium-wave synchronization to learn if it holds up when development on one side of an embryo is slowed, or if the two halves of a split embryo would remain coordinated.

"These are all experimental steps," Wingreen said. "My group does theory and modeling, so our hope is that we've put the ball back in the experimentalists' court."

The research, reported in the July issue of PLoS Computational Biology, was funded by grants from the National Science Foundation and the National Institutes of Health.