In an irony of nature, invasive species can become essential to the very ecosystems threatened by their presence, according to a recent discovery that could change how scientists and governments approach the restoration of natural spaces.

Princeton University researchers report this month in the journal Proceedings of the Royal Society B evidence that destructive, non-native animals that have been deservedly maligned by conservationists the world over can take on important biological roles — such as flower pollination — once held by the species the interlopers helped eliminate.

As a result, campaigns to curb invasive animal populations should include efforts to understand the role of the invasive species in question and, if necessary, reintroduce missing native animals, explained co-author David Wilcove, a Princeton professor of ecology and evolutionary biology and public affairs. Otherwise, without either native or foreign species to complete crucial tasks such as pollination, plants and animals — particularly already pressured native species — could suffer further, he said.

Wilcove worked with lead author David Pattemore, who received his Ph.D. from Princeton in 2011, to observe the pollination of three indigenous plant species in New Zealand. Initially, the researchers sought to document the plants' health on New Zealand's North Island, an environment where native vertebrate pollinator species have largely vanished. They wanted to compare the plants' survival to that of the same species in an island nature reserve off the North Island coast where all the native vertebrates still occur. They instead found that invasive pests such as ship rats, introduced to New Zealand by Europeans, were just as instrumental in pollination on the North Island as endemic birds and bats were in the nature preserve. 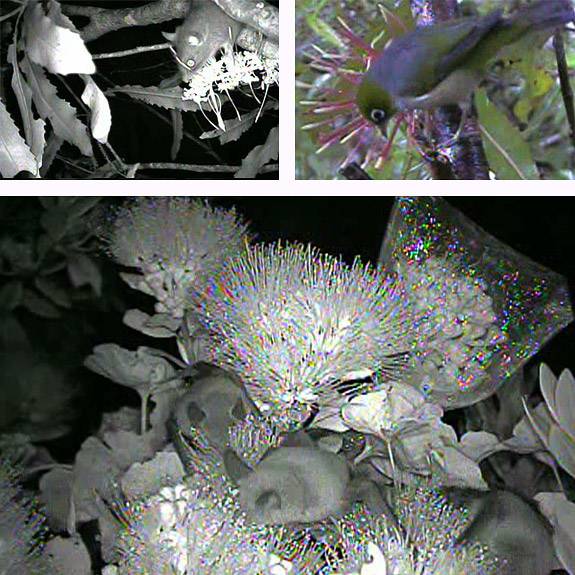 Princeton researchers found that invasive species can take on important biological roles — such as pollination — in the very ecosystems threatened by them. The researchers compared the survival of three native plant species in New Zealand, both in an environment where endemic pollinators had all but vanished and in a nature preserve where native vertebrates still occur. They found that invasive and non-native species such as the ship rat (top left) and the silvereye (top right) were just as important to the health of native plants as endemic pollinators such as the short-tailed bat (bottom). (Images by David Pattemore)

"Given the rate at which human activities are driving species to extinction, there is a critically important question about what happens to crucial ecosystem functions such as pollination as the creatures that carry them out disappear. Strangely, it is a question that remains largely unanswered.

"David Pattemore and I found a rare opportunity in New Zealand to address this quandary as it applies to pollination. On the country's North Island, virtually all of the endemic birds, bats and other vertebrates have disappeared since Europeans arrived, due to habitat destruction and the spread of harmful, invasive species such as ship rats. But there is a nature reserve known as Little Barrier Island off the east coast of the North Island where all of the endemic vertebrates still thrive. We were able to directly compare how indigenous plant species fared in an ecosystem nearly devoid of native vertebrate pollinators to how they fared in an environment where those animals still live.

"We observed the pollination of three species of flowering plants in both locations: the Pōhutukawa evergreen tree (Metrosideros excelsa); the New Zealand honeysuckle tree (Knightia excelsa); and Veronica macrocarpa, a type of flowering plant. On both islands, birds and bats were excluded from some flowers using wire-mesh cages, while other flowers were left open to them, so we could better capture the effect of the pollinators on flower health. We used video cameras to record more than 1,200 hours of footage of the flowers and the animals that visited them night and day.

The researchers used video cameras to record more than 1,200 hours of footage of the flowers and the animals that visited them night and day. Video from the North Island of New Zealand, where endemic pollinators have largely disappeared, shows that flowers rely on the activity of non-native silvereye songbirds and invasive ship rats for pollination. In many cases, destructive animals such as the ship rat are responsible for the elimination of the species whose biological function they have taken on. (Video courtesy of David Pattemore)

"As we expected, native vertebrates were indeed critically important for pollinating flowers on Little Barrier Island; flowers that were caged to prevent birds and bats from reaching them showed poor pollination success. To our surprise, however, we found a similar result on the North Island. Excluding vertebrates from flowers resulted in reduced pollination success, yet these North Island sites had virtually no native vertebrates.

"We wondered what was pollinating these plants. Our video footage revealed that these plants relied on the activity of the invasive ship rat and the non-native silvereye — a small songbird that colonized New Zealand less than 200 years ago and could not have co-evolved with New Zealand's endemic plants. These foreign species performed some of the same functions as the locally extinct native pollinators and, in the case of the New Zealand honeysuckle and Veronica macrocarpa, the rats and silvereyes provided pollination services as good or better than the endemic vertebrates.

"Ironically, ship rats are believed to be a major cause of the loss of New Zealand's native vertebrates. So, essentially the killer stepped in to do the job of its victim.

"We believe our results apply to other parts of the world and should cause conservationists and governments to rethink current approaches to containing invasive species. Invaders like the ship rat undoubtedly inflict great harm on native species, and there is no question that efforts to control their proliferation must continue. But David Pattemore and I show that these campaigns should now consider the roles these alien species may now play in ecosystems.

"We suggest that efforts to control seemingly harmful pests must go hand-in-hand with efforts to restore missing native species so that important ecological functions are maintained. In the case of North Island, eliminating ship rats without also reintroducing endemic birds and bats could be detrimental to native plants. And if those plants decline, then the other species that depend on them surely will, too.

"In other words, our findings show that eliminating an invasive species for the benefit of native species could actually harm an ecosystem, a surprising dynamic that could frustrate ecosystem restoration efforts."

Video footage of Pattemore explaining more about the specific animals and sites studied in the project is available from the New Zealand Institute for Plant and Food Research.

This research appeared Nov. 16 in the journal Proceedings of the Royal Society B, and was supported by grants from the High Meadows Foundation, the Todd Foundation, the Auckland Regional Council and Princeton University.

Wilcove is available to discuss his research with interested members of the news media and can be contacted at 609-258-7118, dwilcove@princeton.edu, or through Princeton University science writer Morgan Kelly at 609-258-5729, or mgnkelly@princeton.edu.