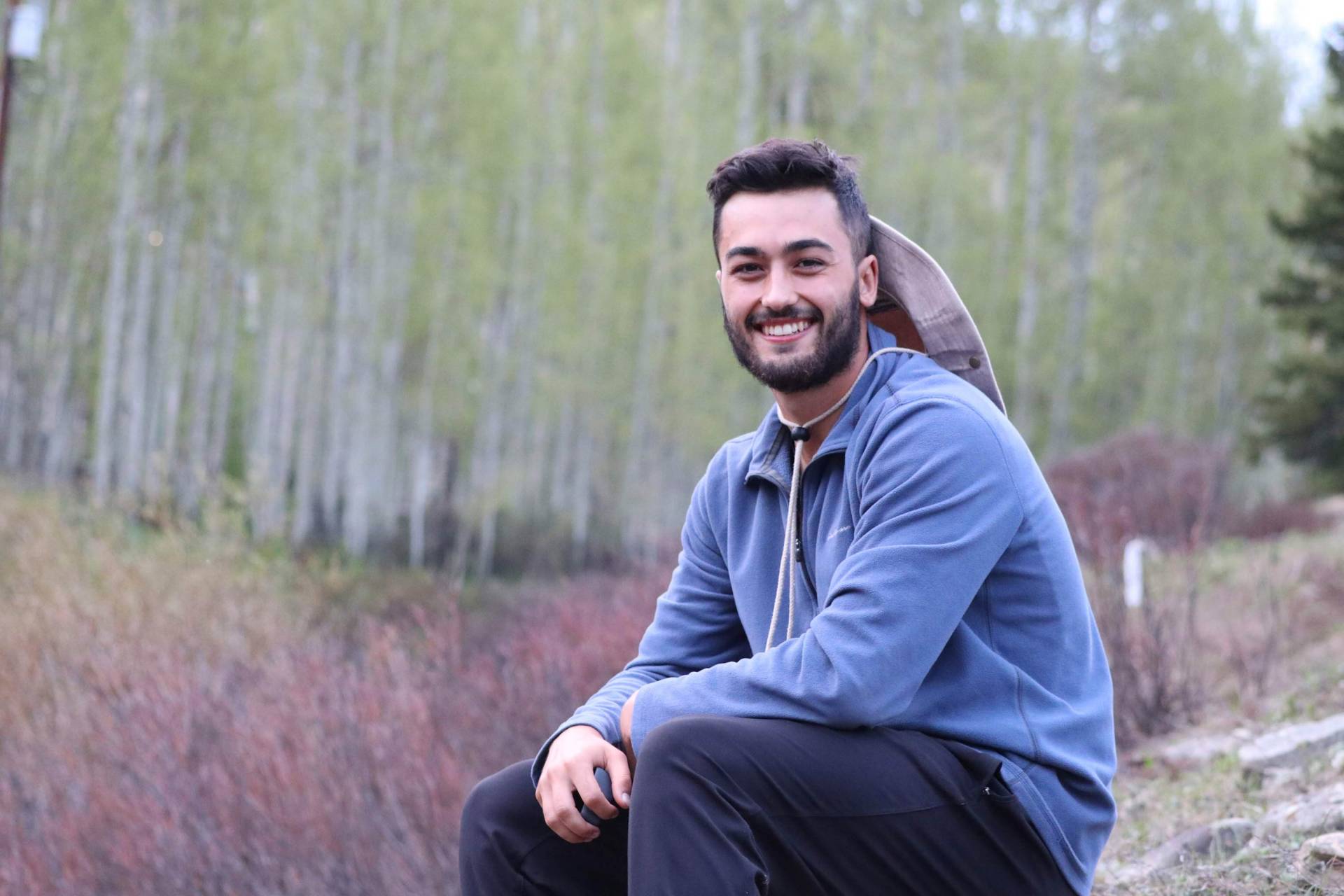 Princeton senior Cole Morokhovich still marvels at the possibility that his academic path may have come down to one five-minute window. Having come to Princeton with a focus on pre-medicine, he had taken most of the required courses and declared his major in chemical and biological engineering.

Then, in the spring of his sophomore year — after his interest in studying the environment had been piqued by the course, “Life on Earth: Chaos and Clockwork in Nature” — a friend told Morokhovich about a Princeton Environmental Institute summer internship at the Rocky Mountain Biological Laboratory (RMBL) in Colorado with Mary Caswell Stoddard, an assistant professor of ecology and evolutionary biology.

Rushing to her office the day applications were due, Morokhovich caught Stoddard during a short break she had between meetings. He expressed his interest in working with her during the summer on her new project — supported by a PEI Climate and Energy Challenge award — studying the effects of climate change on the behavior of broad-tailed hummingbirds in the Rocky Mountains. 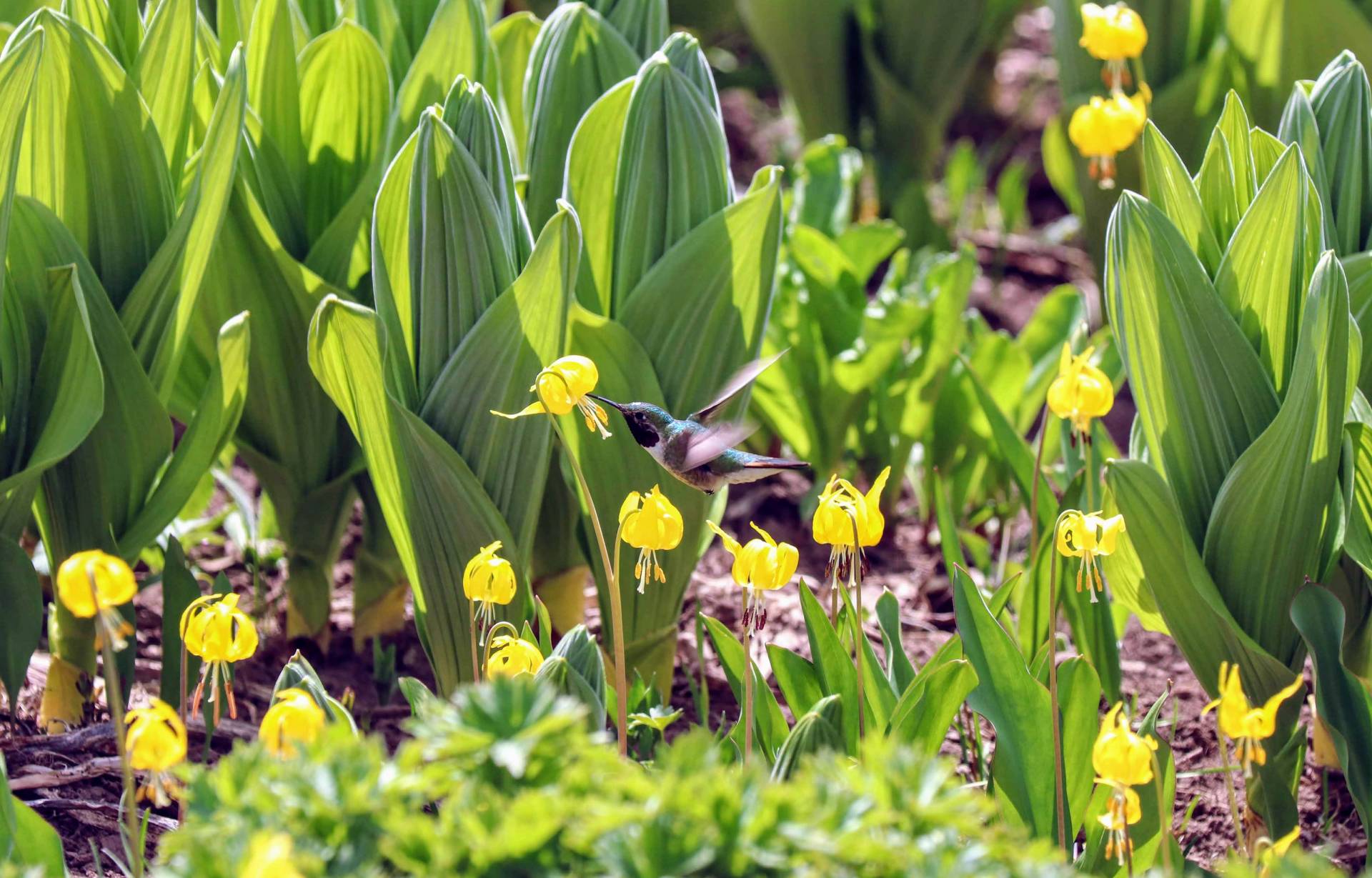 For his senior thesis research, Morokhovich worked to identify the flowers broad-tailed hummingbirds prefer and why. He observed and recorded the flowers hummingbirds visited, and set up cameras that captured the visible and ultraviolet color spectrum of the blooms they favored.

Photo by Cole Morokhovich, Department of Ecology and Evolutionary Biology

“That internship changed my life,” said Morokhovich, who will graduate from Princeton this semester with a bachelor’s degree in ecology and evolutionary biology. “I loved being outdoors and it felt right. It was always exciting and fun, even though it was a lot of work. Five minutes later and who knows if I could have even applied. I could be writing my MCATs right now. It’s funny how things work out.”

In the two years since, Morokhovich expanded that summer internship into his senior thesis research, returning to Colorado in summer 2019 with support from the PEI Environmental Scholars program. His research has focused on how climate change may be affecting the bloom cycle of flowers that broad-tailed hummingbirds depend on for food. Morokhovich worked to identify the flowers broad-tailed hummingbirds prefer and why. Once that is known, he said, researchers can study the effect of climate change on the abundance of those plants to project how the birds might fare on a changed planet.

Hummingbirds have rather precise migratory and breeding patterns that align with the availability of particular flowers, especially those that bloom in early spring. Yet, early spring is a transitional time that climate change is causing to be more erratic.

“There’s starting to be asymmetry between when flowers are blooming and the frequency with which hummingbirds are visiting,” Morokhovich said. During his first summer in the Rocky Mountains, for instance, there was no snow. For his second visit, it snowed heavily in July, resulting in heavy competition among broad-tailed hummingbirds to feed from the few flowers available, Morokhovich said.

If such swings become commonplace from year to year, the hummingbirds stand to lose the reliable source of food that sets their schedule for mating and migrating — and that area of the Rocky Mountains could lose the hummingbirds.

“The birds may move to lower elevations where the snow melts earlier, or to places where there’s not enough food for breeding purposes,” Morokhovich said. “A third option is that they change food sources, which poses problems on its own — they’ll spend more time foraging for a new food source than on courtship. None of the options are mutually exclusive.”

“At our field site, many wildflowers are blooming earlier than they did just 40 years ago,” she said. “We are focused on one hummingbird species, but the questions we are exploring apply to a broad range of avian and insect pollinators. Understanding how these interactions work is vital for predicting how they might change in the future.” 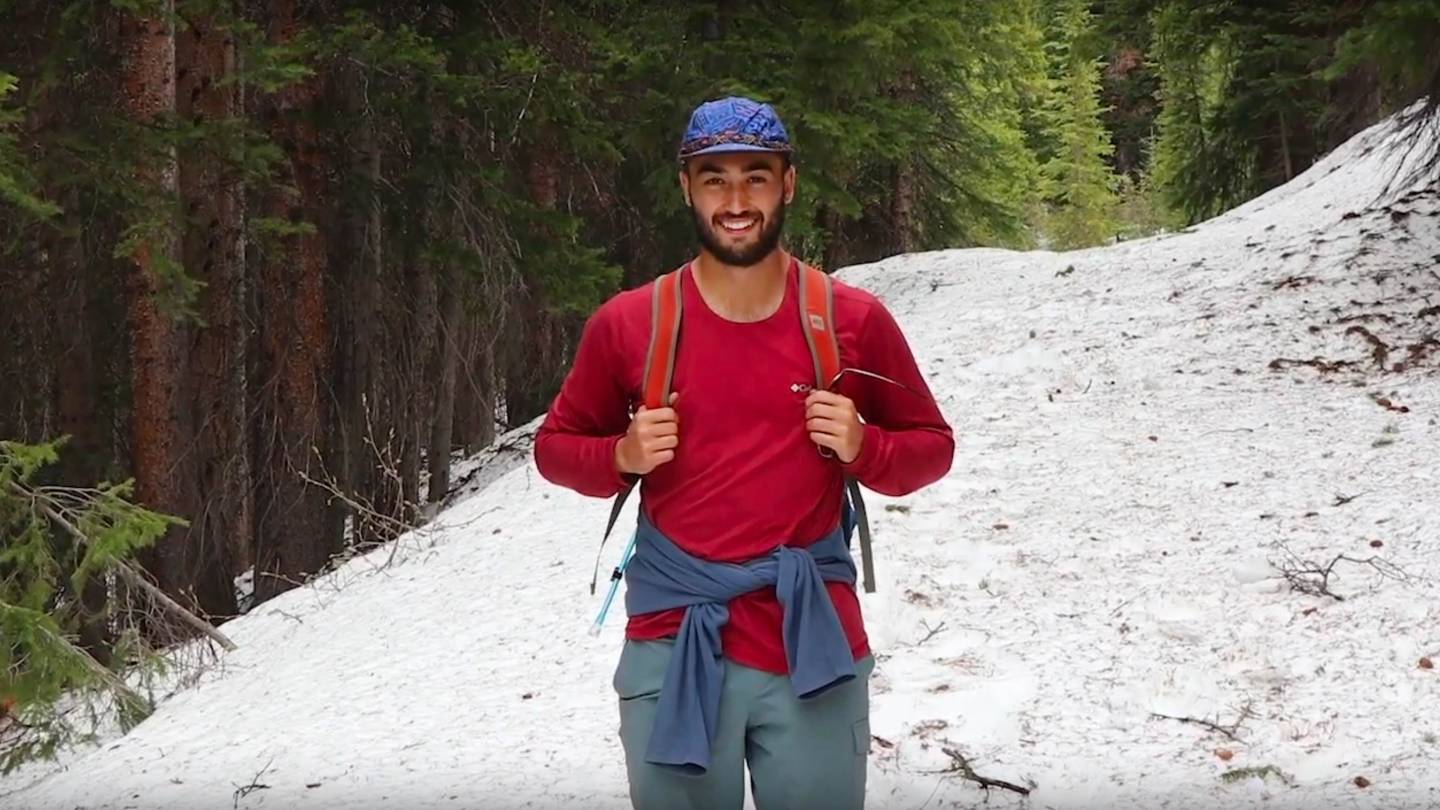 Cole came to Princeton as a pre-med student, but his pursuit of ecology and environmental biology was solidified by a PEI summer internship studying the effects of climate change on broad-tailed hummingbird behavior at the Rocky Mountain Biological Laboratory with Princeton professor Mary Caswell Stoddard. He parlayed his diligent and innovative fieldwork into his Princeton senior thesis research with support from the PEI Smith-Newton Environmental Scholars program and established a new project in the Stoddard Lab.

For their work at RMBL, the Stoddard Lab takes a big data approach that uses time-lapse cameras and machine learning to characterize the foraging behavior of broad-tailed hummingbirds throughout the summer breeding season.

Morokhovich spent 10 hours each day carefully observing hummingbird activity and tracking the flowers they visited to note any change in behavior. At the same time, he set up cameras that captured the color spectrum of flowers that the birds visited. Hummingbirds can see in the ultraviolet (UV) spectrum, meaning that the flowers they prefer could have appealing traits or patterns that are visible in UV but invisible to the human eye.

In addition to his fieldwork, Morokhovich dove into optimal foraging theory through his own research and by talking to the many biologists at RMBL, including Princeton postdoctoral researcher Ben Hogan in the Stoddard Lab. This model of behavioral ecology contends that animals select food sources that supply the most energy for the time and energy spent on finding that source. Morokhovich studied the amount of nectar in flowers that he grew on-site, then compared those data to his field observations of which flowers broad-tailed hummingbirds visited most often. He ultimately focused his efforts on a small purple flower known as Nuttall’s larkspur (Delphinium nuttallianum), a broad-tailed hummingbird favorite.

As a researcher, Morokhovich exhibited resolve, flexibility and creativity while performing painstaking research in an unpredictable environment at an elevation of 10,000 feet, Stoddard said. The 2019 season was one of the coldest and wettest in decades, she said.

“Cole was very independent as he developed this project, which required not only careful planning and hours and hours of observation, but also a bit of a green thumb in terms of keeping potted larkspur plants alive and healthy,” Stoddard said.

“His energy and passion for this project were evident from the start,” she continued. “He quickly learned to identify alpine flora, becoming our group’s in-house flower expert. He developed a strong intuition about where to locate flower species of interest and how best to deploy an array of small cameras to catch hummingbirds in the act of foraging. Cole has been an extremely valuable member of my group these past two years.” 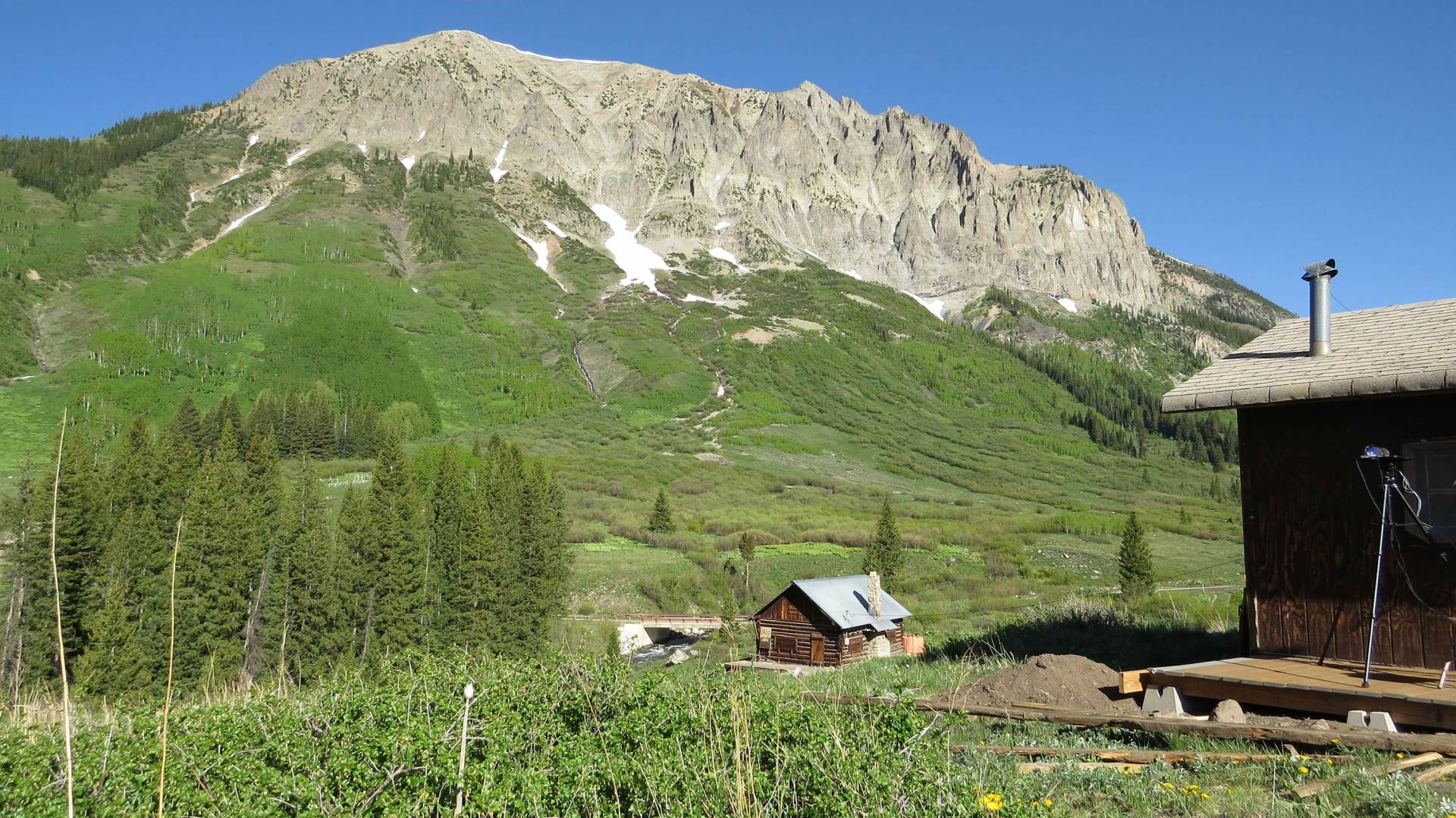 Cole conducted field work in the Rocky Mountains of Colorado on two occasions while a Princeton student.

Photo by Cole Morokhovich, Department of Ecology and Evolutionary Biology

The work Morokhovich started will be continued by Princeton junior Alice Egar, who worked with him at RMBL as a 2019 PEI summer intern observing hummingbirds. In the meantime, he’s found that broad-tailed hummingbirds provide an unexpected avenue to informing people about the imminent consequences of climate change.

“It’s been a great way to talk about climate change because people who may not have cared about it are interested when I mention my research,” Morokhovich said.

“Almost everyone I’ve talked to about birds has a hummingbird story and they want to hear about my work with them,” he said. “It’s interesting to me that these fascinating little birds are allowing me to talk to people about climate change.

“And maybe that makes those people a little more aware,” he said, “a bit more likely to do their part to help save the planet and these birds.”