When it comes to flirting, animals know how to put on a show. In the bird world, males often go to great lengths to attract female attention, like peacocks shaking their tail feathers and manakins performing complex dance moves. These behaviors often stimulate multiple senses, making them hard for biologists to quantify.

Hummingbirds are no exception when it comes to snazzy performances, as males of many species perform spectacular courtship dives. Broad-tailed hummingbirds (Selasphorus platycercus) fly up to 100 feet in the air before sweeping down toward a perched female, then climb back up for a subsequent dive in the opposite direction. At the Rocky Mountain Biological Laboratory in Gothic, Colorado, home to a population of breeding broad-tailed hummingbirds, researchers from Princeton University have been investigating how hummingbirds combine speed, sound and color in their displays. Their work appears in the Dec. 18 issue of the journal Nature Communications.

“The dives are truly amazing feats for such small birds,” said Benedict Hogan, a postdoctoral research associate in ecology and evolutionary biology and the study’s lead author. “We know from previous work that the males can reach really high speeds. They combine that speed with intriguing noises generated by their wing and tail feathers, and of course with their brightly iridescent plumage.” But how do these different components fit together, and what might a dive sound like and look like to a female? 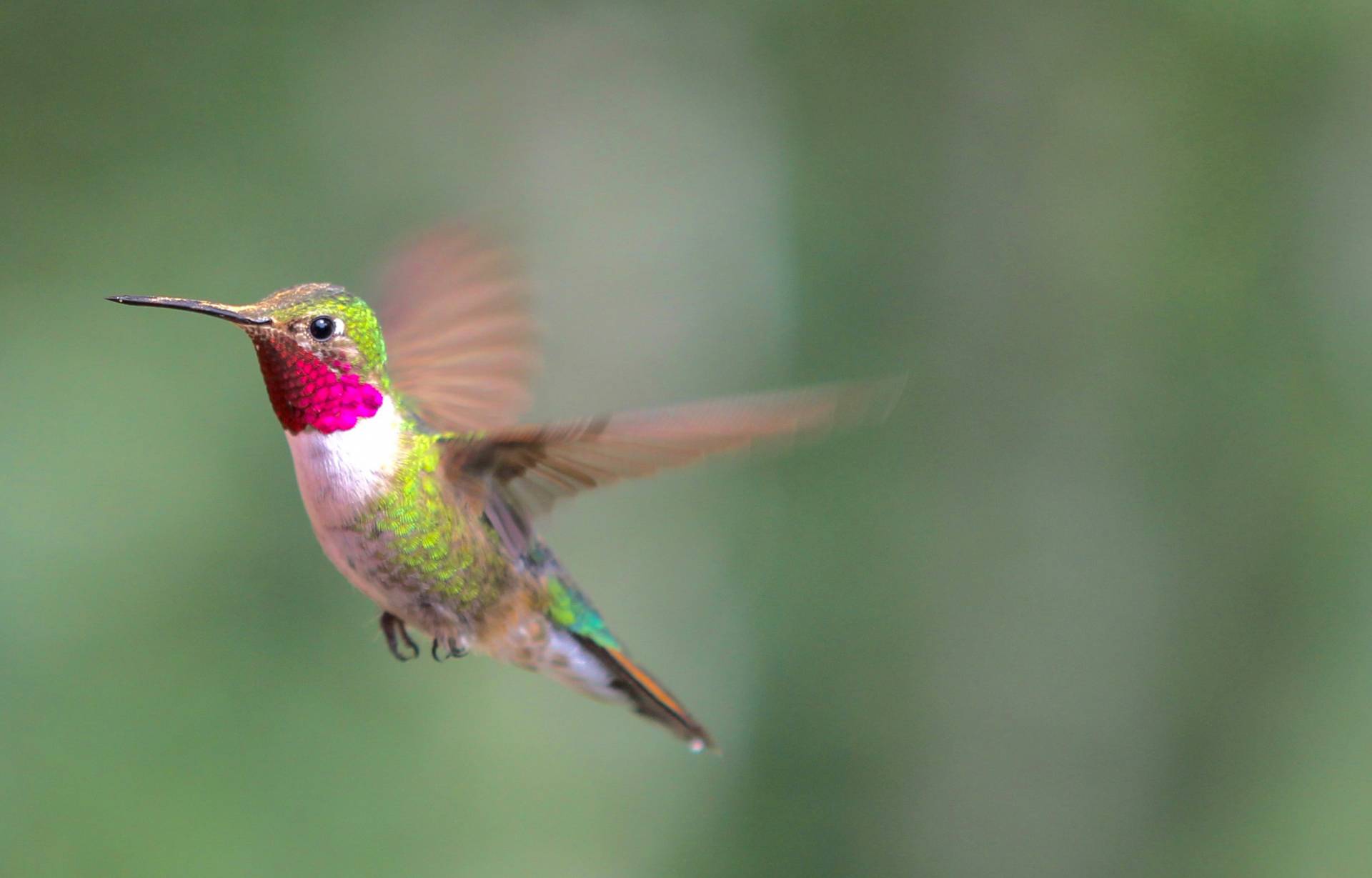 To explore this, Hogan and Mary Caswell Stoddard, an assistant professor of ecology and evolutionary biology and the study’s senior author, created video and audio recordings of 48 dives performed by wild male broad-tailed hummingbirds. They then used image-tracking software to estimate each male’s trajectory and speed throughout the dive. Combining these estimates with the audio data, the researchers measured the precise time at which the males produce a mechanical “buzz” with their tail feathers.

To incorporate information about iridescent plumage color, which is difficult to extract from the video recordings, the team headed to the American Museum of Natural History in New York City. Using a multi-angle imaging technique and an ultraviolet-sensitive camera, they photographed broad-tailed hummingbird specimens. Hummingbirds are tetrachromatic — their eyes have four color cones, one of which is sensitive to ultraviolet wavelengths — so by combining the photographs with a model of hummingbird color vision and details of the U-shaped flight path, the researchers were able to estimate a female “bird’s-eye view” of the male’s iridescent throat feathers. 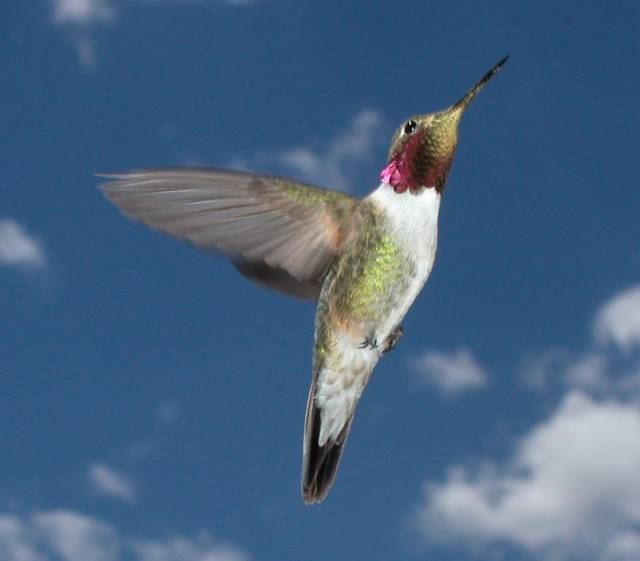 A male broad-tailed hummingbird climbs upward on the final leg of his U-shaped dive past a would-be mate.

Putting it all together, Hogan and Stoddard could determine how the events in a hummingbird’s dive unfold.

“We discovered that the most dramatic aspects of the dive — high speed, the mechanical buzz and a rapid iridescent color change — happen almost all at once, just before the male soars past the female,” said Stoddard. “These aerial acrobats deliver an in-your-face sensory explosion.”

First, the male starts the tail-generated buzz. Then his bright red throat feathers become visible to the female and quickly appear to change to black, due to his speed and orientation. During this time, the male reaches top horizontal speed. Because of his high speed, the researchers estimate that a female will perceive an upward and then downward shift in pitch as he approaches and departs.

“This is due to the Doppler effect, the same phenomenon responsible for the perceived change in pitch as a car with its horn blaring drives past you,” said Hogan.

All of these key events occur in a 300-millisecond window, roughly the duration of a human blink.

How much does the timing matter to females? That needs more study, say the researchers. For now, they can only hypothesize about the different elements of the dive display. The tightly synchronized moves might provide information about the male’s health or tap into a female’s aesthetic preferences. Whatever the explanation, the team emphasized the importance of considering timing and motion in animal courtship signals.

“In the real world, many animals strut their stuff in complex, dynamic ways,” said Stoddard. “Whether it’s a diving hummingbird or a dancing peacock spider, we need to account for motion and orientation to understand how these remarkable displays evolved.” 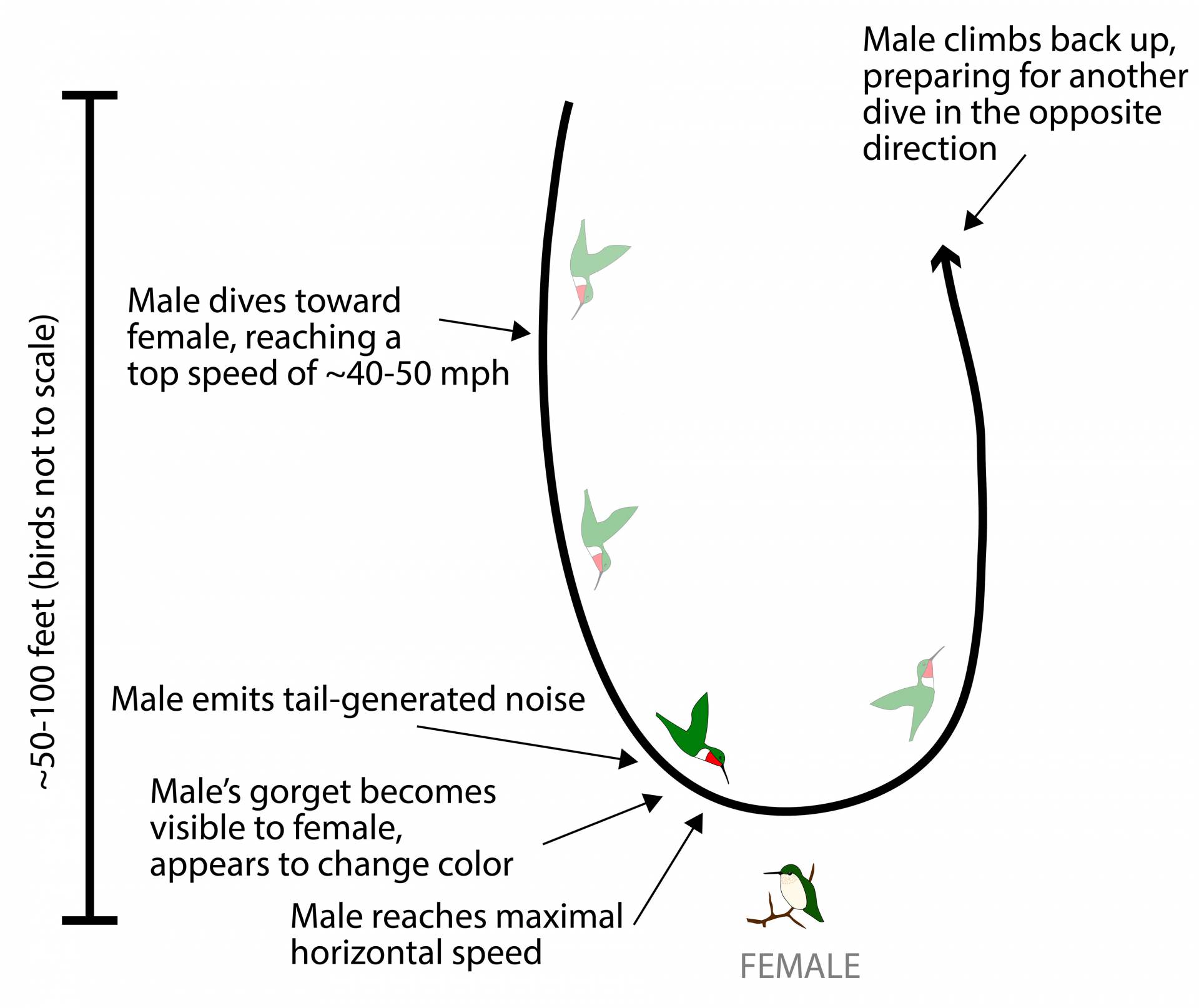 Male broad-tailed hummingbirds closely time key events to produce a burst of signals for the females they are wooing. They synchronize maximal horizontal speed, loud noises generated with their tail feathers, and a display of their iridescent throat patch (gorget), all in a mere 300 milliseconds — roughly the duration of a human blink.

Illustration courtesy of the researchers

“Synchronization of speed, sound and iridescent color in a hummingbird aerial courtship dive,” by Benedict Hogan and Mary Caswell Stoddard, appears in the Dec. 18 issue of Nature Communications (DOI: 10.1038/s41467-018-07562-7). The research was supported by the Princeton Environmental Institute's Climate and Energy Grand Challenges Program and a Sloan Research Fellowship to Stoddard.