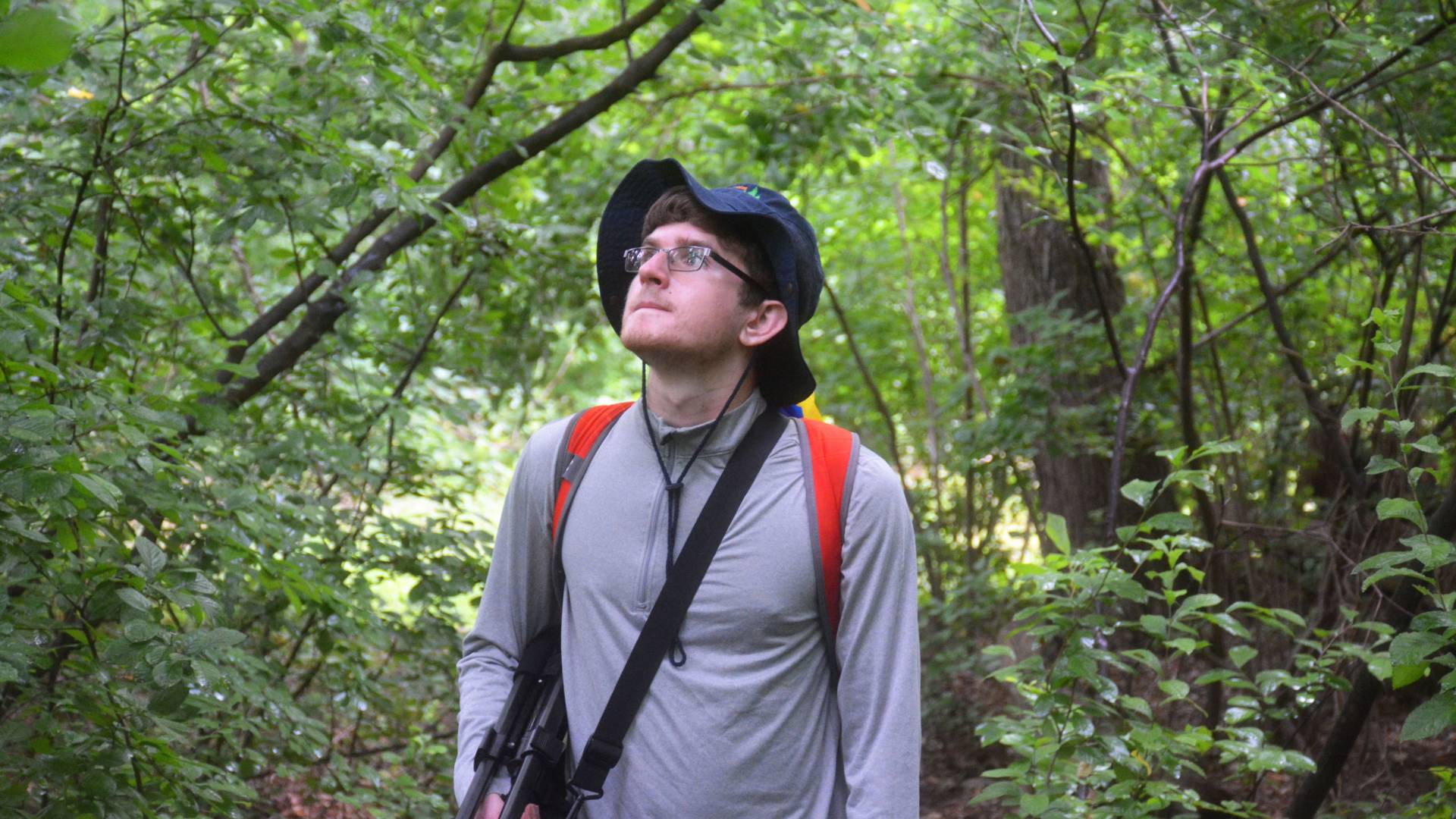 For his senior thesis, Joe Kawalec of the Class of 2021, who graduated Princeton with a bachelor’s degree in ecology and evolutionary biology with a certificate in environmental studies, studied the natural camouflage of downy woodpeckers to understand how it helps the small bird survive in its forest habitat.

In between, he observed patterns in tree bark through the ultraviolet perspective of a bird, dove into the dynamics of animal coloration, and conducted field experiments with replica downy woodpeckers to determine how the birds’ speckled plumage hides it from predators while potentially signaling to other birds. 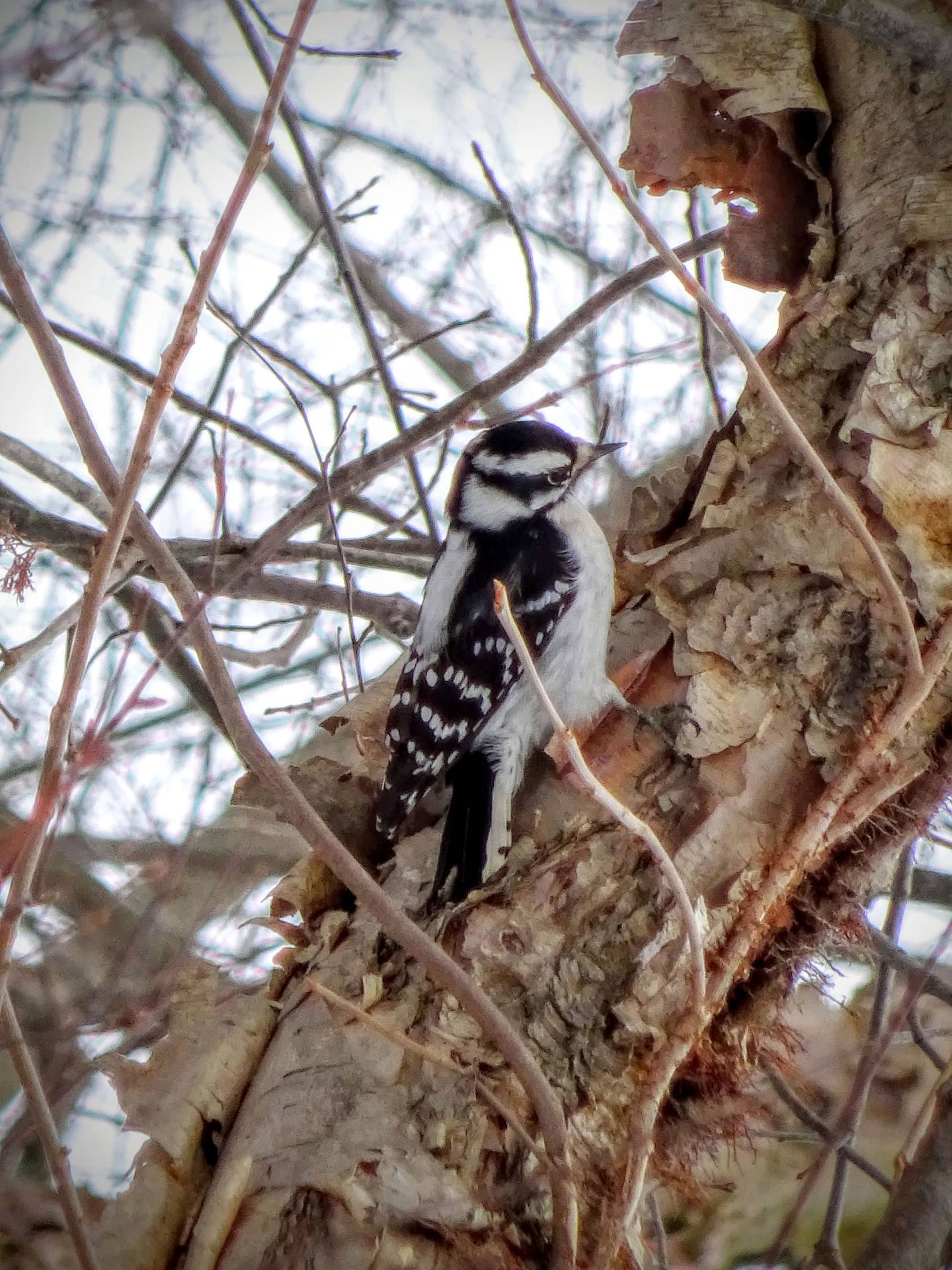 Abundant in North America, downy woodpeckers live in forests increasingly being lost to human activity. Understanding how they have adapted to survive in their ecosystem could help predict how they will respond to deforestation.

“There’s so much diversity in coloration in nature. Each of these patterns and colors have a story behind them,” said Kawalec, whose thesis research was supported by a Becky Colvin Memorial Award from HMEI and the Department of Ecology and Evolutionary Biology.

“Coloration isn’t just important from an aesthetic perspective, but also from an ecological perspective,” he said. “It’s important to understand how these patterns and colors ensure that species can survive and reproduce. If we change the environment beyond what an organism has adapted to, we can end up altering species’ relationships with their ecosystems and possibly their existence.”

Animal coloration runs a gamut of functionality, from how a cheetah’s spots break up the outline of its body as it stalks prey, to how the flash of a white-tailed deer’s hindmost appendage tells predators that it won’t be easy to catch. Found throughout North America, downy woodpeckers have a white back and underbelly with black to brownish-black white-speckled wings (males also have a red patch on the back of their head).

Kawalec wanted to know if and how these plumage patterns help the small bird stay safe in its forest habitat — which may help keep the forest itself alive. “Woodpeckers are especially important as ecosystem engineers. They excavate cavities that are essential habitats for species such as owls and other birds,” he said.

“Knowing how healthy the woodpecker population in an area is provides an indication of how healthy the ecosystem is,” Kawalec said. “By understanding woodpecker coloration, we can better know how they navigate their environment, how they adapted to it, and if they are adapting to changes driven by human activity.”

The path to Kawalec’s senior thesis research began in summer 2019 during an HMEI Environmental Internship in the research group of his adviser, Mary Caswell Stoddard, an assistant professor of ecology and evolutionary biology who focuses her research on avian coloration, ecology, behavior and evolution.

“Joe was already a talented birder with a deep appreciation for natural history, but through the internship — and his thesis work — he developed a keen sense of the scientific process,” Stoddard said.

Kawalec — who co-founded the Princeton Birding Society — grew up birdwatching with his mother and reached out to Stoddard during his sophomore year to ask about research opportunities.

“I was generally interested in birds, and how dynamic coloration arose in each species and what its function and purpose could be,” said Kawalec, who received the T.A. Barron Environmental Leadership Prize from HMEI at the Environmental Studies Class Day event May 24 for his engagement in campus environmental activities and deep interest in local ecosystems and avian biodiversity.

His internship developed from his work with Ph.D. candidate Monica Carlson on one of her projects studying woodpecker behavior in relation to camouflage. Early each morning, he and Carlson would walk the Institute Woods near Princeton’s campus on the lookout for woodpeckers, observing and videoing the birds as they foraged and gauging their level of alertness.

Kawalec would then take close-up photographs of the bark of the trees in which he’d spotted a woodpecker, including with an ultraviolet filter to mimic how birds would see the bark. His objective was to determine if the birds were more at ease on certain trees and if the bark patterns of those trees overlapped with the birds’ coloration in both the visible and ultraviolet spectra. 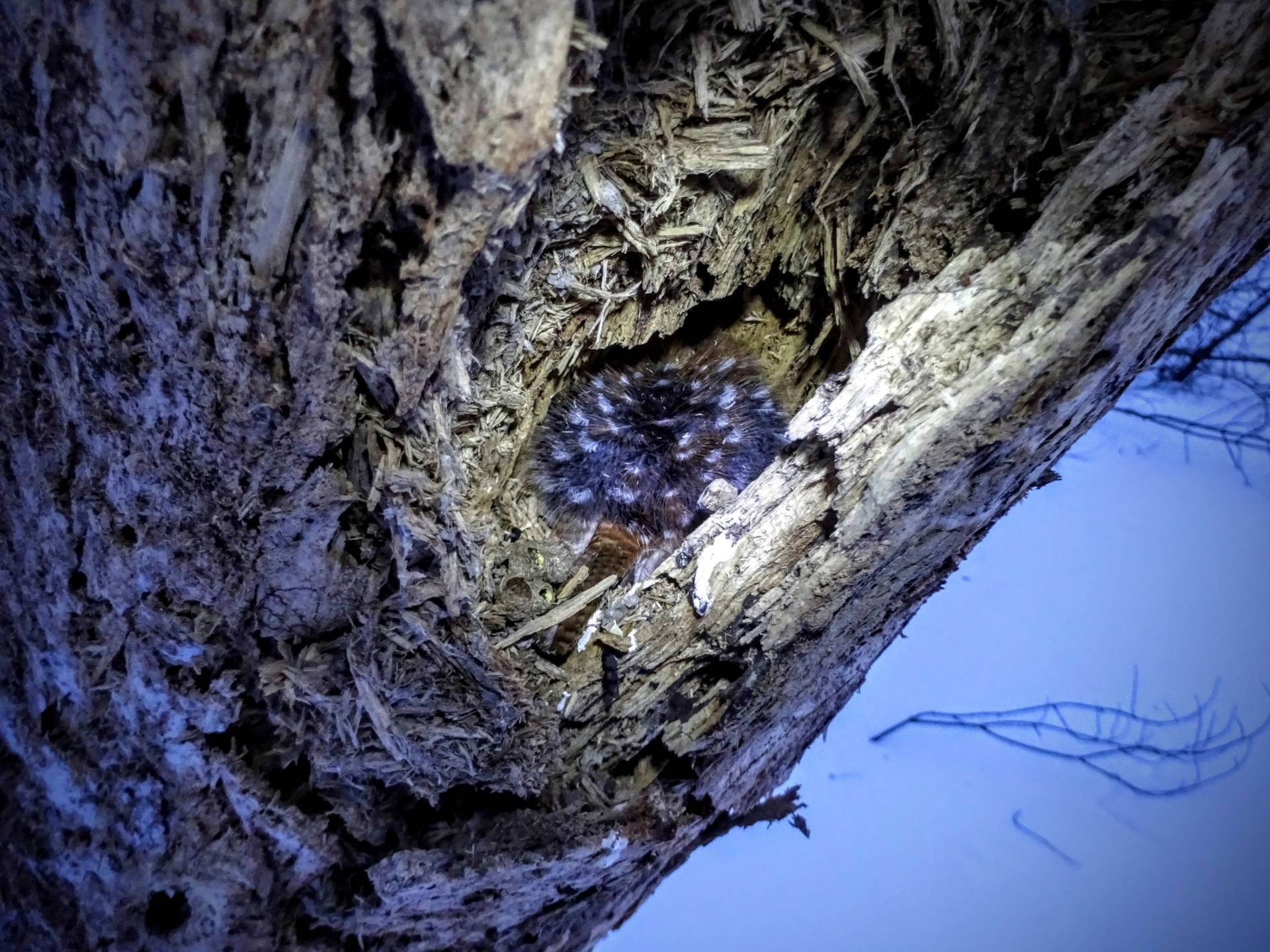 Downy woodpeckers are important ecosystem engineers that excavate cavities for owls and other birds. The strength of their population could be an indicator of local ecosystem health.

“Joe always asked questions to make sure he understood the scientific purpose of what we were doing. On a number of occasions, Joe contributed important observations and insights that led to improvements in data collection and analysis,” Carlson said.

“He also thought deeply about how the research we were doing was related to biodiversity and conservation issues,” she continued. “We often found ourselves talking about the relationship between woodpecker foraging, ash tree decline in New Jersey, and the invasive emerald ash borer. He demonstrates a flexibility, creativity and a desire to learn and grow that I believe will make him a fantastic scientist.”

Building on his internship, Kawalec began to wonder how woodpeckers’ coloring acted as camouflage in their habitat, Stoddard said.

“Joe developed a fascinating thesis project to test the hypothesis that woodpecker plumage has a dual function: Woodpeckers might be conspicuous when viewed up close to warn off potential predators, but camouflaged at a distance to avoid being detected in the first place,” she said.

“Distance-dependent defensive coloration in animals is a pretty new idea, and very little work on it has been done in birds, so Joe’s work could fill an important gap in the literature,” Stoddard said.

For his thesis research on the “cryptic advantage” downy woodpeckers derive from their plumage, Kawalec designed an experiment using fabricated models of female downy woodpeckers. All the models were the same overall color of the real birds (including on the ultraviolet spectrum), but one type had the white stippling on the wings while the other variant did not.

Because campus was closed due to the COVID-19 pandemic this past winter, Kawalec designed his own experiments at home. He used a random-number generator to position his model birds on trees throughout a park in his hometown of East Brunswick, New Jersey. He then had family members look for the woodpecker models and use a range finder to determine their distance from the model when they spotted it.

Kawalec later compared the distances at which his volunteers discovered the speckled and non-speckled models. While there wasn’t a significant difference, his data trended toward the patterned model being more elusive, he said.

Kawalec also photographed the models on the trees to examine how they blended into the tree bark and the “dynamic illumination,” or the patterns that light creates as it shines through the tree canopy. He analyzed his photographs looking for one of two camouflage metrics. The first, disruptive coloration, is when markings such as a cheetah’s spots make an animal harder to detect by hiding its outline. The other, background matching, is when an animal blends into their surroundings, the classic example being chameleons. 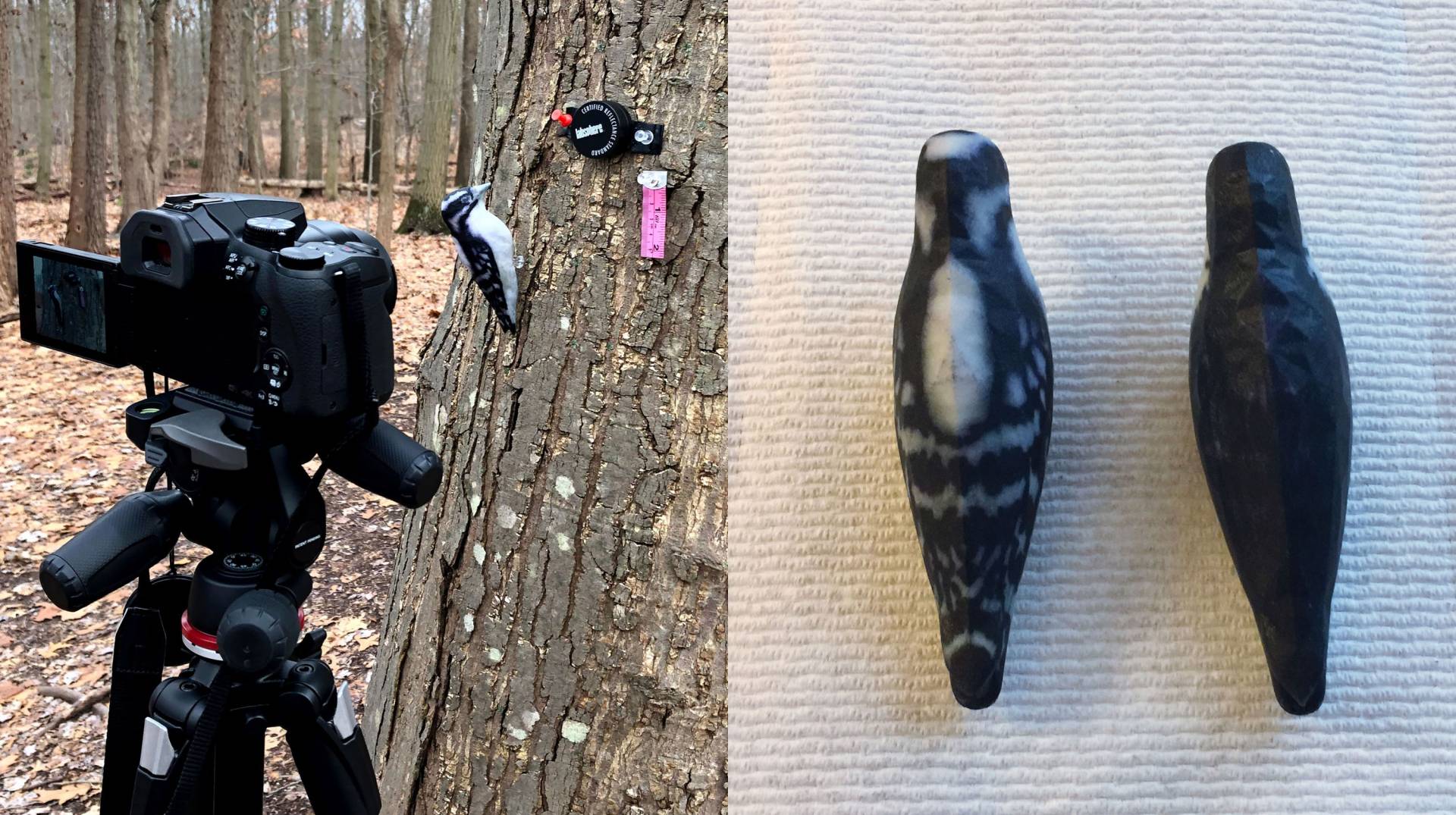 For his senior thesis research, Kawalec attached model downy woodpeckers — both with and without white dorsal patterns — to trees in a local park, then had volunteers find them and record their distance from the models when they did. Models with dorsal speckles were harder to spot from a distance. Kawalec also photographed the models on trees to analyze how the actual birds’ plumage pattern may act as camouflage. He found that the pattern on downy woodpeckers most likely serves to hide their outline, similar to a cheetah's spots.

By tracing and studying the outlines of his model birds, Kawalec determined that downy woodpeckers likely benefit from disruptive coloration, their contrasting white spots and dark plumage breaking up their outlines amid the tree-bark patterns and dappled sunlight of the forest.

“The first thing I did with Monica was tracing bird cutouts of woodpeckers she could use in another study,” said Kawalec, who is going on to pursue a Ph.D. in environmental science with a focus on host-parasite dynamics and climate change at the University of Toronto under Péter Molnár, an assistant professor of biological sciences and past postdoctoral researcher at Princeton.

“The last analysis I did of my photos, I was tracing the outlines of the birds to look for disruptive coloration,” he said. “It’s cool how it all came full-circle.”

Each year, the High Meadows Environmental Institute (HMEI) supports senior thesis research by students from departments across the University. This story is part of a series exploring the disciplinary variety of HMEI-funded undergraduate research carried out by members of the Class of 2021. Additional stories can be found on the HMEI website.