Knowing the temperatures that viruses, bacteria, worms and all other parasites need to grow and survive could help determine the future range of infectious diseases under climate change, according to new research.

Princeton University researchers developed a model that can identify the prospects for nearly any disease-causing parasite as the Earth grows warmer, even if little is known about the organism. Their method calculates how the projected temperature change for an area would alter the creature's metabolism and life cycle, the researchers report in the journal Ecology Letters. 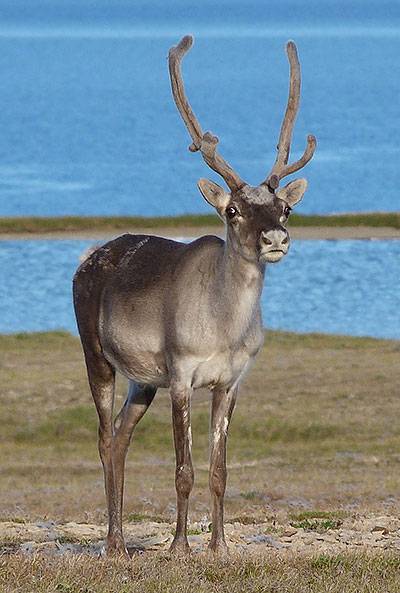 Princeton University researchers developed a model that can help determine the future range of nearly any disease-causing parasite under climate change. The framework calculates how projected temperature change would alter the creature's metabolism and life cycle. The researchers tested their model on a species of nematode, or roundworm, that lives in the Arctic and primarily infects caribou (above). As Arctic temperatures increase, the parasite's infectious season could split from what is now a continuous spring-to-fall transmission season into two longer fall and spring seasons separated by a hot, unlivable summer. (Photo by Susan Kutz)

Lead author Péter Molnár, a Princeton postdoctoral researcher of ecology and evolutionary biology, explained that the technique is an all-inclusive complement to current methods of predicting how climate change will affect disease, which call for a detailed knowledge of the environmental factors a specific parasite needs to thrive. But for many parasites, that information doesn't exist.

The more general Princeton model is based on the metabolic theory of ecology. Under this premise, all biological organisms need a balance between body size and body temperature to maintain the metabolism that keeps their organs functioning. Like any cold-blooded creature, disease-causing parasites rely on external temperatures for this balance. Scientists with knowledge of a parasite's body size and life cycle could use the Princeton metabolic model to predict how the organism would fare in altered climates.

"Our framework is applicable to pretty much any parasite, and utilizes established metabolic patterns shown to hold across a wide variety of species," Molnár said.

"It would be impossible to ever gather enough data to develop a separate climate-change model for each existing and emerging disease in humans, wildlife and livestock," Molnár said. "With our physiological approach, many of the parameters for a specific pathogen can be predicted based on what is known about metabolic processes in all parasites, so that the model remains applicable to new and less-studied species as well." 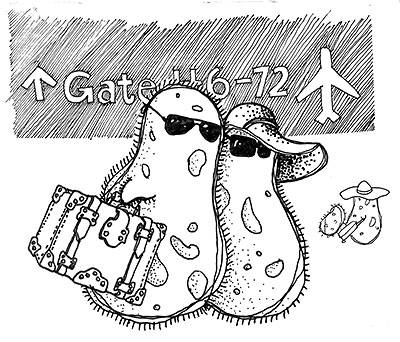 The researchers estimated the "fundamental thermal niche" of a parasite, the area between the lowest and highest temperature in which a specific parasite prospers. An organism already living at the high end could die out when things heat up. Parasites lingering at the low end could extend to new areas, which would expose human and animal populations to new diseases. (Illustration by Matilda Luk)

The Princeton model estimates the "fundamental thermal niche" of a parasite, the area between the lowest and highest temperature in which a specific parasite prospers. The researchers show that an organism already kicking around the high end of that range could die out when things heat up, while a parasite lingering at the low end could lead to novel epidemics in host populations and extend to new areas.

Because global temperatures will still differ by elevation and distance from the equator, some parasites also might "migrate" from their previous territory — rendered inhospitable by higher temperatures — to one more inviting. That could expose human and animal populations to new diseases to which they may have little natural resistance. Thus, having an idea of which areas a parasite might transition to is important, Molnár said.

Ryan Hechinger, a biologist at the University of California-Santa Barbara, said the framework adds to recent research tempering the fear that infectious diseases will uniformly flourish as global temperatures rise. Hechinger, who focuses his research on parasite ecology and evolution, is familiar with the work but had no role in it.

What affects the parasite affects the host. The researchers will broaden their model to better understand what toll a boost in parasite population could have on hosts such as muskoxen herds (above). A nematode with a penchant for the lungs of muskoxen recently expanded its range in the Arctic. (Photo by Susan Kutz)

In addition, Hechinger said, the Princeton technique applies to any parasites that venture outside of a warm-blooded host, including organisms that plague humans, such as Plasmodium, the microorganism that causes malaria.

"If the parasites have stages when they are loose in the environment, they will be impacted by temperature. This goes for parasites with developmental stages in cold-blooded hosts because those hosts are affected by environmental temperatures," Hechinger said.

The Princeton model could potentially appertain to those disease carriers as well, Molnár said. The framework could predict the future ranges of cold-blooded animals for use in combating invasive species, or even in the conservation of such animals as reptiles and amphibians, he said. 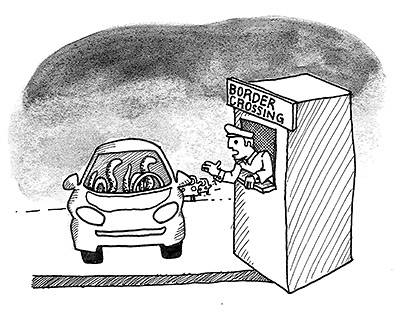 A regional climate that now prohibits range expansion for a parasite could change to become more hospitable and open up new "territory" for infectious diseases. The researchers report that as a parasite's metabolism varies with temperature, life-cycle components such as mortality, development, reproduction or infectivity may also vary with temperature. If the temperature dependence of a specific parasite such as the nematode (illustrated above) is known — or the temperature dependence of its life-cycle components — the Princeton model uses these temperature effects to evaluate the impact of climate change on parasite fitness, and thus the regions in which the parasite may occur in the future. (Illustration by Matilda Luk)

Molnár worked with senior researcher Andrew Dobson, Princeton professor of ecology and evolutionary biology, as well as with second author Susan Kutz, an associate professor of veterinary medicine at the University of Calgary, and Bryanne Hoar, a graduate student in the Kutz lab.

The researchers tested their model on Ostertagia gruehneri, a species of nematode, or roundworm, that lives in the Arctic. Among the world's most widespread parasites, the larval stages of parasitic roundworms are free-living in the environment or utilize a cold-blooded intermediate host, while the adult stages live within their final hosts, and may cause conditions such as trichinosis.

Hoar and Kutz had reared O. gruehneri larvae in various temperatures, and recorded their development and survival. Molnár and Dobson found that these observations correlated extremely well with how their metabolic model predicted the species would respond to increased Arctic temperatures. Under future conditions, the parasite's infectious season could split from what is now a continuous spring-to-fall transmission season into two longer fall and spring seasons separated by a hot, unlivable summer.

While the seasonal life of a nematode might seem trivial, what affects the parasite affects the host, Molnár said. The researchers are broadening their model to gauge how O. gruehneri's new active seasons would alter the relationship with its primary host, the caribou. They also are investigating the recent range expansion of a nematode with a penchant for the lungs of muskoxen, a wooly bovine native to the Arctic.

Molnár and his colleagues want to know what further population growth could be expected from these parasites as the Arctic climate continues to warm, and the eventual toll that would have on caribou and muskoxen herds.

The paper, "Metabolic approaches to understanding climate change impacts on seasonal host-macroparasite dynamics," was published in the January 2013 edition of Ecology Letters. The work was supported by grants from the James S. McDonnell Foundation, Alberta Innovates and the National Science and Engineering Research Council of Canada.