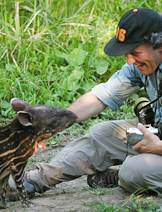 In addition to embarking on many research trips, ecologist Andy Dobson travels with alumni to share his expertise. While leading an alumni trip to the Peruvian Amazon, he had a close encounter with this baby tapir, an animal indigenous to the region.

Below left: Andy Dobson’s work takes him from the savannahs of Africa to the salt marshes of Baja California. Here, he captures himself in a mirror shooting a picture of a cheetah on the Serengeti Plains in Tanzania.

For a jeans-wearing environmentalist, Andy Dobson talks a lot like an economist — and, for that matter, a physicist, a computer scientist and a mathematician.

It takes a few minutes of listening to his ecology course’s kickoff lecture to realize he is as passionate an environmentalist as any — just one who has seen the value of embracing the perspective from all of these fields.

“What if we consider the environment economically?” he asks rhetorically to a room filled primarily with third-year science majors. “How do we quantify the ‘goods and services’ we get from a species — not just the aesthetics of a beautiful bird, but the clean air from the tree it’s sitting in? What about the plants sucking carbon dioxide out of the air, and their contribution to the fight against global warming? These are the issues we have to confront if we are ever going to develop computer models of what’s really happening in the environment. We need to take a hard look at the numbers.”

This hefty dose of math, models and natural history minutiae is a wakeup call to his students that the science of ecology has taken a leap into the electronic age. When Dobson is not out gathering firsthand data on plant and animal interactions in the savannahs of Africa or the salt marshes of Baja California, he spends a fair amount of his time trying to develop simulations of these interactions that play out in the silicon environment of a computer chip. By combining data and theory, he produces scenarios that trace ecological issues over the years and offers possible solutions to long-term problems.

From bird eggs to parasites

Dobson, a professor of ecology and evolutionary biology, said that the natural history side of the science is what first interested him in the field.

“When I was growing up in Scotland back in the 1960s, our school had a marvelous collection of British birds’ eggs that I spent weeks systematically measuring. I was trying to understand the evolutionary factors that determined differences in their geometry,” he said. “Then I went to England to study at Imperial College London, and the zoology lectures I attended in my first year really crystallized the idea that most of the world’s big problems had ecological roots: habitat loss, water supply, pests, pollution and disease. Sir Richard Southwood’s lectures emphasized the quantitative approach, and the urgency of addressing these issues; since then I’ve continuously tried to find new ways of applying these lessons.”

After receiving a bachelor’s degree from Imperial College, Dobson earned his doctorate from Oxford University. He returned to Imperial as a postdoctoral fellow, studying competition between parasites in wild animal populations. In 1983, he came to Princeton as a NATO Postdoctoral Research Fellow to continue his research on parasites with Bob May in the biology department. He was a faculty member at the University of Rochester from 1986 to 1990, and then returned to Princeton as an assistant professor.

Now, by employing the same tools that have improved our understanding of the smallest subatomic particles and the largest weather systems, Dobson and his colleagues are clarifying the interactions among the diverse life forms on the planet’s surface, and the complex web of predation and disease that unites our species with the rest. Quantifying these interactions is enabling ecologists to better communicate their effects with people outside the field, but it is not an easy matter.

“Ecology is ultimately going to prove harder than physics,” Dobson said. “The modern-day ecologist needs to employ the same set of tools as physicists, but in an arena that is both closer to human well-being and ultimately more complex. Physicists only have a few dozen different ‘species’ of particles to fit into their models, while even simple ecosystems have several hundred different animal and plant species interacting on a diversity of different time scales. Complicating our picture is the fact that, like physicists, we have to consider things that are very small with very fast dynamics, which may have a fundamental impact on the big picture.”

In the case of ecology, these tiny things are parasites and pathogens, creatures that turn the traditional food chain on its head. While predator-prey relationships — such as lions hunting for wildebeests on the Serengeti — are a staple of television programs on the natural world, the physically largest hunters are often the most vulnerable prey for the smallest organisms. Ecologists like Dobson are finding that the effect of pathogens on the food web may be both the most pervasive and underappreciated factor in the way species interact.

“Twenty-five years ago, people thought diseases were just a random event,” he said. “There was a lack of appreciation for the idea that diseases are a natural, and perhaps the most dominant, force in nature. But while predation is a one-off event, every living organism is in a constant battle with a diversity of pathogens attempting to eat it from the inside out.” 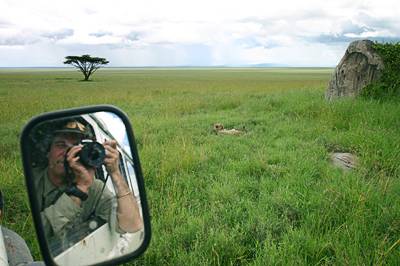 A look at the gastrointestinal tract of a lion — itself a diverse ecosystem teeming with viruses, protozoa, bacteria and worms — provides an example. Many of these have struck a bargain with the animal’s digestive system and coexist peacefully with its army of cellular defenses, while others are aggressively using the host as a food source to fuel their own reproductive efforts.

“When a lion attacks a wildebeest, it’s almost instantaneous,” Dobson said. “While infection with a pathogen is also instantaneous, the impact on the lion can take a number of different directions that affect both the welfare of the lion and the virus. A virus can mutate in a matter of hours, and undergo major genetic shifts in a couple of years! But its heavy dependence on its host for survival means that the presence of a single infected lion can also have a major effect on an entire population. A single disease outbreak in the Serenegti can reduce the lion population by up to a third.”

As a result of infection, the lion could simply die, which would remove it from the ecosystem, or it could spread the disease to other lions, or even other species, leading to cascading effects throughout the food web. Alternatively, if lions selectively prey on wildebeest that are infected with pathogens, then this prevents onward transmission and the presence of the lions can actually increase the health of the wildebeest population. It’s a complex set of possible outcomes and provides one example of why quantitative models are needed, said Robert Holt, who has known and collaborated with Dobson for many years.

“To understand what’s happening, you need models that track things that occur simultaneously,” said Holt, a 1973 Princeton alumnus who holds the Arthur R. Marshall Jr. Chair in Ecology at the University of Florida. “The impact of predation on infected individuals, on susceptible individuals and on patterns of transmission is not easy to understand. Andy and I are finding that mathematical models are crucial for tracking how these effects play out through time and space.”

Another set of binoculars

The theoretical nature of Dobson’s work attracts students like Devan Darby to his classroom. Darby, who graduated last year, found Dobson’s work with the spread of diseases to be particularly stimulating.

“The ecology of epidemics has interested me for a long time, and Andy was right up my alley as both a teacher and a person,” she said by phone from Gaborone, Botswana, where she currently serves as a Princeton in Africa Fellow studying HIV therapies. “He likes to put you through thought experiments that can help you build better models down the line.”

For example, Dobson would pose questions such as what would happen if cholera in the water of the local river was the major source of new cholera cases, and how transmission would be influenced by changes in rainfall and river flow. She would then try to factor these effects into her model to see how river flow influenced the actual progression of past cholera epidemics, which have been well-documented in certain periods of history.

“He taught me to ask the right questions,” Darby said. “He’s quite an offbeat and whimsical person who likes to follow his curiosity wherever it leads him, all of which I think rubbed off on me. But as much as he travels to these exotic places, much of his kind of ecological work happens in the mind. He’s very much a theoretical ecologist working with math.”

Dobson said that perhaps the biggest challenge to teaching this quantitative approach is leaving the door open for the students with a more visceral love of natural history.

“I worry that the genuine natural historians will get turned off by the math,” he said. “It comes as a bit of a shock to some of the undergrads who thought they’d be hugging trees. Instead, they walk into my class and get an eigenvalue-hugging course.”

Seen appropriately, though, such advanced mathematical tools can give students another set of binoculars — a “macroscope” that can show them a longer and broader perspective of the environment they already love — and perhaps even give them more persuasive tools for protecting it, Dobson said.

“At present it’s trendy to say we can only protect the environment by quantifying its benefits. But the problem is that its most valuable aspects are the hardest to quantify,” he said. “You can put a price on an elephant’s ivory tusks, but that ignores the aesthetic value that people get from seeing elephants, or knowing that they help modify the constant transition between woodland and grassland in savannahs. But how do you judge the cost of clean air, or healthy African populations of humans and wildlife? It’s not straightforward, but understanding the mathematical interactions that allow the vital economic services provided by natural ecosystems to persist is one of the grand challenges of science in this century.”