Invading predators can devastate an ecosystem. In fact, a leading cause of extinction is the introduction of predators into an isolated system like an island or a lake. The destruction is usually blamed on the predator’s eating choices, but sometimes the key lies in the prey animals’ responses, according to an international team of researchers led by Princeton’s Robert Pringle.

“You really can’t understand predator-prey interactions — or how predators will affect biodiversity and ecosystems — without understanding the behavior of the prey,” said Pringle, an associate professor of ecology and evolutionary biology. “The ways in which prey change their behavior to avoid getting eaten is a hard thing to predict, but without understanding that, you can’t predict anything else. Most theory in ecology simply assumes that predators eat prey, end of story. The real world is more complicated. But it’s not so complicated that we can’t get to the bottom of it.” 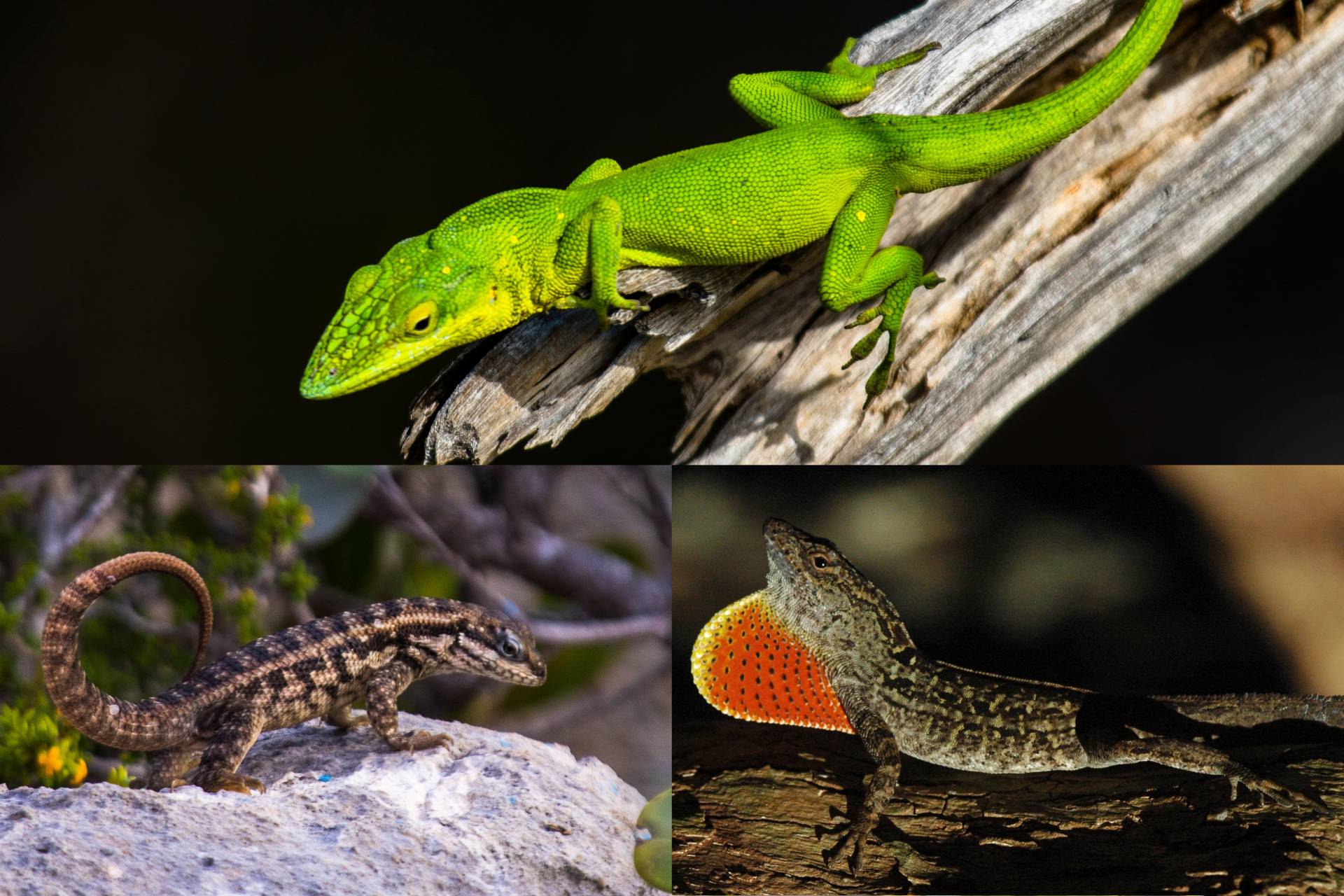 To study the impacts of invading predators, a research team led by Princeton's Rob Pringle used three lizard species: one predator, the curly-tailed lizard (Leiocephalus carinatus, bottom left), and two prey species, green anoles (Anolis smaragdinus, top) and brown anoles (Anolis sagrei, bottom right). They found that the anoles could coexist peacefully, with green anoles in the trees and brown anoles closer to the ground, but introducing predators drove the brown anoles into the trees, intensifying competition and undermining their ability to coexist. Their results therefore challenge the generality of the keystone-predation hypothesis and support refuge competition.

The question is rapidly becoming more pressing, noted co-author Rowan Barrett, the Canada Research Chair of Biodiversity Science at McGill University in Montreal, Quebec. “Human activity is increasing the occurrence of new predators being introduced to formerly isolated ecosystems,” he said. “Our work shows that the consequences of these predator invasions for biodiversity can depend strongly on changes in prey behavior that alter the way prey species use their environments.”

The researchers traveled to 16 small islands in the Bahamas that they used as experimental ecosystems. The brown anoles were established on all 16, and the researchers introduced the other two lizards separately or in combination.

“It’s so rare in ecology to be able to manipulate whole ecosystems — these little islands are kind of like big oceanic petri dishes that enable us to run really tight and compelling experiments,” Pringle said. “It’s just not possible to do that in most places.” 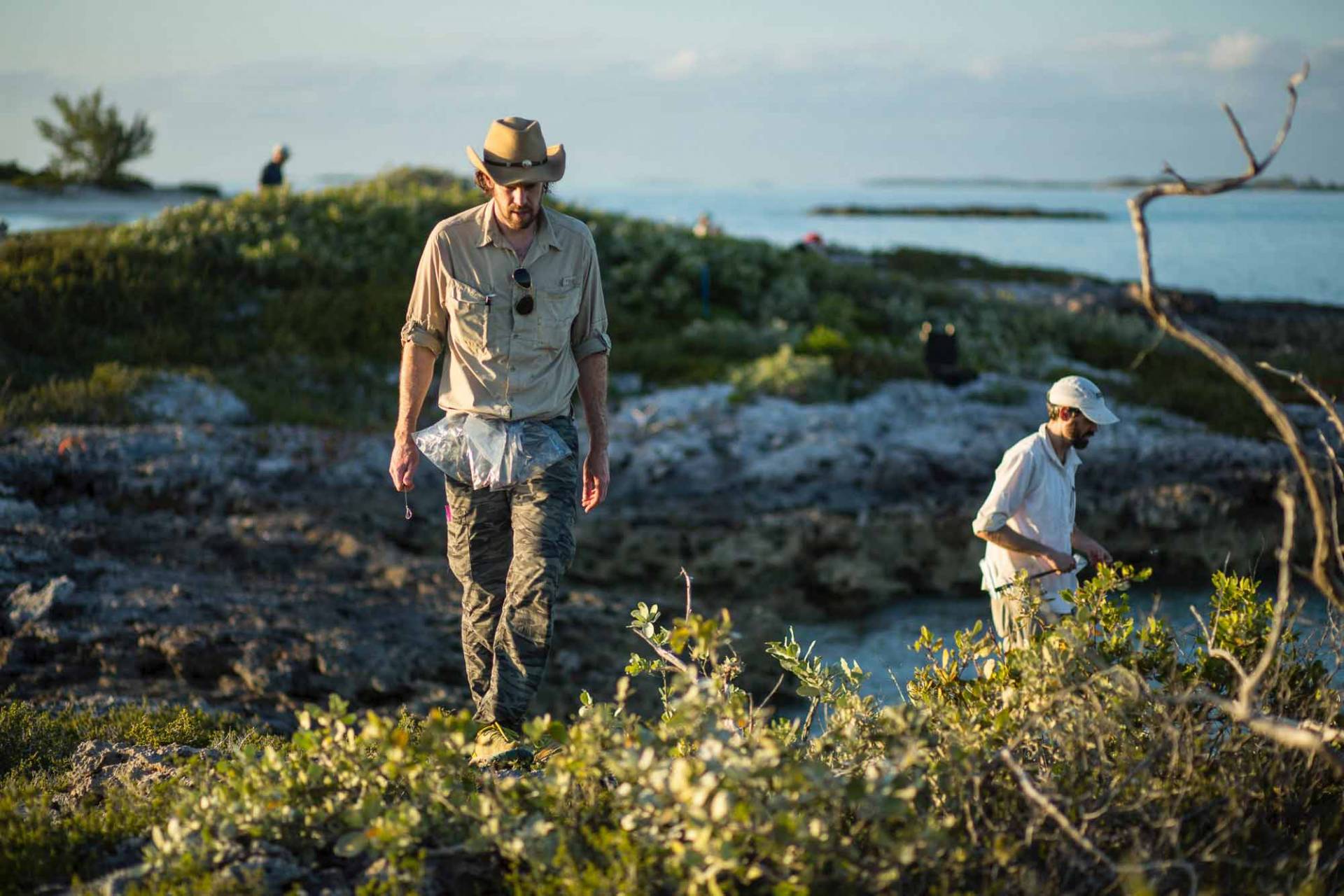 Rob Pringle (left) and Arash Askary of McGill University search a Bahama island for lizards to collect fecal samples for DNA metabarcoding. Pringle first conceived of this 16-island experiment in 2010 and introduced the green anoles (prey) and curly-tailed lizards (predators) in different combinations in 2011. He had a brief panic in 2013 when it looked like the green anoles would not establish populations on any of the islands. “I was very relieved when, in 2014, we started to see the pattern emerging, with the green anole populations exploding, but only on the islands without curly-tailed lizards.”

The researchers found that in the absence of predators, the two anole species coexisted just fine, with green anoles in trees and brown anoles living closer to the ground. The two species competed for insects, but the competition was “not severe,” Pringle said. But when the team introduced the curly-tailed predators, the brown anoles fled to the trees, where the chunky ground-dwelling lizard couldn’t follow. This intensified the competition between the two prey species for space and food, which undermined their ability to coexist. The results suggest that when prey can respond rapidly to the presence of a predator by changing their behavior, predators might typically reduce the ability of prey species to coexist.

“One of the key implications of our study is that the size of the refuges that prey have from predators can be really important for ensuring that prey don’t go extinct,” said Todd Palmer, a co-first-author at the University of Florida. “When there’s not enough room for prey to hang out without the constant risk of being eaten, something’s got to give, and that’s when we see species disappearing. Some of the more recent examples of catastrophic species extinction, such as the collapse of a really diverse group of fish species in the African great lakes, may have occurred in part because there simply wasn’t enough safe space in those ecosystems. So our findings not only give us some clues about how to manage future predator introductions, but also a better understanding of how past extinctions may have arisen as well.” 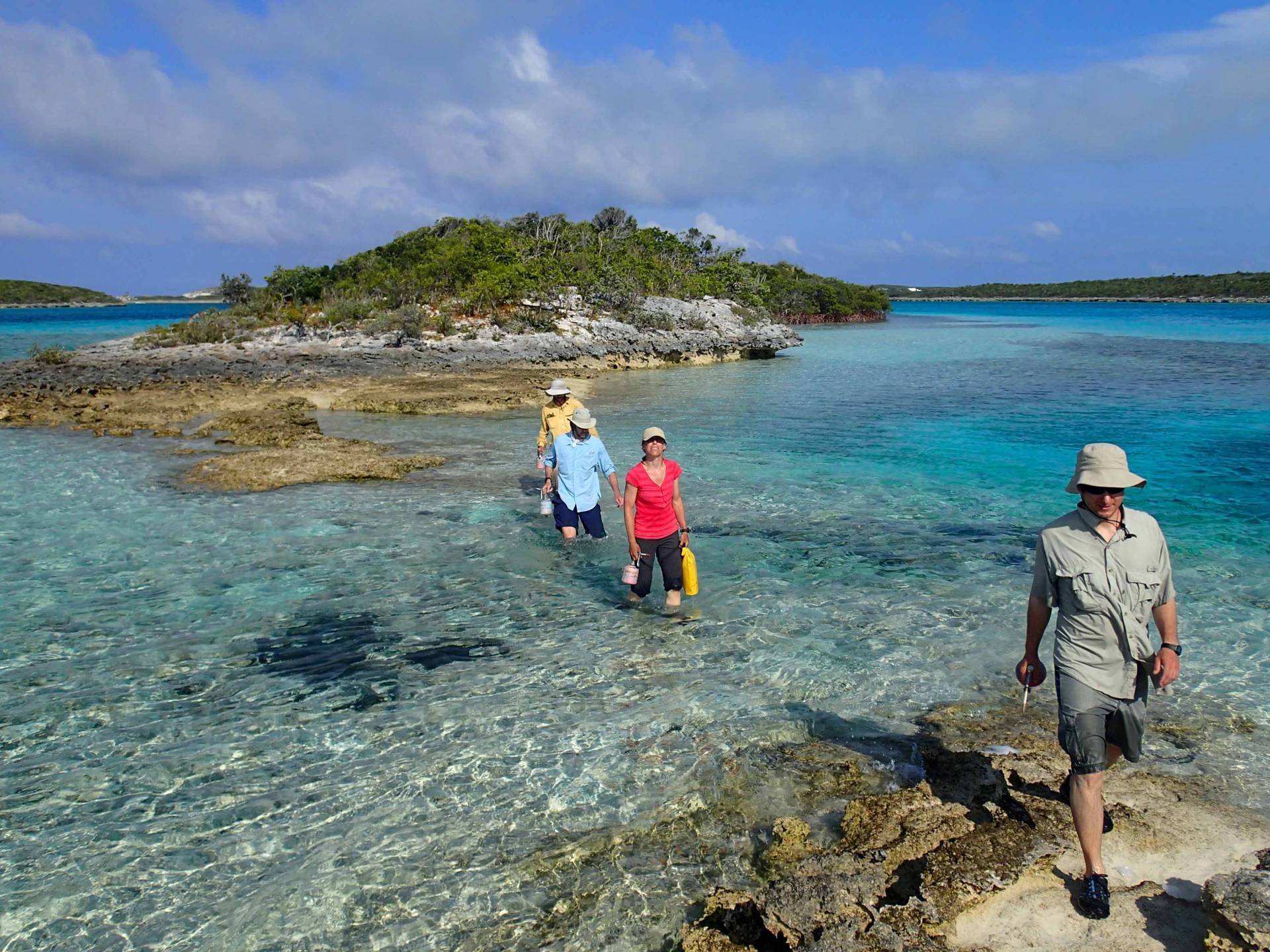 Scientists have long known how important “keystone predators” can be for healthy ecosystems. According to the keystone predator theory, top predators can prevent any one prey species from becoming too abundant and outcompeting all the other prey species, which should generally increase the diversity of the species at low levels of the food chain. While this study does not overturn this concept, it does highlight that an ecosystem with a top predator will not necessarily be more diverse than one without a top predator.

“Predators can reduce the diversity of prey species,” said Pringle. “That’s not ‘good,’ and it’s not ‘bad’ — it is what it is. The important thing to me is that we understand how and why predators have the effects that they do, so that we can predict what will happen when ecosystems gain new predators through invasions or when they lose existing predators through extinctions. That is really what our study was aiming to do. It’s not a morality play. There’s no good and no evil. We’re just trying to get a clear understanding of the biology.”

Scientists still don’t fully understand all the ways introduced predators affect resident prey species. In some cases, of course, an introduced predator can devastate prey populations by simply eating them up. But prey can also respond to predators in ways that reduce their likelihood of getting eaten — like hiding in trees, as the brown anoles did. There, the risk of predation is low, but then these areas become crowded, and competition becomes intense. This leads to the opposite outcome from the classical keystone predation scenario; Pringle’s team called it “refuge competition.”

“After six years of population monitoring, we found that curly-tailed lizards destabilized coexistence of the competing prey species by forcing brown and green anoles to share the same predator-free refuges and intensifying competition between them, leading to the extinction of some populations,” said McGill’s Barrett. Their results therefore challenge the generality of the keystone-predation hypothesis and support the refuge-competition hypothesis in this environment, he said. 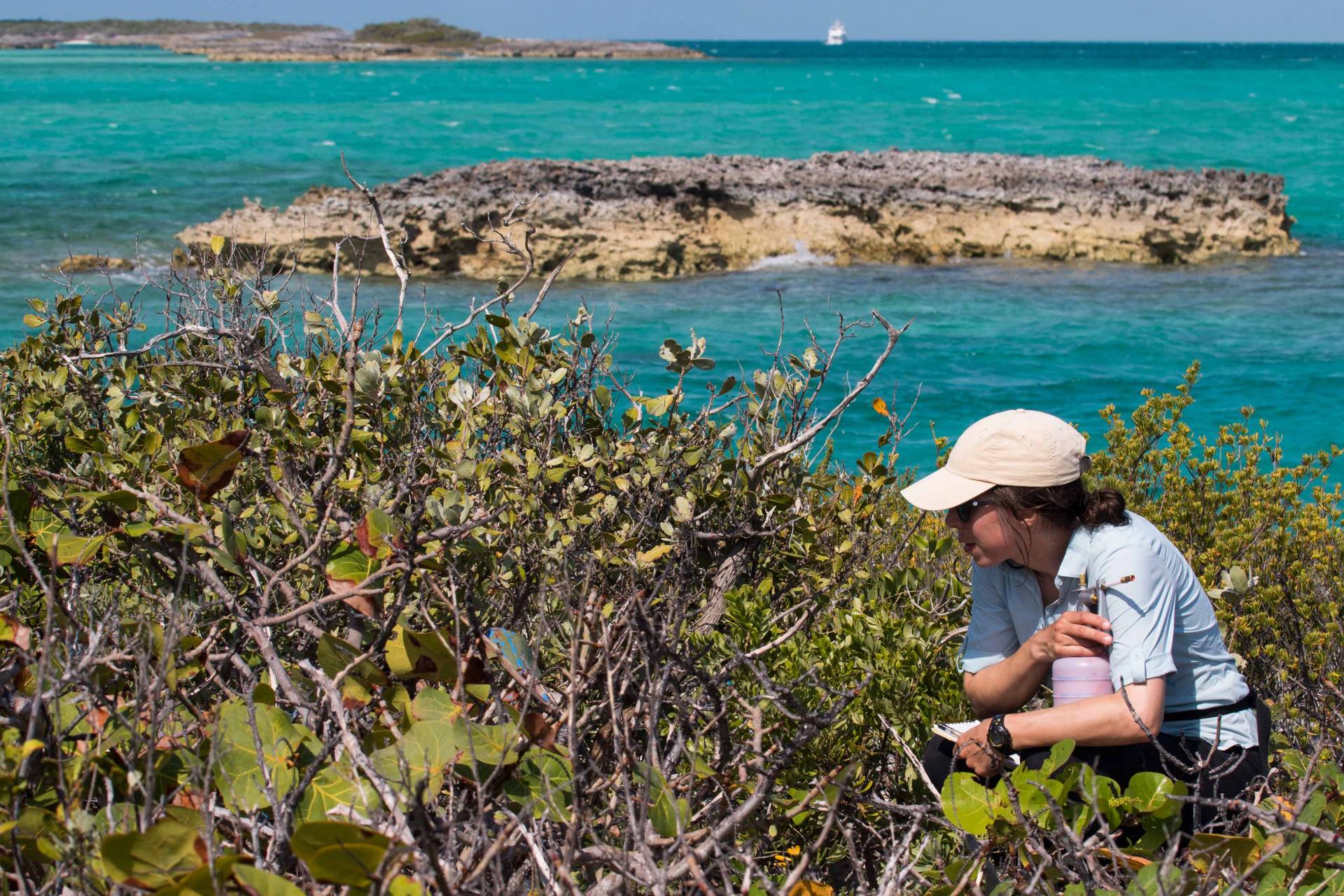 Man in ’t Veld conducts a lizard census with a squirt bottle full of red paint. The field work was not the tropical vacation that many imagine, Pringle said. “You tell people that you have a research project in the Bahamas, and almost everybody has this sarcastic reaction — ‘Oh, tough life!’ But the fact is, this project has been the most grueling, most uncomfortable and physically demanding work I’ve ever done: crawling around on our hands, knees and bellies through really thick vegetation on really sharp limestone rocks in 90-degree heat. We had lots of cuts and bruises. Some of us got stitches. I’m definitely not complaining. We’re so lucky to be able to do work in the field anywhere, and this is not just a spectacularly beautiful place, but also one that offers unique opportunities to do really elegant experimental research. It’s been a blast. But it’s always been funny to me, the contrast between what people imagine when you say that you work in the Bahamas and the nature of what the work is really like.”

The researchers wanted to dig deeper than simple population surveys, so they conducted DNA metabarcoding on fecal samples from each lizard species, to analyze their diets. DNA metabarcoding, a powerful tool that uses short fragments of fecal DNA to identify the prey species eaten by a predator, showed how the lizard species were competing for food on the islands. The researchers also used stable-isotope analysis to analyze how the experimental treatments affected the length of the food chains on the islands and the position of each species in the food chain.

Taken together, these techniques allowed the researchers to understand their results much more deeply, said Pringle. “A lot of times, you’ll run an experiment in the field and get some results, but you won’t necessarily understand why you got those results — you might have a best guess or a favored hypothesis, but it’s often a bit ambiguous,” he said. “It’s been a goal of mine for a long time to integrate new techniques like DNA metabarcoding with established techniques like muddy-boots field experiments to try to get more insight into mechanism. In this study, we really wove all these elements together over the course of the six-year experiment, and that is very satisfying.”

Pringle shares co-first-authorship with Tyler Kartzinel, a former postdoc in his lab who is now at Brown University, and with UF’s Palmer. Other Princeton co-authors are graduate student Matthew Hutchinson and graduate alumni Tyler Coverdale (Ph.D. 2018) and Josh Dakin (Ph.D. 2017). Undergraduate Lauren Wyman (Class of 2014) contributed to the fieldwork, and she and Annie Ferlmann (Class of 2016) both did senior theses using data from this project.

“Dr. Pringle was able to mimic naturally occurring introductions of new competitors and predators and then track what happens in real time,” said Jodie Jawor, a program director at the National Science Foundation, which funded this research. “This is a rare and valuable test of what happens to communities when new species are introduced. … Habitats and the composition of animal communities can change for various reasons — natural disasters, development, construction — so this work helps us understand the ecological impacts and potentially address them proactively and more fully informed.”