A Princeton University-led research team is the first to have documented that different populations of the same animal species respond differently with fever when fighting infection in the wild.

The research, which used radio transmitters to record fever and sickness behaviors in song sparrows, may help scientists predict the locations where diseases carried by animals are most likely to take hold. Researchers may one day be able to forecast where infections -- including those that can have serious effects on humans, such as West Nile virus -- will spread. 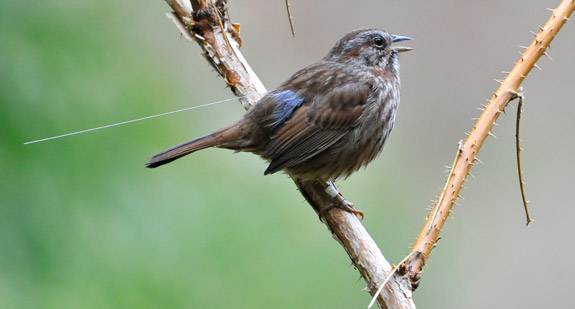 For the research, North American song sparrows were outfitted with transmitters for measuring body temperature and sickness behavior, such as lethargy. (Photo: Kamiel Spoelstra)

Fever occurs in animals when the immune system elevates body temperature to make the internal environment less hospitable to pathogens and to increase the likelihood of fighting off infection. Laboratory studies, in which the immune responses of animals can be observed in detail, have shown that fever responses can vary strongly not only among species, but among individuals of the same species. Additionally, previous studies of wild vertebrates have found differences in immune responses among populations at different latitudes, but these have been limited to mild reactions, such as antibody responses, which are most likely less effective than fever during the early stages of an infection.

Scientists have puzzled over why organisms differ in how strongly they defend themselves against infection. New theories presume that immune responses are "costly" to animals because they compete with other energy-consuming processes, such as partner selection, territorial behavior and reproduction. Since individuals have limited resources and energy, they must make trade-offs, which could explain why animals in different conditions respond differently to invading pathogens. But efforts to test these theories have been hampered by the difficulty of recording immune responses in wild animals.

In assessing sickness behavior, the researchers observed how the sparrows reacted to recordings of other sparrows singing, including how many songs were issued in response to song playback and whether the animals flew at the speaker. Hear a recording (.mp3).

Now, with the help of advances in radiotelemetry, a team of ecologists led by Princeton graduate student James Adelman has succeeded in measuring fever and sickness behavior in various populations of North American song sparrows living in the wild. The results were published March 31 in the journal Functional Ecology. Adelman’s colleagues included Princeton graduate student Sergio Cordoba-Cordoba, former Princeton faculty members Martin Wikelski and Michaela Hau and former Princeton postdoctoral researcher Kamiel Spoelstra, all of whom are now at the Max Planck Institute for Ornithology in Radolfzell, Germany.

"This study represents a major step forward in our ability to study immune responses in wild animals and to increase our understanding of the causes and consequences of variation in immune function in nature," Adelman said.

Using mist nets that do not harm the animals, the scientists trapped groups of sparrows in Southern California and Western Washington. To stimulate the immune response, half of the birds in each group received a small injection of bacterial cell walls, which causes fever for a limited period of time, typically around one day. The other half of each group was left untreated. A small transmitter was attached to the backs of all of the birds before they were released into the wild. Weighing a little more than a paperclip, the skin-mounted transmitters sent data about the birds’ body temperatures and activities for the next 20 hours.

For a bird that weighs about 20 grams, which is less than an ounce, and has an average body temperature of 40 to 41 degrees Celsius (104 to 106 degrees Fahrenheit) during the day and 38 to 40 degrees Celsius (100.4 to 104 degrees Fahrenheit) at night, an increase in body temperature of one degree is significant, and a rise of four degrees could be dangerous. Additionally, studies in other species have shown that these increases are quite metabolically costly, increasing energy used by 10 to 15 percent for every degree above normal.

Song sparrows have evolved to breed when days become long and warm. In Washington State, song sparrows have a short breeding season of around 100 days. For this reason, the researchers theorize, the sparrows probably need to invest the majority of their resources in reproduction because the investment of time and energy in the immune response could reduce their breeding success. In contrast, due to their longer breeding period of 150 days, the sparrows in Southern California may have more time to compensate for the use of valuable energy resources and therefore can give higher priority to the immune reaction.

"The work by Adelman and colleagues is truly exciting, multidisciplinary science," said Lynn Martin, a University of Southern Florida biologist who was not part of the research effort. "Not only do they use cutting-edge tools to characterize an important immune response in wild animals, they compare responses among populations and find variation that is predictable based on how organisms schedule their reproductive lives. … This discovery has many implications from predicting when and where new diseases might emerge to understanding seasonal cycles of disease in animal and even human populations."

In future research efforts, the team intends to explore whether the observed population differences in fever response reflect evolutionary changes at the genetic level or differences in environmental factors. The researchers also plan to assess the molecular mechanisms underlying the variations in immune response and determine whether these differences accurately predict the level of infection in the animals.

The work was supported by the National Science Foundation, Princeton University and the Max Planck Institute.

Biologist flies with the birds

Satellite system may give ecologists a bird's-eye view