Before wolves were reintroduced to Yellowstone National Park in the mid-1990s, they were vaccinated for common diseases and treated for any parasite infections they already carried. As a result, the first few generations of wolves were relatively disease-free, but over the years, various diseases have found their way into the population. 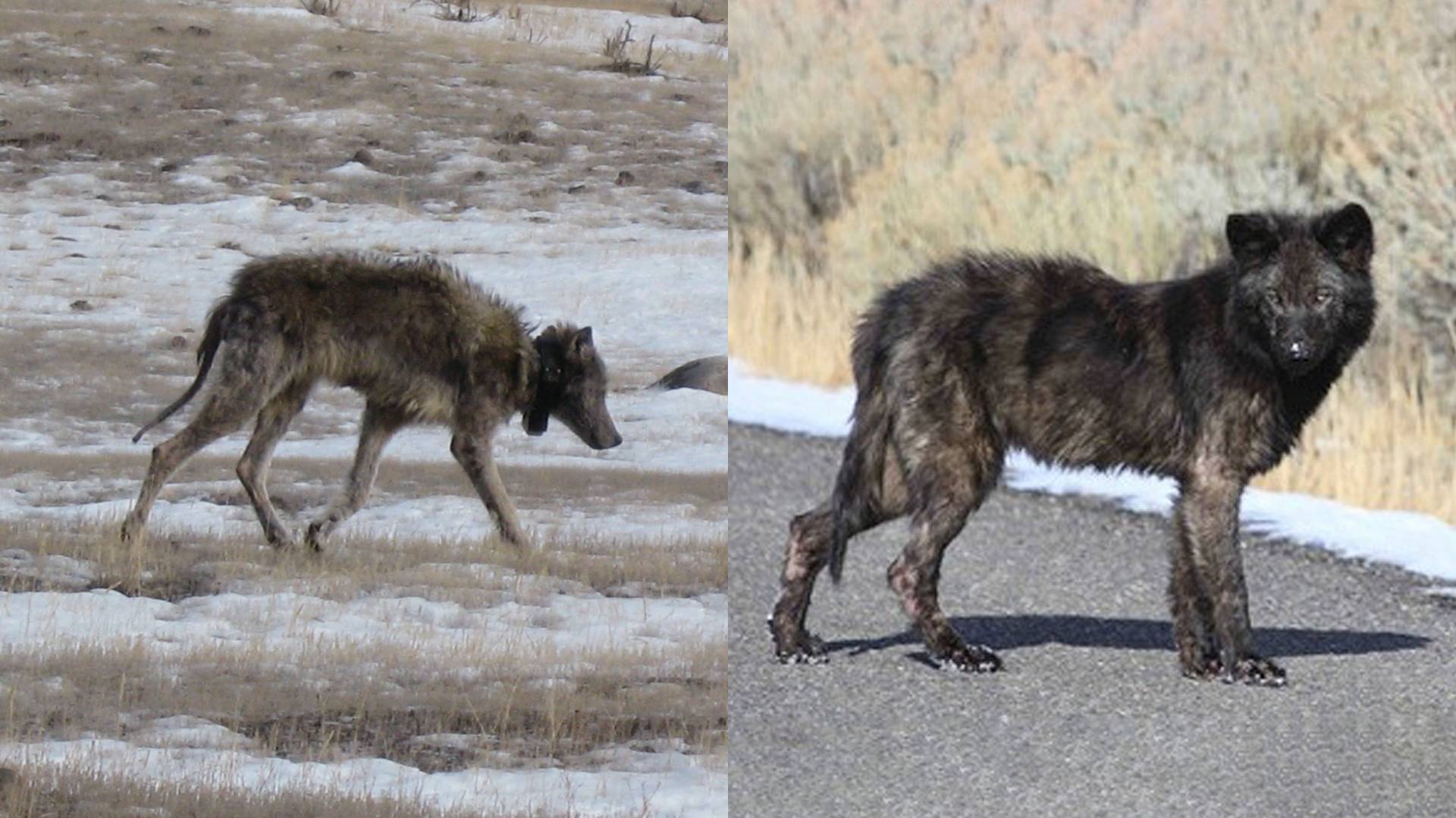 Both of these Yellowstone wolves display the hair loss and skin lesions associated with mange. By analyzing 25 years of wolf observations and genetic samples from 408 Yellowstone wolves, a Princeton-led research team found that genetics play a role in the severity of the mite-borne disease. They found support for the "monoculture theory": wolves with severe mange, like the one on the left, tend to have less genetic variation than wolves with mild symptoms, as seen on the right.

Sarcoptic mange, caused by the microscopic mite Sarcoptes scabiei, first crawled its way into the reintroduced Yellowstone wolves in 2007. Mange is characterized by itchy skin lesions and hair loss, but there is huge variation between individuals in terms of how sick wolves actually become — some experience mild mange symptoms and are able to clear the mites within a few months, while others experience massive hair loss, emaciation and secondary bacterial infections, and eventually die of the disease. Mange isn’t exclusively a disease of wolves, either. Sarcoptic mange mites infect more than 100 different mammalian species, including humans (where the disease is better known as “scabies”), and similar inter-individual variation in disease severity occurs in all of these host species.

Little is known about what causes the variation in manginess, but a team of researchers, led by then-Princeton graduate student Alexandra DeCandia, sought to uncover this mystery. Their study, published in Evolutionary Applications, brings together schools of thought from molecular biology, disease ecology and conservation biology.

“Genetics provide us with a really powerful tool for understanding wildlife health and conserving at-risk species,” said DeCandia, who completed her Ph.D. in 2020 and is now a postdoctoral researcher at the Smithsonian Conservation Biology Institute. “We can learn more about the causes of disease, the short- and long-term effects on individual animals and populations, and how best to respond as wildlife biologists and managers. For widespread diseases like mange, we can even gain insights into common processes that affect other host species — including our own — for a larger-scale ‘One Health’ perspective that ultimately improves both human and wildlife health.”

Though the researchers focused on wolves, the genetic pathways they uncovered will help pave the way for research into human scabies, which infects some 200 million people.

The premise of their research is based on a phenomenon known in agriculture as the “monoculture effect,” which predicts that the ability of individuals and populations to combat disease is related to genetic diversity. Individuals with higher genetic diversity are more resistant to disease, or more likely to experience mild disease, because they have more genetic tools with which to fight off diverse pathogens. Similarly, at the population scale, populations with higher genetic diversity may be less likely to experience disease outbreaks and more likely to survive outbreaks if they do occur.

Think of an agricultural monoculture. In a field of genetically identical bananas, for example, if a parasite is capable of infecting one banana tree, it has the tools needed to infect all of the banana trees. Of course, populations of wild animals are never monocultures, but they do vary in the amount of genetic variation they contain. And if the population in question originates from a small number of individuals, the amount of genetic variability available may be limited. Such is the case with the reintroduced wolves of Yellowstone National Park.

Leveraging over 25 years of wolf observational data and genetic samples from 408 individual wolves, the research team — led by DeCandia and her adviser Bridgett vonHoldt, an associate professor in ecology and evolutionary biology at Princeton University — looked for patterns in overall genetic diversity associated with mange: Is the degree of individual-level genetic diversity associated with disease severity? Are specific genes involved? How did the introduction of mange impact genetic diversity at the population level? Using their years of observations, the researchers analyzed the genetic results in the context of broader wolf biology to see how genetic variation interacts with other factors — behavioral, environmental and demographic — to determine mange severity.

In individual wolves, the researchers found support for their hypothesis: wolves with severe mange tended to have less genetic variation than wolves with mild symptoms. Additionally, the study identified 410 genetic variants that are significantly associated with mange severity. These variants are known to play roles in inflammation, immunity and skin barrier integrity, and could potentially be molecular targets for mange or scabies treatment in other host species. 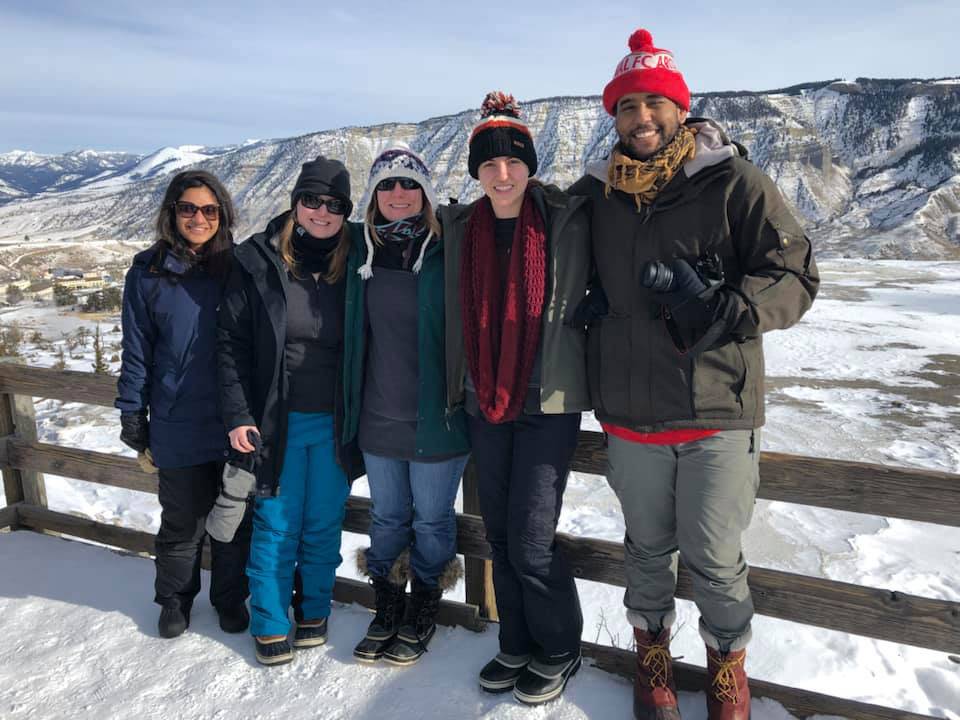 Professor Bridgett vonHoldt (center) is flanked by her graduate students in Yellowstone National Park in this photo from January 2019. From left: Dhriti Tandon, Elizabeth Heppenheimer, Alexandra DeCandia and Christopher Lawrence.

The researchers found that the best model of mange severity included not only genetic variation, but also took into account the age and breeding status of the wolf in question, and the season. Wolves tend to experience more severe mange in winter, when it is more difficult to thermoregulate; older wolves tended to have worse mange than younger wolves, although pups were not included in the study; and non-breeding wolves tend to be more mangy than breeders (though the direction of causation here is unclear — it could be their manginess that prevents them from breeding).

At the population scale, overall genetic diversity has decreased in the Yellowstone wolves over the years.

“Such changes in diversity are not unexpected,” said vonHoldt, the senior author on the study. “We have found that genetic diversity has been preserved well through mechanisms that shape pack and breeding pair formations. This recent opportunity to incorporate immunity and mange prevalence has really given us insights into the genetic dynamics shaped additionally by disease in a social carnivore.”

Interestingly, gene variants that are associated with more severe mange have become less common in the population since mange emerged in 2007. This finding indicates that the disease is placing strong evolutionary selection pressure on the wolf population, weeding out those wolves most likely to succumb to death from mange.

The findings are also significant for conservation biology, since maintaining healthy and genetically diverse individuals is one of the keys to conservation.

“Conservation genetics has traditionally relied on a handful of genetic markers to inform captive breeding or wild population management,” DeCandia said. “For species of conservation concern, this research highlights the importance of examining both summary metrics of genome-wide variation and specific genes associated with disease.”

In addition to DeCandia and vonHoldt, the other authors involved in the study were Edward Schrom, a 2020 graduate alumnus who is now a postdoctoral researcher at the National Institutes of Health; Ellen Brandell, a postdoctoral researcher at the University of Wisconsin-Madison; and Daniel Stahler, the lead wolf biologist at Yellowstone National Park.