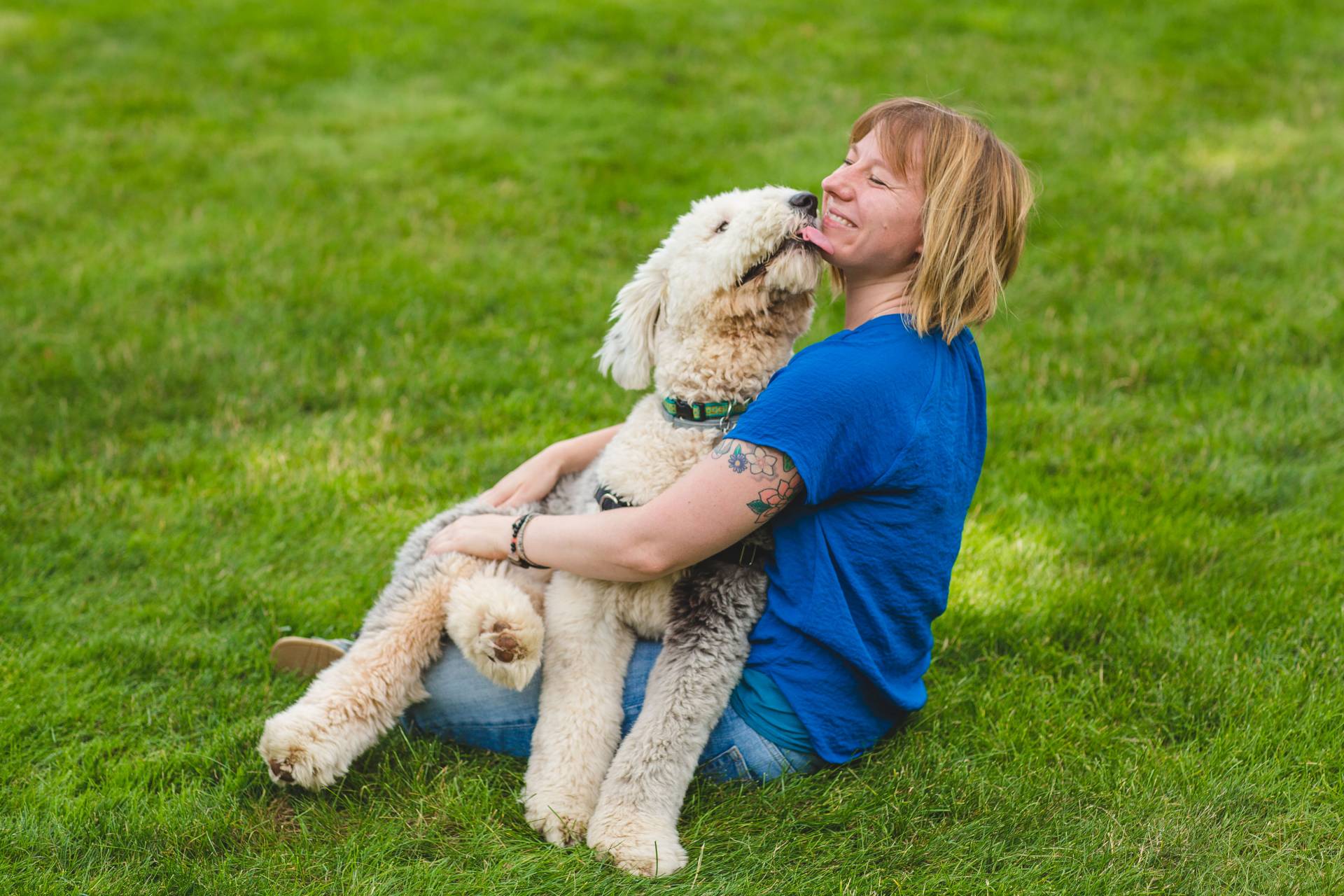 In a new study published in the journal Science Advances, an interdisciplinary team of researchers, including those from Princeton University, identified genetic changes that are linked to dogs’ human-directed social behaviors and suggest there is a common underlying genetic basis for hyper-social behavior in both dogs and humans. Shown here, Bridgett vonHoldt, an assistant professor in ecology and evolutionary biology at Princeton and the study's lead co-author, cuddles with her Old English Sheepdog, Marla.

Dogs' ability to communicate and interact with humans is one the most astonishing differences between them and their wild cousins, wolves. A new study published today in the journal Science Advances identifies genetic changes that are linked to dogs' human-directed social behaviors and suggests there is a common underlying genetic basis for hyper-social behavior in both dogs and humans.

An interdisciplinary team of researchers, including those from Princeton University, sequenced a region of chromosome 6 in dogs and found multiple sections of canine DNA that were associated with differences in social behavior. In many cases, unique genetic insertions called transposons on the Williams-Beuren syndrome critical region (WBSCR) were strongly associated with the tendency to seek out humans for physical contact, assistance and information.

In contrast, in humans, it is the deletion of genes from the counterpart of this region on the human genome, rather than insertions, that causes Williams-Beuren syndrome, a congenital disorder characterized by hyper-social traits such as exceptional gregariousness.

"It was the remarkable similarity between the behavioral presentation of Williams-Beuren syndrome and the friendliness of domesticated dogs that suggested to us that there may be similarities in the genetic architecture of the two phenotypes," said Bridgett vonHoldt, an assistant professor in ecology and evolutionary biology at Princeton and the study's lead co-author.

Dogs’ ability to communicate and interact with humans is one of the most astonishing differences between them and their wild cousins, wolves. Shown here, Lauren Brubaker, a graduate research assistant in the Department of Animal and Rangeland Sciences at Oregon State University and one of the study’s authors, interacts with a gray wolf.

VonHoldt had identified the canine analog of the WBSCR in her publication in Nature in 2010. But it was Emily Shuldiner, a 2016 Princeton alumna and the study's other lead co-author, who, as part of her senior thesis, pinpointed the commonalities in the genetic architecture of Williams-Beuren syndrome and canine tameness.

By analyzing behavioral and genetic data from dogs and gray wolves, vonHoldt, Shuldiner and their colleagues reported a strong genetic aspect to human-directed social behavior by dogs. Monique Udell, an assistant professor of animal and rangeland sciences at Oregon State University and the paper's senior author, collected and analyzed the behavioral data for 18 domesticated dogs and 10 captive human-socialized wolves, as well as the biological samples used to sequence their genomes.

First, Udell quantified human-directed sociability traits in canines, such as to what extent they turned to a human in the room to seek assistance in trying to lift a puzzle box lid in order to get a sausage treat below or the degree to which they sought out social interactions with familiar and unfamiliar humans. Then, vonHoldt and Shuldiner sequenced the genome in vonHoldt's lab and correlated their findings.

Consistent with their hypothesis, the researchers confirmed that the domesticated dogs displayed more human-directed behavior and spent more time in proximity to humans than the wolves. The also discovered that some of these transposons on the WBSCR were only found in domestic dogs, and not in wolves at all.

VonHoldt's findings suggest that only a few transposons on this region likely govern a complex set of social behaviors. "We haven't found a 'social gene,' but rather an important [genetic] component that shapes animal personality and assisted the process of domesticating a wild wolf into a tame dog," she said.

Anna Kukekova, an assistant professor in the Department of Animal Sciences at the University of Illinois at Urbana-Champaign who is familiar with the research but had no role in it, said that the paper points to these genes as being evolutionarily conserved, or essentially unchanged throughout evolution. "The research provides evidence that there exist certain evolutionary conservative mechanisms that contribute to sociability across species," she said. "That they have found that this region contributes to sociability in dogs is exciting." 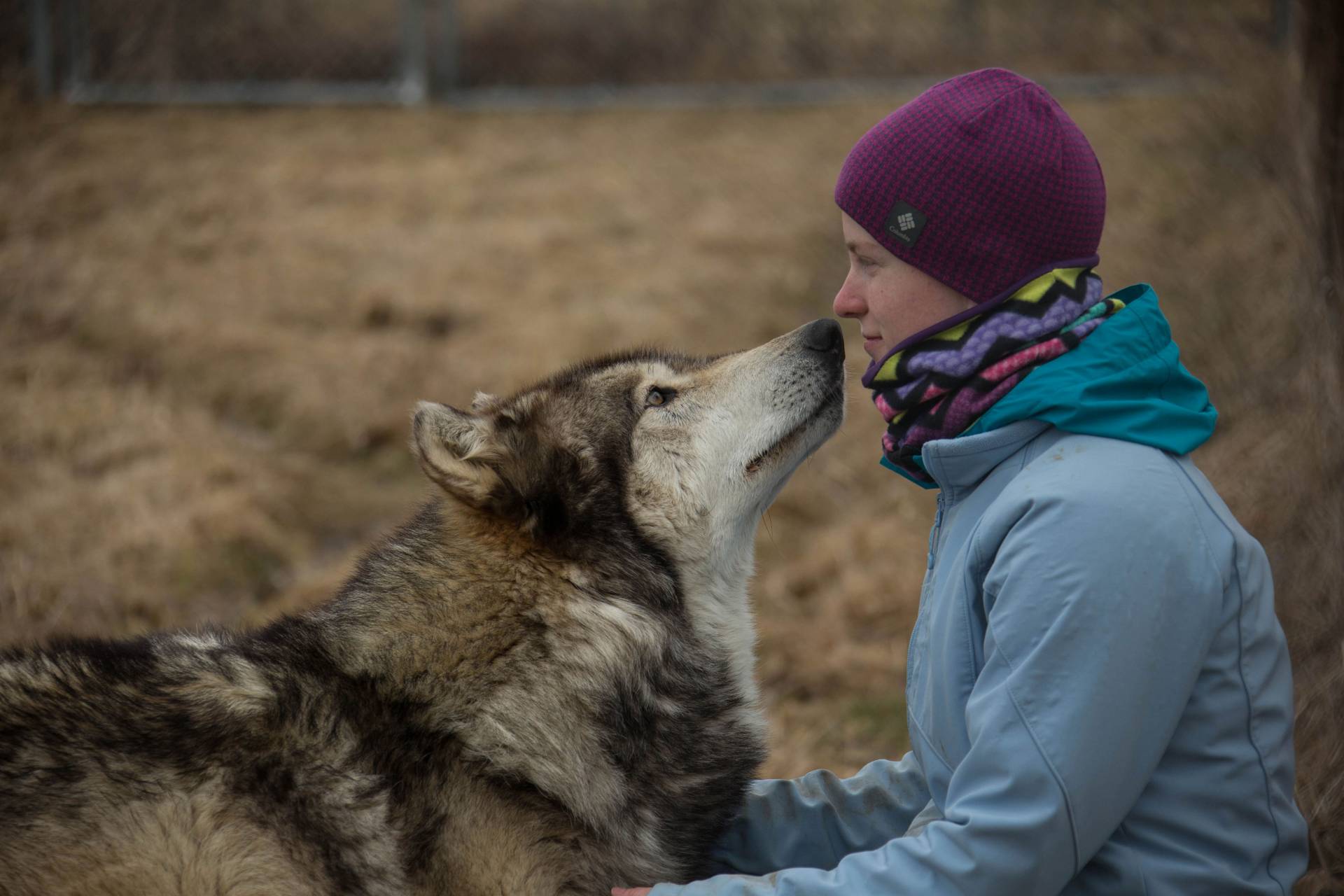 By analyzing behavioral and genetic data from dogs and gray wolves, vonHoldt, Shuldiner and their colleagues reported a strong genetic aspect to human-directed social behavior by dogs. Shown here, Shelby Wanser, an undergraduate research assistant in the Department of Animal and Rangeland Sciences at Oregon State University and one of the study’s authors, participates in an exercise to determine the degree to which canines seek out social interactions with familiar and unfamiliar humans.

Survival of the friendliest

The researchers' evidence also calls into question the role of domestication in the evolution of canine behavior. Most experts agree that the first domesticated dogs were wolves that ventured into early human settlements. These proto-dogs evolved not only in their looks, but also their behavior, a process likely influenced by the species' cohabitation, according to vonHoldt.

However, unlike previous research which suggests that, during the process of domestication, dogs were selected for a set of cognitive abilities, particularly an ability to discern gesture and voice, vonHoldt and Shuldiner's research posits that dogs were instead selected for their tendency to seek human companionship.

"If early humans came into contact with a wolf that had a personality of being interested in them, and only lived with and bred those 'primitive dogs,' they would have exaggerated the trait of being social," vonHoldt said.

The study, "Structural variants in genes associated with human Williams-Beuren Syndrome underlie stereotypical hyper-sociability in domestic dogs," was published July 19 by Science Advances. The research was funded in part by Princeton's Department of Ecology and Evolutionary Biology, Office of the Dean of the College, and Council on Science and Technology, as well as the National Science Foundation (NSF DEB-1245373, NSF DMS 1264153) and National Institutes of Health (NIH GM086887).